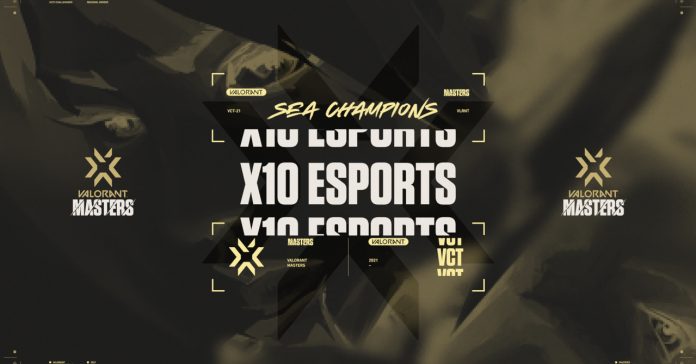 he Valorant Champions Tour 2021: SEA Stage 1 Masters happened over the weekend, and there, eight of the best Valorant teams in SEA faced off. After three days of action, Thai squad X10 Esports was crowned victorious in the finals after defeating Singapore’s Team SMG in a close 3-2 series.

What an amazing finish to this grand final, X10 Esports has brought home the champion title as well as pride to 🇹🇭 Thailand VALORANT fans!

X10 Esports started off their VCT Masters SEA journey by handily defeating Indonesia’s Team nxl 2-0 in the Quarterfinals. Following that series, X10 took another convincing 2-0 victory against Taiwanese squad KPC. This set the stage for the Finals against Team SMG.

In the first game of the Finals, SMG came out swinging as they took Game 1 13-15. X10 answered in the next game by winning 13-6. For Game 3, SMG built up a strong 11-1 lead heading into the second half, and while X10 tried to mount a comeback, SMG still took the third game.

Now down 2-1, X10 Esports was in big danger of losing the finals, especially as SMG led 9-3 at the end of the first half of Game 4. During the second half though, X10 mounted a successful comeback to win Game 4 and tie the series 2-2.

In the fifth and final game, X10 carried their momentum from Game 4 to eventually win the game 13-9, and the series 3-2.

Regarding their pivotal Game 4 comeback, the players of X10 Esports shared during the post-game conference that the team simply “played for fun” even when they were in a precarious position.