Feels better as a smartphone game too. 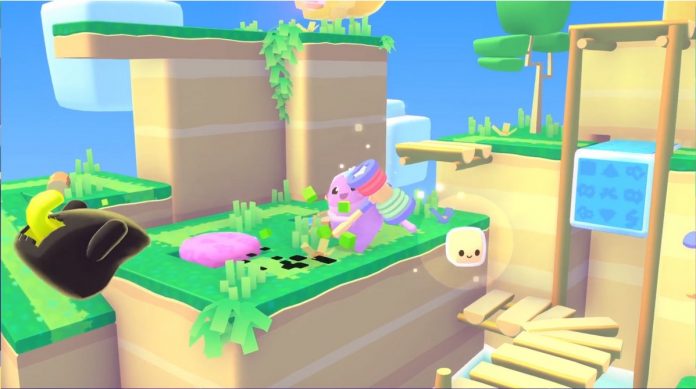 Melbits World is a co-op 3D puzzle-platformer released for gaming consoles back in 2019, and it revolves around the cooperation of the participants guiding the Melbits to safety. It also utilizes your mobile device as a controller since it requires the player to install the companion app to play the game.

The problem is, it narrows down the audiences that the game could appeal to as it requires a bunch of stuff to fully enjoy the game. Namely, you need a WiFi connection, mobile device, and friends to play with. Thankfully, Melbots Studio and AKG games finally moved the actual game to mobile devices, and I think it’s for the better.

To introduce us to the game’s story, Melbits World opens up with Eggie who is happily collecting seeds on a bright day, when suddenly, the sky turns black, after which Eggie learns that the Glitches stole the rune stones enshrined at the sacred monument. So it is up to Eggie to hop on different worlds to recover the rune stones to save the digital world. According to the game’s official page, Melbits are “happy and adorable” creatures living behind every online device, with a mission to spread good vibes throughout the internet.

Now that we know about the Melbits, let’s get right into the gameplay. By the looks of it, the core gameplay of the mobile version is practically the same as its console counterpart, with the player tasked to guide the Melbits through a block-like stage to a safe path hindered by many traps and enemies. You have to Tap, Swipe, Roll, and use your device’s gyro controls to control a certain contraption, each with its corresponding color.

Every stage is fairly simple, yet at the same time it can be nerve-wracking as you progress through the level. The game can be a bit dense in providing information about the mechanics, so you have to figure out what each Melbits can do. All this while minding the controls of each contraption, and the fact that the Melbits will eventually flood the stage, making things bit hectic. Even with these challenges, I felt that most of the game’s levels were still fairly straightforward. Although some may still find the game a bit boring considering how short and identical the levels are despite having a different theme in each world.

Unlike the console version, the mobile port does not require you to play with a friend. But if you really want to stretch it, you can share half of your phone’s screen with a friend, letting them take control of the other contraption. Overall, nothing changed with its core gameplay other than the fact that this port is more of a single-player experience.

Weirdly enough, Melbits World fits well as a mobile game rather than a full console game. The small design and puzzles with a fair length of 72 stages (currently) all in the comfort of your mobile phone makes it a decent time killer. Talking purely out of my experience with the game, just like what I mentioned before, every stage is easy and simple, but getting a perfect stage clear for all stage is a different story.

There are 3 seeds in every stage, and most of the time, these seeds are just waiting patiently for you to pick up. But some are well-placed, leaving me to wonder how to get them without killing some of my Melbits in the process. So, if you’re the kind of person who can’t stand the fact that the leaning tower of Pisa is tilted and still tilting, then you’ll definitely aim for a perfect stage clear without knowing you’re already playing for an hour.

Customization is also present with different kinds of hats and backpacks to collect that can be unlocked through progression. But the best and the cutest costumes must be purchased at the shop with a little microtransaction involved. Thankfully, these costumes are just purely aesthetics and do not yield any kind of bonuses, making the microtransaction part pretty much optional.

I can compare my overall experience with Melbits World to something like giving matching blocks to a child. Not because it’s that easy mind you, but rather because it’s simple yet will provide entertainment for a good amount of time. Considering the slight lack of difficulty of the game, some might find it too easy. Still, Melbits World is a good pick up to kill some time since the game can be played without the need to connect to the internet. Not to mention that trying to figure out how to get a perfect stage clear will take most of your time with the game.

Melbits World Review (Mobile) | A Cute and Fun Puzzle-PlatformerA good mobile download with its 72 stages of simple puzzles, Melbits World can take most of your time. Despite the fact that the majority of these challenges are easy to accomplish, it's still a good game to play during your break time as it does not require much of your attention compared to some mobile games.