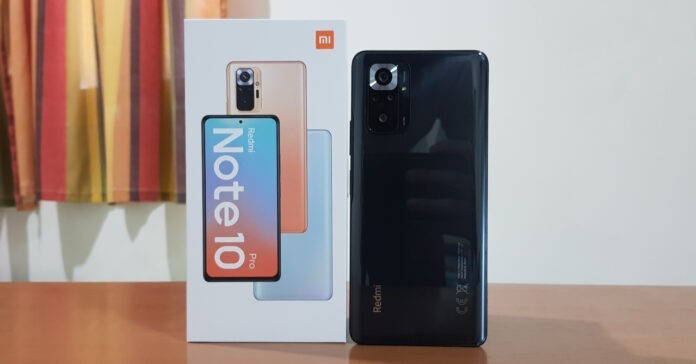 Recently, we got our hands on the Redmi Note 10 Pro, the latest mid-ranger from Xiaomi that packs impressive specs, all while having a price tag that’s well bellow PHP 15k. Not only does the phone have a Snapdragon 732G processor, it also has a quad camera setup with a 108MP main shooter–a feature mostly seen only in flagship phones.

That’s not all though. The Redmi Note 10 Pro has a 120Hz AMOLED display, and even a 5,020mAh battery. This makes the new Xiaomi mid-range an excellent deal on paper. 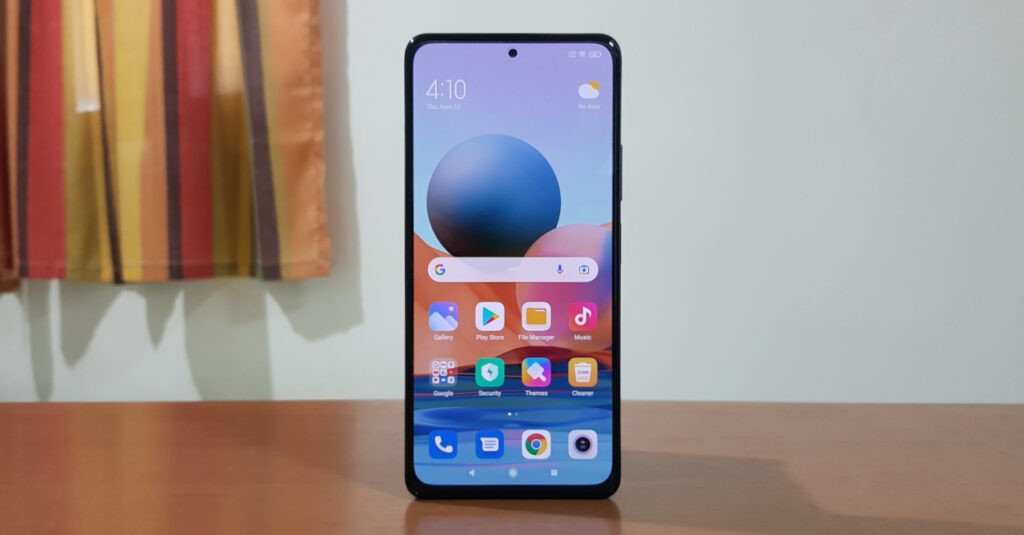 Of course, we can’t wholly recommend the new Redmi phone based on specs alone; it must also pass real-world use. So is this new phone from Xiaomi a great mid-range deal that’s worth recommending? Find out here in our Redmi Note 10 Pro review! 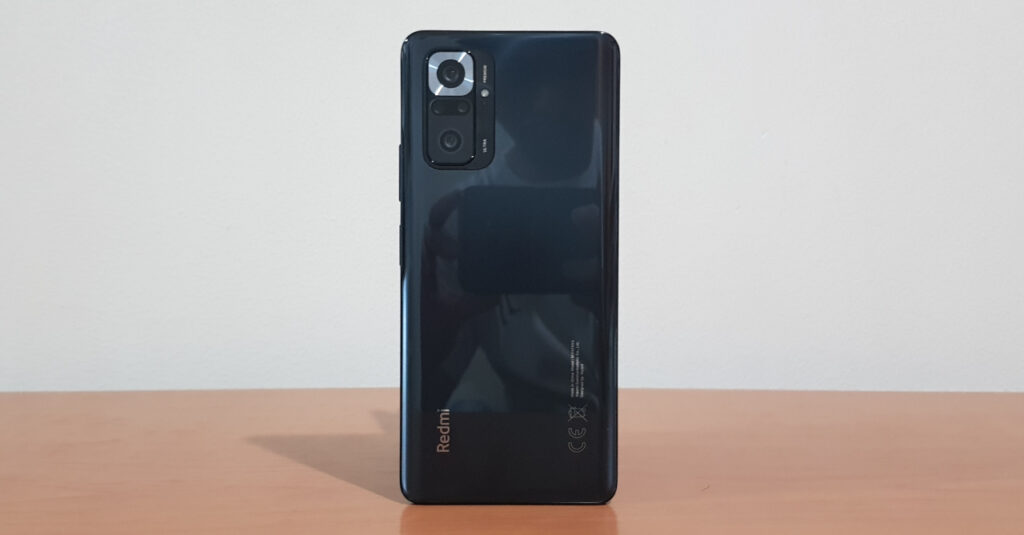 To start our review, let’s take a look at the phone’s design. As we’ve noted in our impressions, the Redmi Note 10 Pro is a sleek-looking device, especially in it black colorway. Though what gives it a distinct look is its camera module which has a one-of-a-kind design that should make it stand out even among other quad shooter-equipped smartphones.

One thing to note though about the Redmi Note 10 Pro is that its back is highly reflective–almost mirror-like when viewed directly. While this makes it look nice, it does mean that the back of the Redmi is a fingerprint magnet. So it’s a good thing that Xiaomi packed a clear case inside the box of every Note 10 Pro. 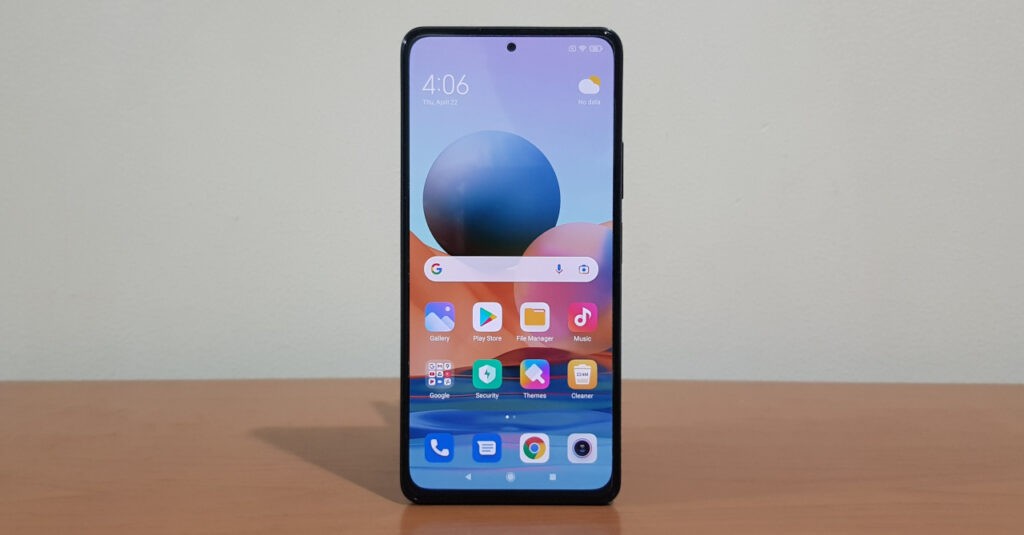 Moving to the front, we have phone’s 6.67″  FHD+ display that has a tiny notch at the top for its selfie shooter. While we prefer having the notch on the upper left instead of on the middle, thanks to the notch’s small size combined with the slim chin bezel, the phone’s front still looks “all-screen” overall, especially when compared with other mid-range devices. 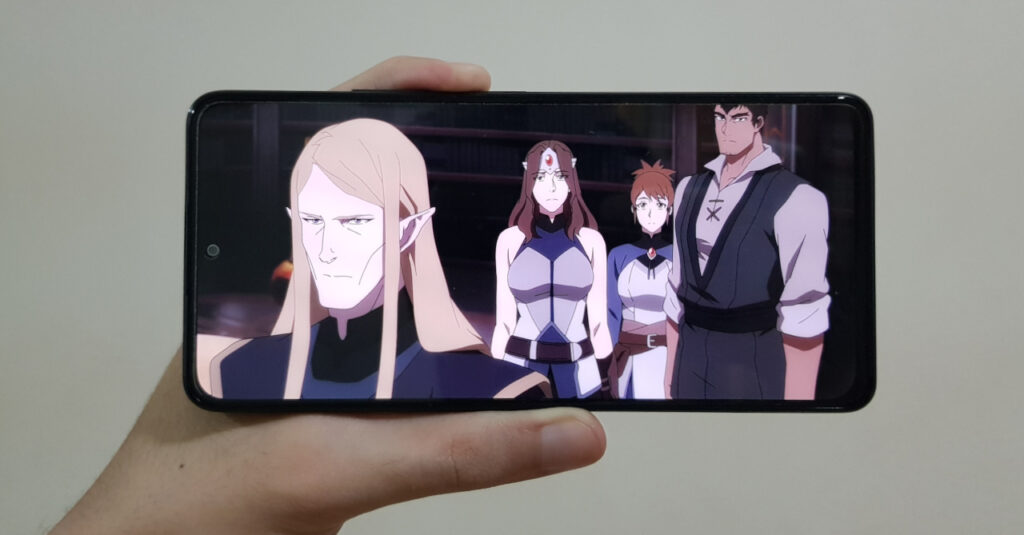 So how does the display hold up for binge-watching? The Redmi Note 10 Pro proved to be an excellent partner for movie/series marathons thanks to its large size, FHD+ (1080p) resolution, and its AMOLED panel. Yes, even with its affordable price point, this phone sports an AMOLED panel which provides vibrant colors and deep blacks.

While some other mid-range phones have disappointing to just decent onboard audio, the Redmi Note 10 Pro is an exception. Similar to flagship phones, the new Redmi has two internal speakers. This means not only stereo sound, it also makes for a louder overall volume. Coupled with the fact that the audio quality is quite nice, this means the Redmi Note 10 Pro will give you a great listening experience, even without headphones. Of course, we still recommend headphones or external speakers for longer binge-watching sessions.

As mentioned above, the Redmi Note 10 Pro is powered by a Snapdragon 732G processor. Given that the Snapdragon 700 series is processor line usually reserved for upper mid-range phones, we found that the new Xiaomi phone punches above its class in terms of gaming performance. 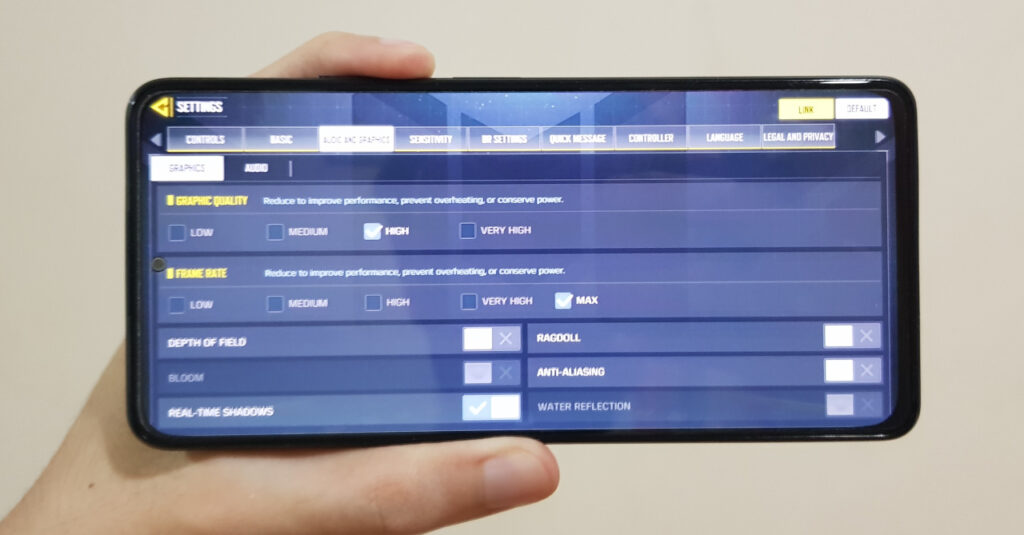 For starters, the phone is easily able to handle games like Call of Duty Mobile. If you play CoD, you’ll surely be satisfied with the Redmi Note 10 Pro as the phone is able to run it at the High graphics setting with a smooth frame rate. 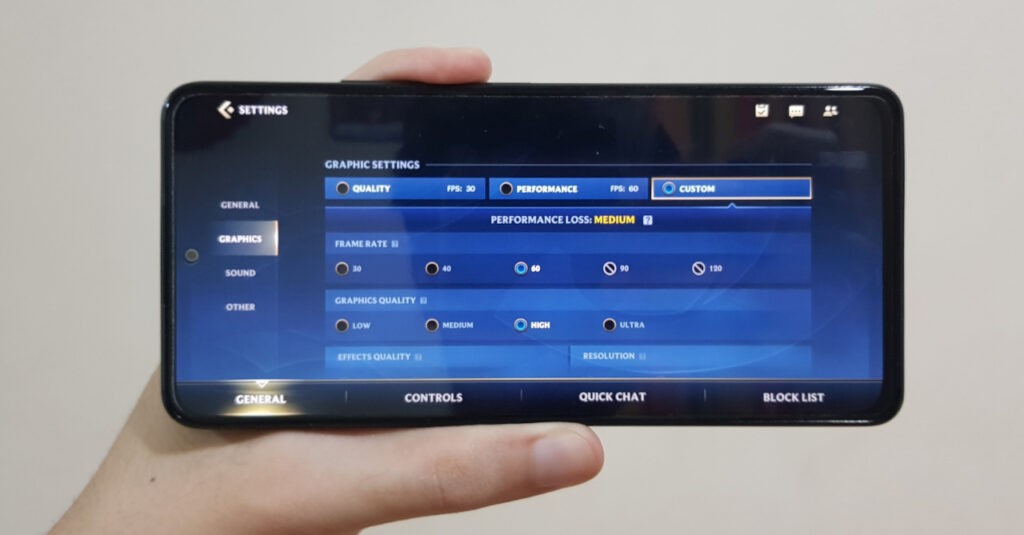 Meanwhile, if you play games like Wild Rift, you’ll also be able to run the game on High. As for less demanding titles such as Mobile Legends, you’ll also have no issues as the Redmi Note 10 Pro has more than enough power for those kinds of games.

Of course, this doesn’t mean the Redmi Note 10 Pro has the gaming capabilities of a true flagship phone. Take the hardware-intensive Genshin Impact for example; the phone is only able to run the game smoothly on the lower end of the graphics settings. Still, the overall gaming performance of the new Redmi is excellent, especially given its price tag. To add some icing on the cake, the phone has a 120Hz refresh rate display which is great for gamers as they’ll be able to try the numerous mobile titles that support up to 120FPS.

For its shooters, Xiaomi packed the Redmi Note 10 Pro with a 108MP main + 8MP ultra-wide-angle + 5MP macro + 2MP depth sensor quad rear camera setup, along with a 16MP front camera. While the rest of the shooters are what you would expect from a mid-ranger, the main 108MP camera is an interesting choice. But does it actually capture good photos? For the most part, yes!

It should come as no surprise that the 108MP main camera is able to take high quality photos in daytime. The camera’s indoor shooting performance is also good, as lots of detail is retained even when there’s only artificial room light.

At night, there is a dip in image quality, with shots lacking in detail and sharpness when using auto mode. When using Night Mode though, the 108MP shooter is able to take low light shots with good quality, complete with more detail and less noise. While not flagship level, low light performance with the Night Mode is good overall.

The 5MP macro camera though, is much better than the ones found in other mid-range devices. Usually, other smartphones only have 2MP macro shooters, so the Redmi’s 5MP macro offers higher quality images for close-up photos.

For selfies, the 16MP front camera is able to capture social media-ready selfies. Finally, the phone’s 2MP depth sensor can take nice portraits, though I found that some of my portrait photos did not blur the background that well. 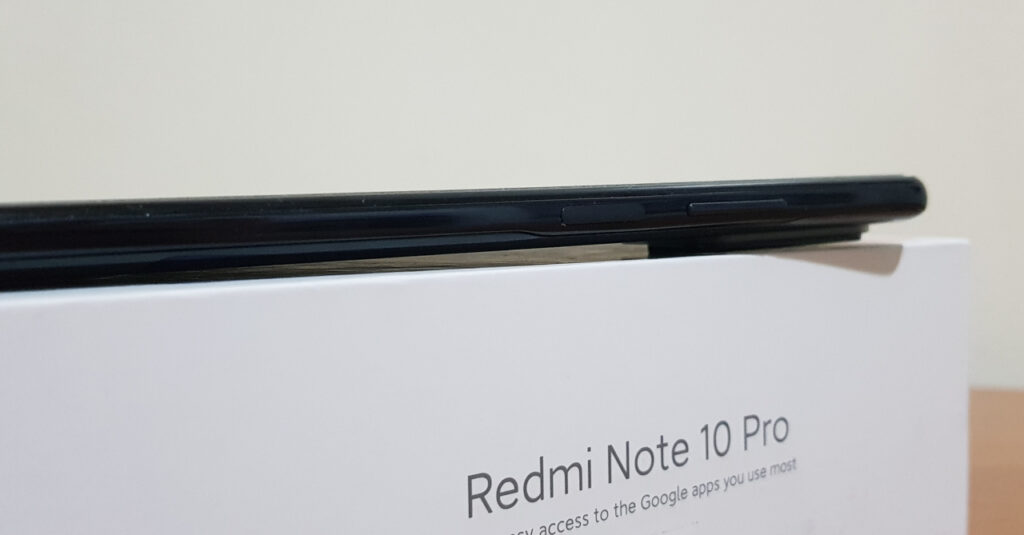 With the phone proving to be a capable gaming device, the Redmi Note 10 Pro also passed our everyday usage test with flying colors. Thanks to its 6GB of RAM and Snapdragon 732G processor, we found that the Redmi Note 10 Pro was able to keep up with our usual tasks such as social media browsing, as well as for work-related uses like checking emails, word processing and more. The 120Hz refresh rate display also helped make the phone feel fast and snappy, especially when scrolling through the menu. 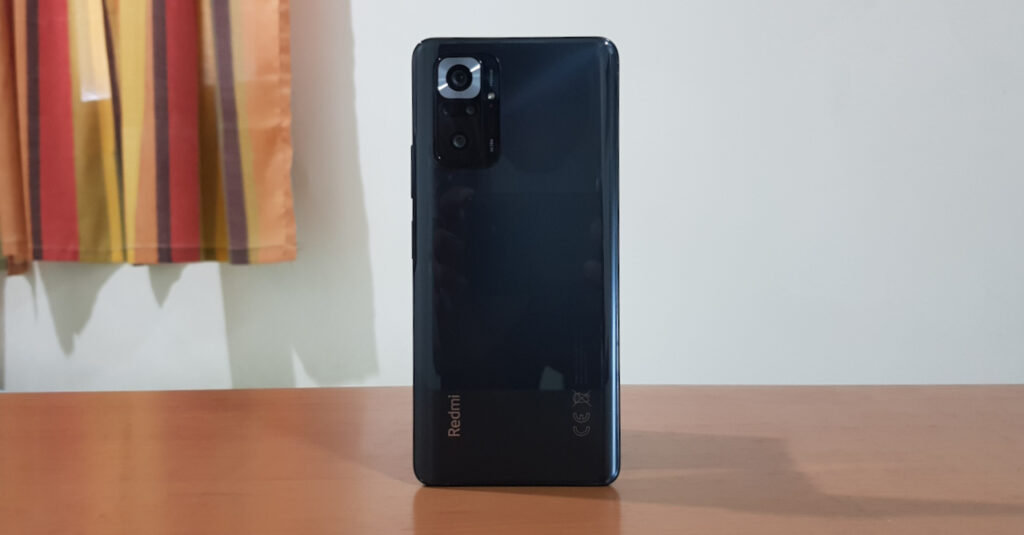 What about battery life? Well, the phone did not disappoint. Thanks to its 5,020mAh battery, we got well over a day of usage on a single charge during our Redmi Note 10 Pro review period. While your mileage may vary, you likely won’t need to charge the phone at any point within a day. If you do though, the Redmi supports 33W wired fast charging, meaning it won’t take long for the phone to reach full charge.

With its good camera setup, great 120Hz display, and excellent performance, the Redmi Note 10 Pro is the new mid-range king, especially considering its price tag which starts at just PHP 12,590. At this price, it’s tough to beat the impressive list of features that the new Redmi has.

While we would’ve preferred slightly better ultra-wide and portrait camera, those are the only real weaknesses of the latest Xiaomi mid-ranger. And they’re not even big deals for most users, so we can easily recommend this phone for users with a budget of less than PHP 15k.