There's fun to be had, but it does get repetitive. 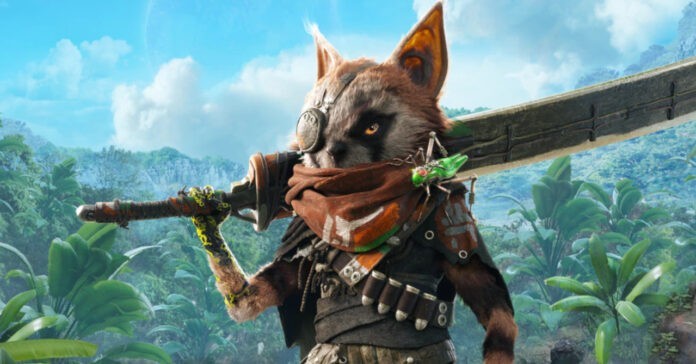 Announced way back in August 2017, Biomutant has finally been released. Prior to its release, the game got quite some buzz for its colorful setting and unique premise. But is it any good? Well, you start to see a lot of what makes Biomutant good and bad early on in the game. The thing is, that is a problem. You can see the game’s numerous influences, but it can at times feel like there is no focus.

Lets start at the beginning at the character creation screen. You will first pick your breed which changes the overall look of your furry avatar. Your character is further customized by how you will spec the stats of your character. So if you have a high intelligence stat, your head is bigger. Another example is if you have high agility, this results in longer legs. You can also change the color of your fur to some extent; I tried going with the blue and white color scheme. The result definitely looks better than the horror of Sonic’s original model in his first live action movie.

Finally, you then choose a class. There are five to choose from, but all this does is determine which weapons and skills you will start with. Most of skills you will be able to unlock as you level up or as you progress in the game. As you finish character creation, you are given your first Aura choice (I will come back to this at a later point). After, you are then thrust into a quick tutorial boss battle that gives you the basics of combat. Again, more on that later. As you first step foot into the world, you are given a rough explanation of what is happening and that it is your job to save everything. To keep it simple, the civilization that inhabited the planet prior messed it up so bad and this resulted in the wild life mutations that rule the land. Now, this post apocalyptic world is facing another apocalypse scenario. The World Tree, which is the source of all life, is being devoured by World Eaters. 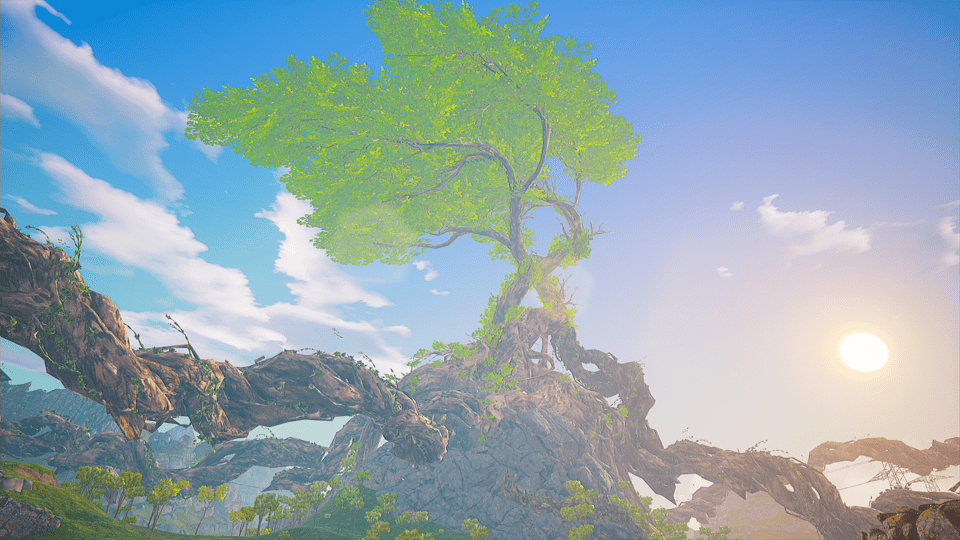 There are six factions that represent this new civilization. Each faction has its own alignment and method for dealing with the world tree/eater conundrum. Which in turn has resulted in a tribe war among them. You will ally yourself with one of the chosen factions with the goal to unite them all to deal with the impending doom.

The Narrator and the Story

A lot of the story and dialogue is delivered through the narrator. This feels novel at first; however, all the NPCs generally just speak gibberish and it’s the narrator that translates and tells you what they are saying. The problem is this can get irritating after a certain point since a lot of the dialogue is repetitive. Because of this, I found myself skipping dialogue and not really caring about the characters they keep introducing you to. Although, there is an option that will reduce how much the narrator will make his side comments.

The story loop is quite repetitive as well. It usually begins with your companion, Out-of-Date, telling you a World eater is active and you need to find this person at this location. When you find this person, you learn he is working on a mount that will be your best chance to fight the world eater. After which, you go on errand to find a component or little critter for the mount to work. Then the mount is now ready and used to fight against the World Eater. Repeat 3 more times, all with nearly identical dialogue. The world is beautifully crafted with different biomes and hazard zones to explore. One of the key highlights is how well the post apocalyptic world is depicted. It can vary from green forests that have overtaken the urban environment or a purple cloud covered complex which is just overflowing with radioactivity. There are also quite a number of varying enemies and creatures you can encounter as you explore. Abandoned buildings can have some loot for you to find. Although even with all of that, there are huge sections of the map where there is just nothing but pretty landscapes and no content in it. 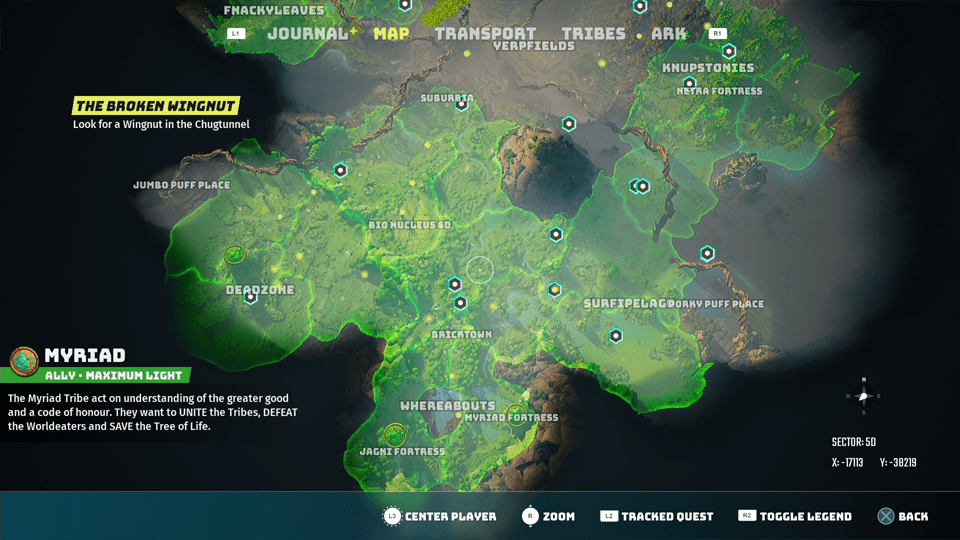 I have mixed feelings on combat. The game does give a lot of choices to customize your own combat style. Unfortunately, the lack of feedback holds back the enjoyment, especially with melee combat. Ranged combat is passable with the guns sounding great, and it even reminds me a lot of the first Max Payne’s gunplay. 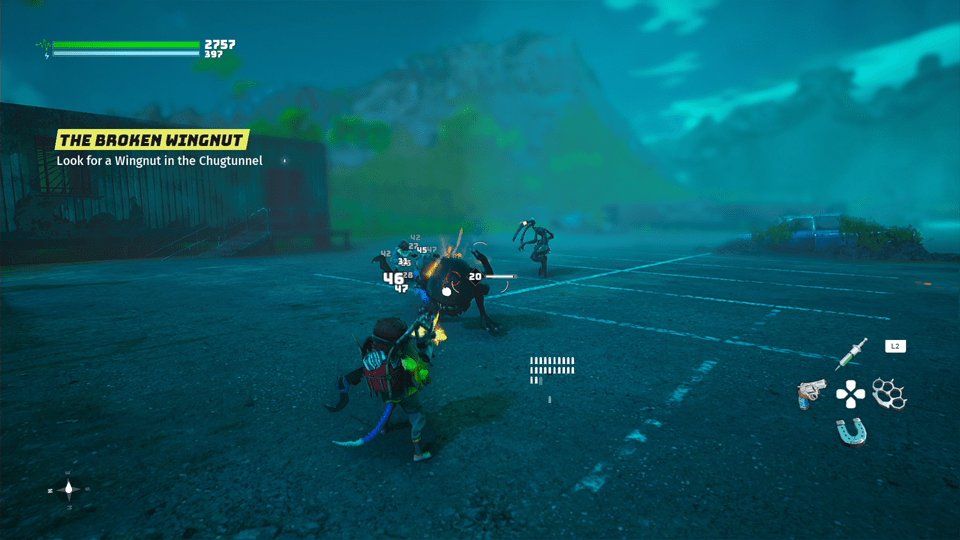 As you level up, you unlock stat boosts which you can freely assign to your choosing. I went with stats going to luck for the critical rate increase. Most of my stats however, went to intelligence as this increased the damage potential of my Biomutations and Psi-powers. The powers you can unlock can range from poison vomit and a dash that leaves fire in the trail behind you. 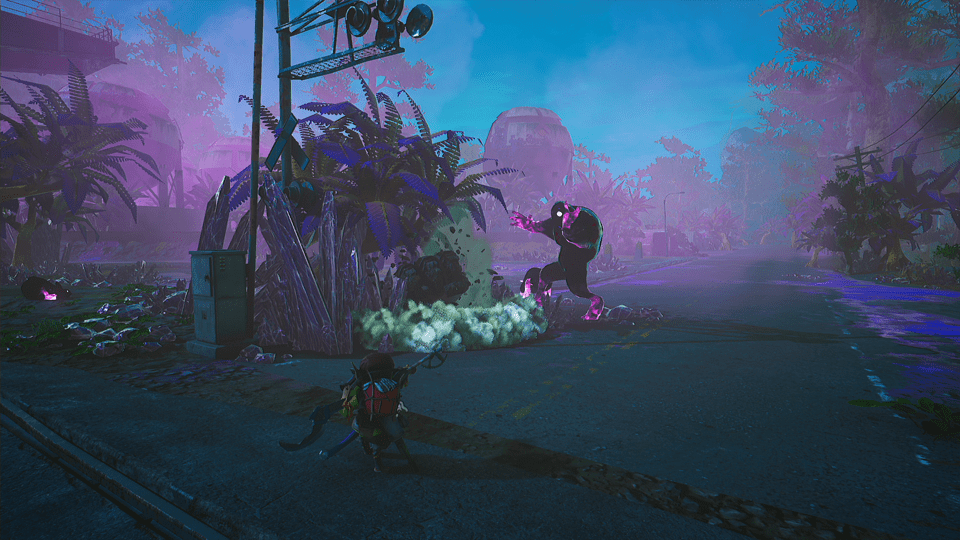 You can unlock more of these by defeating specific enemies or by finding Shrines to pray at. Once you reached the required Bio or Psi points, you can unlock new abilities. These can be mapped out to your controller so you have access to four at a time. You can switch these out on the fly which allows freedom to experiment. 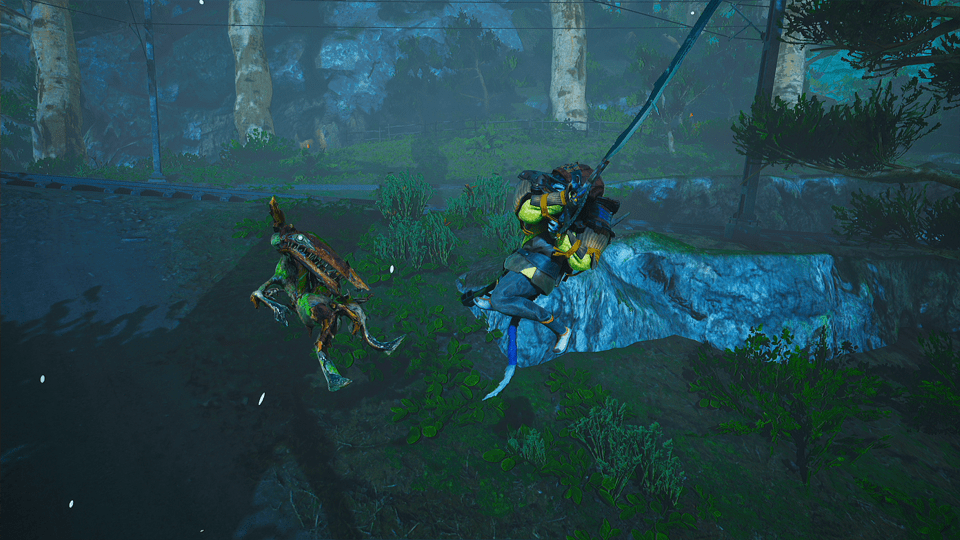 Combat starts to fall apart once you start using the melee weapons though. It feels floaty and the lack of feedback when attacking opponents can really affect your performance. It feels like attacks just go through them and the sound of combat is very lack luster. Even if you are attacking enemies they will consistently interrupt you. It tries to do the whole Arkham style combat, but it unfortunately lacks polish. A lot of the cues that inform you of an enemy is about to attack are difficult to see with all that is happening on and off screen.

One of the more enjoyable aspects is the crafting system. You can craft melee and ranged weapons. As you explore the world, you can find more parts to customize with. It usually begins with selecting parts. For a ranged weapon, you pick a handle, a muzzle and then a main component. The main component will determine if your weapon will be either a rifle or a shotgun, its overall damage output and if it will include element damage. You can then include add-ons or other components to increase the damage or clip size. 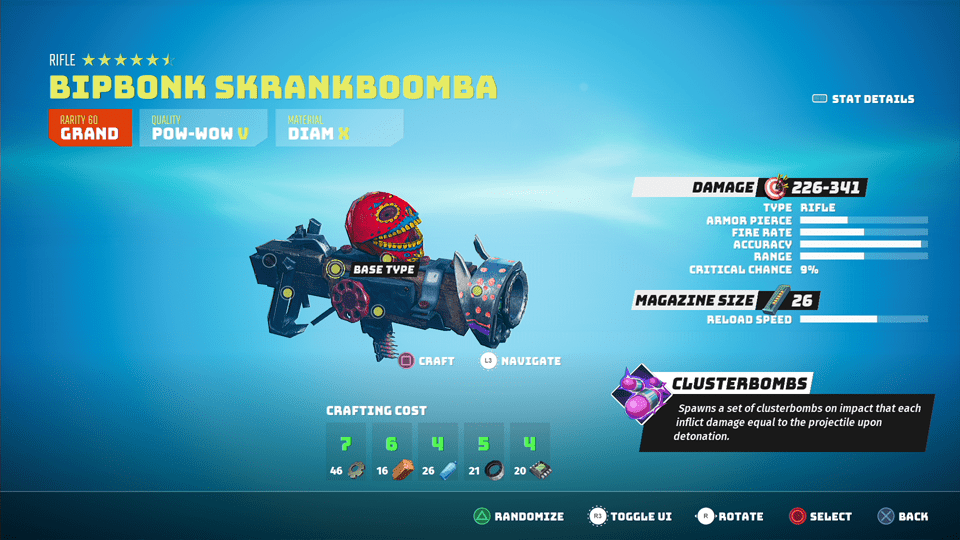 With armor on the other hand you mostly find in world. They maybe hidden in closets, freezers, car trunks, or treasure chests. You can customize them with add-ons to improve defense or give stat bonuses. There are even side quests to help find suits that can completely protect you from hazard zones. 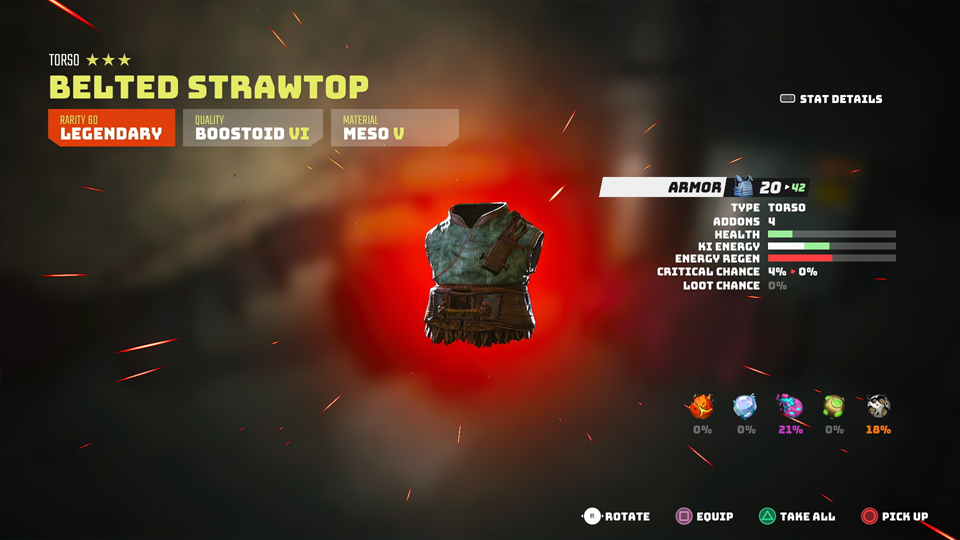 The voices of dark and light are probably the only other characters you can hear in the game. They are representations of your Aura. They usually banter between each other depending on whether you choose the Light or Dark side. As you lean towards a certain alignment, the narrator dialogues starts to differ slightly, but has no real impact on the story. The best use of increasing an alignment is the abilities you can unlock. The Dark side has a skill that is similar to an orbital strike, while the Light side allows you to shoot lightning from your finger tips. Increasing this Aura is very easy. It can be done by your dialogue choices or how you treat defeated enemies. The easiest way is by catching small animals and deciding if you want to Pet the animal or kill it. 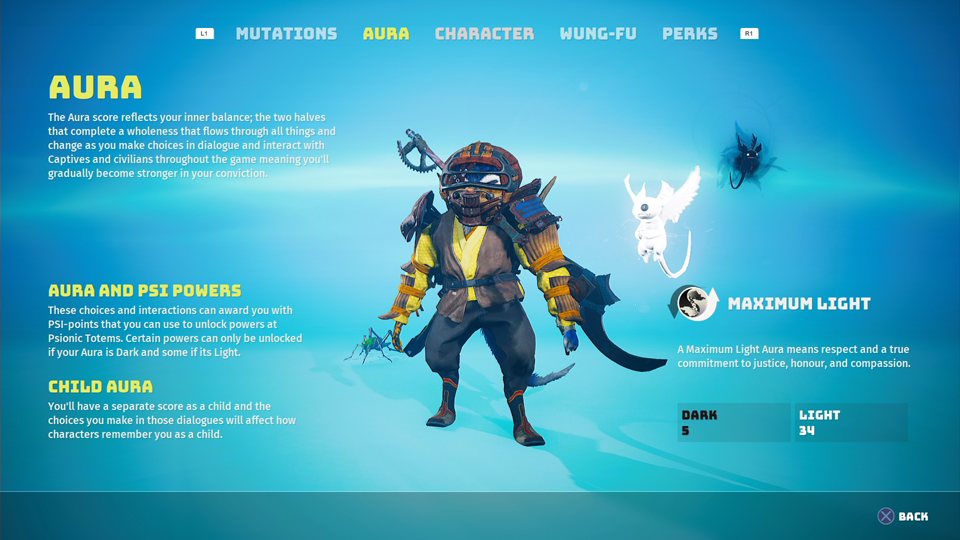 Making an Open world RPG as their very first game was very ambitious for the new developer, Experiment 101.  Biomutant is a very unique game in terms of how it looks. But you can clearly see its influences and barely succeeds in implementing a lot of them into the game. But after progressing through the game, I had lots of moments where I wished I was done with the game since it got rather repetitive.

Do you think Biomutant is a game for you? The game is available now at video game retailers in the Philippines. Check out this link for a list of stores where you can get the game: https://www.epicsoft.asia/biomutant

A good looking open world and great character customization options. But with repetitive dialogue and unpolished combat. It hard to enjoy the game and push through to see the ending. Biomutant Review | A Hodge-podge of Open World RPGs