A must-play for both series veterans and RE newcomers! 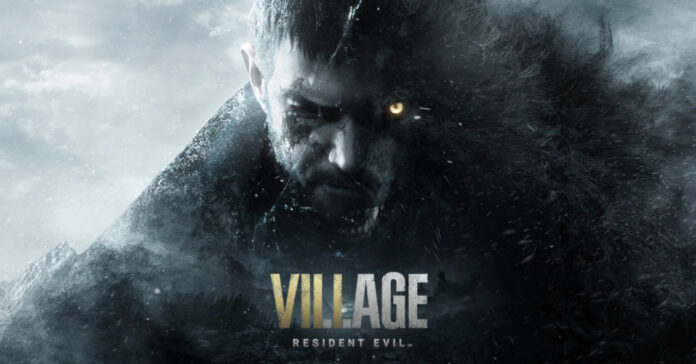 The past two years gave us remakes of the classic Resident Evil 2 and 3, but now, Capcom has released Resident Evil Village, the first main entry to the series in nearly four years and the sequel to 2017’s RE7. Resident Evil 7 was a return to the series horror routes (given that RE5 and 6 were pretty much action games instead of horror), and it even had a first-person perspective to amp up the horror. With Village, Cacpom kept this first-person view, but it seems that this new RE game leans more on the action as it takes inspiration from RE4. Plus, series fan-favorite Chris Redfield is front-and-center in this game (though RE7’s Ethan is still the playable character), meaning Village should have more connections with the overall RE lore.

So, did Capcom succeed in creating a good follow-up to RE7? Or does the focus on action make this a less memorable horror ride? Find out here in our Resident Evil Village review!

So yes, RE Village is more action-packed than Biohazard, with the game forcing players to face off against a wider variety of enemies. In exchange, ammo is more plentiful this time around, especially considering that RE7 really didn’t give players much in the way of supplies. 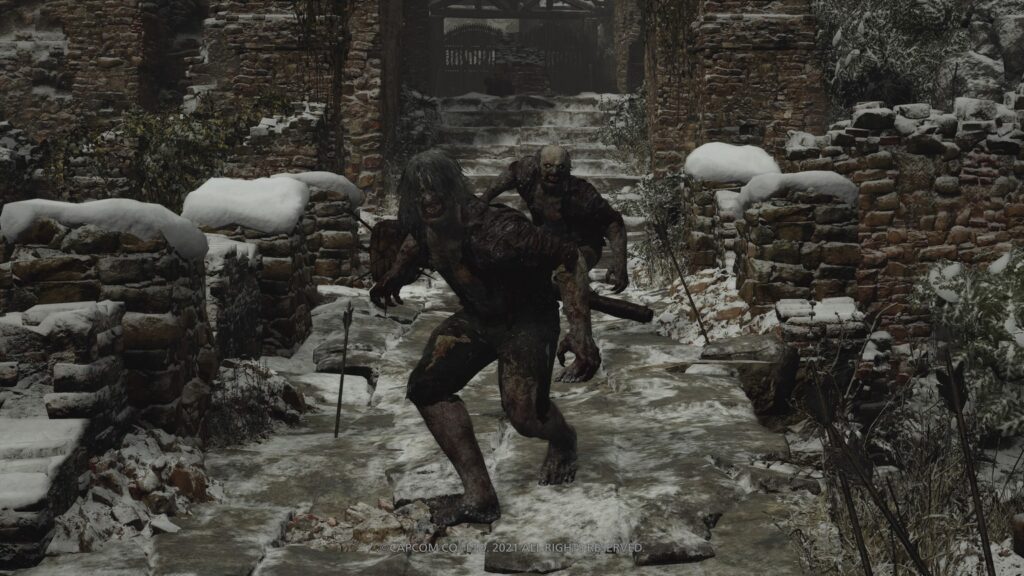 While Village plays similarly to RE7, Ethan does feel stronger this time around (owing to his new military training as mentioned in the intro). In Village, Ethan can now climb through windows and fences, meaning you have a bit more options when surrounded by enemies. The gunplay in Village also seems rather improved as aiming and shooting feels slightly better, and much more satisfying.

Speaking of guns, Village features a good variety of weapons, ranging from handguns, shotguns, and even a sniper rifle. These weapons can be upgraded by visiting the Duke, the game’s charming and memorable shopkeeper. The Duke also sells a variety of items such as weapon mods, first aid meds, and extra ammo. If you have already bought all the Duke’s ammo stock before he replenishes, don’t worry as you can craft ammo and first aid meds with supplies that you scavenge throughout the world. 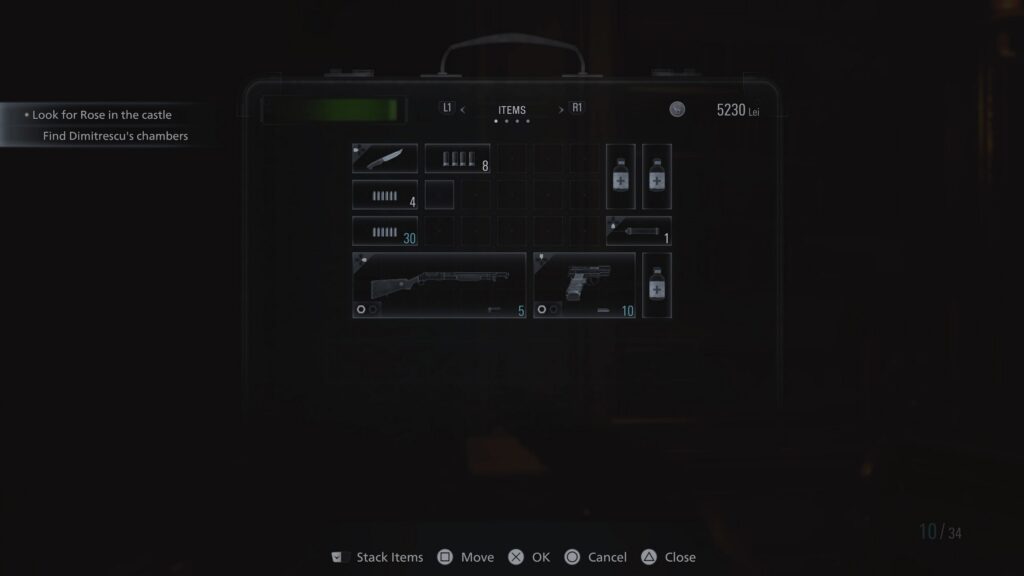 There are a lot of items that you can pick up, though you only have a limited inventory that’s straight out of Resident Evil 4. This “inventory tetris” system means you have to flip and arrange your items properly, so you can’t just grab all the loot out in the world willy nilly. But as the game progresses, you are able to expand your inventory space with the help of the Duke.

As I mentioned above, the game gives you a lot of ammo and supplies when compared to RE7. You will need these as the game does throw way more enemies at you. Aside from more enemies, the variety of foes that you face is also higher. Even though having more enemies may seem harder, Village is not a particularly tough game on the Standard difficulty setting. If you’re a series veteran then, the Hardcore difficulty is recommended.

The game’s fairly easy difficulty and focus on action means it’s not as scary as RE7. But make no mistake, there are still several tense and horrifying moments that you’ll experience as you explore the titular Village.

Some of the best Resident Evil games had memorable settings, from RE7’s Baker Ranch to RE2’s Raccoon City Police Department. After playing Village though, I have to say that the titular village might just be the best one yet! 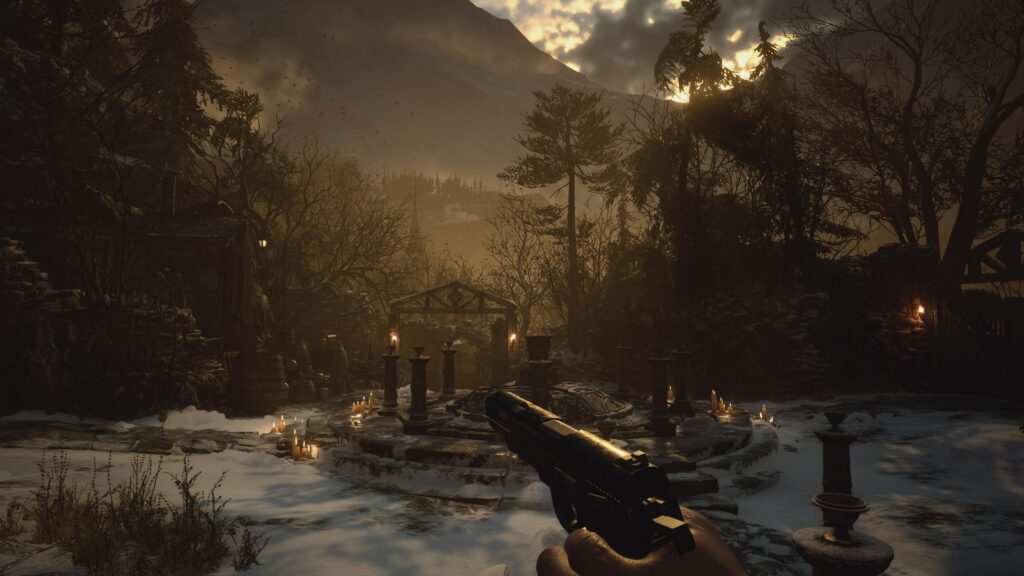 While the Eastern European village itself has a creepy and unique atmosphere, what truly makes the setting a memorable one is the various other areas that you visit as you progress. These different areas each hold a certain ‘Lord’ of the village, and each has its own flavor of horror, making the Village feel like one big horror theme park (as the developers intended). From a journey to a castle that’s straight out of a gothic horror, to a trek through a factory that’s inhabited by fearsome Frankenstein-like techno-zombies, the various areas in Village are all incredibly well made in terms of visuals and atmosphere. To top it all off, these areas don’t just offer different flavors of horror, they also have their own unique gimmicks and enemies, keeping the experience fresh.

Aside from how great these areas are in terms of visual design; the layout of the whole Village is well thought-of. After every boss area in the game, you are transported back to the Village, and often-times you have a new key or item that unlocks another part of the Village for you to explore (kind of like a Metroidvania). And when exploring the various locales of the village, you’ll come across a variety of puzzles (in typical RE fashion) that serve as a nice change of pace to the mostly action-oriented gameplay. Take note though that most of these puzzles are simple and fairly easy, so fans looking for tough brain scratchers may be slightly disappointed. For me though, I liked the straightforward puzzles as they did not break up the game’s pace. 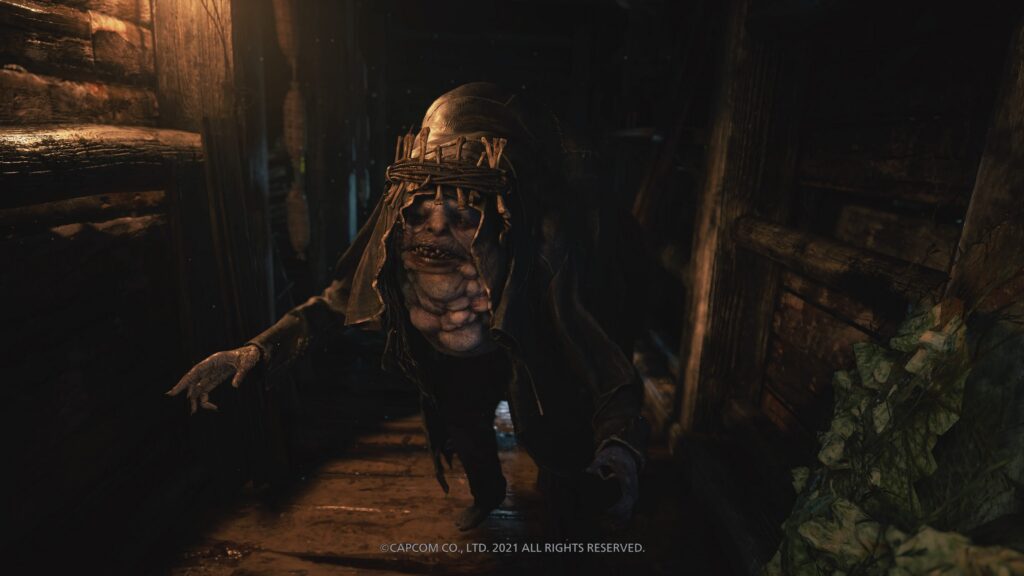 The various areas in the village are great, but what truly elevate them are the four lords. From the popular Lady Alcina Dimitrescu to the grotesque Salvatore Moreau, the main bosses of the game are incredibly memorable, both in terms of design and in their performances. Capcom really knocked it out of the park with these main baddies, so much so that they’ll likely be talked about by RE fans for years to come. The only nitpick I have with them is that most of the actual fights against these bosses could’ve been better. Sure, they’re not bad, but I would’ve liked to see something more complex for the fights against them.

Expanding the RE Lore

As I mentioned above, Resident Evil Village is more connected with the overall RE lore; in fact, Chris Redfield is even on the game’s cover. While it’s still very much a continuation of Ethan’s story from RE7, Village expands the lore of the Resident Evil series, meaning long-time RE fans will likely enjoy the various connections the game has with previous titles in the series. 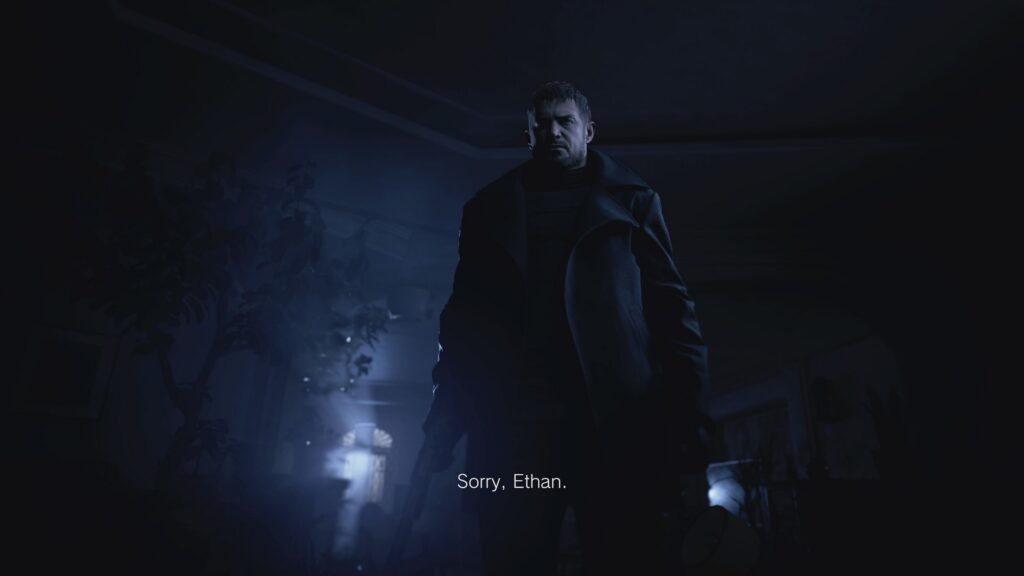 Another thing I liked about Village is how Ethan is portrayed. In RE7, I didn’t care much for Ethan; but in Village, I found him to be a more compelling character to play, thanks in large part to the better writing of his lines. Sadly though, Ethan’s face is still a mystery, even when you finish the game. The in-game model viewer even blurs out Ethan’s face when viewing his model.

Short, but there’s a lot of Replay Value

Resident Evil games don’t exactly take too long to finish, and Village is no exception. I finished my first run of the game’s story in around 10 hours, so you can expect to play for around 10-12 hours, depending on how much of the map you explore. Even if 10 hours seems a bit short, the game offers a lot of replay value. Not only is playing the game again still fun, your weapons and items carry over in New Game +, meaning you can more easily set a fast completion record, or challenge yourself in the game’s Village of Shadows difficulty (which is an even tougher difficulty unlocked after finishing the game). Playing through the game again also gives you completion points which you can spend on weapons and other items to use in your playthrough. 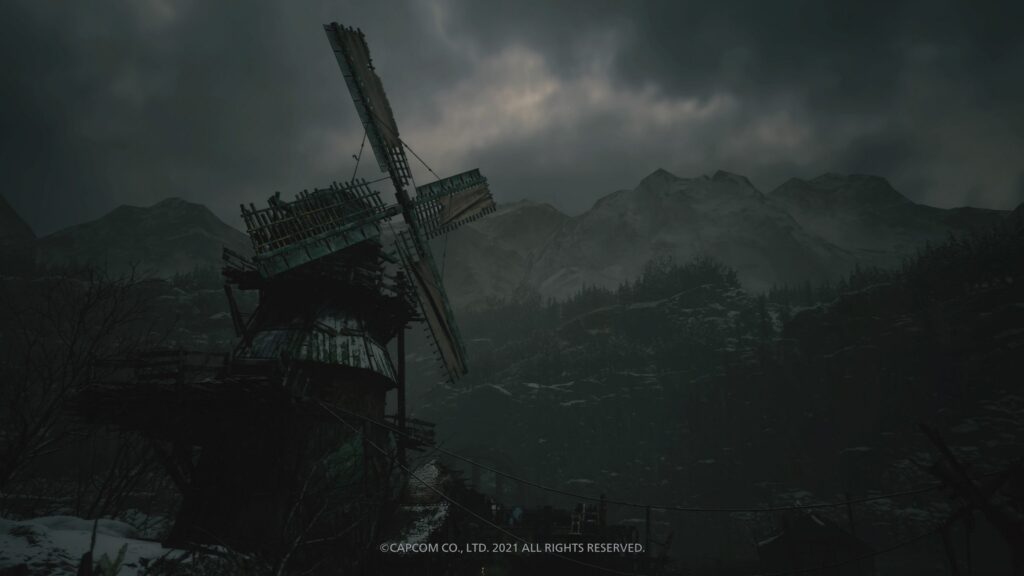 Along with replaying the game’s story, Village also comes with the Mercenaries game mode. Series veterans are likely familiar with this mode, but if you aren’t, Mercenaries tasks you with killing as many enemies as you can on a time limit; the more enemies you kill, the higher your score. Once you clear a stage, you can get extra supplies and upgrade your weapons before proceeding to the next.

Mercenaries in RE Village is fairly straightforward, but it is quite fun thanks to the solid gunplay mechanics of the game. Plus, Mercenaries rewards you with more completion points to use for unlocking more weapons.

As a cross-generation title, Resident Evil Village isn’t exactly a showpiece title for the PS5 like Returnal was, though it’s still a great game technically on the newer consoles. As I played the game on a PS5, I had a great experience thanks to the game having incredibly fast loading times, so much so that I did not see a single loading screen during my full 10-hour first playthrough. 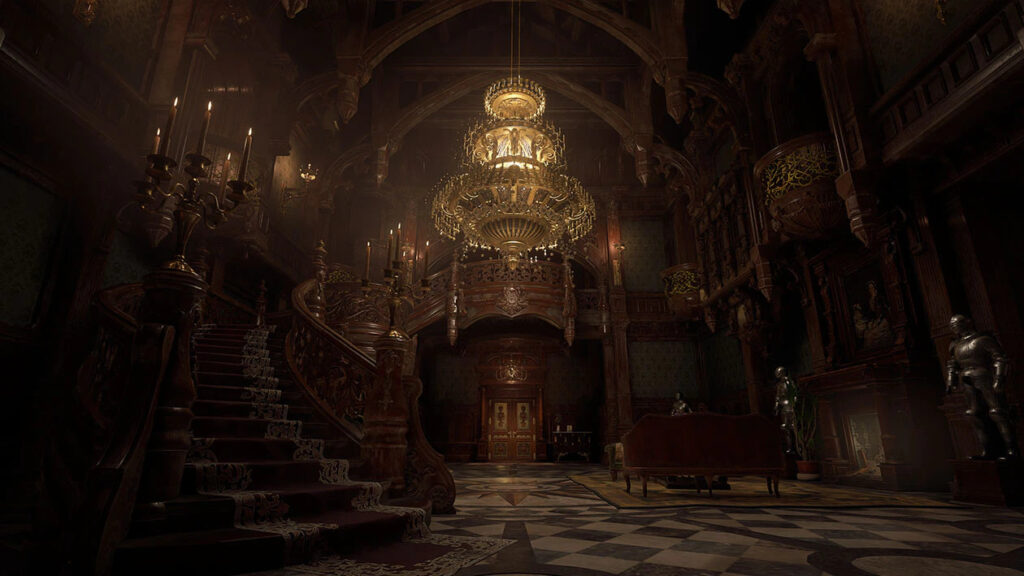 Aside from fast loading, the game also ran smoothly on the PS5 with ray tracing on. But as Capcom recommends, you should turn off ray tracing if you want a smooth 4K 60FPS experience. If you do decide to turn it off, don’t worry as, while ray tracing looks great, it’s not a night-and-day difference to RT off.

For the visuals, RE Village looked great overall. Sure, some textures looked a bit low-res when seen up close, but for the most part, you won’t really notice these in the middle of gameplay. Plus, the game’s overall art style and incredible lighting make it a game that I’d still call visually impressive overall. 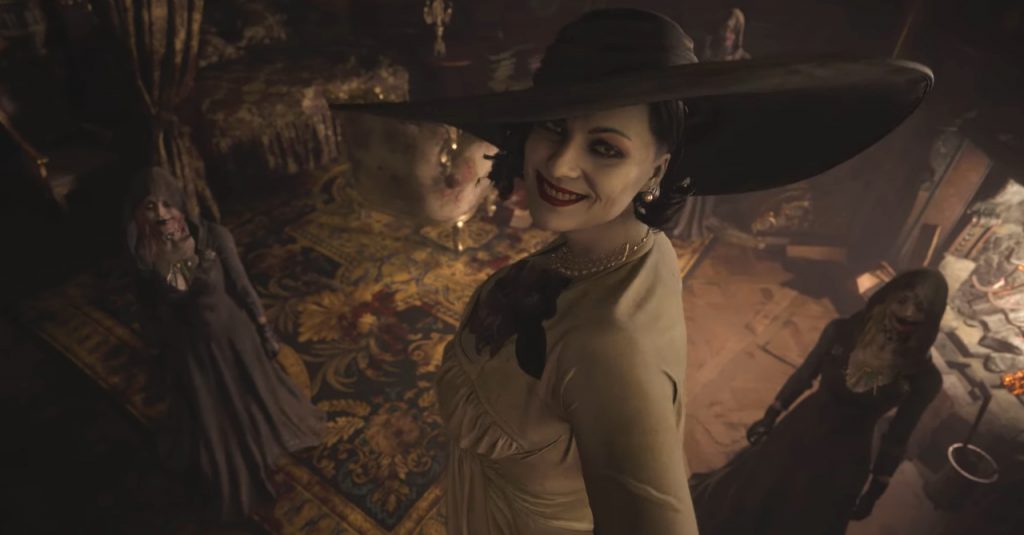 If RE7 Biohazard was a return to the series’ horror roots, Resident Evil Village feels like a culmination of the series’ best moments. The game nicely combines the horror elements of RE7 with the fun action of RE4, making for a compelling game to play, both for long-time series fans and newcomers alike. Even though it can be seen as a fusion of the two highlight RE games, Village does have its own identity, thanks in large part to its beautiful, horrific, and well-designed world that’s inhabited by some of the series’ most memorable foes to date. Sure, Village could use some improvements in certain story aspects and boss fights, but overall, Village is a must-play for anyone looking for a thrilling horror ride.

Resident Evil Village is a more action-packed take on the RE7 formula, and it pulls it off well thanks to its well-designed an beautiful game world, memorable characters, and fun gameplay. While it trades some of its predecessors scares for more action, Village is still a must-play for both fans and newcomers alike. Resident Evil Village Review | A Thrilling Horror Funhouse