Summer is long gone, and the new season brings a new set of challenges. For Globe and Mineski Philippines, the country’s premier esports organization, together with Riot Games Southeast Asia, official mobile partner OPPO, and official sponsor Master, it’s the perfect time to spice up the upcoming months with the Fall Season of the esports tournament, 2021 League of Legends: Wild Rift SEA Icon Series Philippines.

The Wild Rift SEA Icon Series is the official tournament for League of Legends: Wild Rift, licensed by Riot Games. Following a successful summer season, the 2021 League of Legends: Wild Rift SEA Icon Series Philippines: Fall Season adapts a new and promising tournament format, starting with the Open Qualifiers. Teams can compete in four qualifier tournaments wherein the top teams will advance to the group stage featuring a total of 16 teams, including the top 4 teams from the previous season: Amihan Esports, Team Secret, Liyab Esports, and Omega Esports. Each series won in the tournament will award Globe Cup Points, all convertible to cash and equivalent to PHP1 each. The tournament starts this month and closes registrations on July 4, 2021, giving all teams a chance to win an accumulation of 5,000,000 worth of Globe Cup points, equivalent to five million pesos at stake.

“The big change for the Fall Season is that all teams, regardless of team composition and location, can now play in the 2021 League of Legends: Wild Rift SEA Icon Series Philippines. As we continue to uphold our responsibility as the license holder of Riot Games esports in the country, we will continue to listen to our players’ and fans’ needs and continuously improve the experience,” says Mark Navarro, Country Manager of Mineski Philippines. 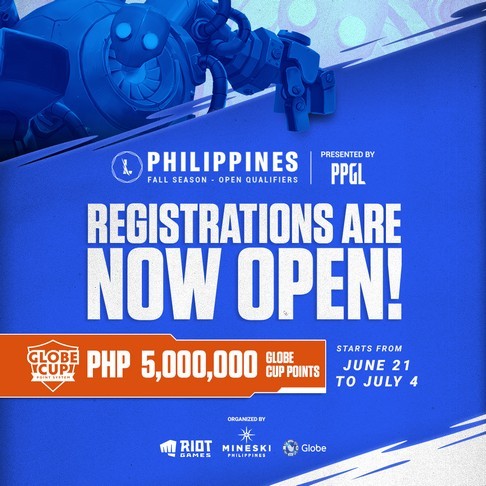 Co-presented by Globe, the tournament will be done through the Philippine Pro Gaming League (PPGL) starting with Open Qualifiers for all Philippine teams who registered from June 21 to July 4. Four rounds of Open Qualifiers with 265 teams each will be happening from July 1 to 11. The top three teams from each round will then advance to the Group Stage, with the third team to be determined via battle for third.

The competition will heat up during the Group Stage happening from July 23 to August 15, done via double round-robin. The 12 teams coming from the Open Qualifiers will then be shuffled into 4 groups and each group will be joined by one team seeded from the Summer Playoffs. The top 2 teams from each group will then qualify for the Playoffs.

The eight teams left in battle shall then fight to the finish for the champion spot.

DC Dominguez, Head of Game and Esports of Globe Telecom says, “It’s difficult to overstate just how the esports industry has boomed over the past few years, especially so in the past year with all of us staying at home. This new tournament format for the League of Legends: Wild Rift SEA Icon Series Philippines:Fall Season just widens the possibilities and excitement for everyone involved, especially the Filipino esports enthusiasts. With the rise of Wild Rift users in the Philippines we are creating data packs and SKUs that greatly enhance their gaming experience.” 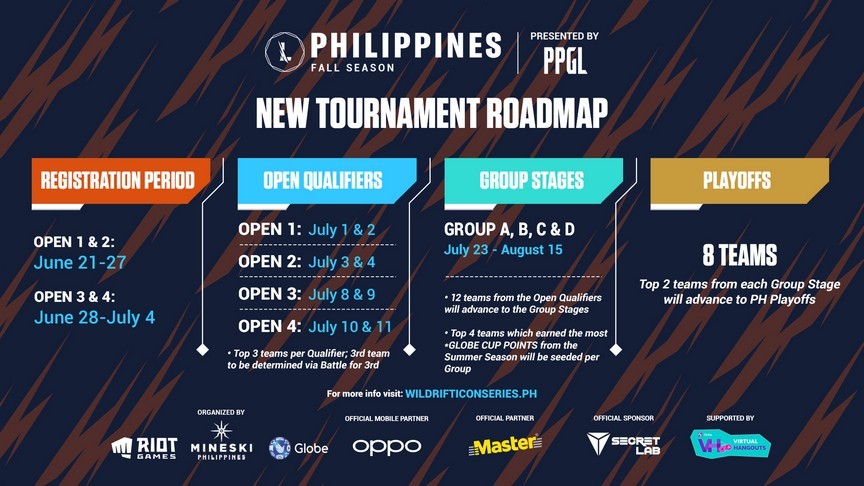 Lastly, this season, everyone that has won and progressed in this tournament, stands a chance to be awarded Globe Cup Points.

Navarro, speaking on behalf of Mineski and partners Globe, Riot Games, Oppo, and Master adds, “We can not contain our excitement for the Fall Season of the 2021 Wild Rift SEA Icon Series Philippines. Every tournament is a treat to players and fans alike, but we are particularly compelled with this one. The local esports scene is bursting at the seams with potential and it is in tournaments like this that we discover new talent that can one day become the best in the world. It’s a proud moment in Philippine esports history!”.

Open Qualifier registrations were announced on the website and the PPGL Facebook page on June 21. Registration closes on July 4. Each Open Qualifier will be capped at 265 teams on a first-come, first-served basis.

For more information, visit wildrift.leagueoflegends.com, http://www.facebook.com/wildriftPH or https://twitter.com/wildriftPHL. Catch the exclusive live streams on the official channels of PPGL.