A great package, but is it a worthy upgrade? 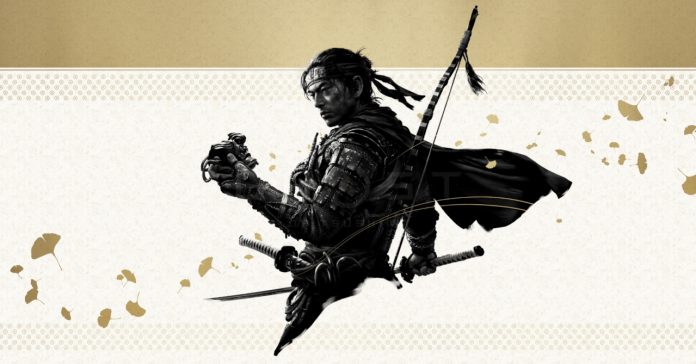 It’s been a year now since the release of Ghost of Tsushima, one of the best-selling new IPs of the previous console generation. And while the game already got a free multiplayer mode in Legends as well as a 60FPS upgrade for the PS5, the new Ghost of Tsushima Director’s Cut promises to be the game’s definitive version.

Along with the base game and the Legends multiplayer mode, this Tsushima Director’s Cut also includes the Iki Island expansion which includes a new island to explore, as well as a new story, quests, and mini games. To top it all off, the Director’s Cut also includes quality-of-life updates, and even PS5 console-specific enhancements such as 3D audio and adaptive trigger support. 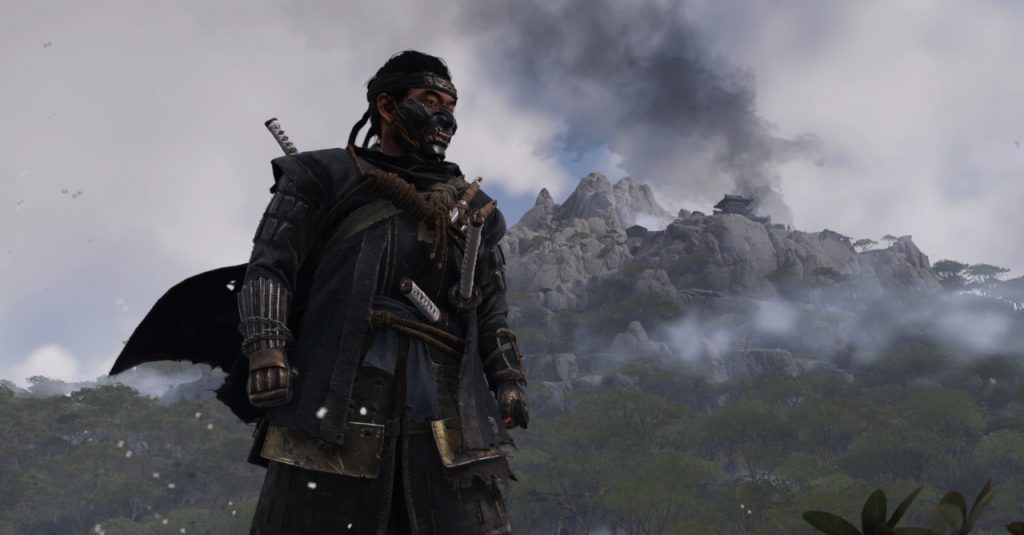 Ghost of Tsushima Director’s Cut on paper includes a wealth of new content and enhancements, but is it worth the upgrade for owners of the original game? And is the Director’s Cut the best way to play ‘Tsushima’ for players who have yet to try it out? Here’s what we think in our review!

[NOTE: This review focuses on the new content and enhancements in the Director’s Cut. For the main game, check out our full review] 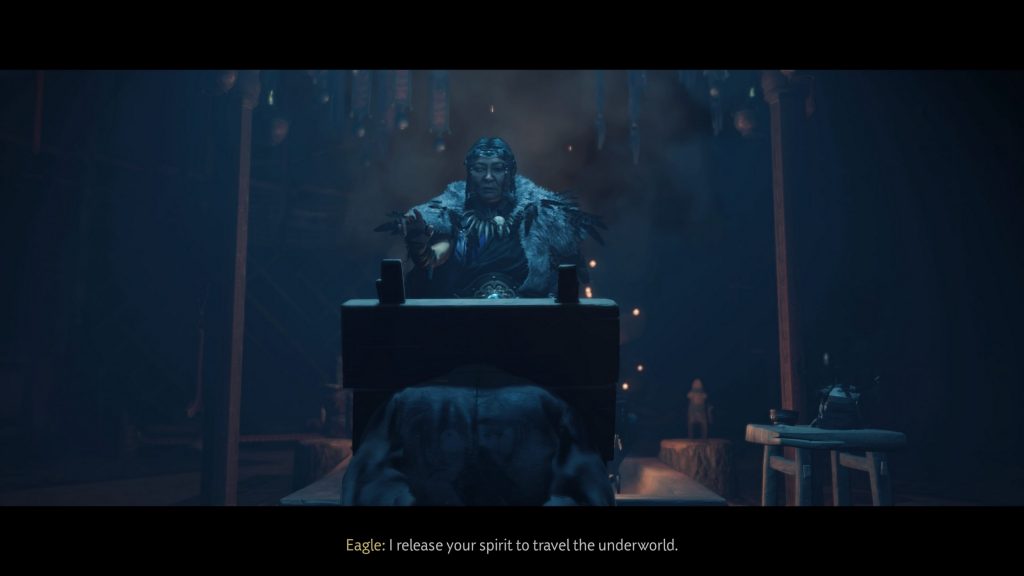 The highlight addition of this Director’s Cut is no doubt the Iki Island expansion, especially as it comes with a new storyline. Taking place before the end of the main game, this new story sees Jin travel to the nearby Iki Island to investigate a new Mongol tribe. What he finds there is not only fearsome new foe, but it also has him confront some personal demons.

I won’t go into much detail regarding the storyline of Iki Island to preserve the experience (and because the review guidelines forbid me from doing so). But what I can say without going into much detail is that the new story succeeds in a similar manner to the original questline in that Jin’s quest has some deep personal stakes. If the main story of Ghost of Tsushima sees Jin struggle with his samurai beliefs, the Iki Island quest line has Jin grapple with something that may be just as difficult.

The overall quality of the new storyline is high for sure, but it’s not perfect, especially on how it was presented. For one, the story can feel a bit rushed. More accurately, playing through the main storyline can feel less like a cohesive narrative experience and more just moving from one mission to the next. The pace of events is also a bit too fast for my liking, meaning the main quest line didn’t flow all that well in my playthrough. It probably would’ve been better if the main quests were given more time to breathe. 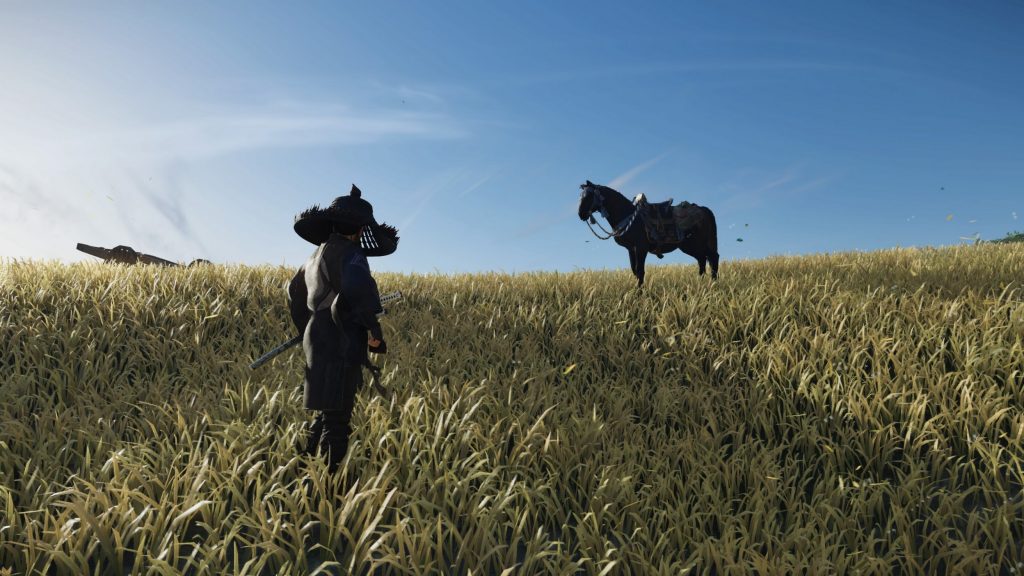 Even though I had some issues with how the story was told, I did find the actual quests themselves to be incredible set pieces. While the gameplay loop and general objectives in each mission didn’t really evolve much from the main game, they did feature wallpaper-worthy visuals, along with other memorable moments. Again, I can’t really go into detail about these, but trust me, most of the quests had me taking lots of screenshots through the improved Photo mode.

While I mentioned that the gameplay loop doesn’t really differ much from the original game, the Directors’ Cut does bring a new mechanic and two new enemy types. The new mechanic is a new charge attack while on horseback. How it works is that while on your horse, you can charge through enemies by holding L1 to take them down. Though doing so does consume resolve, so it’s not a free way to thin out a group of enemies.

As for the new enemies, first is the Shaman. This new foe is armed with a spear but isn’t much of a threat when alone. What does make the Shaman dangerous is that he buffs other units while he’s on the field, meaning the rest of the Mongol enemies are tougher to beat while he’s still around. 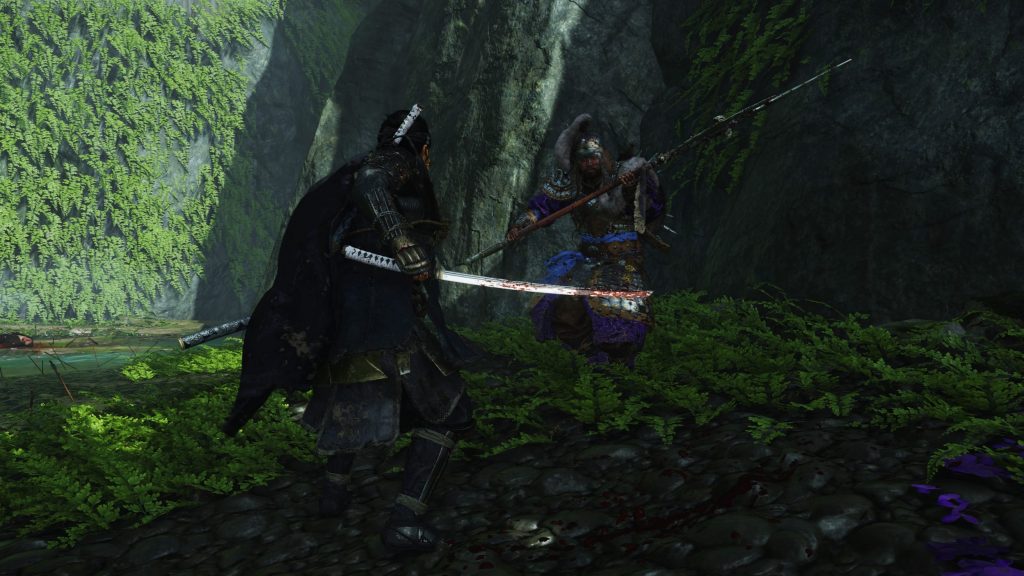 The other type of enemy is a Mongol soldier with multiple weapons. Unlike previous enemies that only have one type of weapon, this solider has a sword and shield, a spear, and another sword he can use to dual-wield. Facing off against these enemies requires you to constantly change your stance. This might not seem like much at first given that you must change your stance a lot anyway, but it does add an extra layer of challenge which I appreciated.

The two new enemy types aren’t the only significant additions in the Director’s Cut though. There’s also Iki Island itself. 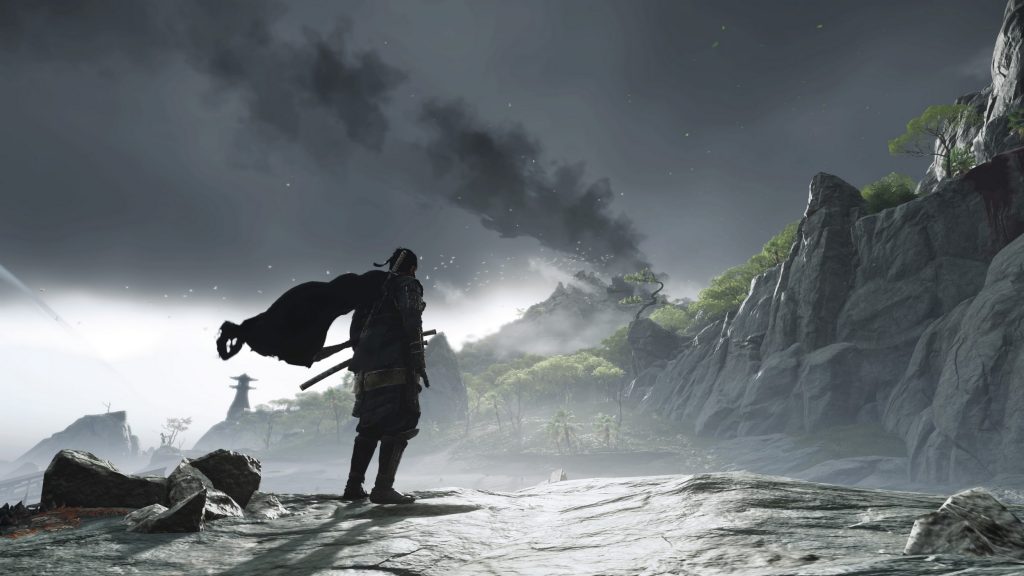 Aside from new hot springs and bamboo strikes, Iki Island also introduces new activities such as archery challenges and a new type of shrines, among others. And of course, Iki Island also has new Mongol camps that you must clear, meaning this expansion will definitely give you a lot of gameplay hours. Specifically, while it only took me around 5 hours or so to finish the main storyline of the expansion, completing the full island will take around 10-15 hours. Admittedly though, my playtime may have been slightly inflated due to my time spent marveling at the island’s gorgeous visuals. 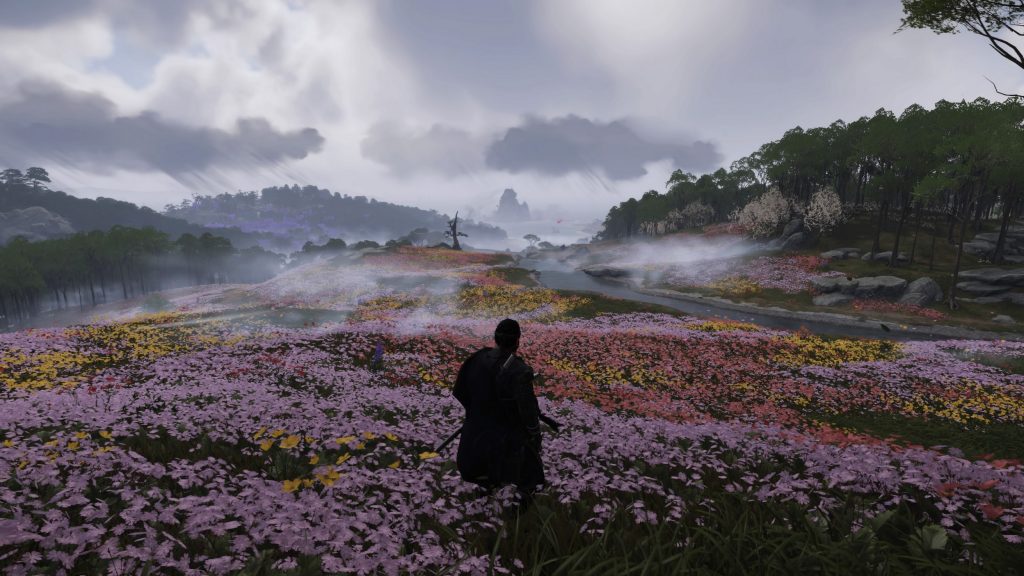 Tsushima island in the main game already featured a lot of beautiful vistas, but Iki Island may actually have it beat in terms of the amount of eye candy. Even though it’s a fairly small area, Iki is filled with beautiful scenery that will definitely have you taking screenshots with the photo mode. What’s even more impressive is that the beautiful locales are varied in terms of color and design; they don’t feel like simple rehashes of the pretty areas in Tsushima Island.

A Host of Improvements 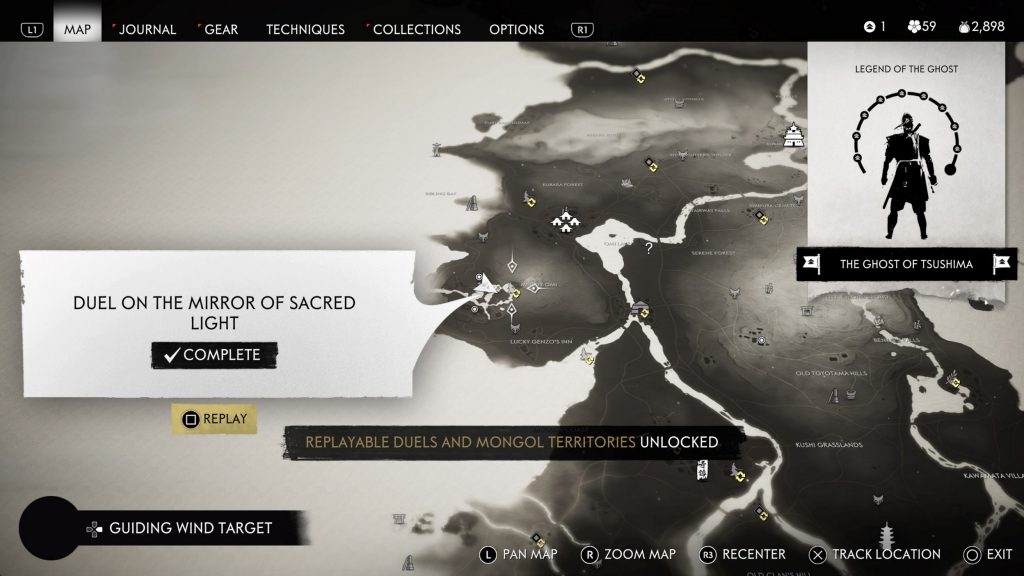 New content isn’t the only addition in this Director’s Cut, there’s also a range of new features, including more accessibility options, as well as a lock-on feature. Personally though, the addition that I liked the most is the ability to replay enemy camps as well as duels. While you can’t exactly replay missions, I did like the fact that I can replay duels and enemy camps if ever I wanted to experiment with the combat, or just want to experience them again. What’s great is that this feature isn’t limited to Iki Island, meaning you can replay camps and duels even from the main game. This is especially useful if you have already finished Ghost of Tsushima and are coming back to play the Iki Island expansion, as this allows you to re-learn the game’s mechanics easily.

The additions and improvements above are available in both the game’s PS4 and PS5 versions, but the PS5 version does come with some exclusive features. For instance, there’s the improvement to the Japanese language option. On the PS5, the Japanese dub has proper voice sync thanks to the improved hardware that enable cutscenes to run in real-time. This is a small addition, but it’s a welcome one, especially for players that prefer the Japanese dub. 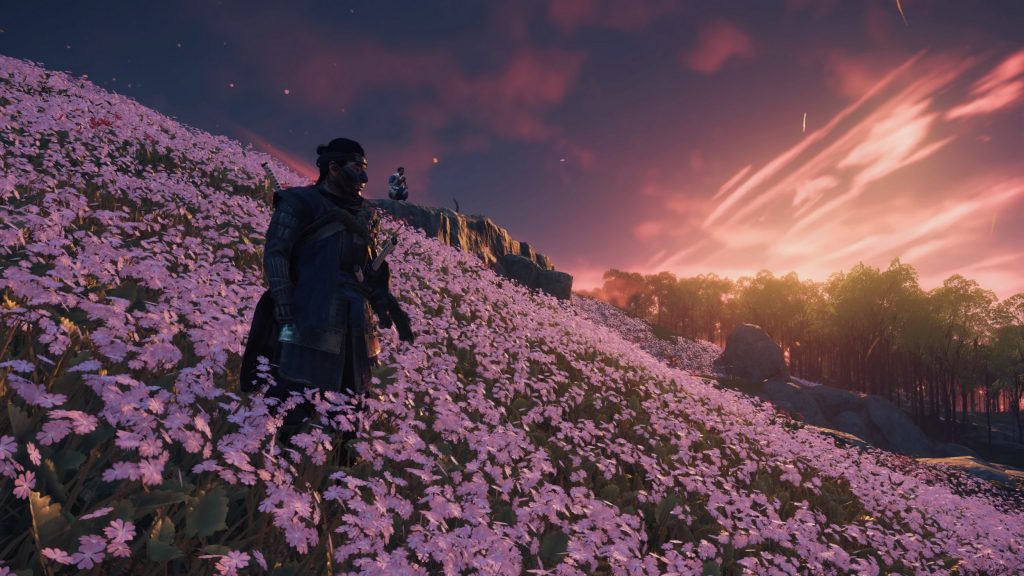 Of course, the PS5 version also comes with 3D Audio and DualSense enhancements. As a fan of 3D Audio, I was happy that the game implemented it well; even though it didn’t really prove useful for me in terms of gameplay, it did add extra immersion while playing. The DualSense’s haptic feedback was also nicely implemented, with the controller accurately depicting the feel of walking or galloping through different surfaces (not unlike Astro’s Playroom). Finally, the game also makes use of adaptive triggers when using a bow and arrow which is quite nice personally. Though if you don’t like these effects, you can turn them down or off entirely in the game’s settings.

Now for its performance, this Director’s Cut ran like a dream on PS5. In my playthrough of the game, the game ran smoothly and at what seemed to be a steady 60FPS (that’s just based on the eye test though). Visually, the game is also beautiful, especially on a big TV/monitor. Though in terms of graphical fidelity, this isn’t on the level of true PS5 exclusives such as Ratchet & Clank: Rift Apart or the Demon’s Souls remake. That’s not a knock on the game though considering even the PS4 version of Tsushima was already a visual treat. 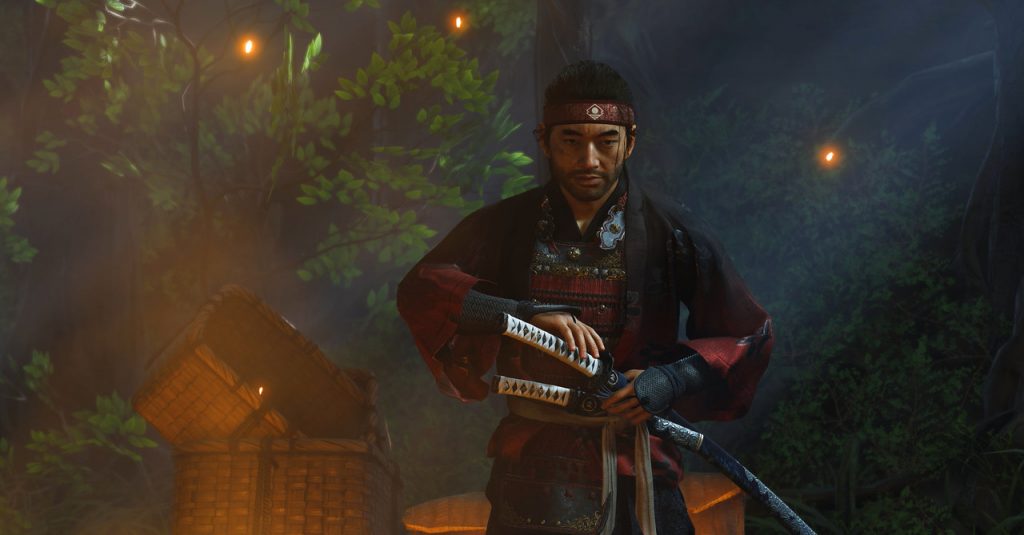 As an overall package, Ghost of Tsushima Director’s Cut is an excellent game that features a ton of new content, as well as a host of technical improvements, especially on the PS5. While it’s not a genre-defining work, it is still very much worth playing for gamers with a PlayStation console, especially for those who have yet to play the original since its release last year.

Sidenote: Should You Upgrade?

This game is highly recommended for new players; but what about those who have already played the original? Well, it’s fair to say that the Director’s Cut is the definitive edition of Ghost of Tsushima, though its upgrade options are on the expensive side.

It would’ve been better if the Ghost of Tsushima Director’s Cut PS5 enhancements were free, with the Iki Island expansion being available as a DLC (similar to what FF7 Remake Intergrade did). Better yet, it could also have followed what Death Stranding did as the game’s upcoming Director’s Cut upgrade is only priced at USD 10 (around PHP 500).

While it’s expensive, I can still say that this upgrade is worth getting for players who loved their time Ghost of Tsushima, especially because of the wealth of content available.

*This game was reviewed using a PlayStation 5 via a review copy sent by Sony Interactive Entertainment Singapore.

Ghost of Tsushima Director’s Cut is an excellent package that's highly recommended for players who have yet to play the original game. But for those who have already finished it, the Director's cut upgrade is a bit on the expensive side. Still, fans of the original will have a great time in this new version.Ghost of Tsushima Director’s Cut Review | The Definitive Edition