Hades Review (PlayStation) | A Great Port of an Excellent Rougelite

Embrace death all over again. 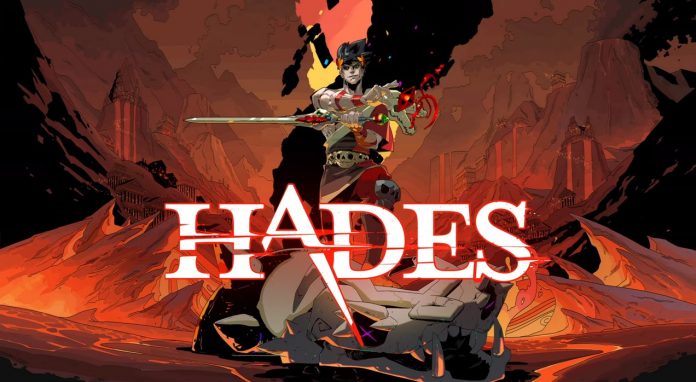 The live-die-repeat cycle of Zagreus’s escape from the underworld received tons of praise when Hades first came out for the PC and Nintendo Switch last year. It’s often mentioned that Hades branched out from Supergiant’s previous titles like Pyre and Transistor in terms of storytelling and world-building, as Hades managed to combine both its gameplay and world-building into one solid experience, deserving every praise that it received.

Now, almost a year later, the ever-changing underworld of Hades is moving to other consoles, ready to challenge those who dare to escape its clutches on the PS4, PS5, Xbox One, Series X/S.

*The game suffers from the same problem as Vegeta (The Planet, My Son or Me?), so to avoid confusion, I will refer to Lord Hades the person, Hades to the game, and simply call the place ‘the Underworld.’

Slash and Slice your way up 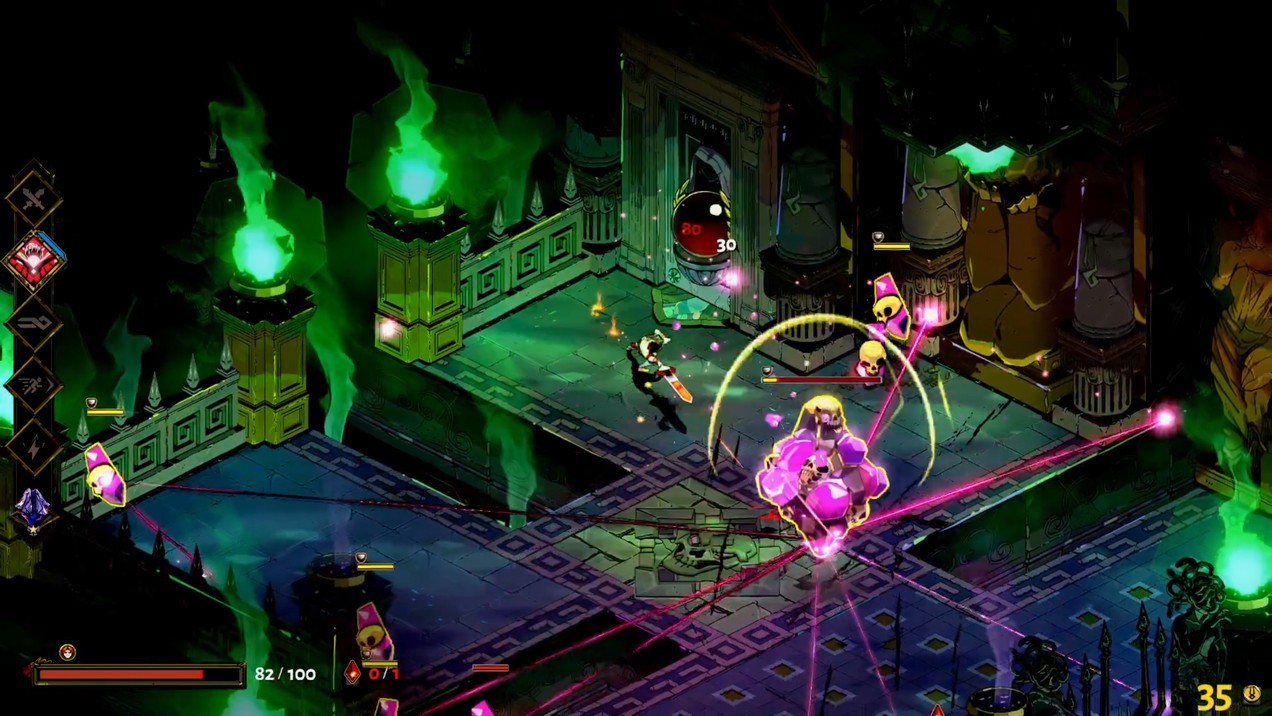 For Zagreus (the Son of Lord Hades) to escape his sweet home the Underworld, he must fight hordes of enemies inside the ever-changing underworld dungeons, which are designed for no living nor the dead to escape. These randomly generated dungeons follow the theme of the current floor, like the lava-filled Asphodel or the lush Elysium with changing enemies every time you inevitably revisit these dungeons again and again. 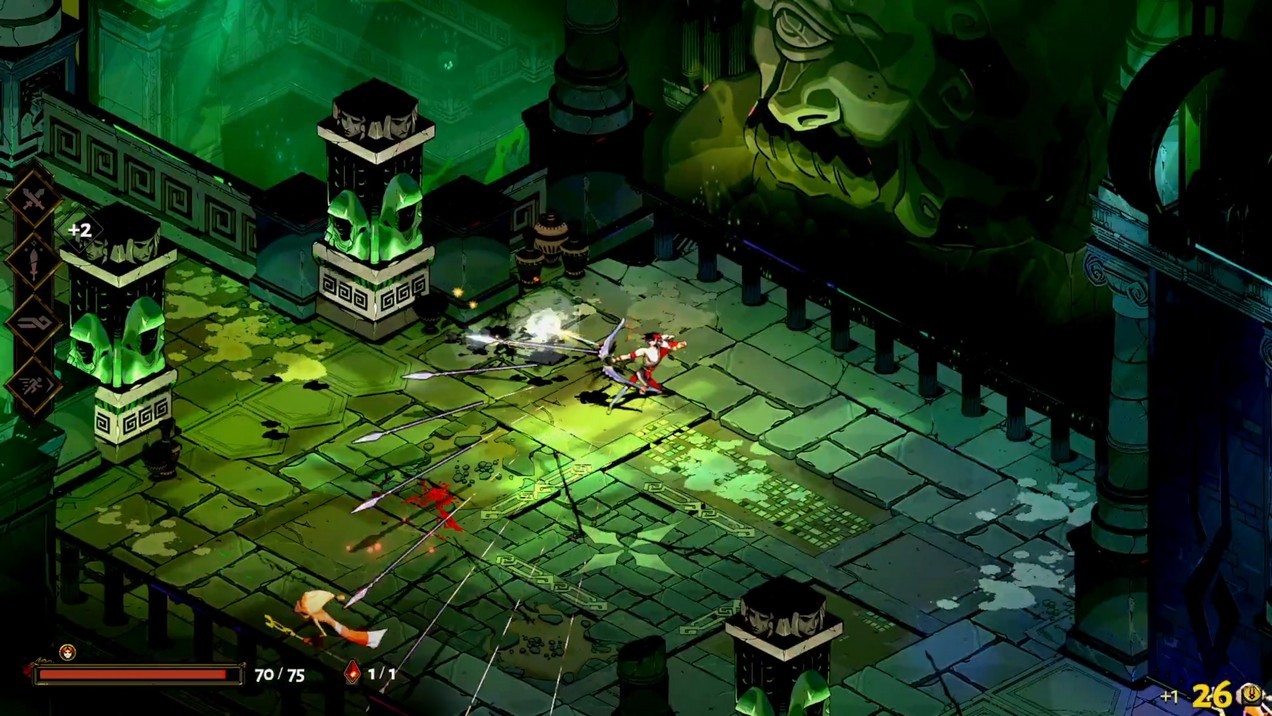 Thankfully, Zagreus is a skilled warrior quick on his feet and can wield awesome weapons like a sword, spear, or a bow, and other weapons that he can obtain and unlock along the way through his escape. The simple four-button input feels just right for the fast-paced battle and simple combat system, as you take on hordes of enemies in each dungeon room. But don’t get the wrong idea, just because I said the combat is simple, it doesn’t mean that fights are easy as enemies can overwhelm you by their numbers. Plus, there are many rooms that are filled with hazards ready to send you back to Daddy. So, even though it’s tempting to spam your attacks and dashes, it’s better to be calculated on each step you take to safely proceed to the next challenge. 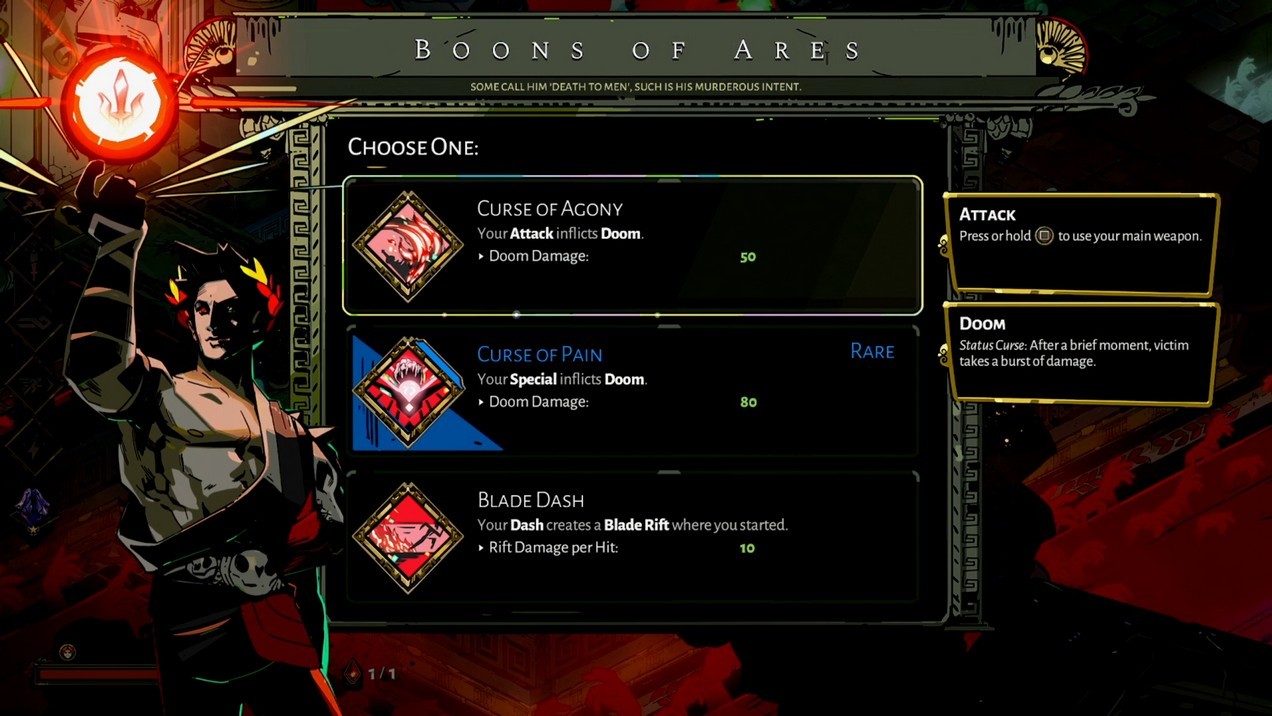 Zagreus can also gain the favor of the Olympian Pantheon, granting him godly blessings or Boons, infusing his attacks depending on the God that he made contact with. You can choose among the three choices of abilities which are all randomly available every time you make a contact with these certain Gods. Boons can be mixed and matched with other Boons if you managed to receive another blessing from a different God. Interestingly, when Zagreus is presented with two choices between two Gods at the same time, accepting the Boons of the other will incur the wrath of the neglected God, adding more challenge to your current room until it lasts so be on guard when this happens.

When the inevitable fate of death embraces you during your underworld trip, you’ll have to start from scratch and climb again, but not entirely. It’s true that you’ll lose all the boons and power-ups that you gained from that single run once you die, but dying is a way for Zagreus to grow in power. You can permanently upgrade his stats before you challenge the underworld all over again or place new architectures in the dungeons in the Hades Hall.

So yes, in case you didn’t know or haven’t guessed yet, Hades is a roguelite. But I’d say that it’s one of the more approachable roguelites as you do get some permanent upgrades, meaning starting over after dying doesn’t feel that furstrating. Plus, dying in this game does not only open up Zagreus’ potential, it also builds the world around the game by revealing key storylines.

Not a Phase Dad!! 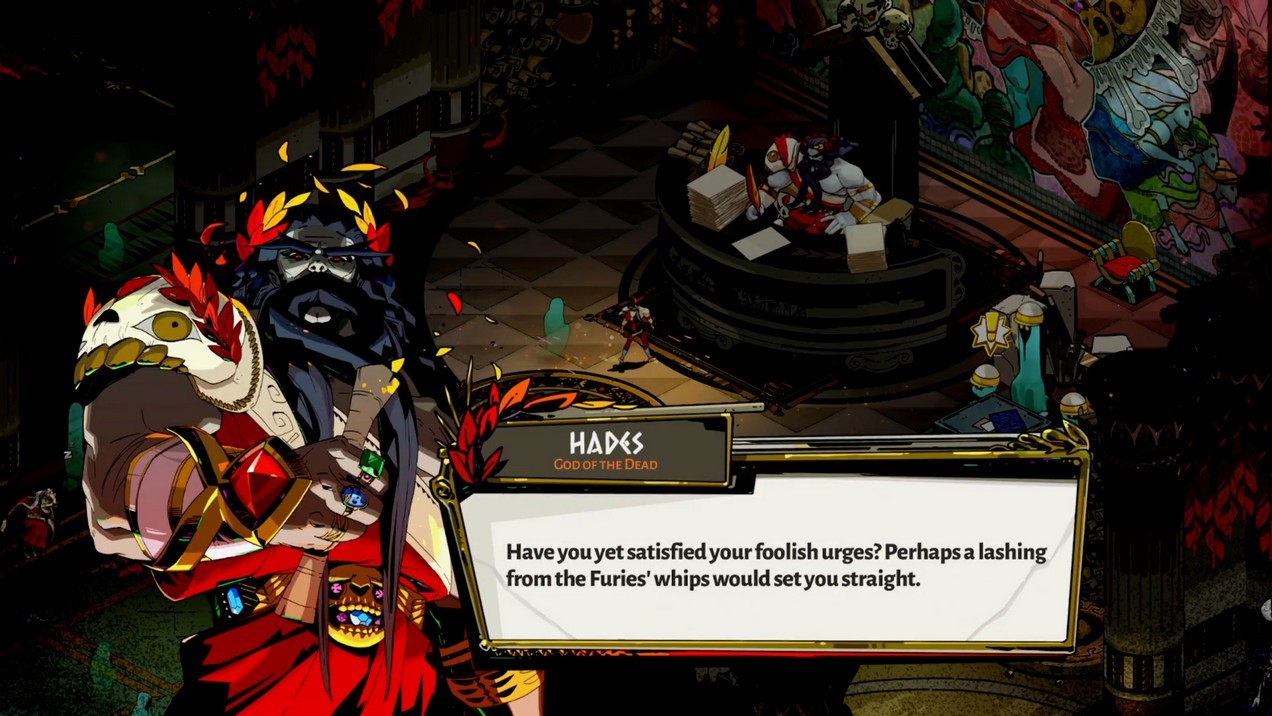 Hades is yet another retelling of Greek Mythology with familiar deities like Zeus, Poseidon, and Lord Hades. Here, you play as Zagreus son of Lord Hades himself as he tries to climb his way to the surface world. His motivation by doing so can be confusing at first and can only be revealed by dying over and over again. This is why dying is a key part to move the plot of the game. Each time you die and come back, you get to learn more about the world around you, with characters making remarks on how you died, whether they give sound advice on how to deal with the irritating enemies or just simply berate you for your futile attempts of escape. What’s even better is that, through the dialogue, they managed to flesh out the characters in the game, making them interesting and lovable once you get to know them even more. 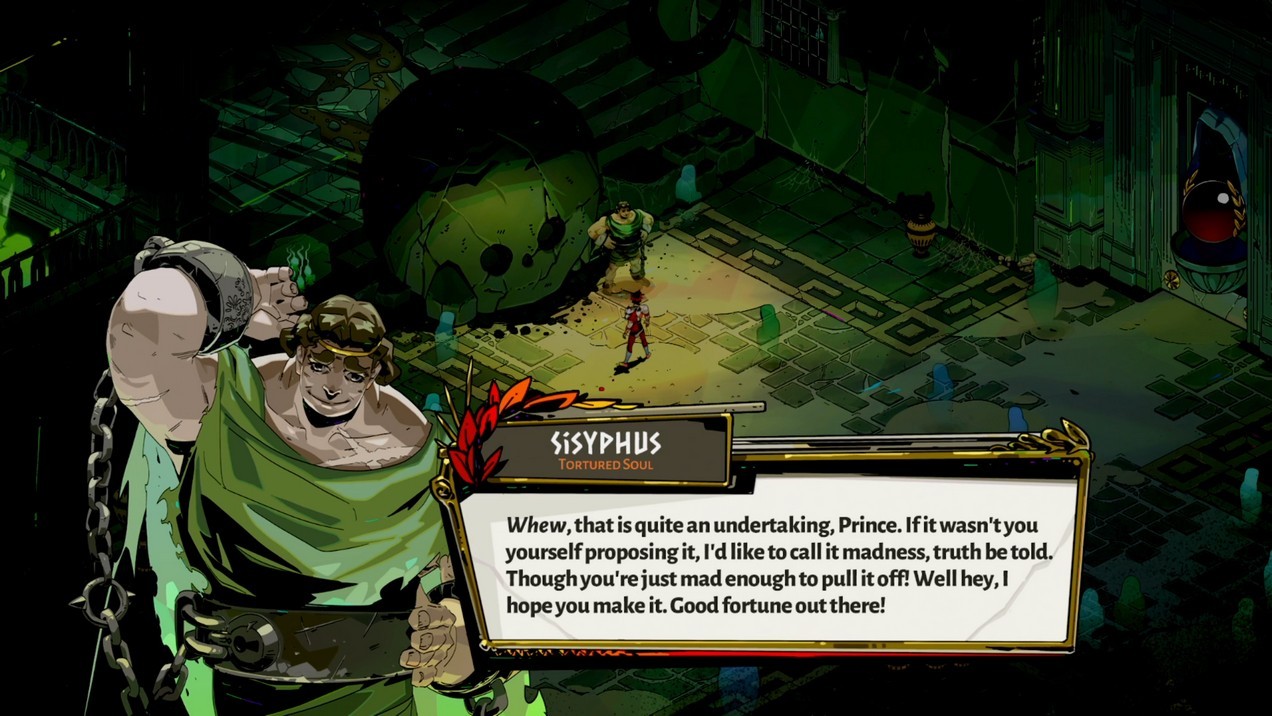 Every dialogue is fully voiced and sounds great, making every banter of each character feel satisfying to hear. Aside from friendly NPCs, encounters with bosses are also quite interesting as they remember your last encounter with them; whether it’s a win or loss, it always feels like someone is holding a grudge, ready to settle the score once again.

A feast for the Gods

There really is nothing else to say about the art direction, as it still has the same good art style from the past release. It’s still the same old but good 3D characters with well-illustrated backgrounds combined with a perfectly scored BGM. But in terms of technical aspects, this PS4 port outshines the Nintendo Switch port with brighter colors, consistent FPS, although I can’t tell if they tweaked the sound for the PS4. The only thing that holds this port is it seems Hades for the PS4 does not support the same cross-save support for the PC and the Nintendo Switch, so those who played the game before probably have to start from scratch. Although, at this point, they’re probably used to it

As for the PS5 experience, the game plays even better on the new Sony console. While both versions target 60FPS, the PS5 has the resolution advantage as it runs at 4K. This means Hades looks noticeable sharper on the PS5, especially if you’re playing on a 4K display.

Though the PS5 version is technically better, playing Hades on PS4 is still a smooth experience, so you won’t miss out on much if you still can’t get your hands on a PS5.

Hades still holds up the same appeal it has from its initial release making it one of the roguelike titles available for purchase. The simple yet punishing gameplay, and progression through death is a wonderful formula that this game amazingly pulled off. Pair it with a compelling storyline and likable characters you wouldn’t mind dying many times just to visit the denizens of the Underworld. Not to mention you can pet the Cerberus making this game a good pick up for those who haven’t tried the game before.

Hades still holds the same flare it had since its initial release last year, making it a must try roguelite game, even for players that are new to the genre. With it's wonderful gameplay, smooth BGM, and a compelling storyline, you wouldn't mind dying over and over again. Plus, this port is just perfect for those who haven't tried the game before.Hades Review (PlayStation) | A Great Port of an Excellent Rougelite