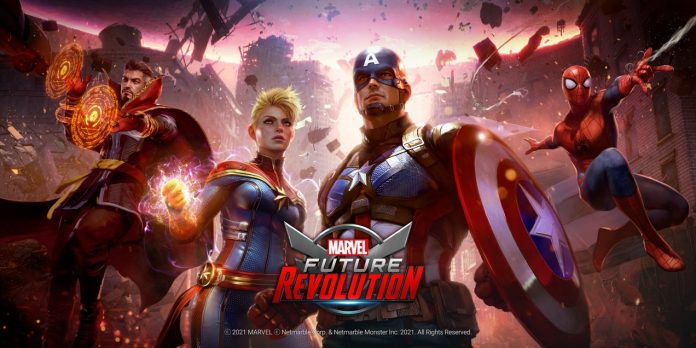 The introduction of the Multiverse in Loki opens up crazy possibilities in the MCU, which also introduced us to the possible major villain of the franchise after Thanos. But we have to wait for the next season of Loki or the next movie installment to further explore the Multiverse. So, if you’re looking for something to fill this gap during the wait, you better look forward to this new game by Netmarble. Marvel Future Revolution is an upcoming open-world RPG that features characters from the Marvel franchise!

While it’s not the first Marvel game for mobile, Future Revolution is shaping up to the the biggest yet. At least, that’s our initial impressions of it when we got to try the game out ahead of its release later this month.

Wherever I go, I see Familiar Faces 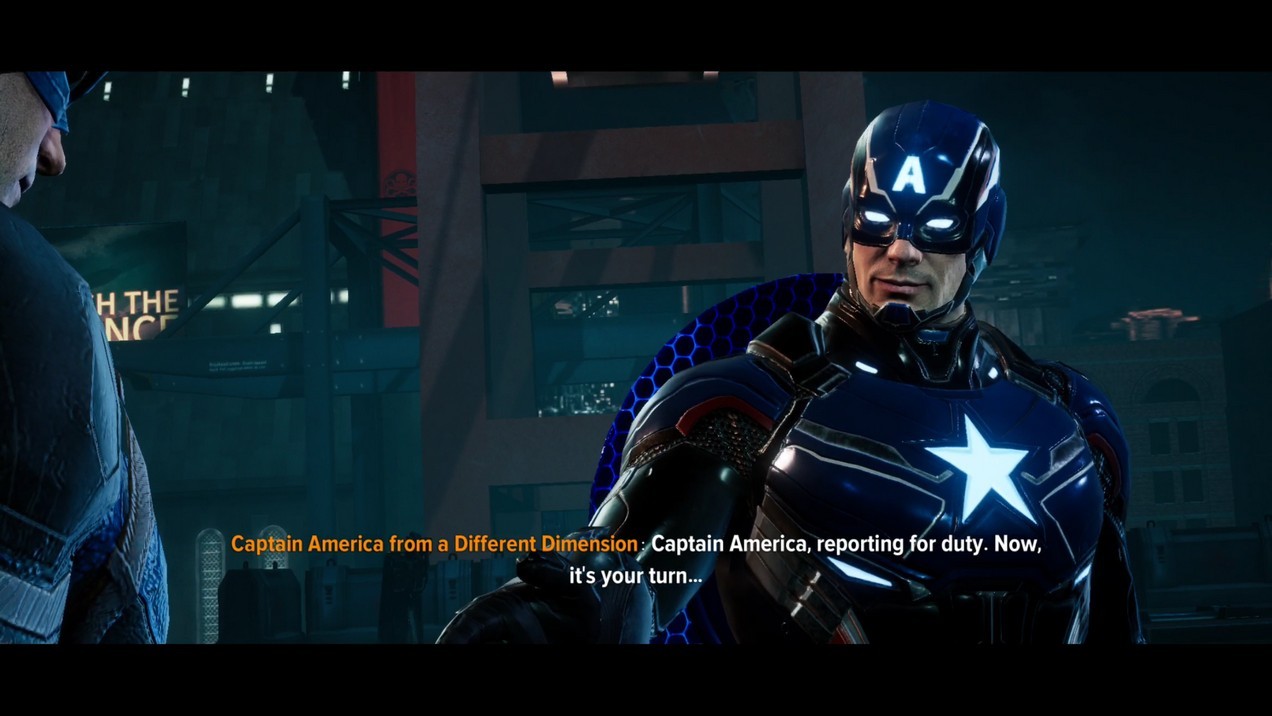 Everyone is here (almost) as the game features Captain America, Iron Man, Doctor Strange, Captain Marvel, Black Widow, and Spider-Man; complete with villains like Kingpin, M.O.D.O.K, The Red Skull, and Ultron. They are all gathered in this world of superheroes and supervillains, clashing with each other serving their own purpose, so expect a massive world of flashy battles left and right.

But what makes this game even more massive, at least in terms of narrative, is that many Earths from different dimensions merged together in one place that leads to different versions of our heroes and villains meeting. So prepare to get lost in a massive open world that came out straight from the comic books. You are free to explore places like the New Stark City built by Tony Stark himself, with many Ultron drones ready to help its citizens. But as we know, the name Ultron spells trouble, so expect enemies to be roaming the places you visit like those drones and Hydra agents. 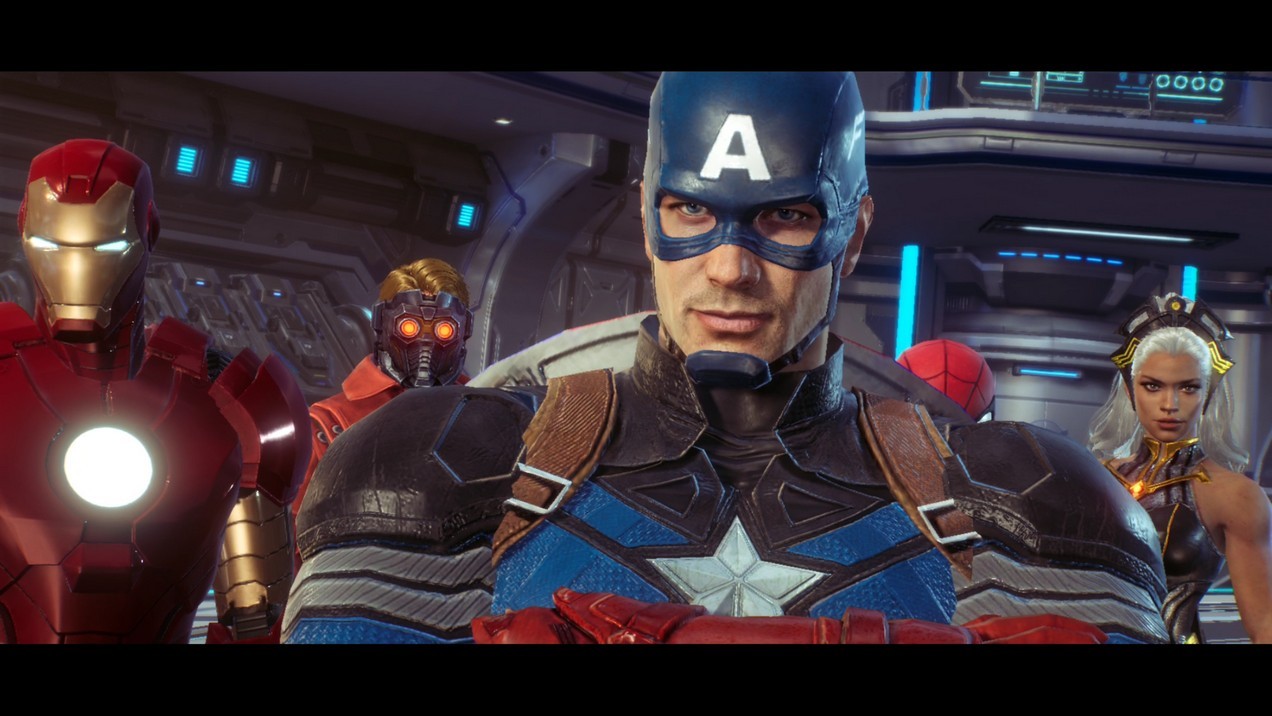 But with a massive world, it’s easy to get lost and be overwhelmed by the things we see around the places we visit, but thankfully, Future Revolution gives tons of assistance to the player like the auto-navigation button that lets your character go towards your next objective. Meanwhile, if you ever get tired of the narrative and want a bit of a change of pace, you can either engage in some NPC side quest that or team up with other players currently playing to take on world bosses, so you won’t feel either lonely or run of out things to do before you proceed to the next part of the story. 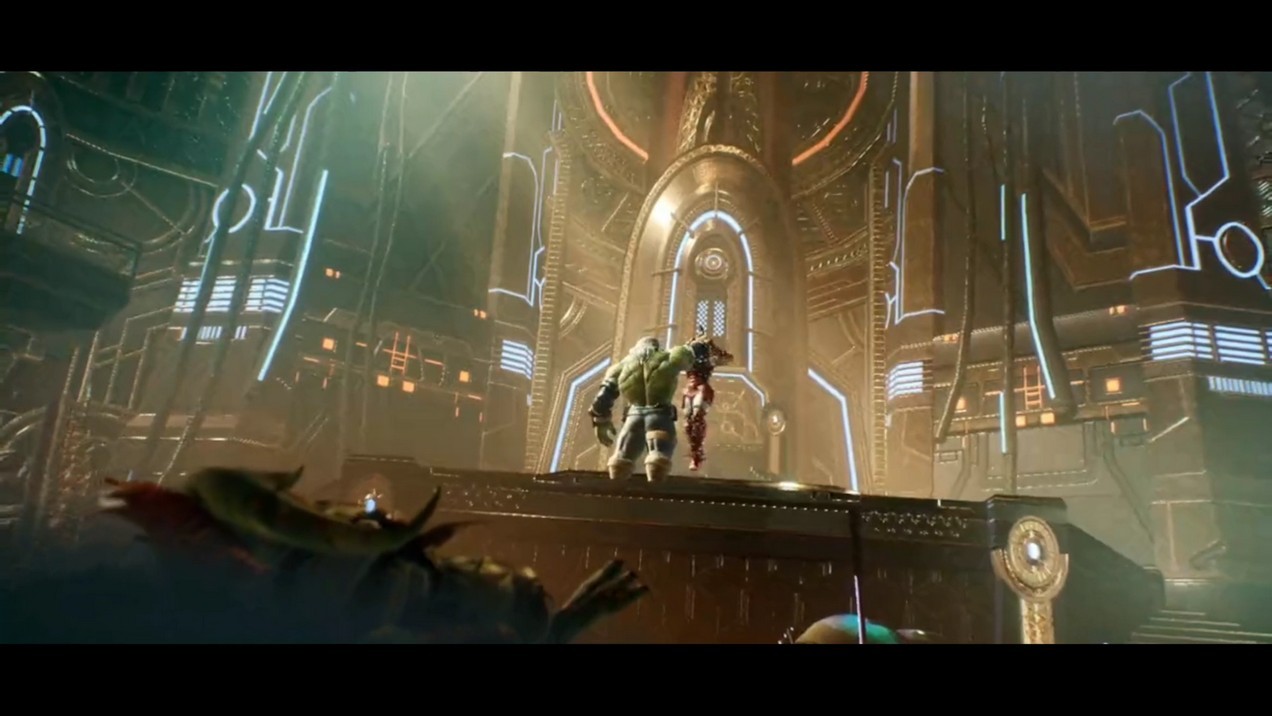 If that doesn’t sound something from a comic book storyline then nothing else is; but what makes this an interesting opening is every starting Hero has their own starting point where you can get a glimpse of alternate realities like Hydramerica, a world where Hydra won the WW II and Captain America struggles against his mortal nemesis the Red Skull. Each starting story serves as a tutorial stage for your current hero so you can get an initial feel on what the gameplay would be and if that certain hero suits your playstyle. After finishing the introduction, you’re now free to venture into this new Earth helping its citizens and keeping the peace from evil. 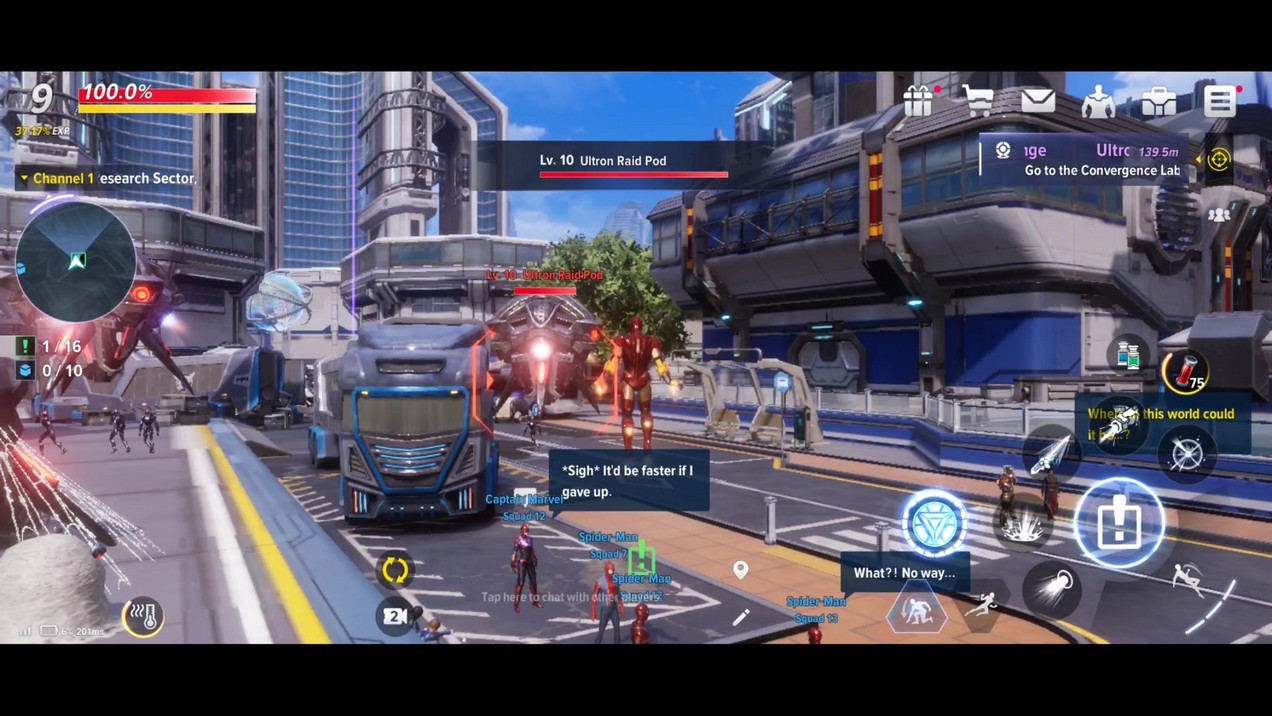 Marvel Future Revolution feels like an MMORPG with an familiar combat system. And just like in any other Mobile MMO these days, MFR also utilizes the auto-play feature, making the navigation and combat easily done with just one tap of a button. 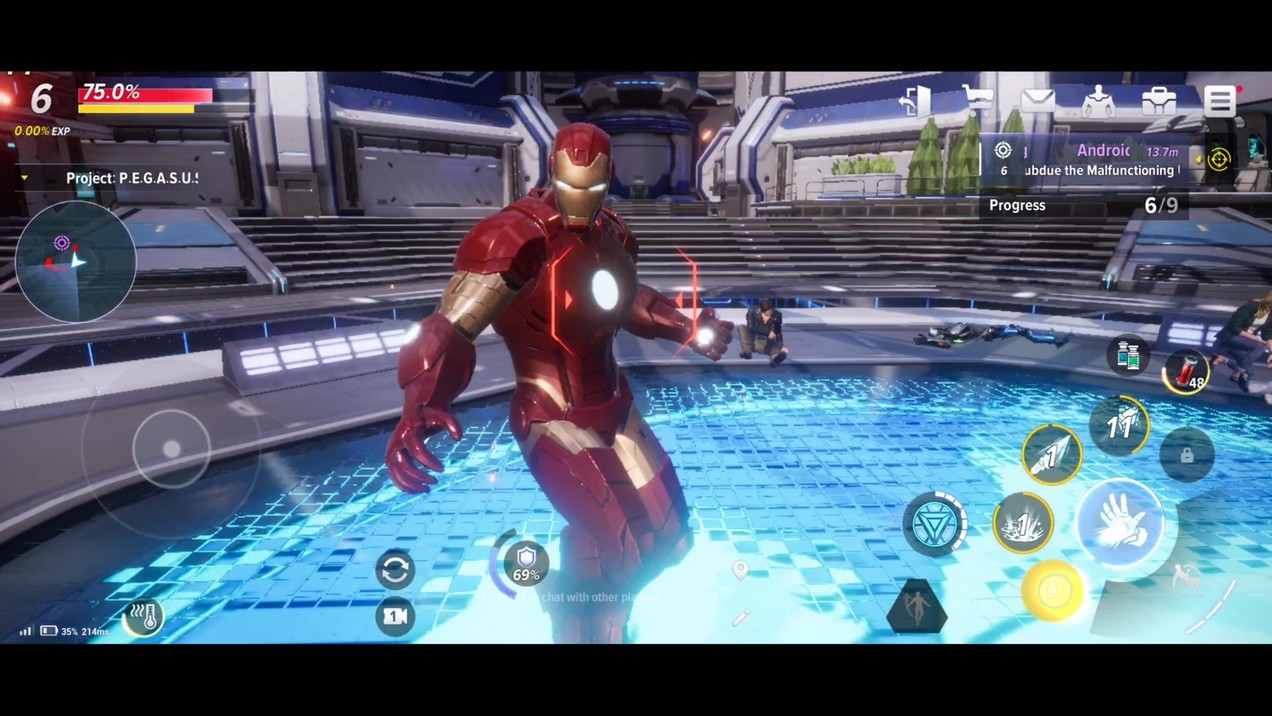 This auto-play feature is always welcome to mobile MMOs considering most of the time, objectives can be bland with repeating conditions like kill a certain number of mobs and move on to the next point and do the same thing. But it doesn’t mean that you can just leave your Hero to fight his battles all alone. As expected Boss battles take a bit longer to go down than normal mobs since they unleash huge attacks that you have to pay attention to dodge. Thankfully, the dodge button and your current character warn you when to perfectly dodge these said attacks from the Bosses. You can also upgrade and unlock various abilities for your Hero that you can customize, so you can build a character depending on your fighting style. 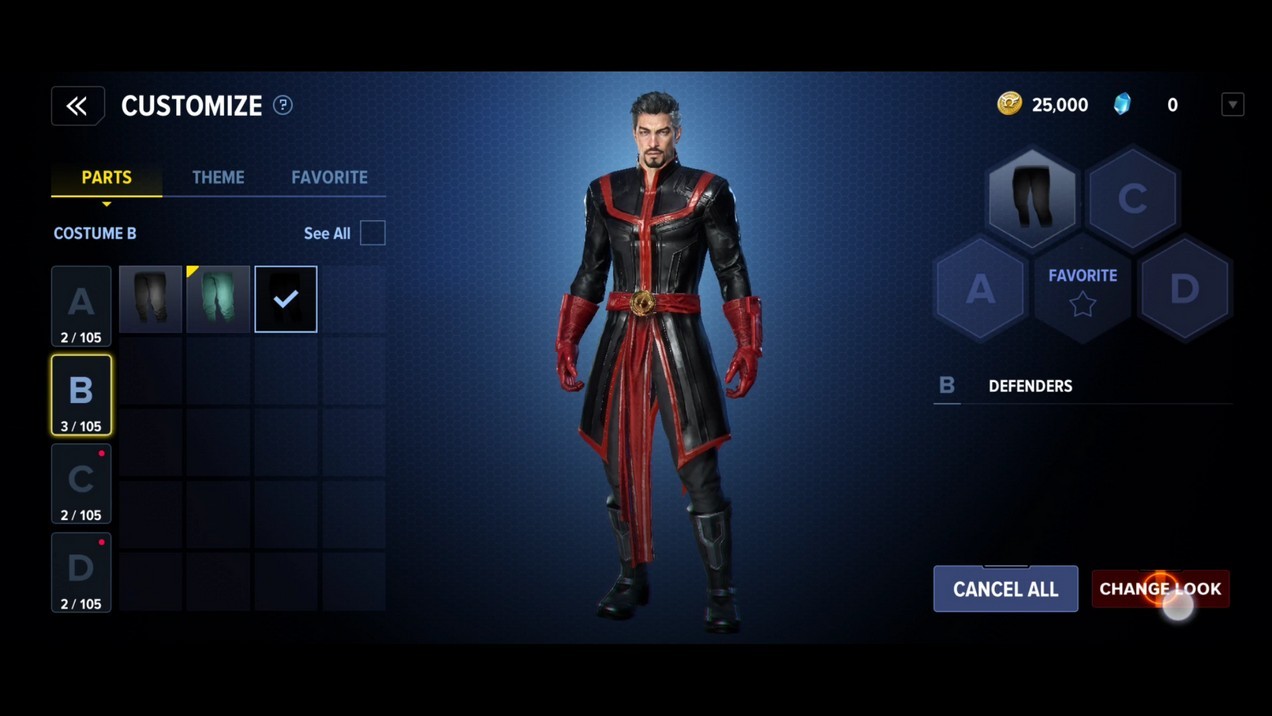 The only problem with this auto-play feature is when you finally managed to reach the highest level you can just let the game itself play. It’s not a real problem for those people who tend to do other stuff while playing, but it might not appeal to those who want to feel some challenge and action themselves in their game. So, if you’re more of a hands-on type of gamer you’ll find Future Revolution’s combat and gameplay less appealing for your taste. 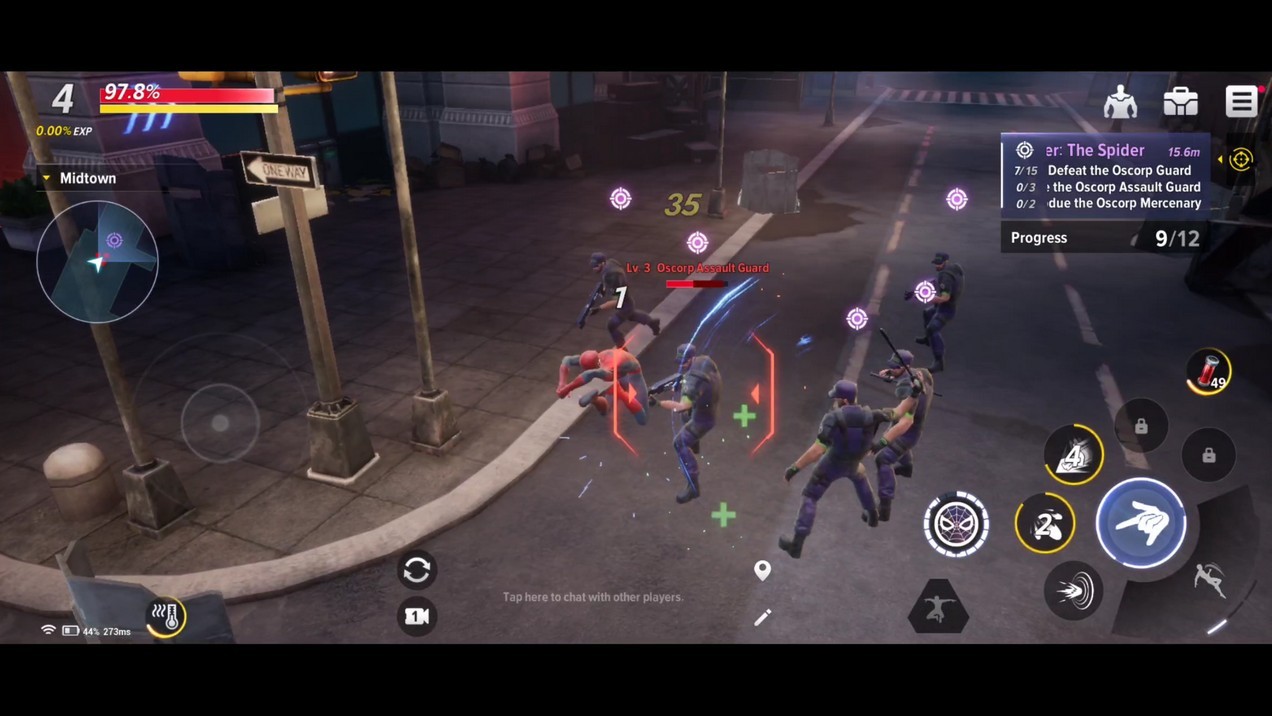 Although the combat system may not appeal to some, the customization may pique a lot of interest. There are just lots of costumes to collect scattered around the world, and the best part is, you can mix and match these costumes, so you can make a unique Superhero with a unique set of abilities that you truly desire. Think of it it like your Spider-Man came from your own Multiverse. 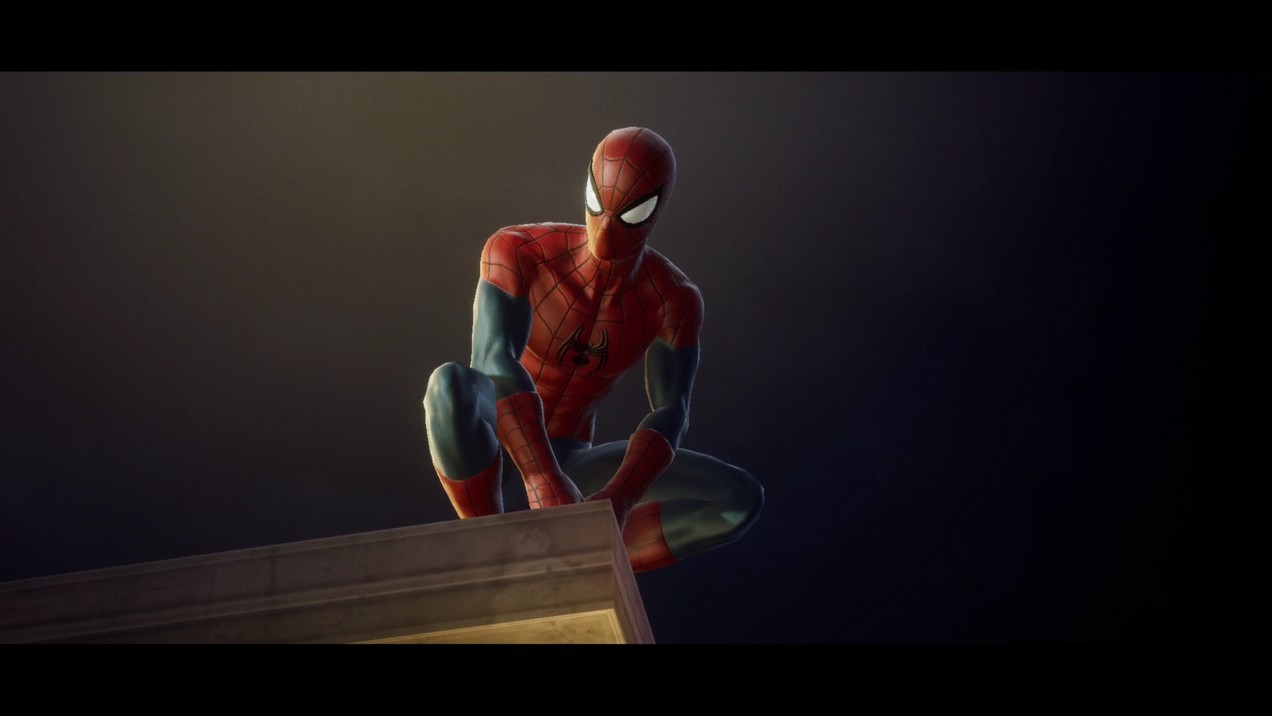 It’s not fair to talk about the technical aspect of the game since the game is in early build, but even in this early build, Future Revolution looks great even in medium settings. Characters are fully voiced during cutscenes and well detailed the sound effects during attacks are all in place, so you can expect a high quality game once it’s optimized when the game fully releases. It’s also worth to note that the game has its own system stabilizer so it won’t overheat your phone when you run the game in maximum settings.

Since the game is in early access, it’s still too early to give the game a final verdict, so we won’t be talking about the monetization or the game’s content as of now. But it is safe to say that Marvel Future Revolution holds huge potential because surely Netmarble will definitely release future updates and content for this open-world Action MMO.

Although the gameplay itself may need some tweaking to make it more interactive or perhaps more challenging for players who looks for a good grind, the overall concept of a metropolis full of Heroes is something that Marvel Future Revolution managed to pull off quite well. Couple with the fact that the game looks good even in early access, Marvel Future Revolution is shaping up to be a good pick for casual and hardcore Marvel fans to play.