Mock the Saiyan monkeys with this smol Frieza! 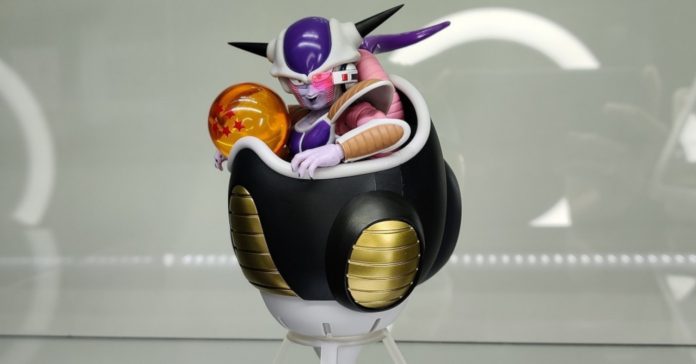 Last time, our friend Francis N went Super with Bandai’s Figure-rise Dragonball Z Standard Son Goku, as he built the model kit and transformed Standard Goku into a Super Saiyan God. This time we’re lucky to have a look at yet another toy by Bandai’s Tamashii Nations, the S.H.Figuarts DBZ Frieza First Form with Frieza Pod.

This version of Frieza is his first form when he made his introduction in Dragonball Z’s Namek Saga, as he and his army pillage the whole planet Namek of its Dragon Balls to grant him immortality after learning about it from Vegeta. But we are not here to talk about the anime, so let’s talk about the toy. First, the packaging is pretty standard for this S.H Figuarts toyline, with a window box letting you have a sneak on the actual content and things you can do with the toy.

Now, for the actual toy itself, Lord Frieza in his first form is the less threatening of the four forms he has in the Namek Saga. But with those two horns and black lips, you can tell right awayt that he’s evil, and upon touching the toy, you can tell right away the quality of the plastic that they used is of high quality. Having a closer look, you can tell some are painted like the faceplate, shoulder pads, the tail, and his fingers, while the rest of the toy is molded plastic. The paint looks durable enough to last long, so you won’t have to worry about paint chipping. But keep in mind it’s not scratch resistant, so try to be gentle, especially on the glossy parts like the forehead and the chest plate as those parts are highly susceptible to scratches.

The overall appearance of this toy is pretty good as it managed to get the likeness of Frieza first form from the anime. The only thing that I can nitpick about is the inconsistent violet color on the tail part, especially compared to the chest plate and forehead piece, since the tip of the tail is painted while the chest and forehead piece are made of glossy plastic. For the faceplate itself, the eyes compared to the promotional image on the box looks a bit smaller, whether they made magic with the photography of this image or photoshop is beyond me, while the neck part does not fit entirely no matter what I do. Regardless of this and the other small detail mentioned before, it is not a real issue and does not affect the overall appearance of the toy, unless you stress about those kinds of details.

For the accessories, Frieza comes with five faceplates plus an extra headpiece, six interchangeable hands, a tiny Death Ball, Scouter, the Five Star Namekian Dragon Ball, and one of the centerpieces of this toy Frieza’s Hover Pod. Each faceplate has varying expressions from an irritated face, two smug faces, and two screaming faces each can be fitted on its designated headpiece.

Changing Frieza’s expression is fairly simple; all you have to do is remove the whole headpiece from the neck and pull the faceplate to change it with your desired expression. Another thing about the faceplates is you can remove Frieza’s left ear and fit the included Scouter which is compatible with every faceplate (letting him hunt the whole Planet Namek for any remaining Namekian). Again, a faceplate is only compatible with a certain headpiece, so try not to force a faceplate if it doesn’t fit. And one thing worth noting is that the extra headpiece won’t fit immediately into the neck’s small ball joint, at least on this particular figure.

So, if you have the same problem, try to loosen it with a small screwdriver. I loosened mine with a small hexagon bit making the headpiece a perfect fit without the worry of breaking the tiny ball joint.

Meanwhile, the six swappable hands consist of a fist, open hands, and a pointing finger with the pointing finger you can fit the tiny Death Ball effect so Frieza can sling his planet-destroying blast.

Now, for the Hover Pod itself, it is pretty great with the majority of it is in matte black color with metallic gold and white trim. The inside of the cockpit is not just a hollow space as it comes with detailed red seats and a well-detailed control panel. To let Lord Frieza ride his Hover Pod, you have to do a little bit of foreshadowing on his fate in Namek by splitting his torso and connect his upper body and his tail to a fixed hip part inside the pod. You may want to be careful connecting the double ball joint to the upper body though.

But once you get the hang of it, you can finally recreate the scene where he obliterated Planet Vegeta with the Death Ball effect. The Hover Pod won’t stand on its ownm but thankfully, the included stand solves this problem. Finally, the last accessory included is the Five Star Dragon ball made out of clear orange plastic. It doesn’t do much on its own, but you can let Frieza carry.

The Figure is poseable thanks to its double ball joints, while both of the shoulder and knees have double bend joints. The shoulder pads can both move so they won’t hinder the movement of the arms, but they can get in the way of the head since the shoulder pads can only move up and down. Frieza can do much of the dynamic poses, but his neck has limited range of bend; try to see the Jack-o challenge image so you can tell the limit of his articulation. He can stand on his own due to the design of his feet, but his tail can weigh him down, though the tail itself can act as a support. Although, you can still make poses while his tail is lifted from the ground, you just have to find a good angle to do so.

Overall, the S.H. Figuarts DBZ Frieza is pretty good, especially for those who collect the DBZ S.H. Figuarts toy line. I don’t have the other toys from the same series, so I can’t tell if the proportions are correct from the show, but Frieza in his first form was always been a small guy, and comparing the size of the toys that I have, it seems that’s just the case. Although there are few things that you must fix yourself out of the box like with the extra headpiece being a tight fit, it can be fixed by a simple step. There’s also the color of the armor and tail having a different shade of violet, and the gap in the neck area kinda irks me. Overall though, these are not big issues and they don’t get in the way of this particular figure. It’s still an awesome and show-accurate piece and a must-have for DBZ fans.

Many thanks to GreatToysOnline for letting us review this Frieza figure. If you want this particular figure, more S.H. Figuarts, or other collectibles, head on over to shop.greattoysonline.com.