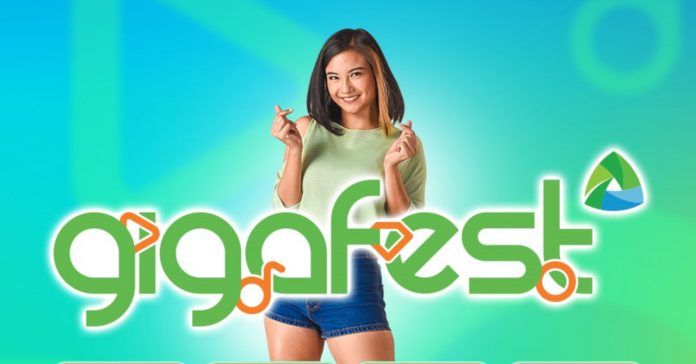 Smart is turning September into a month of incredible surprises, exclusive treats, and world-class entertainment as it kicks off GigaFest, its season of giving back to all loyal and new subscribers which is made even grander by the first anniversary of the GigaLife App on Sept. 19 or 0919 – Smart’s popular mobile network prefix.

A one-stop app, the GigaLife App brings together all the digital needs and rewards of Smart subscribers right at their fingertips, powered by the country’s fastest mobile network.

Over Php919 million worth of freebies and rewards

Since the launch of the GigaLife App, Smart has given away over Php919 million worth of data freebies and exclusive rewards for users. This is about to get bigger as Smart is celebrating app’s anniversary with more GigaDay Freebies on the GigaLife App on Sept. 19 from 9:19 a.m. to 1:19 p.m., so make sure to download it on the Apple App Store or Google Play Store.

“Since we launched the GigaLife App, it has made the life of our subscribers simpler and more rewarding in line with our commitment to bring amazing experiences to Filipinos through cutting-edge technology made simple by Smart. This is why we’re putting it at the center of our GigaFest celebrations, and we’re pulling out all the stops to show our gratitude to our subscribers who have made the Smart move and continue to entrust their digital lifestyle to us,” said Jane Jimenez-Basas, SVP and Head of Consumer Wireless Business at Smart.

Giga concert experience for subscribers via GigaPlay from Sept. 18 to 26

Returning to headline this year’s GigaFest celebrations is the 2021 iHeartRadio Music Festival which will feature performances from Billie Eilish, Coldplay, Dua Lipa, J Cole, Khalid, Maroon 5, and other top artists on Sept. 18 and 19, from 10:30 a.m. onwards (Philippine Time).

On the other hand, Hallyu fans can expect to see their favorite K-Pop artists and acts including AB6IX, ATEEZ, MAMAMOO, PARK JIHOON, THE BOYZ and more from Sept. 18 to 26 during the fifth season of KCON:TACT, a major convention and music festival celebration of Korean pop culture and entertainment.

Smart subscribers can watch these concerts through the Philippine-exclusive streaming on the GigaPlay App, a new app that gives users free access to content curated for Filipinos’ passion for sports and entertainment. Subscribers can download GigaPlay on the Apple App Store and Google Play Store, and enjoy streaming live and on-demand content while connected to Smart mobile data anytime and anywhere.

Aside from having front-row seats to virtual concerts, subscribers can also use GigaPlay to stream the ongoing 46th season of PBA Philippine Cup and the forthcoming NBA season via NBA TV live, and the upcoming seasons of the UAAP games and the PVL, among other exciting content. 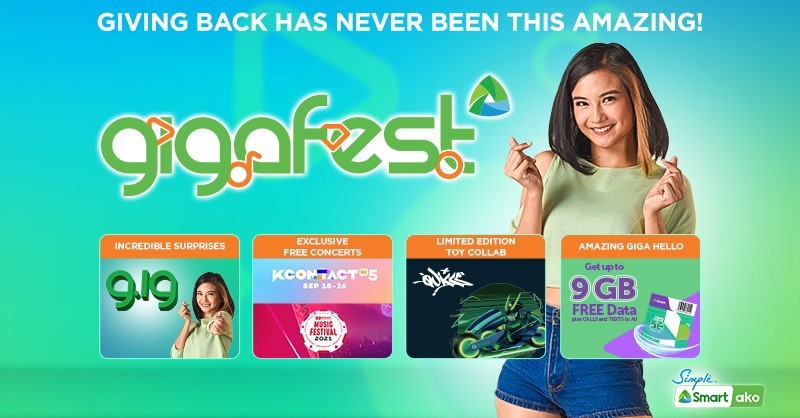 Smart Signature subscribers will also get an enviable chance to purchase a different version of the limited-edition Smart TEQ5G toy designed by world-renowned Filipino toy designer and artist QUICCS!

Eligible Smart Signature subscribers will get first dibs on updates via an SMS notification containing the complete mechanics on this exclusive one-day online fire sale.

Smart is also welcoming subscribers activating a new Smart Prepaid 5G-ready SIM with GigaHello freebies, which is inclusive of up to 9 GB FREE data, plus calls and texts to all networks so they have all the means to keep connected from the get-go.

To avail of GigaHello freebies, subscribers simply have to activate their new Smart Prepaid 5G-ready SIM, top up with P100 worth of load or offer, and download and register on the GigaLife App — it’s that easy!

Smart has also teamed up once again with Eplayment Corporation for the fourth season of Liga Adarna, the country’s biggest all-women Esports tournament starting Sept. 17. The tournament will feature four games, including Mobile Legends Bang Bang, Valorant, League of Legends: Wild Rift, and Call of Duty: Mobile, with exciting freebies for livestream viewers and fans on Smart’s Facebook page.