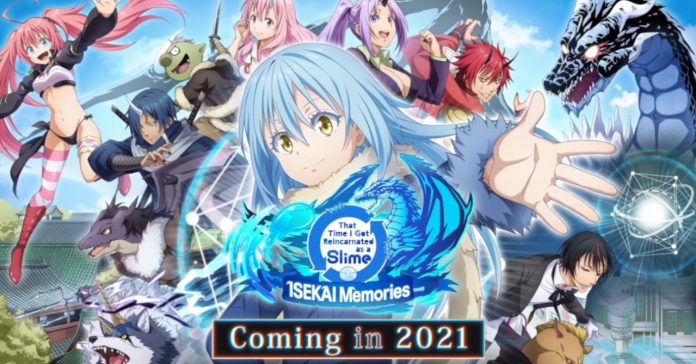 Bandai Namco has just announced that the mobile game ‘That Time I Got Reincarnated as a Slime ISEKAI Memories’ is releasing in English this year.

As with other mobile game launches, pre-registering for the TenSura mobile game will net you rewards, including power-ups, equipment, and more. The pre-registration campaign will also give players a chance to recruit Shuna in an exclusive outfit; this will be a reward when 300K users have pre-registered for the game.

In case you’re unfamiliar, That Time I Got Reincarnated as a Slime (commonly referred to as TenSura or Slime Isekai) is a light novel series that follows Satoru Mikami, a 37 year-old salaryman who dies and is reincarnated as a rather powerful Slime in a fantasy world. The light novel series started in 2014, and it received a (still ongoing) anime series adaptation in 2018.

Pre-register now for the ‘That Time I Got Reincarnated as a Slime ISEKAI memories’ mobile game at the App Store and/or the Google Play Store.

For more details about the pre-registration campaign, check out the special site at: https://ten-sura-m.bn-ent.net/en/pre-campaign.

In related news, aside from its own mobile game, TenSura is also teaming up with Ragnarok X for a new collab event.