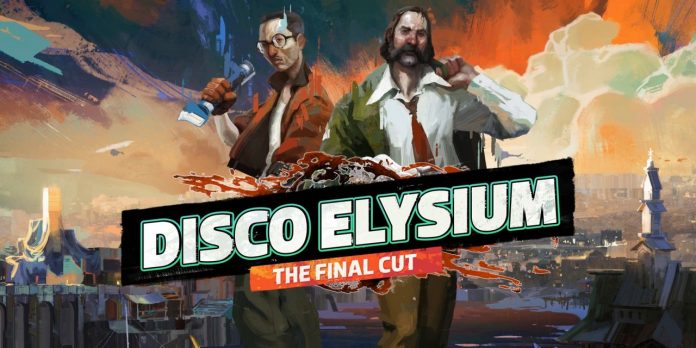 The Film Noir/Detective Noir genre never ceases to fascinate the audience with its gritty and melancholic tone, all while tackling matters directed to the current state of society, showing the darkest gutter of a luxurious Metropolis. It usually involves a crime connected to a conspiracy, all in the perspective of a hardboiled Detective who wants nothing but to resolve the case while seeking redemption from his inner demons. This kind of story always leaves a lasting impression on as it makes them wonder if our flawed Detective got over the case, as the outcome is not always what we imagined, leaving the Detective brooding. That’s the very same impression I got with Disco Elysium, and the definitive edition — Disco Elysium – The Final Cut — makes it even better.

Admittedly, I wouldn’t call myself an expert on the detective noir genre, though I still enjoy it from time to time. But I can confidently say that Disco Elysium – The Final Cut has that same gritty, melancholic charm. This translates through its presentation and compelling story, mesmerizing me enough to have me go through the whole game in a flash. 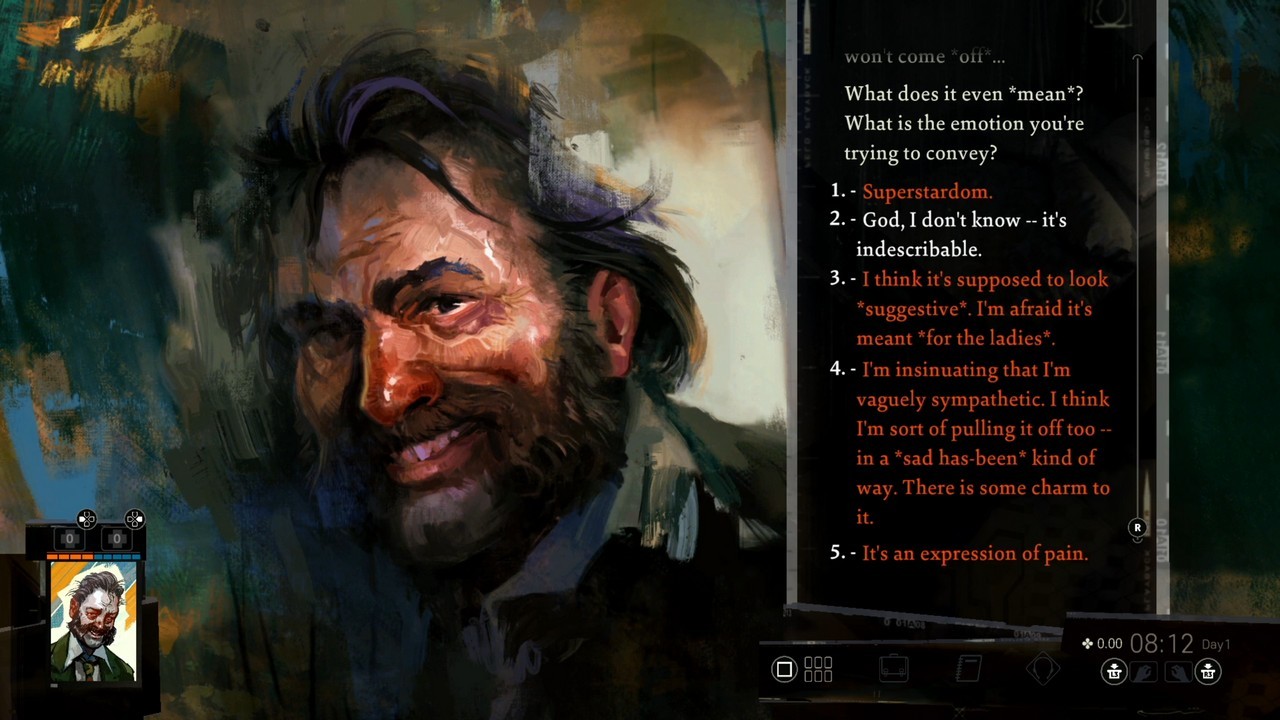 Disco Elysium opens in a rundown Motel where our half-naked character has his face down on the floor, waking up dizzy with no recollection of the events before his awakening (that we can only assume was the result of his alcohol abuse). Upon meeting with your new partner, Kim Kitsuragi, he informs us that a suspected murder case of a hanged man with no identity is assigned to us. From here on out, the story shapes according to our choices and interaction with the people of Revachol. I don’t want to spoil the story so I won’t put more details about it, but the twenty to thirty hour-long gameplay will leave you with an interesting puzzle to solve, and it is up to you to piece out the mystery together while learning about our detective. Compared to the original release, Disco Elysium – The Final Cut also adds tons of new side-quests, revealing more lore to the game, and giving more political commentary on this broken city. 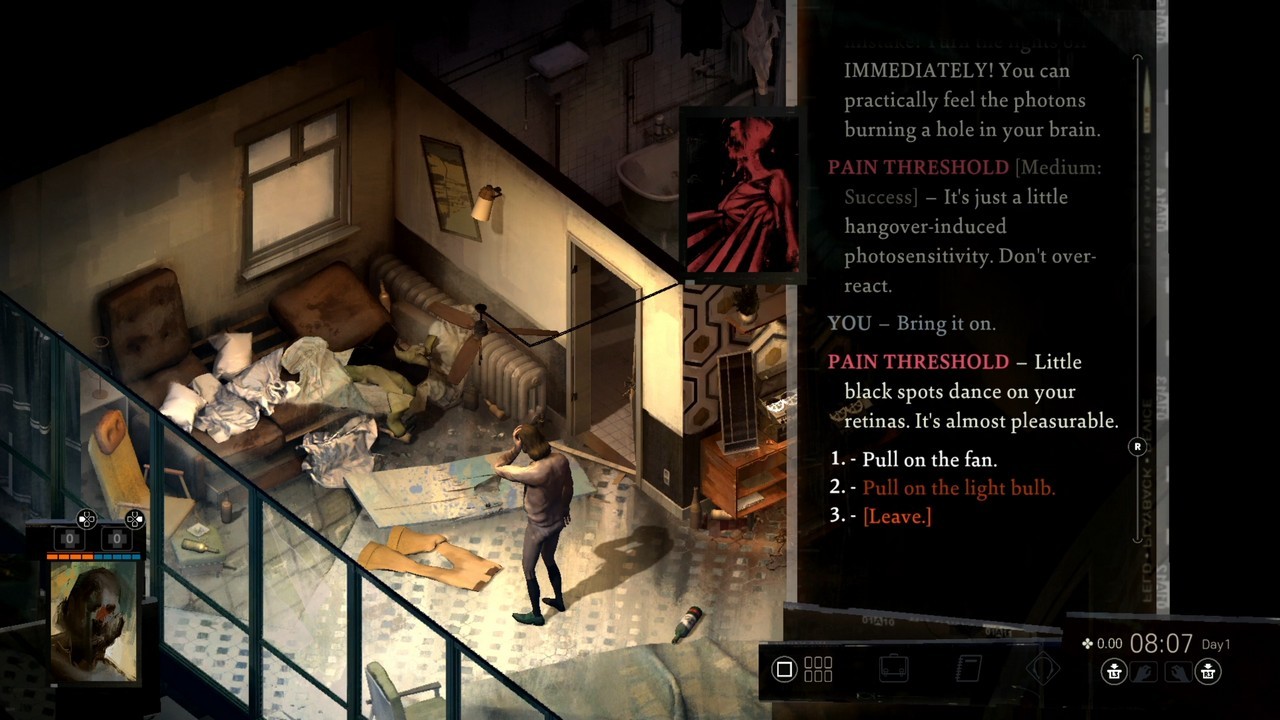 The presentation is just as good as the story, with the top-down view and hand-drawn art style truly complementing the deteriorating mind of our detective. And once you immerse yourself in your investigation, you’ll find yourself intrigued and at the same time unsettled by the vanity of the run-down city around you. It also helps that Disco Elysium: The Final Cut has updated the voice acting to the NPCs of the game, giving a better feel of the narrative, giving you some time to breathe from the constant reading that you’ll definitely do in your first run. 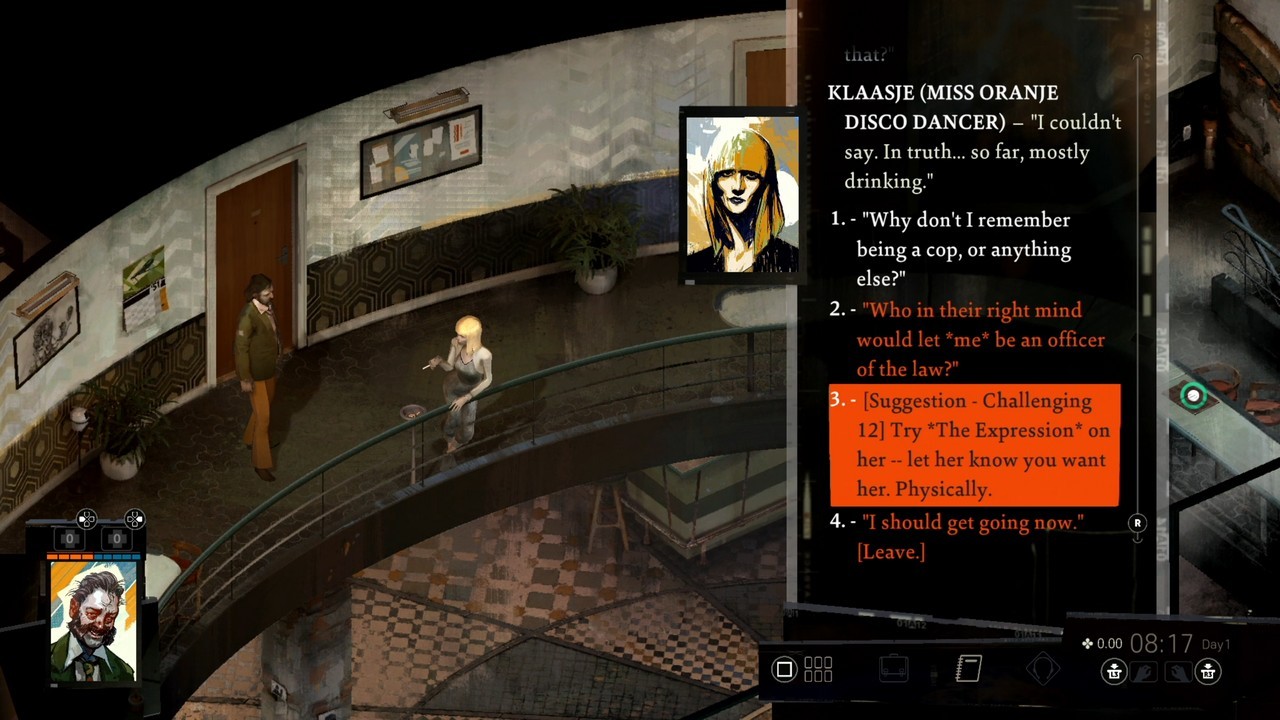 Point and click games that rely heavily on the game’s dialogue are nothing new; the popular example is the Monkey Island series or any Telltale game like The Walking Dead. In this game, you’ll be pointing at anything that will pique your interest, and this is your way to interact with the world. But the gameplay also blends some tabletop RPG aspects like the skill system that is fully based around a dice roll. This dice roll will determine if you can make a successful skill check, and to obtain a successful dice roll, you must be fully familiar with your character’s chosen archetype from the beginning. 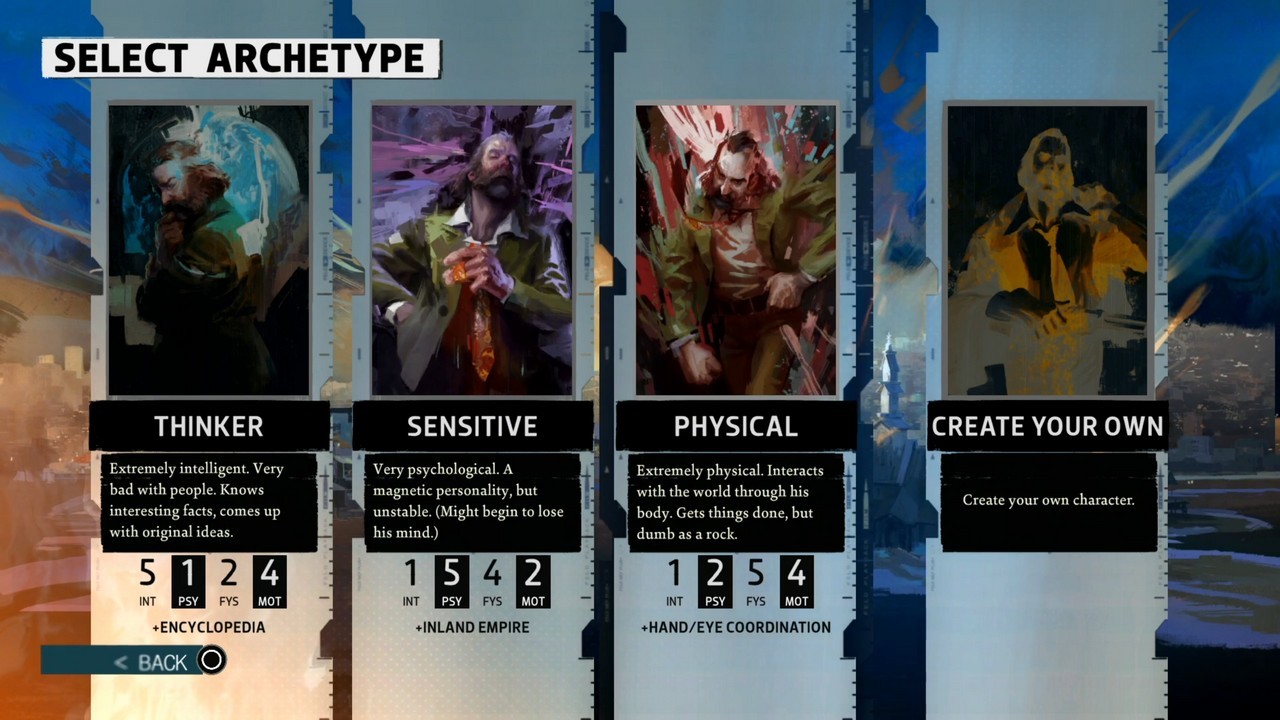 There are four character archetypes to choose from, and your archetype will determine your character’s personality and what traits will he excel at. You can choose from being an analytic Thinker who can come up with good and unique ideas but very bad at interacting with people, or you can muscle your way as a Physical type of detective who prefers to use brute force rather than thinking rationally. There’s also the Sensitive type who can talk his way through people, opening more dialogue and information through conversation but has a very unstable mind. All archetypes have their ups and downs, and depending on the chosen archetype, will also determine your character’s personality, affecting your influence throughout the game. There is also a “create your own” option where it’s up to you to build your stats if you truly want to personalize your character. 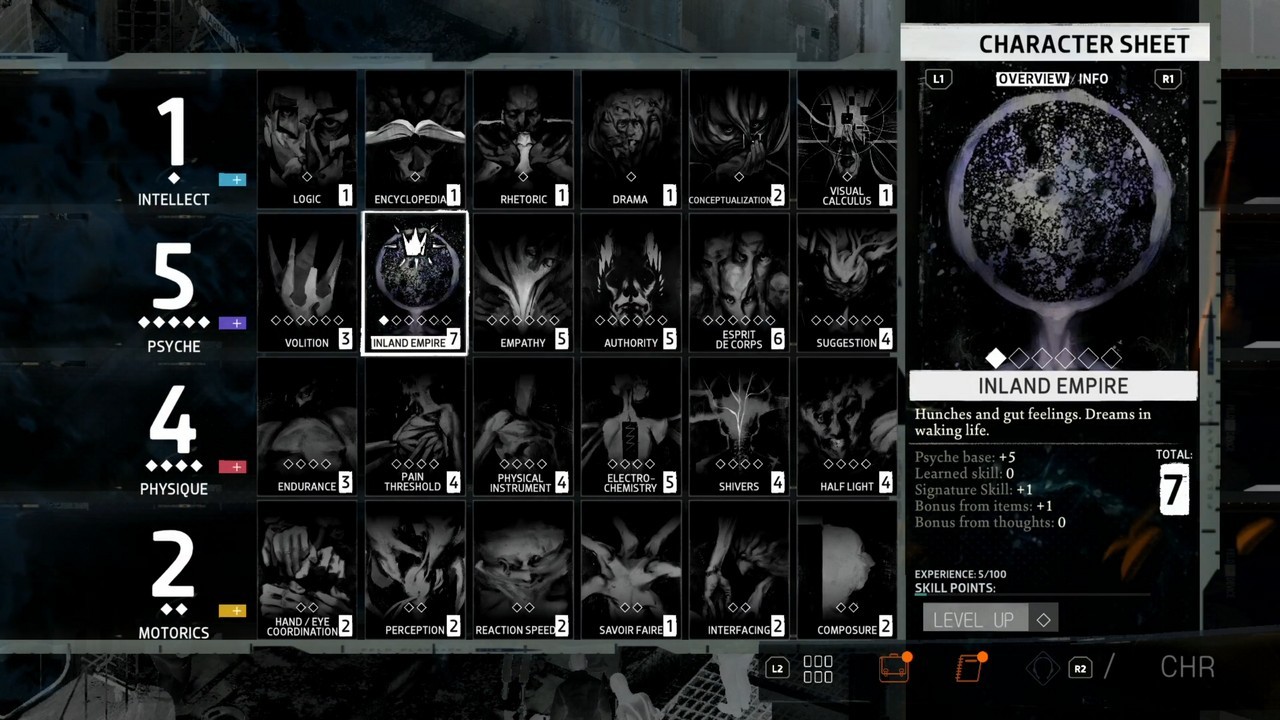 There is no “best” or “correct” archetype from the option given to you since the story plays out based on your decisions, and each has its unique interaction with every situation, making it highly replayability, especially if you’re interested in seeing how the detective will interact as each archetype. A

dding some more complexity to the gameplay is there are also traits, and each trait (Intellect, Psyche, Physique, and Motorics) has its own unique set of trait skills which give your character necessary skills that you will often need in cracking this case. It is also an interesting representation of the mental state and conflicted personality of our detective, especially when these traits argue with each other. 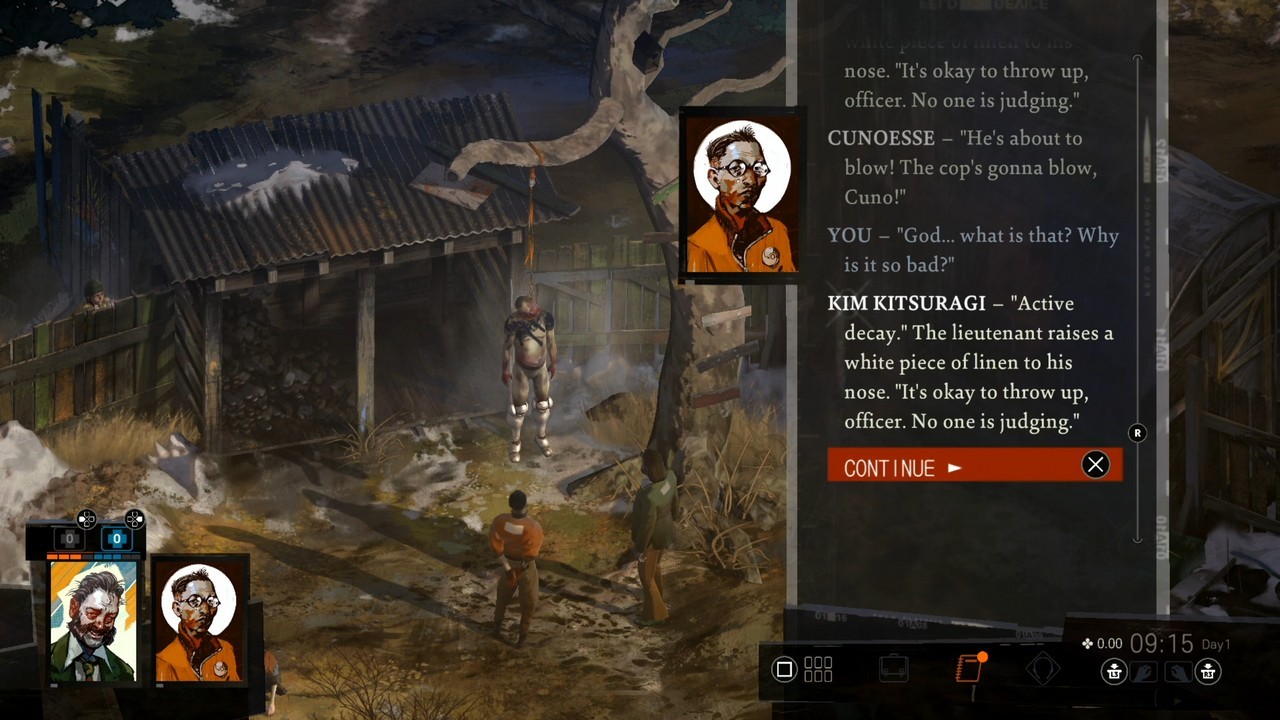 The only thing that I found to be an issue of this is the game’s complexity. The game has so much exploration to do; not only of its world but also pf its character’s psyche, tackling various themes and conflicts that may be too heavy for the general audience to understand.

While the Frame rate of this port (PS4) has a 30 FPS cap, I’m not usually bothered by this kind of detail, but there are just some games that deserve to be played smoothly. Plus, the tabletop RPG style of gameplay takes some time to learn, especially for those who never experienced playing one (and yes, snake and ladders do not count). The navigation controls are a bit awkward so I would prefer playing it in the PC. Not to mention the game is indeed dialogue-heavy — that alone may scare away possible players from even trying out the game in the first place. But if you give it some time and play it with an open mind, you won’t regret playing it.

Voices Inside my Game

Not only does Disco Elysium excel in its visual presentation, but the sound design also deserves praise as the soundtrack syncs well to the current scene and places you visit. But not only that, Disco Elysium – The Final Cut also improves audio presentation by adding fully voiced dialogue for every character. Perhaps my favorite conversation is between the Traits; you really can tell that the voice bothers the Detective as if he’s truly suffering from within. This adds more flair to its storytelling, making it a definitive experience for both first-timers and for those who played it before.

Disco Elysium – The Final Cut’s mix of the tabletop RPG gameplay and a well-written story melds well to its presentation, making you easily absorb its world and characters. But again, its complexity may not appeal to many audiences as they mind find the dialogue too long and too slow or the gameplay too complicated to understand. Although I may sound pretentious, the exploration of the mind and its political and inter-cultural commentary gives it a completely intricate narrative which makes for an unforgettable experience.