Offer your Yubis to the dog god 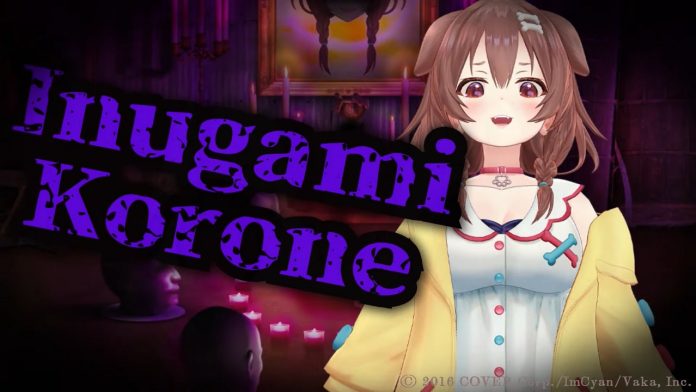 In case you’re unfamiliar, ImCyan is the creator of the Japanese horror game, Tsugunohi. As for this collab, it is part of Korone’s special birthday celebration that took place on October 1st. The Evil God Korone game will become available for the PC via Steam in both Japanese and English language on November 8, 2021.

In Evil God Korone, Korone (who played/streamed too many horror games) turns into an evil goddess and takes over Tsugunohi. She now invades the daily life of a male student, who unfortunately came across a strange sign. After muttering “something” in front of the said sign, his life makes a sudden dark turn.

Much like ImCyan’s Tsugunohi,Evil God Korone will feature the same theme of “everyday life erodes into horror” where you navigate your character toward the left side of the screen. The beginning scenery shows an innocent and mundane everyday life/walk of a person, but as you navigate through the whole game, it turns into something unsettling and horrific. Korone will also premier the game via a live stream on her official channel on October 31, 2021.

An English-translated version of Tsugonohi is currently available via Steam that includes all seven episodes of the game series, along with two new original titles, including a special collaboration with another popular Vtuber titled Tsugunohi Ai’s Silent Cries featuring Kizuna Ai as the main character.

In related news, Inugami Korone along with Hololive Vtubers Shirakami Fubuki and Oozora Subaru will promote Marvel’s Guardians of the Galaxy as a collaboration with Square Enix on the game’s launch date.

- Advertisement -
Previous articleThe Huawei Watch Fit new is now available in the Philippines
Next articleReturnal finally gets a Save Feature and Photo Mode in 2.0 Update