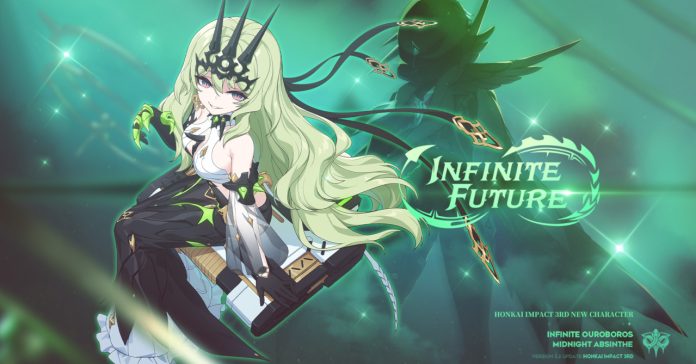 The upcoming chapter in Infnite Future is called [The Birth of Tragedy], and its premise is described as:

“To everyone’s surprise, Overseer Otto is leaving Schicksal and the power and wealth it accumulated over the centuries behind. Is it another ploy, or a price he must pay to realize his lifelong dream? Players will explore the Open World of Schicksal’s former HQ, Kolosten, to uncover the truth. Perhaps they will discover Otto’s secrets and tragic backstory as well.”

As for the new battlesuits, Raven’s [Midnight Absinthe] and Mobius’ [Infinite Ouroboros] will join players in the upcoming update. As the first IMG-type A-rank battlesuit [Midnight Absinthe], Raven will play a slightly different role on the battlefield. The IMG-type is neither superior nor inferior to BIO-, PSY-, MECH-types; instead, it counters other IMG- units and is countered by QUA-type.

Meanwhile, Mobius, the Flame-Chaser possesses the Signet of Infinity, and will debut as the S-rank battlesuit [Infinite Ouroboros]. Mobius’  special mechanic allows her to chain each Special ATK sequence into an enhanced Basic ATK, which should be fairly easy to execute.