Christian and Alex shared interesting details about how they created Arcane. 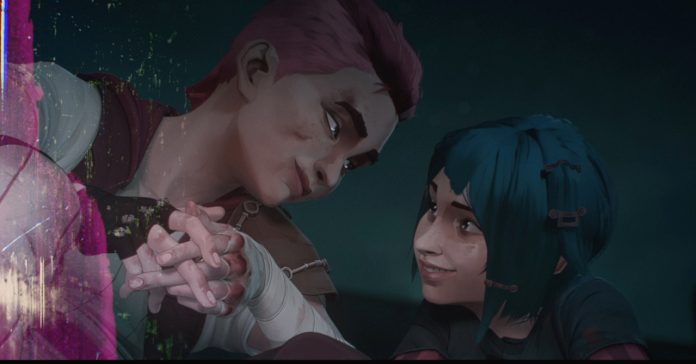 Ahead of the show’s premiere, we got the opportunity to chat with Arcane creators and executive producers, Christian Linke and Alex Lee, and they shared their experience on creating the new League of Legends animated series.

Specifically, Christian and Alex shared how they made Arcane accessible to newcomers, as well as the reason behind choosing Piltover & Zaun as the setting for the series. Plus, the two also shed some light on Arcane’s story and how it fits into the overall League of Legends lore.

The following is the full transcript of the interview:

What surprised me about Arcane is that it’s compelling and fairly easy to follow even if you’re not an existing LoL fan. How did you make it so that Arcane is accessible even for those new to League?

Alex: This is this is something that was a big focus for us from the beginning. It’s hard to answer how we did it, but at the end of the day, the most important thing was just to tell a good story, and we felt like a good story wouldn’t require you to come in with knowledge in advance.

We spent a lot of time trying to strike a balance of setting up characters and trying to find ways to keep that setup engaging and suspenseful, even though for a lot of players, they’re like, ‘I know where they’re going to wind up.’ And I think it was just sort of choosing where we want it to be, in terms of how much information we share.

As for why we decided to [make it accessible]. I think for a lot of us who have played League for a really long time, it’s this game that is very popular, but a lot of our friends and family may have no idea you what the game’s world is. Oftentimes, we may just seem like crazy obsessed to people. So, we really wanted players to be able to open up and share the world that they’ve been spending so much time in with people around them, be proud of it, and have this as a way of having a conversation with people who are on the outside [of the League fandom].

Christian: Vi and and Jinx were champions that me and Alex worked on back in the day when they were being made for the game. As we’re part of the teams that actually worked on those champions, it was just kind of an obvious choice for us. Their relationship was also always really interesting, and so I think there was always a love for them as characters.

As for Piltover & Zaun [as a setting], it’s just really cool to think about the aspect of science, or science as an art if you will. It was just really fun to think about what artists could do with that every single day. So you know, it’s not quite so archetypical in the fantasy genre, and that steampunk influence hasn’t really been explored that much yet. It was just really fun to [imagine] this world of invention and [the likes of] Nikola Tesla, Da Vinci, and all these great inventors, just a whole state is just all about innovation. We as creatives were just really inspired by those things.

I’ve noticed that there were some deviations from the story that’s written on the League Universe site, specifically about Jayce and Viktor’s origins. Is this a retcon of the existing LoL lore or should we treat Arcane as its own thing in terms of canon?

Alex: We really wanted to keep to or to hold that sacred what we consider to be the core truths about the characters. I think Jayce and Viktor are also characters that that that we worked on when they were being created. And it’s a tricky line to walk right because characters are also updated, and their stories are changed and improved. For this show, we wanted to be able to craft a story that felt authentic to everyone and give us an opportunity to have a lot of different characters that you know and some characters that you don’t know, be able to interact and be integrated with each other. And there were places where we felt like we had made some adjustments in order to give you the best story possible.

None of this is really meant to force hands elsewhere in the company. I think Riot as a whole right now has just released some more games, and then Arcane is a new foray for them. So, I think Riot is in this process of figuring out the best way to have all these different teams that are working on different products simultaneously and feel like we’re all giving you the same characters that you love, but everyone still has the agency and the power to build the best product that they can in their different parts of the company.

So, does this mean Arcane is canon? Or is the League of Legends canon a bit more fluid in that regard?

Alex: We’re doing the best that we can to make sure that Arcane is internally consistent and is canon. But at this point, I don’t think we would be considered a source of truth over the game. I do think though this is the first time for us to dive into something like this. So, our goal is really to listen to fans, see how they feel about it, and then and use what we learned to try and continue delivering the best experience we can.

I’ve noticed that the music is very interesting. It’s a bit surprising to hear something like a modern sounding track for that setting. So, what was it like crafting the music for our team?

Christian: We approached the music in a very strategic way if you will. Like Piltover to us was always about being very sophisticated, very mechanical, very rhythmic, really. So, you’ll notice that in the themes for Piltover, [the music] is very orchestral, which is kind of a bit more highbrow, and things feel like they’re clockwork, or they’re a bit like a machine producing sounds.

As for Zaun, we always imagined that Zaun’s a place where people repurpose things in a way that they probably weren’t intended to be used in the beginning. Maybe someone builds drums out of certain canisters, or different kind of wires as strings for the guitar. So, we always tried to find a sound that felt very handmade, and it wasn’t so much about how big it was, but just how handcrafted things can feel. So those are the philosophies, so everything with Zawn was a bit more modern, a bit more based on technology, and Piltover tends to be a bit more old-school with the orchestral sound.

And then of course, we tried to find these special music moments in every episode where there’s a real song that stands in the spotlight per episode.

The first three episodes of Arcane are streaming now on Netflix. Episodes 4-6 and 7-9 will release on November 13 and 20, respectively.

- Advertisement -
Previous articleKatie Leung on what drew her to Caitlyn when voicing her in Arcane
Next articleAsiasoft continues ‘Sharing is Caring,’ donates over 260k USD to 16 organizations in SEA