Here is our first look at Nurgle in Total War: Warhammer 3

Welcome to the land of plague-bearing daemons. 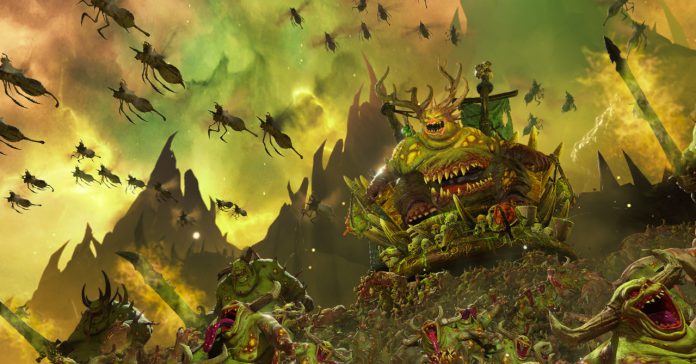 Following the reveal of Tzeentch, SEGA and Creative Assembly have just given us our first look at Nurgle, the Plague Lord in Total War: Warhammer 3.

Check out the reveal trailer for one of the Chaos Gods and his realm here:

In Warhammer 3, The armies of Nurgle are led by Ku’gath Plaguefather, the Rotting Poxmaker. In the game, Ku’gath rides atop a massive palanquin held aloft by countless straining Nurglings,and he is able to launch infected Nurglins into enemy formations. Despite his rotten appearance, Ku’gath can soak up lots of damage, all while being able to inflict grievous wounds to enemies in close combat, or while casting spells from the lore of Nurgle.

Meanwhile, the Nurgle army is composed of units such as Plaguebearers and Nurglings, some of which come with regenerative capabilities, making them excel in melee combat. These units are able to grind down opposing armies with poisonous attacks, and they even have abilities that give greater battle bonuses the more damage they sustain.

In the campaign, Nurgle is able to spread a variety of plagues that debuff enemies, all while giving bonuses to his own armies. Nurgle also uses cyclical buildings that grow and die, and can summon units directly into their armies, but at reduced strength.

Total War: Warhammer 3 will release on February 17, 2022, and the game will be available on day one with Xbox Game Pass for PC.