Lots of fun, but it can be quite dizzying. 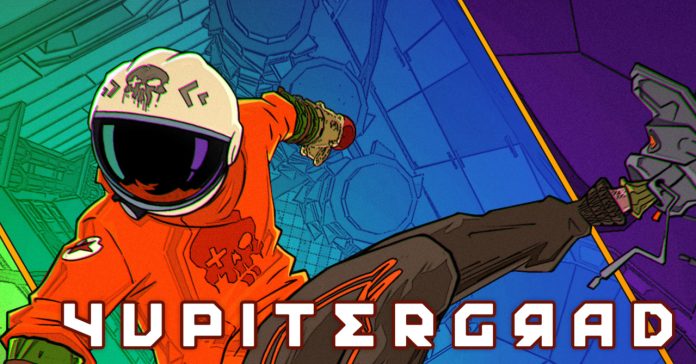 Yupitergrad was recently released for PlayStation VR in Asia by SCRYSoft and Gamedust, and in case you missed its announcement, the game is a virtual reality with a unique premise, along with an interesting game mechanic. In this game, you take on the role of a Russian cosmonaut who must who is assigned to fix a hazardous space station, all while being equipped with a pair of plungers that can be used to swing around. Yes, so you swing around like Spider-Man in this game, if Spider-Man was a cosmonaut that is.

While the premise is interesting, I must admit that I wasn’t exactly looking forward to this game. That’s not because I think it’ll be bad, but because I get dizzy easily when playing VR games. Given that this game has you swinging around to traverse a space station to solve puzzles, I was expecting to get dizzy just a couple of minutes in.

Thankfully, Yupitergrad delivered a fun VR experience that I enjoyed, even if I did get dizzy if I played it for too long. 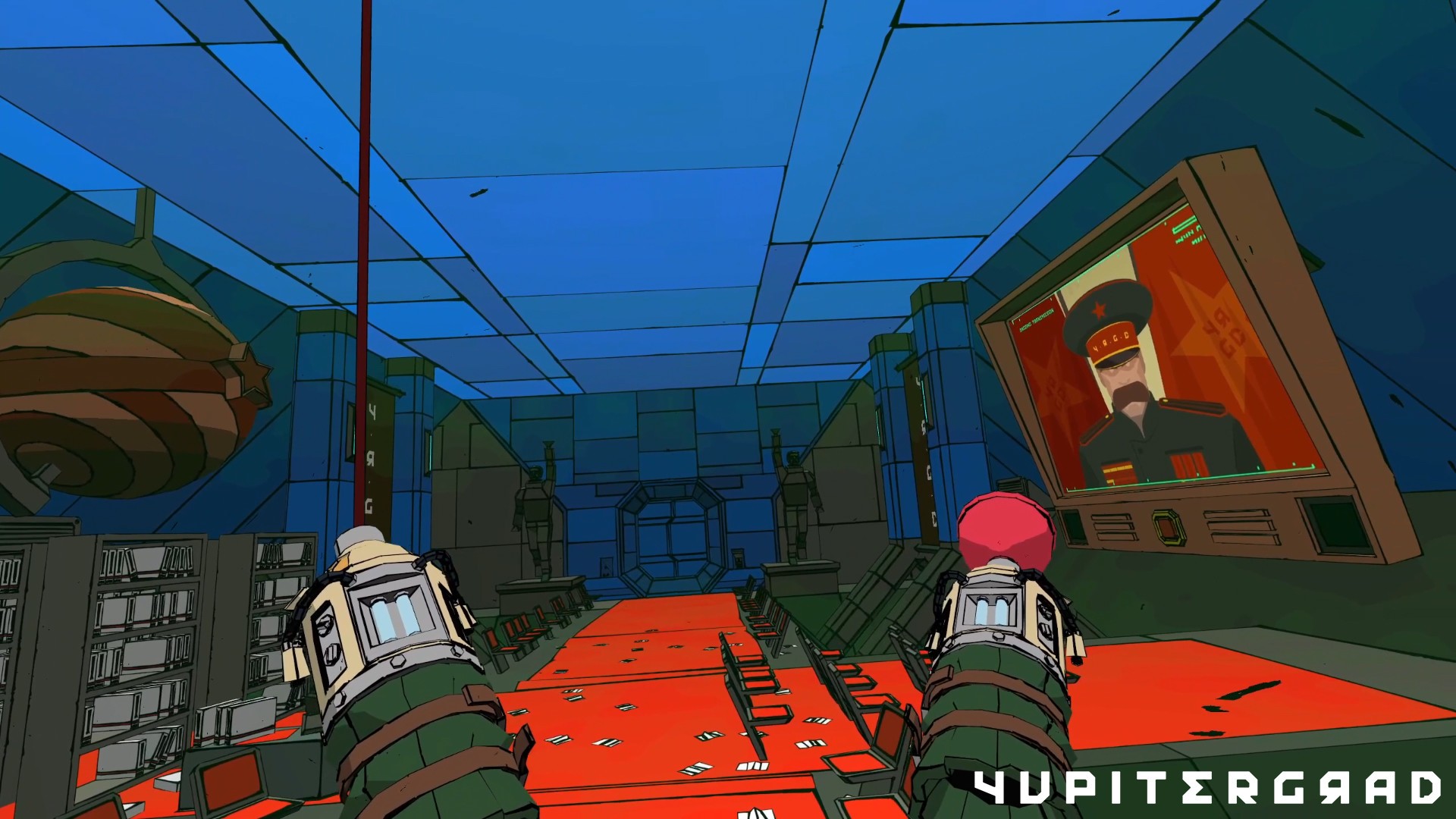 As I mentioned above, Yupitergrad’s gameplay is simple as you simply need a couple of minutes to learn how to swing around using the plungers in your arsenal. Aside from being quick to pick up, Yupitergrad’s movement mechanics feel great, all while feeling quite natural and immersive.

Even if the game is easy to learn, that doesn’t mean Yupitergrad is a cakewalk as there are various challenging levels where you need to coordinate or time your swings properly. Another thing that adds difficulty is that this can be a bit tiring to some, especially if you’re used to games where you just sit and play.

Speaking of difficulty, your mileage on whether you’ll find the game’s environmental puzzles to be easy or not. As I don’t exactly have the sharpest mind when it comes to puzzles, there were times during my playtime where I didn’t know where to go or where I was unsure how to proceed. Though these didn’t happen often enough to make the game too frustrating.

What did give me a tough time are the puzzles that required coordination and precise movement. Again, your mileage may vary, but I did find myself getting frustrated at some points where I had to repeat certain sections multiple times as I kept failing. It didn’t help that I found myself getting dizzy after around half an hour of playing.

Yupitergrad’s gameplay is great and all, but I found it difficult to play the game for a long time. After around 30 minutes or so, I usually found myself feeling a bit dizzy. I can push for a 1-hour playthrough, but half an hour is my sweet spot so that I don’t get too uncomfortable. 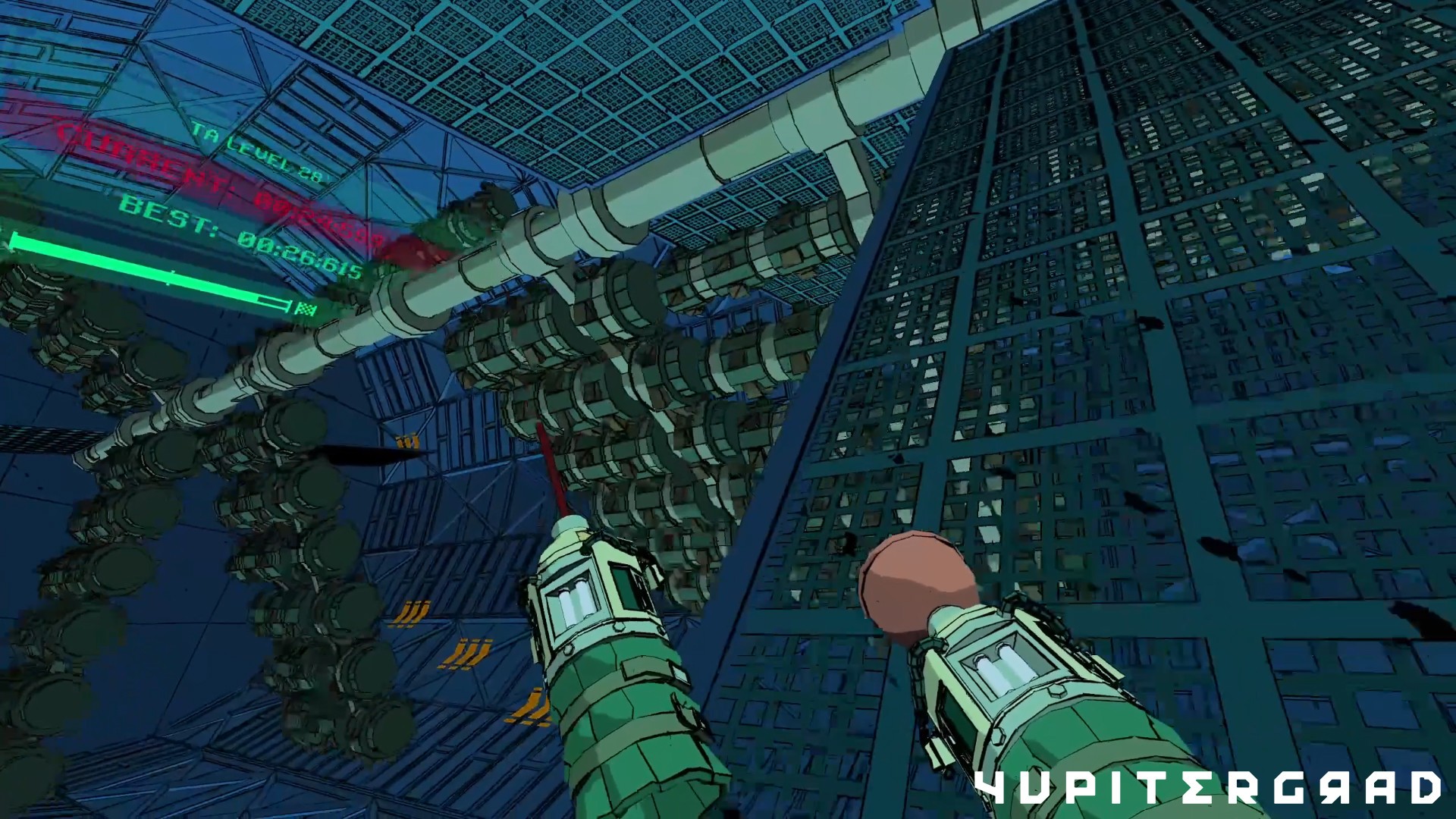 Each player can have a different reaction to VR, but if you easily get nauseated when playing VR, I recommend playing this in short bursts. Playing this way is also recommended as Yupitergrad is quite a short game, with a standard gameplay lasting for only around 2 hours. Though to be fair, Yupitergrad wasn’t as bad as other VR games I tried where I couldn’t even play for 5 minutes. At least with this game, I can have a good time if I pace myself.

Now, even if the game is only around 2 or so hours long, there is some replayability here. Aside from the main missions, Yupitergrad features a time attack mode with leaderboards so you can compete with other players. And if you need to practice before tackling time attack, Yupitergard has a “Gymnasion Mode” where you can practice swinging and other stunts.

A Unique Style and Premise 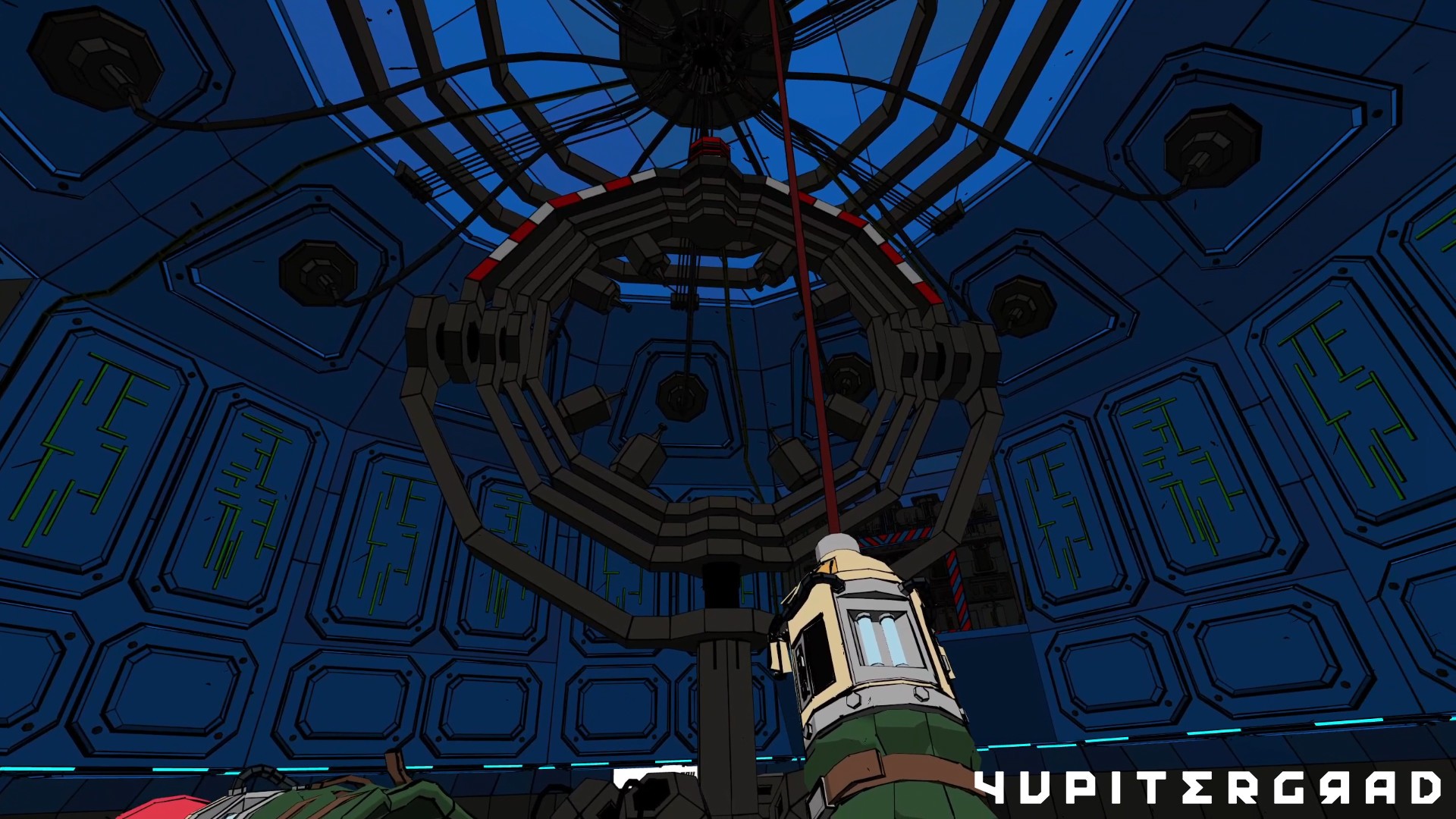 Yupitergrad’s gameplay, while a bit dizzying, is fun, and this is complemented by its premise and overall look.

While I mentioned the game’s premise already, I have yet to mention the game’s humor. While you play this game by yourself, you do get a companion in the form of an AI which comments on your progress and offers suggestions. This AI is not dissimilar to GlaDOS from the Portal games, that is if GlaDOS is a Russian AI with a deadpan delivery of funny zingers.

Aside from having a big helping of Slavic humor, the game also features a eye-catching dieselpunk style. While there are games that use a fairly similar aesthetic, Yupitergrad is still a unique-looking game, especially in the VR space. I found that the stark colors and cell-shaded look to work well for a virtual reality title. Along with the cell-shaded look, the game also features a great soundtrack which enhances the experience.

Yupitergrad is a VR game that is recommended for PSVR owners that are looking for a unique experience thanks to its fun swinging mechanics. Even though it can feel a bit dizzying to some, Yupitergrad is still a fun title to play in short bursts, great as this game’s length is on the short side. While the short length can be an issue for some, the game’s unique look and feel, along with its deadpan humor does make it rather memorable.

This review was made using a game code for PSVR provided by the publisher.