Meet the cast of All of Us Are Dead, Netflix’s Korean zombie horror series

All of Us Are Dead premieres on Netflix this January 28! 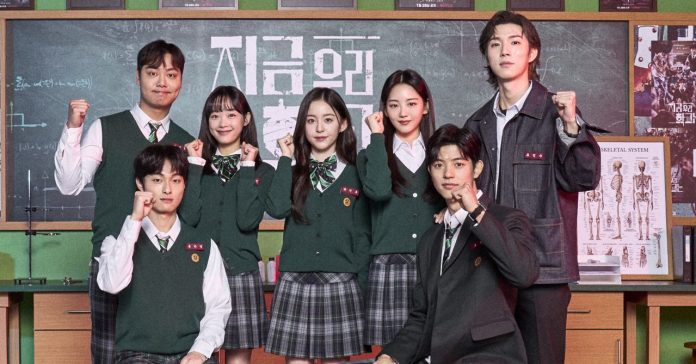 Netflix is bringing us All of Us Are Dead, one of 2022’s heavily anticipated Korean shows, and here is the series’ main cast!

But first, the series is an upcoming a fast-paced, action-packed show that features a cavalcade of characters, a mysterious plot, and your typical high school becoming ground zero for a horrifying zombie apocalypse.

Ahead of its release, the All of Us Are Dead main cast and director gave us a bit more to sink our teeth into when it comes to the show itself and its characters.

Having been based on the popular webtoon Now At Our School, the project has amassed a certain following. Director Lee JQ tells us his rationale for taking on a project of this magnitude given the hype surrounding it.

“There is a lot of zombie content, and in most stories, we look at what happens to adults when they contract a zombie virus. But this was a little bit unique, in that first, it happens in a very confined space that is a school. It happens to students who are not yet mature adults. We often say things like “some adults are childish”, but I wanted to look into what kind of choices–I felt that it would be interesting and intriguing to look at the choices that these young adults make. I felt like it could bring a new kind of meaning to the zombie genre.”

In turn, the cast gave us a very nice class introduction.

“I play the role of Nam On-jo. She is a junior, she is very popular for her upbeat, down-to-earth personality. Her father is a firefighter, so she has these survival skills that her father has taught her. These come in handy in times of crisis, and also, she is very smart.”

“Cheong-san has been best friends with On-jo since they were babies, and he keeps his long-time love for On-jo under wraps. He is very just. He’s very fast at discernment, so he’s really good at escaping from zombies. His parents run a fried chicken place…but he doesn’t really like that.”

“I’m like, at the top of the class–the class president. My name is Nam-ra in the series. She gradually breaks down her walls while joining forces with her friends to survive.”

There was a bit of a kerfuffle where Yi-hyun seemingly describes someone else as her character, but she caught herself midway. Could this all be a clever ruse? Are we being played?! We’ll find out soon enough.

“I play the role of Su-hyeok. He wants to be in the army later on. He wants to be a soldier, so he uses all his might to protect his friends during the zombie outbreak. He goes all out and he takes on dangerous tasks. So, he’s kind of like a leader.”

“I play the role of Yoon Gwi-nam, and he is a notorious bully. Among his crew of friends, he always ranks second, so he has a hang-up about that. He does whatever is necessary to survive, and he becomes a bigger threat to the survivors rather than zombies.

“I play the role of Na-yeon. She is a wealthy girl and all the issues, all the conflict that happen in the series are spurred by her, basically. So, I hope she’s charming, though.”

As usual, host Park Kyung-rim did a great job in making the interview fun and engaging for everyone. While we were able to see a brighter, more laid-back side of the cast, we’re looking forward to witnessing their brutal fight for survival in a place they once considered their second home.

All of Us Are Dead releases on January 28, 2022 exclusively on Netflix.