Now this is true next-gen gaming. 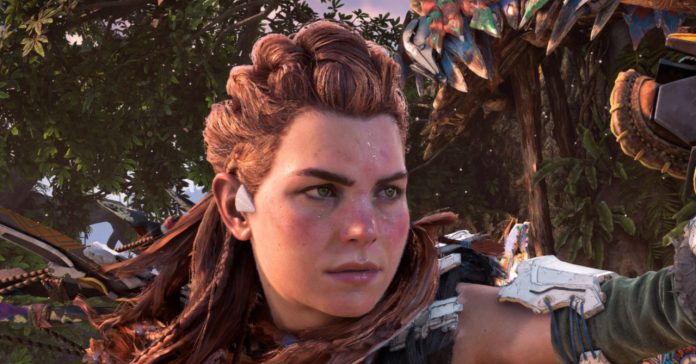 Much has been said about Aloy having visible peach fuzz thanks to the enhanced character models on PS5, but after playing Horizon Forbidden West, what stood out to me about Aloy’s model in-game is how noticeably sweaty she gets. At least based on the PS5 version of the game.

While her sweat levels aren’t to the level of the new NBA 2K games, you are able to clearly see sweat droplets on Aloy’s face when in hot environments such as deserts.

Here’s an example, though you may need to zoom in a bit on her forehead and around her eyes to see if you’re on a smaller screen: 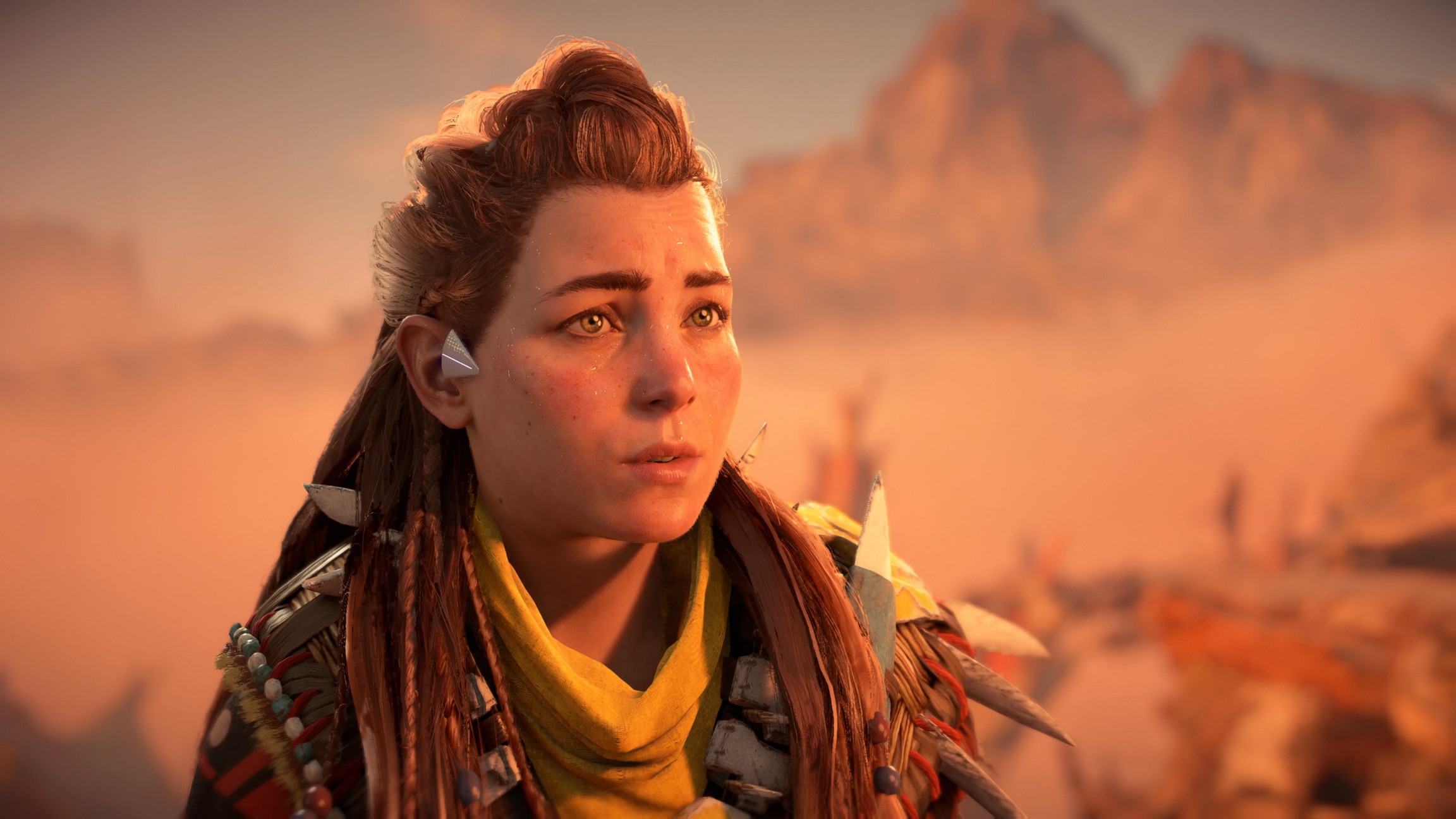 Sweat forming on Aloy’s face is noticeable in cutscenes, though you can also see this clearly in her in-game character model. Combined with the fact that she sometimes wipes off her brow and remarks on how hot it is, this does enhance the sense of place that you get while playing. 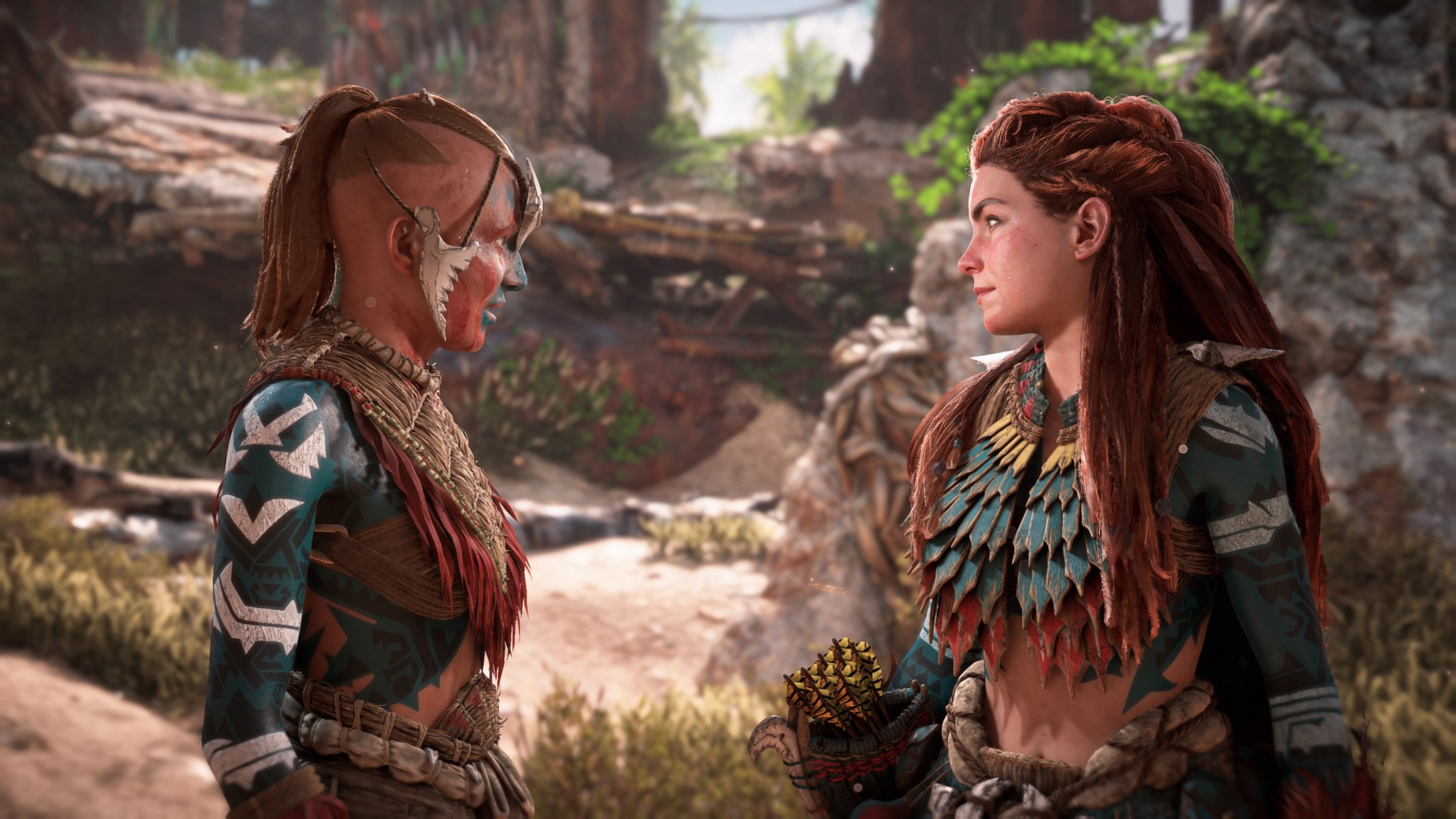 Getting sweaty isn’t limited to Aloy’s character model though. The rest of the game’s characters also exhibit a similar level of detail. You can clearly see this in the image above as the Tenakth tribe member that Aloy is talking to is absolutely drenched in sweat (at least in her face). This makes sense given that a tough battle against a group of enemies happened before this cutscene.

Though after zooming in to Aloy one too many times with Photo Mode in my quest to observe the game’s sweat tech, I did notice that sweat only noticeably pops up in and around her face.

But things are different when you take a dip in the water, which you would do so given that Forbidden West features an expanded swimming feature.

Here are some screenshots of Aloy fresh after taking a dive: 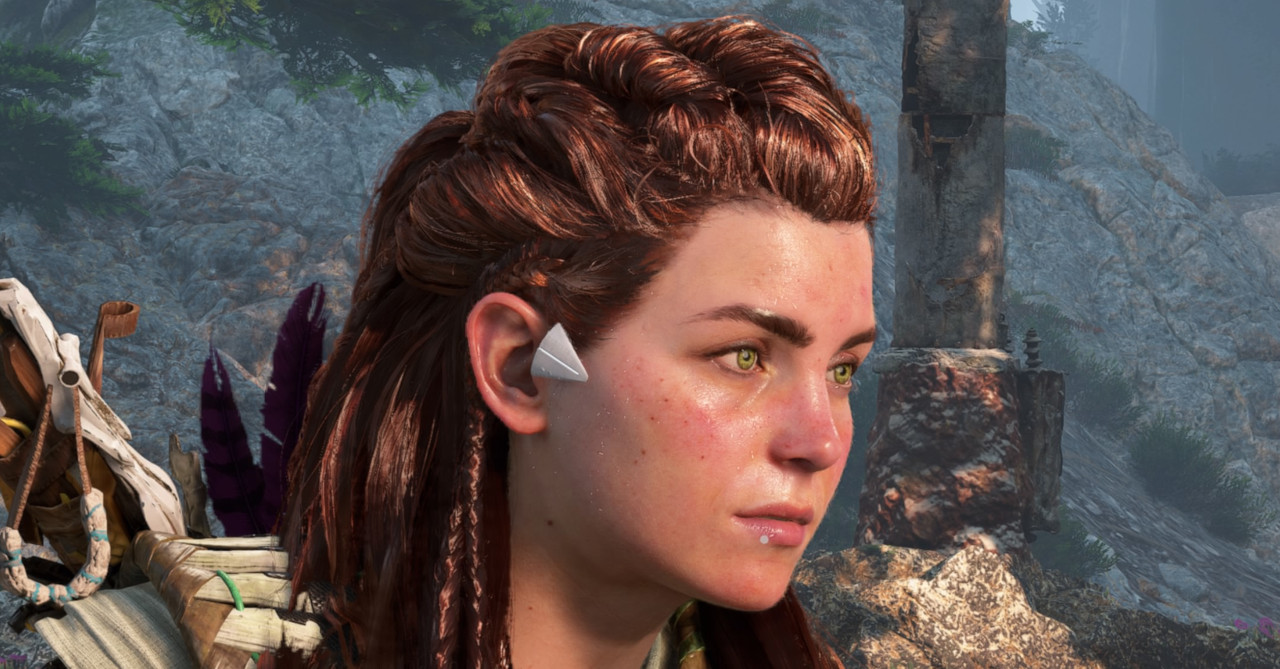 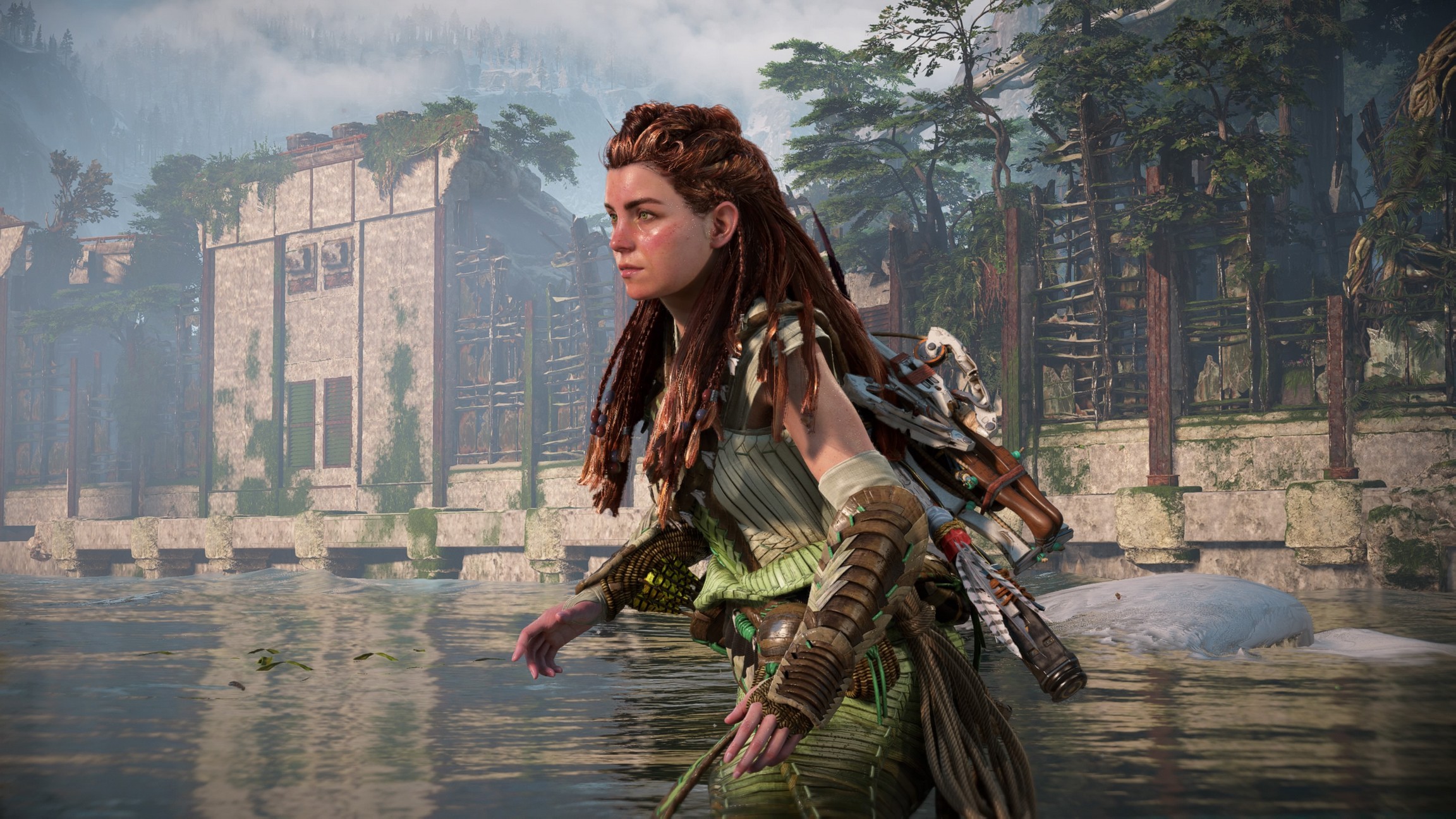 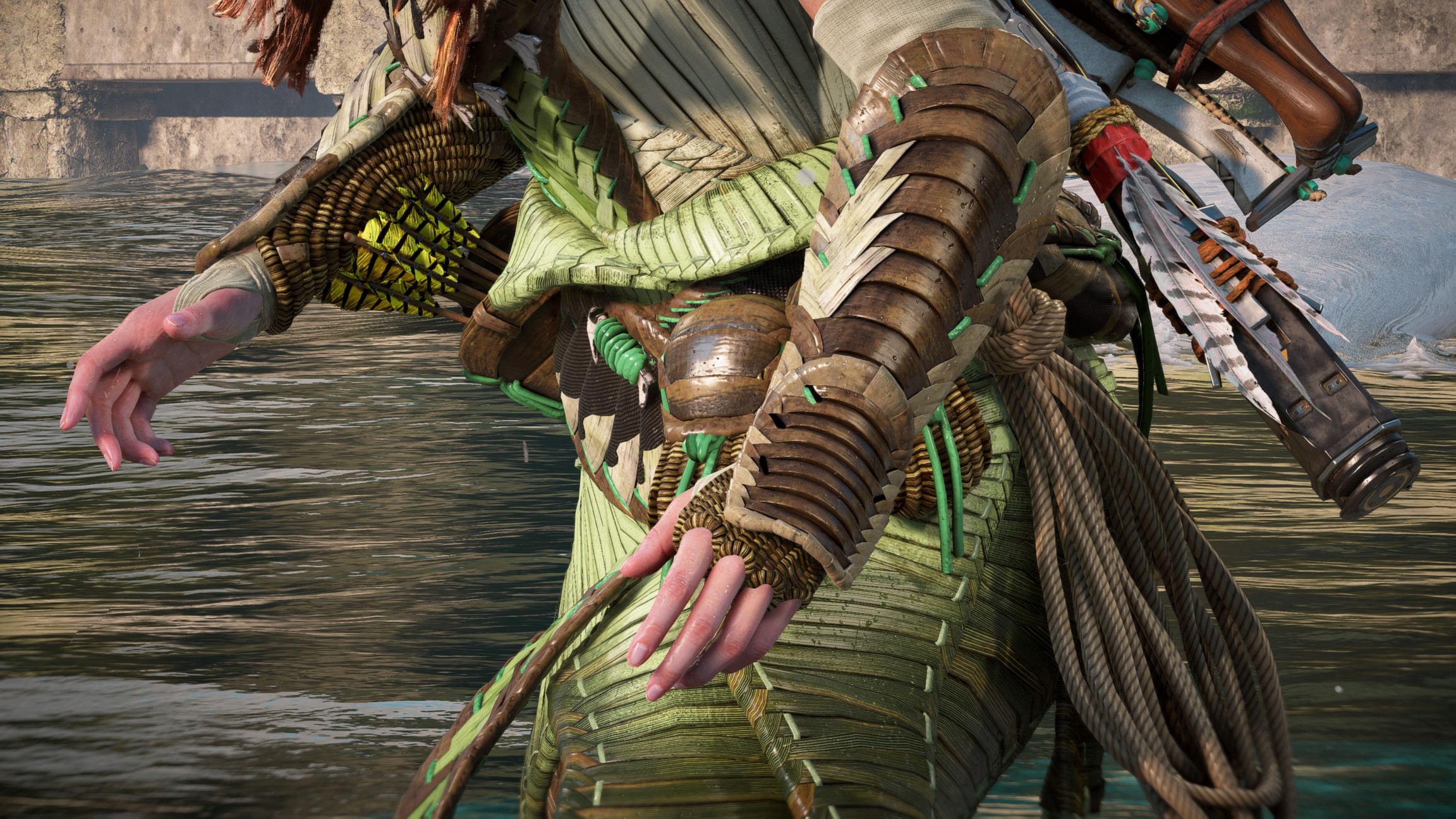 As you can see, Aloy’s face appears noticeably wet after taking a dip. You’ll also see that her arms and her outfit have noticeable water droplets on them.

Aside from water, Aloy also gets covered in sand if you slide or roll through a beach. For reference, here’s a look at Aloy’s clean armor: 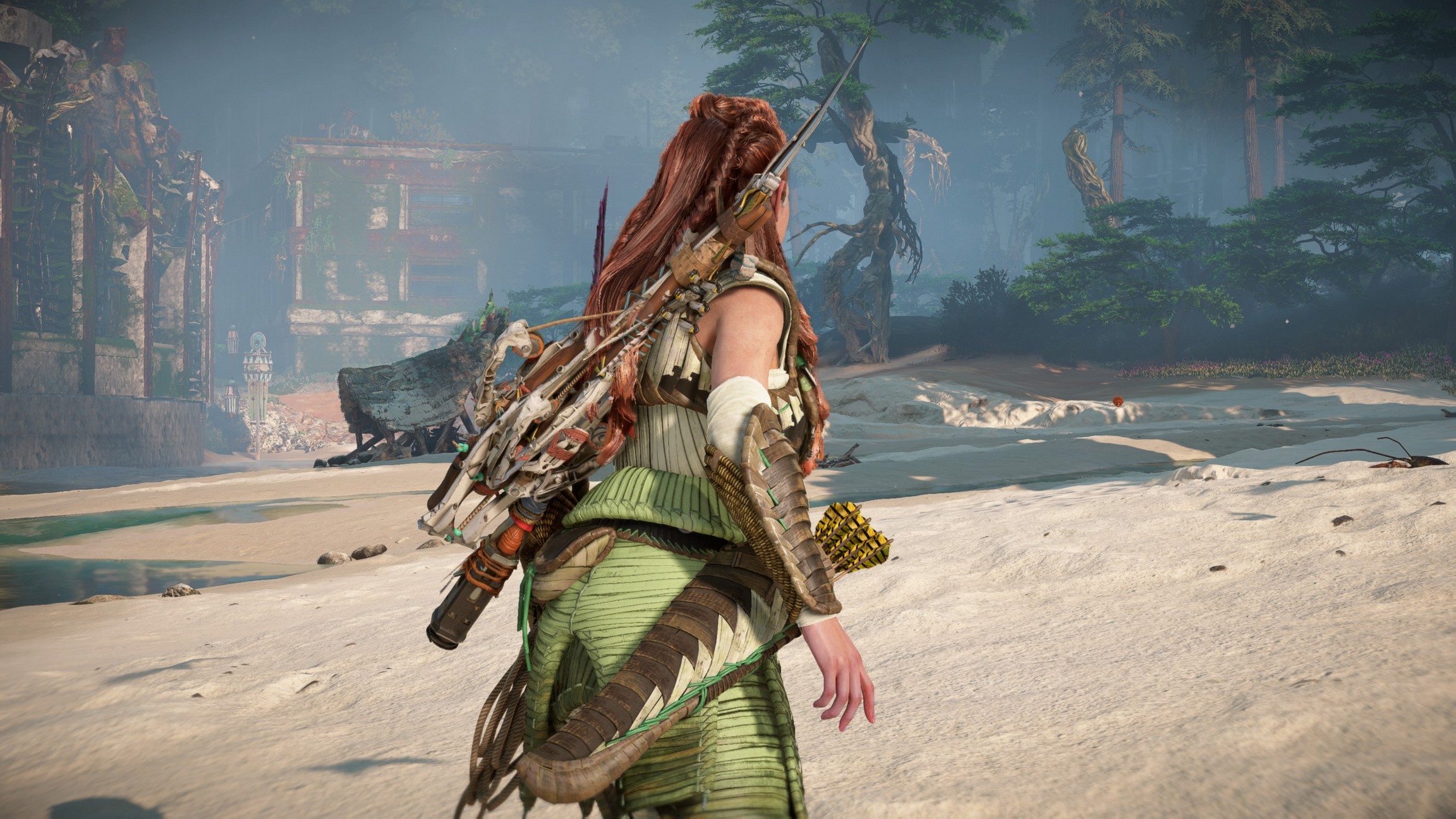 Now, here’s what happens when you roll through the sand: 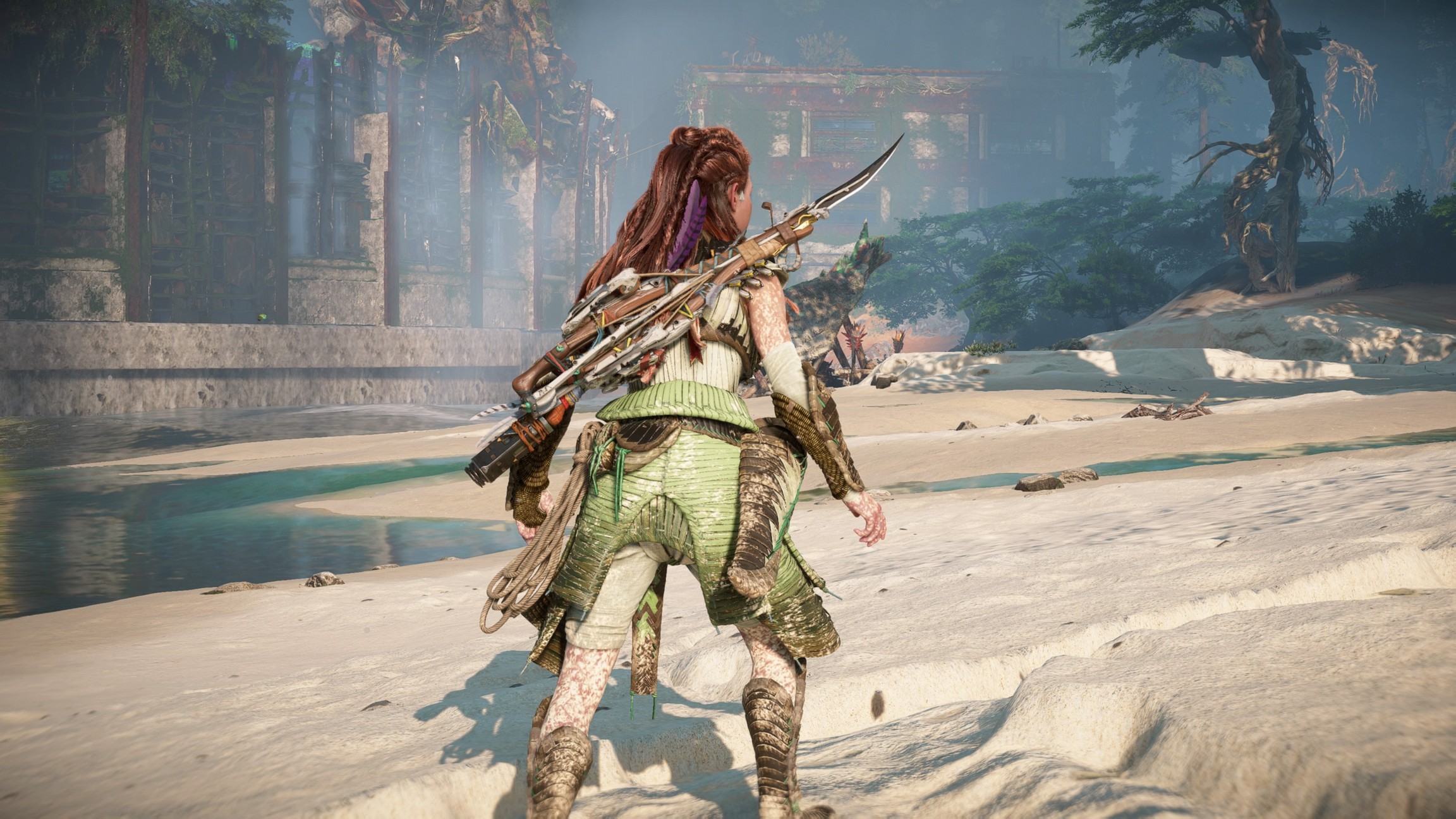 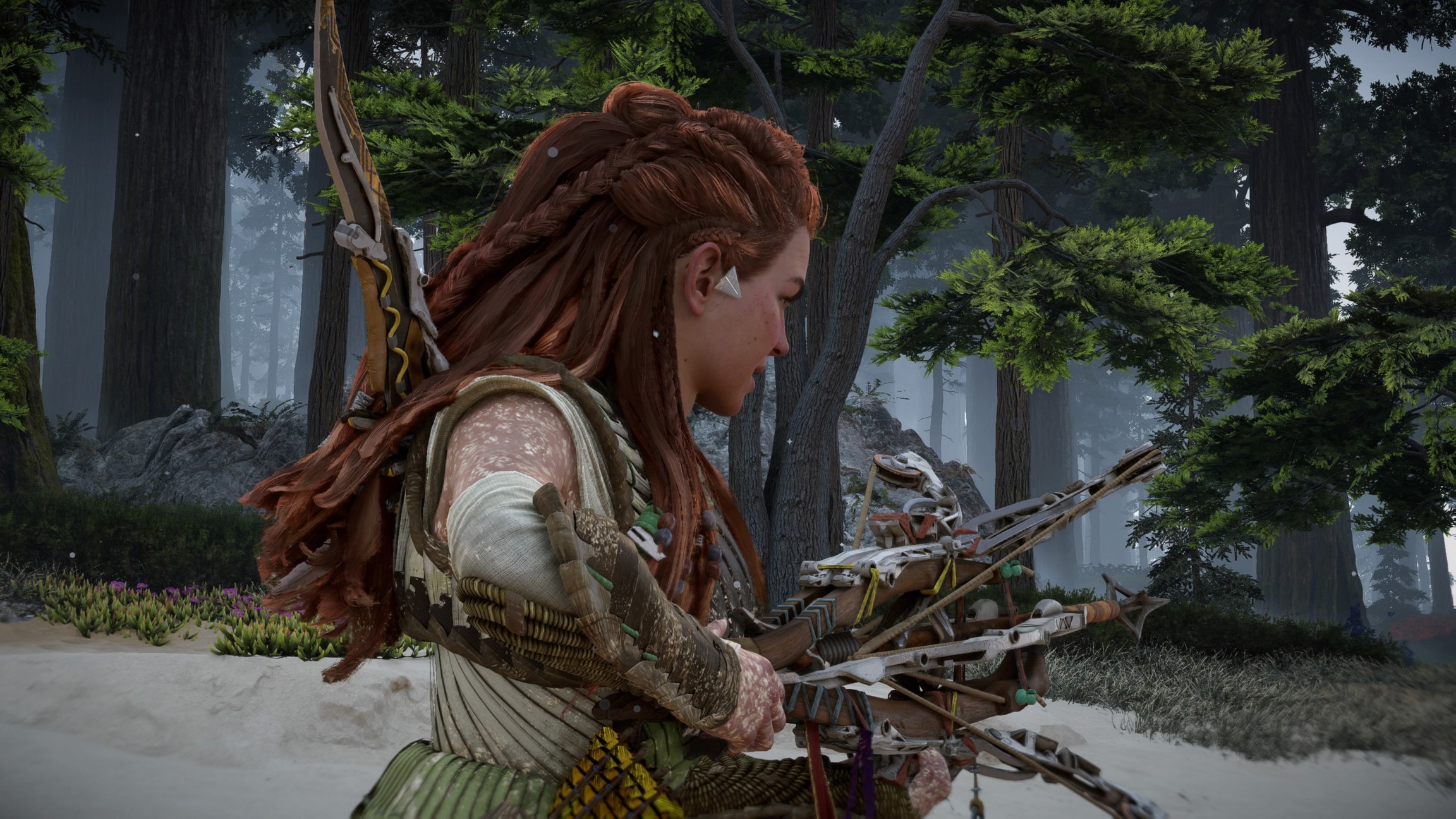 As you can see, Aloy gets covered in white sand, with even her arms and legs getting some sand in them.

Moving on to the desert, Aloy also gets sand on her outfit, but the color is a bit different as the desert sand does have a different hue: 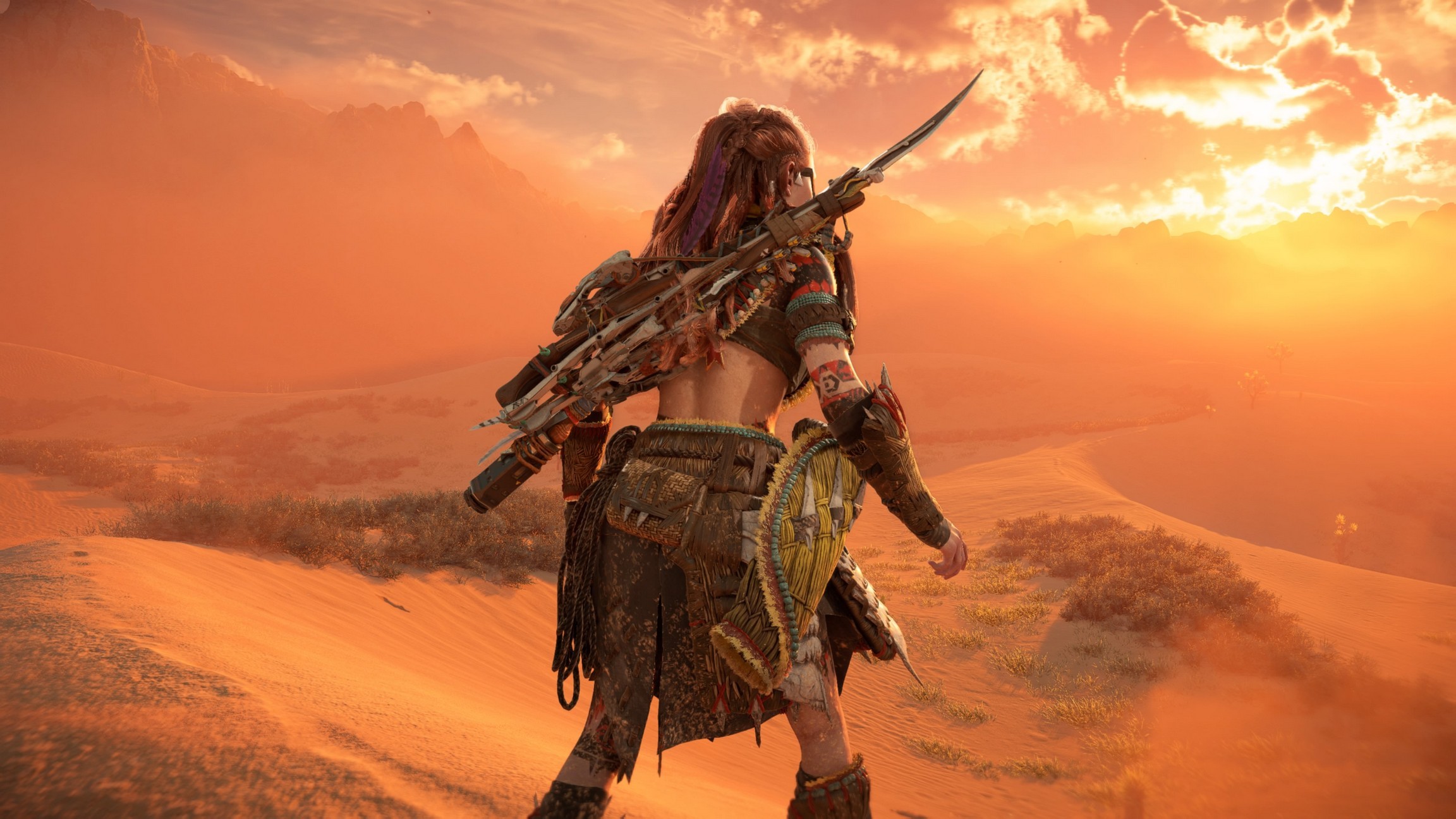 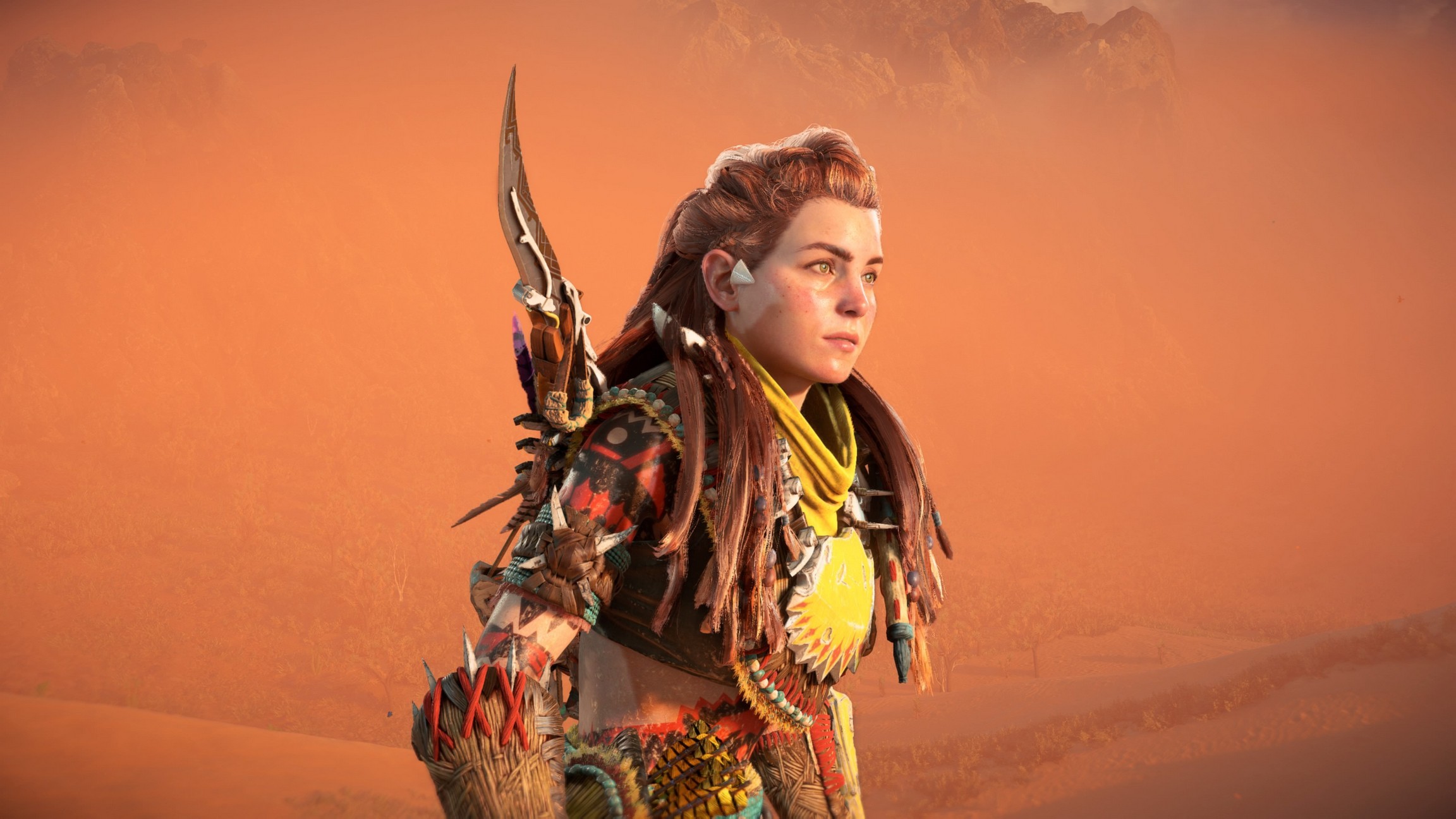 Finally, Aloy gets absolutely covered in snow when you slide across snowy environments. This isn’t new given that Zero Dawn is also like this, but the effect in Forbidden West seems a bit more pronounced (at least in my eyes). 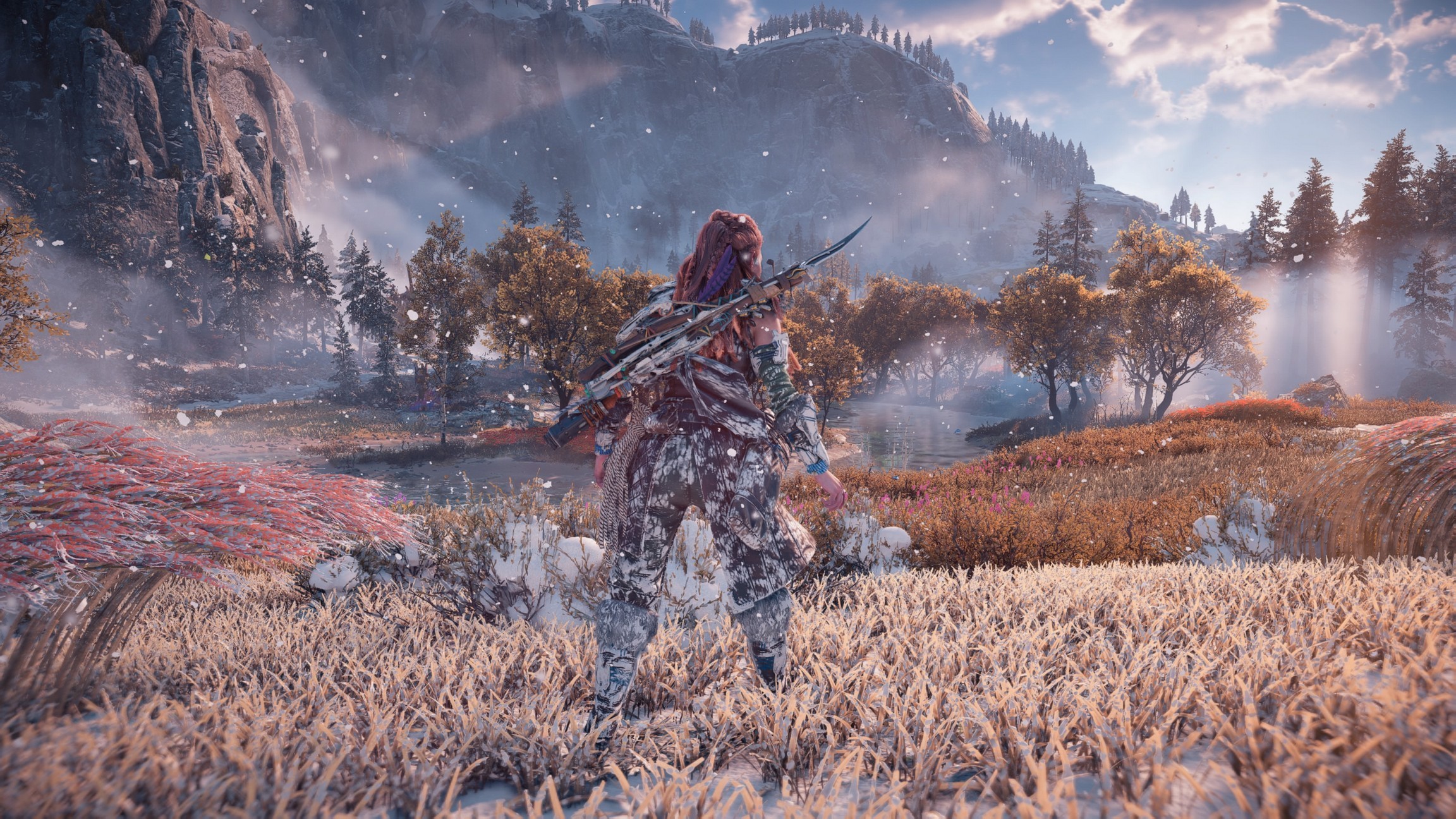 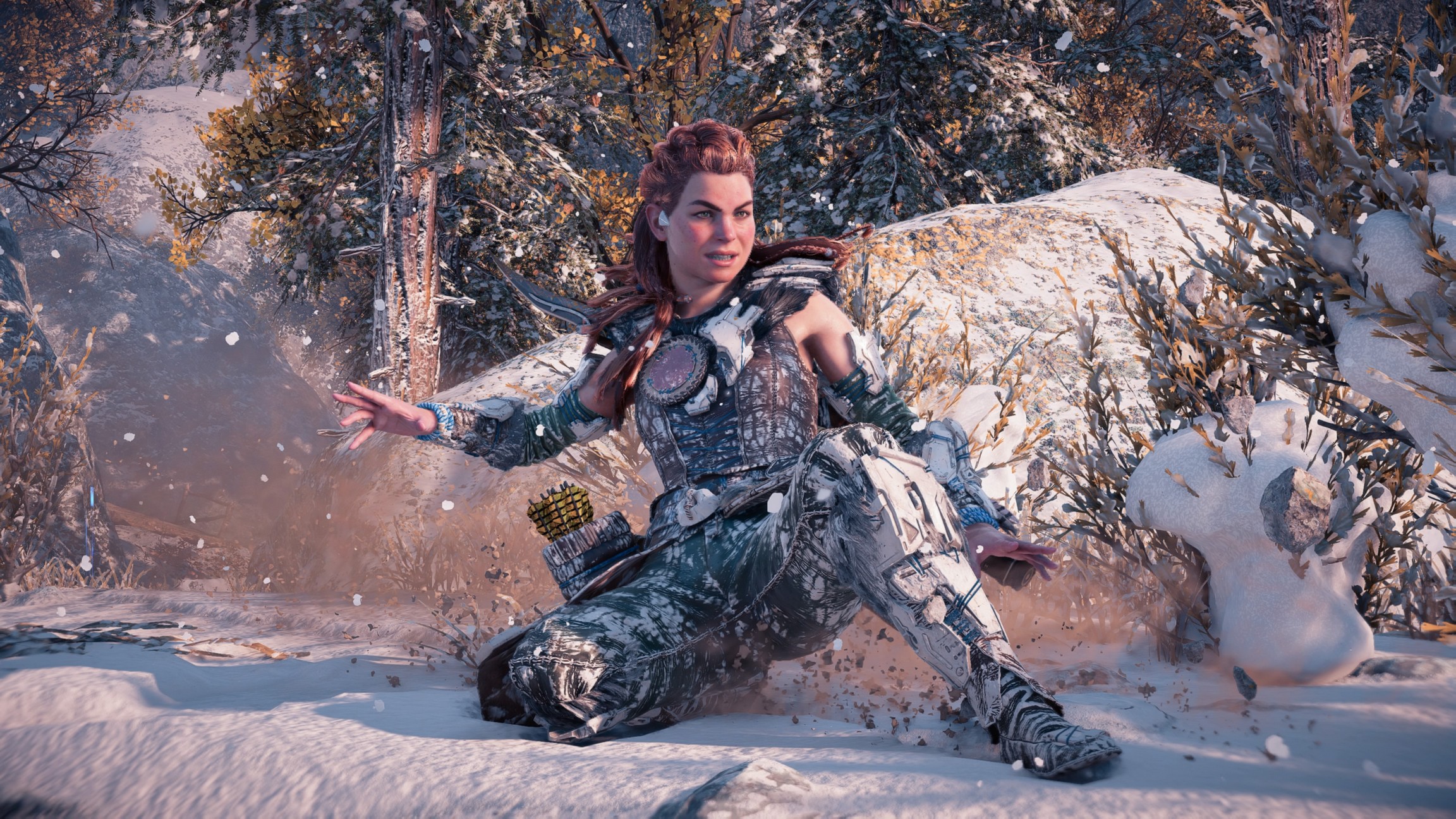 These character model effects don’t exactly add anything gameplay-wise, but they were cool to see. What surprised me even more is how I was able to clearly see them, even though I was playing the game on a small 1080p TV; great news for me and other old TV owners as you won’t need a brand-new 4K TV/monitor to appreciate the enhanced character models and effects in this game.

The effects, along with the high quality character models and improved animation help make Horizon Forbidden West look more like a next-gen title instead of just an upscaled PS4 game.

For more on Horizon Forbidden West, check out our review of the game here.