ASUS Vivobook 13 Slate OLED Impressions | Should you get this 2-in-1? 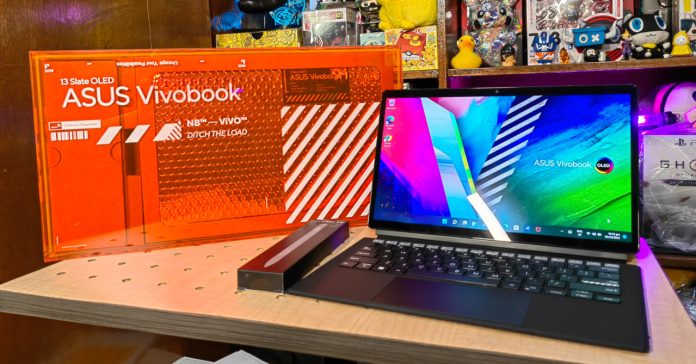 Following its global reveal back in November, ASUS is finally bringing the new Vivobook 13 Slate OLED to the Philippines. In case you missed its announcement, the Vivobook 13 Slate is a new 2-in-1 from ASUS that combines the portable form factor of a tablet with the utility of a laptop with a dedicated keyboard and trackpad.

While this is not the first laptop to have such a form factor, it is one of the few to pack an OLED display. 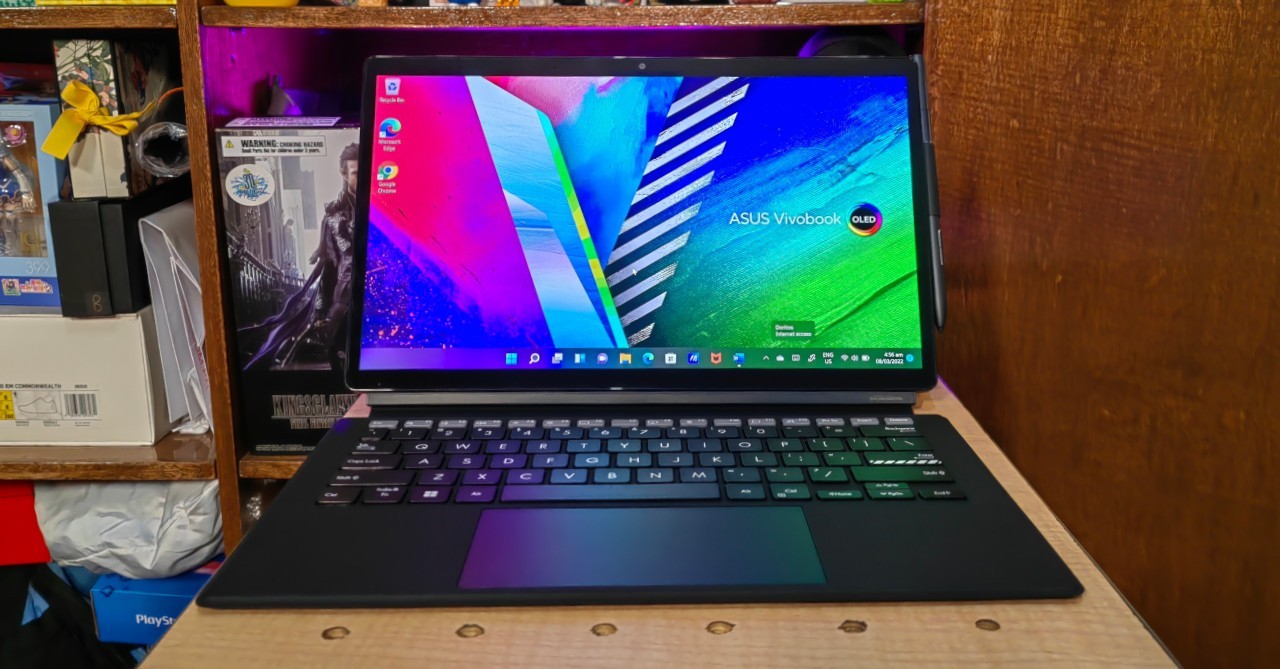 Specifically, the Vivobook 13 Slate has a 13.3″ FHD OLED (1920×1080) touch display with 550 nits peak brightness, 100% DCI-P3 color gamut, and Dolby Vision. The display is great on paper, and in our first impressions, it indeed impressed with its vibrant colors and high level of brightness. 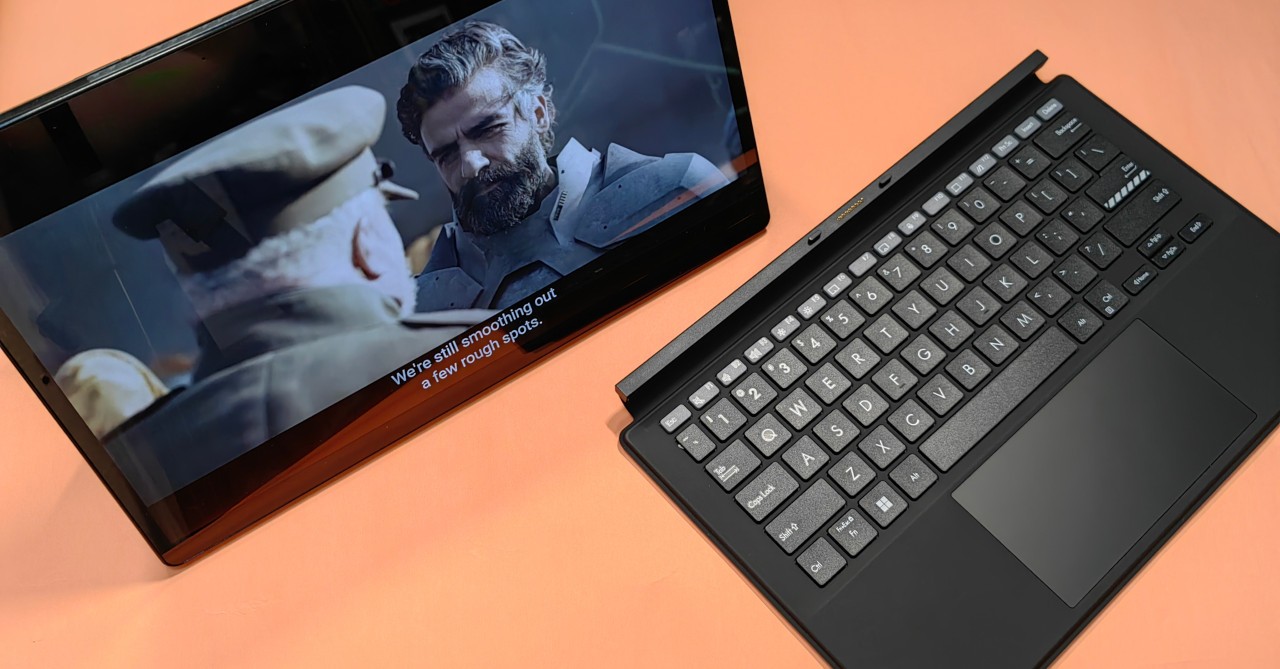 In ASUS’ launch event for the Slate, they called it your own personal OLED TV. While it’s not the biggest display out there, you won’t be disappointed in terms of quality, especially for binge-watching movies and shows. Thanks to its detachable form factor, you can easily position the screen for an optimal viewing experience. Given this, the binge-watching experience on the Slate is a step above laptops of this size.

Aside from having a nice screen for watching movies and shows, the Slate also features Dolby Atmos quad speakers that enhance the binge-watching experience. The device’s onboard speakers can get quite loud, and they have good quality to boot. In fact, the Vivobook 13 Slate has better onboard speaker quality compared to typical laptops. 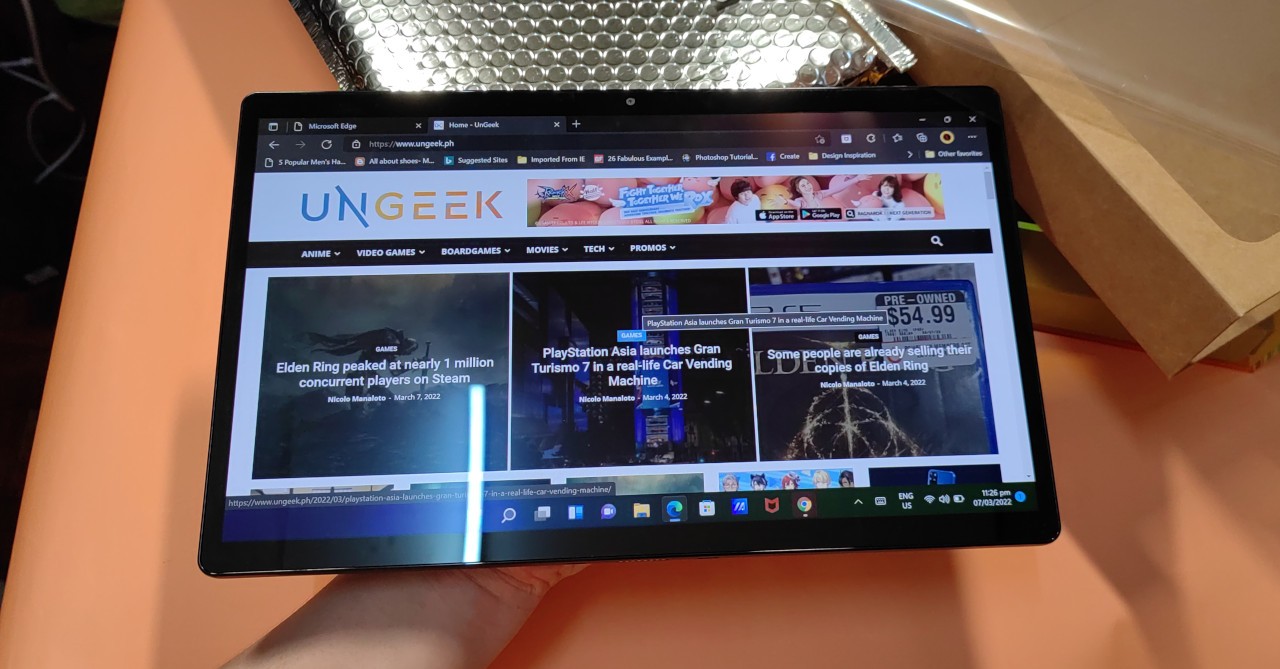 Speaking of form factor, the Vivobook 13 Slate can be used like a laptop or like an external display as it has a built-in stand. Though you can also use it like a 13-inch tablet; this is handy for some users who may want to run mobile-style apps. You can even run some actual mobile apps on this as you would an Android tablet as the Slate runs on Windows 11. This is because Windows 11 natively supports Android apps, though you may have to sideload your favorite apps so you can get them to work. 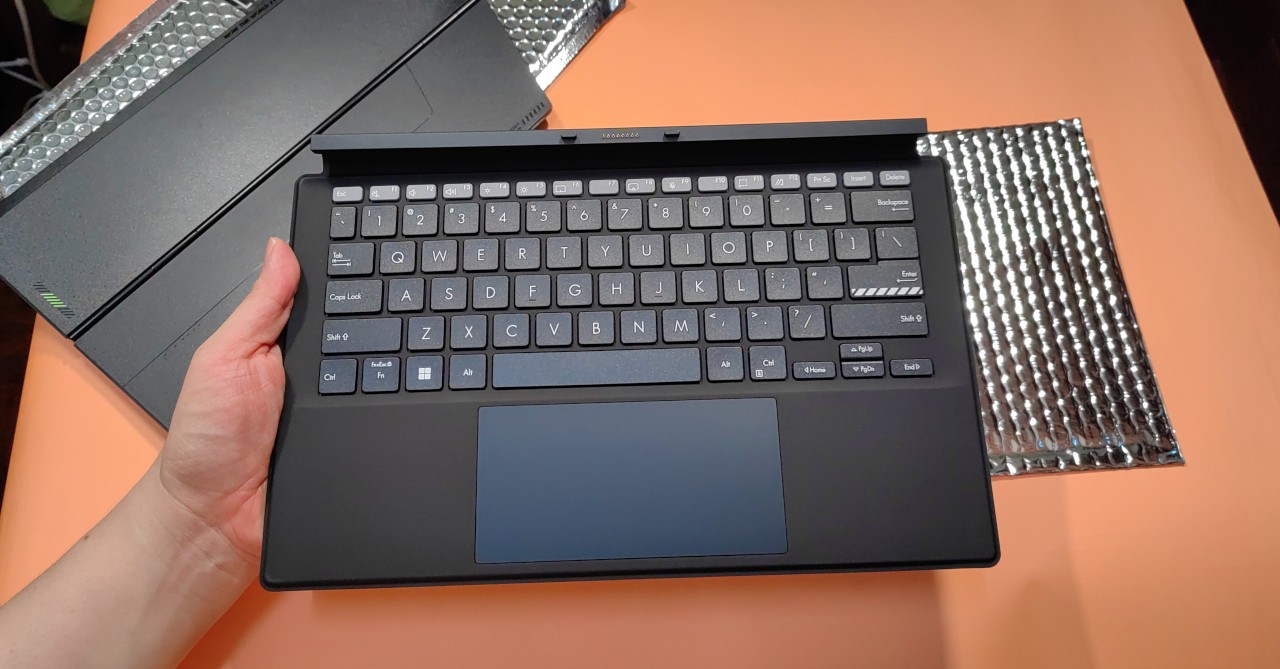 To use the Slate like a more standard laptop, the device comes with a keyboard attachment with a fairly large trackpad. This is a great feature to have, especially as you won’t have to be stuck with using the touch controls.

Aside from the keyboard attachment, the Slate also comes with the ASUS Pen 2.0 stylus. With 4096-level pressure sensitivity, this should be a welcome inclusion for creatives who like drawing while on-the-go.

Aside from the included accessories, the Slate 13 also comes with a wealth of features. These include a fingerprint scanner on the power button, two cameras (one 5MP at the front and one 13MP at the rear) for both photography and for Zoom calls, AI noise cancelation for clear audio during online conferences, and USB-C easy charge so you can charge the Slate with a power bank.

For I/O, the Vivobook 14 Slate packs two USB Type-C ports, a 3.5mm combo jack, and a microSD card reader. While I would’ve liked to see a USB Type-A and HDMI port, the lack of these ports makes sense given the slim, tablet-like form factor of the Slate. But at least the laptop packs a microSD card reader as it is always a plus for professionals/content creators. 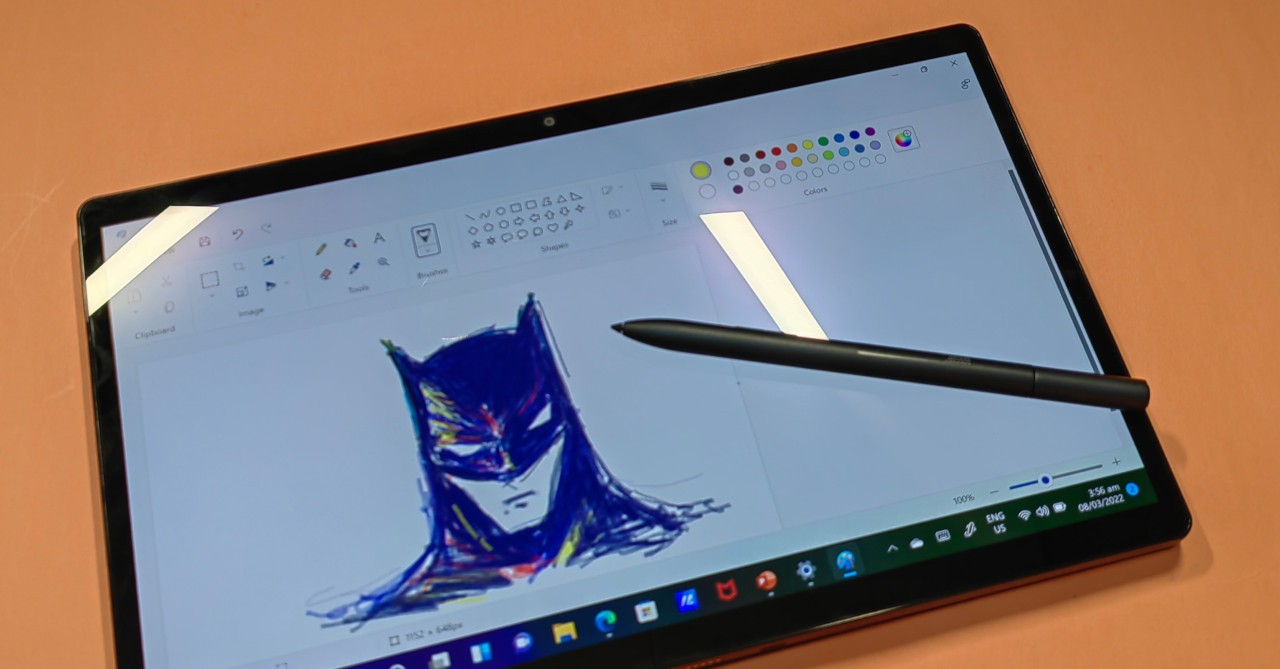 For the most part, the Vivobook 13 Slate OLED is a great device, though its processor is not the most powerful compared to other Vivobooks. Specifically, the Slate is powered by an Intel Pentium Silver N6000 Processor. While this processor is capable of running your favorite web browser, Microsoft Office apps, and some light photoshop, don’t expect this to run more hardware intensive apps such as Premiere Pro.

To complement the processor, the Slate has 8GB of RAM and 128GB of internal storage. While this is enough for casual use and for office productivity, content creation isn’t the forte of this device. 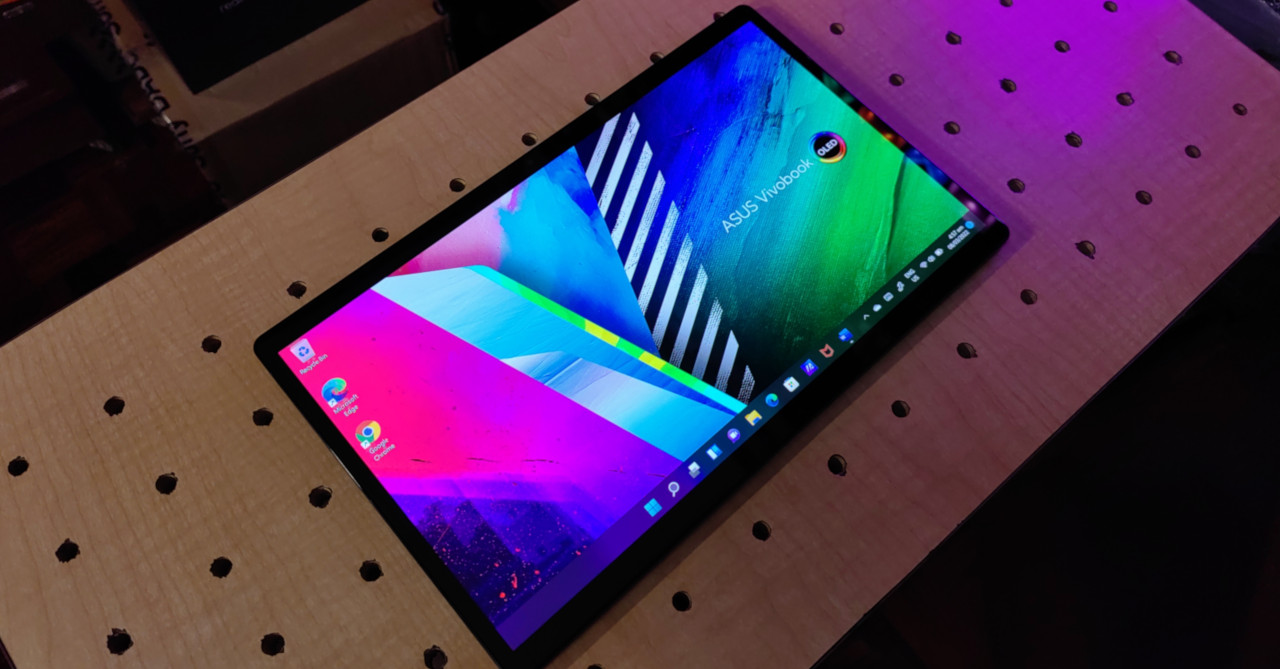 Priced at PHP 44,995 (8GB/128GB Variant), the Vivobook 13 Slate OLED is an interesting 2-in-1 device from ASUS. Based on our impressions, it is a nice tablet-laptop hybrid that’s worth considering for users who want a premium tablet with the versatility of a Windows-powered device. While it may not be up to snuff for content creation, users who need a device mainly for office work, browsing, and movie/series watching should be served well by the Slate.