The big addition for realme. 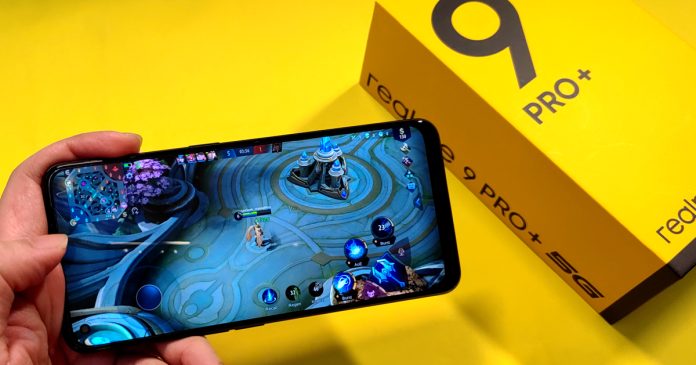 realme just unveiled a couple of new devices continuing their main numbered line series – the realme 9 Pro 5G and the realme 9 Pro+ 5G. While there are similarities between the two, particularly on the design front, the differences seem to make a huge plus with the slightly more expensive variant of the two, the realme 9 Pro+.

Do these upgrades warrant the SRP attached to the realme 9 Pro+ 5G at Php 23,990? We’re going to try and answer that with this review. 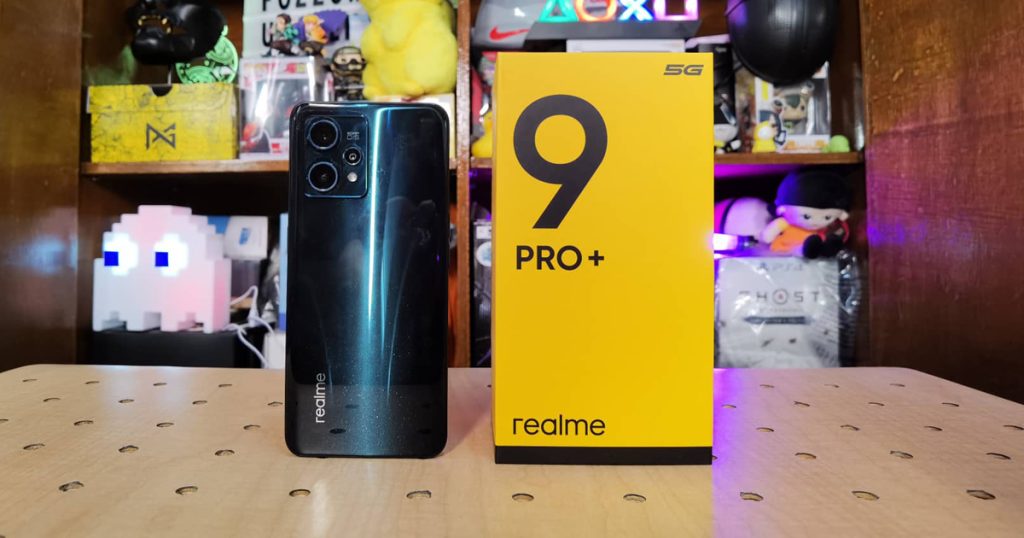 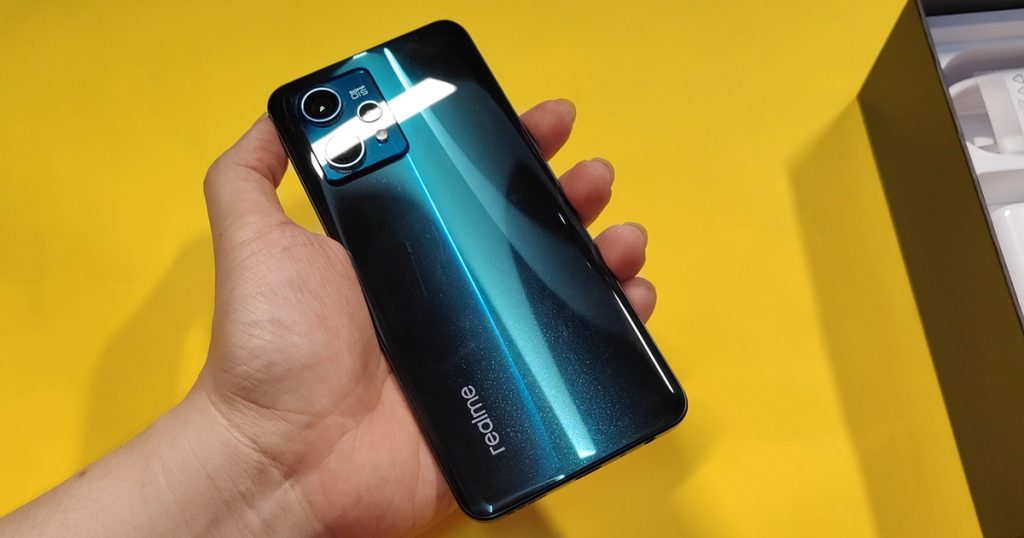 The glass gives the phone an extra layer of sheen, but it also adds to the device’s heft. And yet, even with making the phone feel as solid as it is, realme was able to craft the realme 9 Pro+ to be one of the thinnest smartphones they’ve ever created. With just a thickness of 73.3mm and weighs just under 182g, this lightweight device can lessen hand fatigue for prolonged usage versus other thicker and heavier options.

We got the Aurora Green colorway (a seemingly prevalent color for tech this year) which is a great middle-ground if you want something that’s not as plain as black but not as flashy as the Sunset Blue colorway – you know, the one with the Light Shift Design where if you place the unit under the sun or heavy UV light, the back cover changes color.

And while realme 9 Pro series seemed to drop the statement text from the realme 8 Pro but the overall look of the 9 Pro Series, especially the 9 Pro+ is a bold statement on its own. The design language for realme 9 Pro Series feels like a more mature version of what the company did for their realme 6 release. So far, we’re happy with that decision. 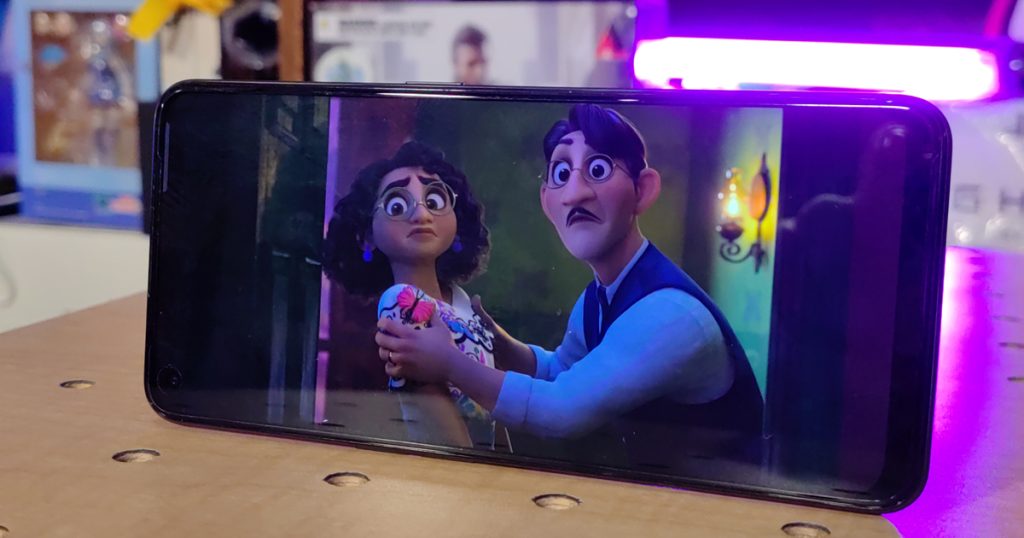 In previous realme releases we had to choose between having an AMOLED screen or having an LCD with high refresh rate. Now, realme has heard our plea and with the realme 9 Pro+ they equipped with upper midrange device with a 6.4” FHD+ (2400 x 1080) Super AMOLED display with 90Hz refresh rate support and 320Hz touch sampling rate.

The 90.8% screen-to-body ratio is great especially when consuming various wide-format movies like LoTR Extended Editions and Dune. But aside from having a gorgeous screen, the realme 9 Pro+ is equipped with Dolby Atmos Dual Stereo speakers – a feature usually reserved for flagship models. 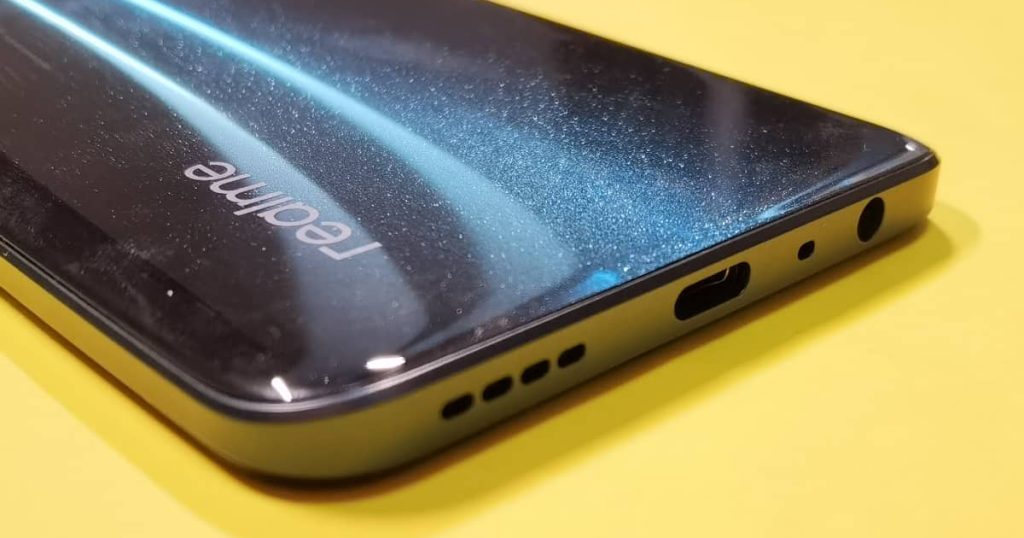 Sounds are punchy and the Dolby Atmos speakers make for a great experience when watching movies and shows. 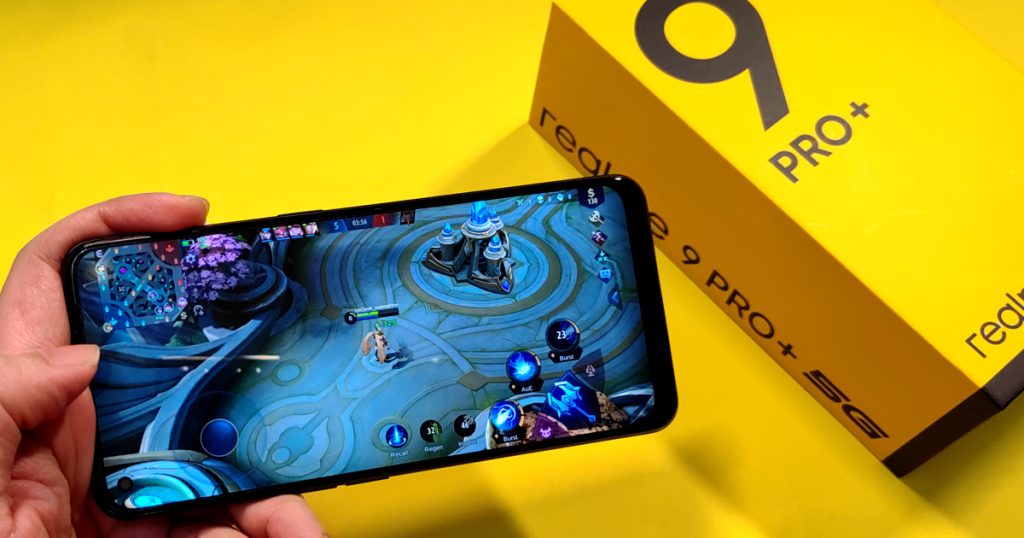 Powering the realme 9 Pro+ is a new midrange chipset from MediaTek: the MediaTek Dimensity 920 5G. An update from its predecessor, the realme Pro+ is one of the first smartphones to use the chipset if not the first one to do so.

Reportedly, it should provide 9% more gaming power than its predecessor, and while that number maybe small, we certainly felt the effects of the new chipset when we fired up some of our favorite games on the phone. 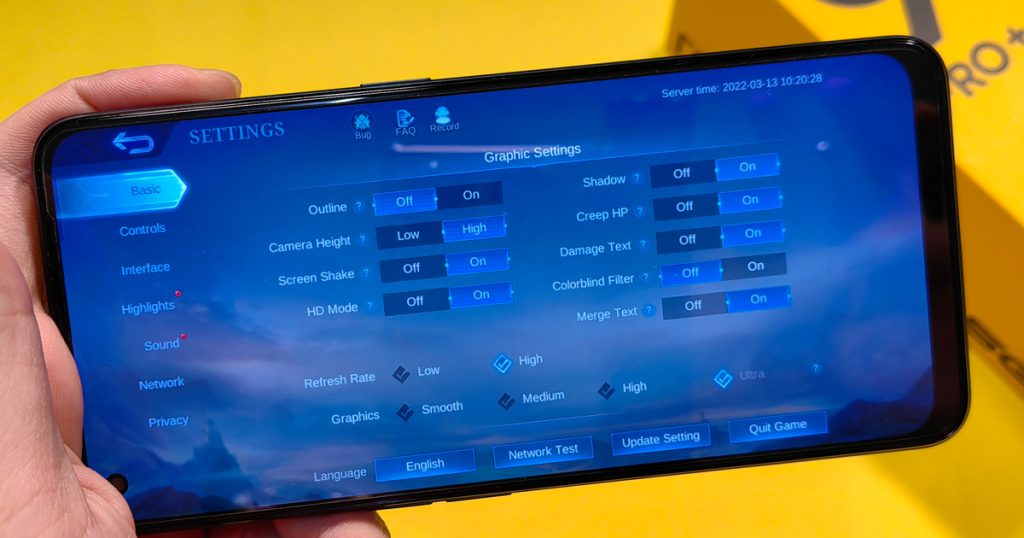 On default Mobile Legends: Bang-Bang is set to the highest graphic levels and performed exceptionally well especially with the 8G of RAM that the phone has. The realme 9 Pro+ can also provide an extra 5GB of virtual RAM if and when you need it.

On Genshin Impact, however, the phone still clocked everything to its low setting (not lowest).

We also tested the unit with a couple of synthetic benchmarks as can be seen down below.

Overall, the MediaTek Dimensity 920 5G is more than capable of running through various apps and games on the realme 9 Pro+. 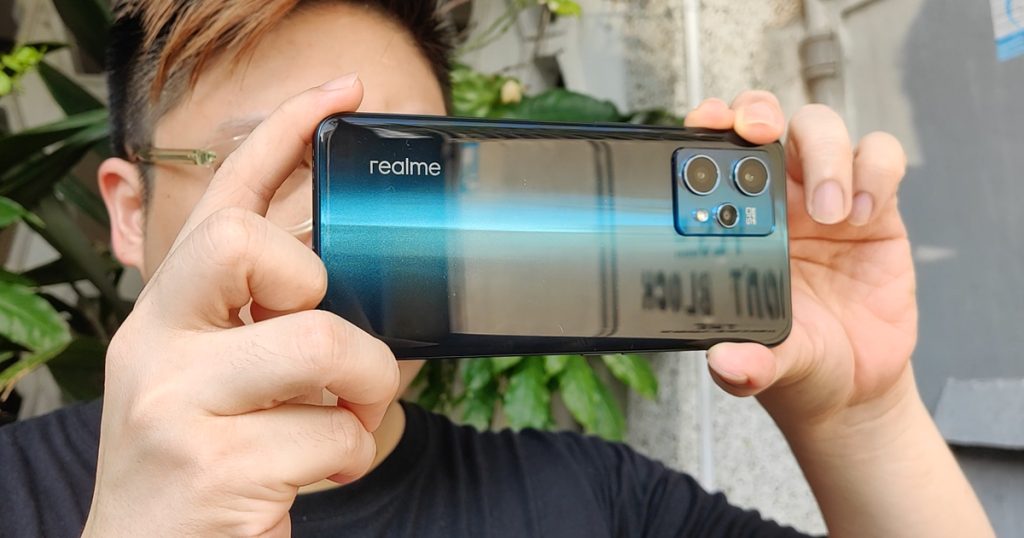 The realme 9 Pro+ is being positioned as a hardcore photography enthusiasts’ ideal companion. While the having a slightly lower megapixel count than the realme 9 Pro, the + variant makes up for this with the inclusion of the Sony IMX 766 Sensor – a sensor that’s usually reserved for more flagship/ flagship-like devices. 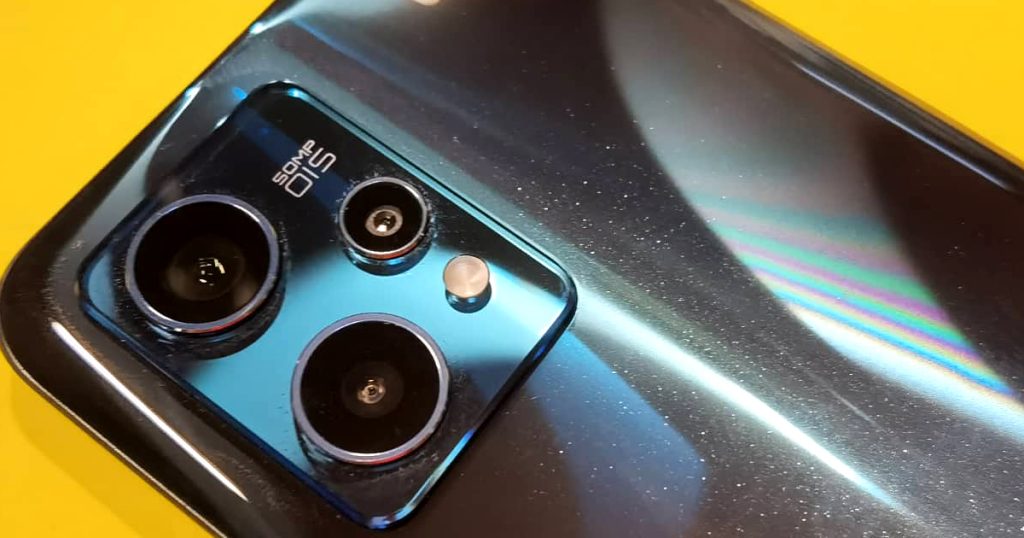 The realme 9 Pro+ is equipped with the following cameras: a 50MP f/1.8 wide camera with Sony IMX 766 Sensor, an 8 MP f/2.2 ultrawide camera and a 2MP f/2.4 depth sensor. As the official campaign of the realme 9 Pro series states these devices should help us #CaptureTheLight, and with the OIS (optical image stabilization) and the Sony IMX 766 Sensor it seems we can do just that. 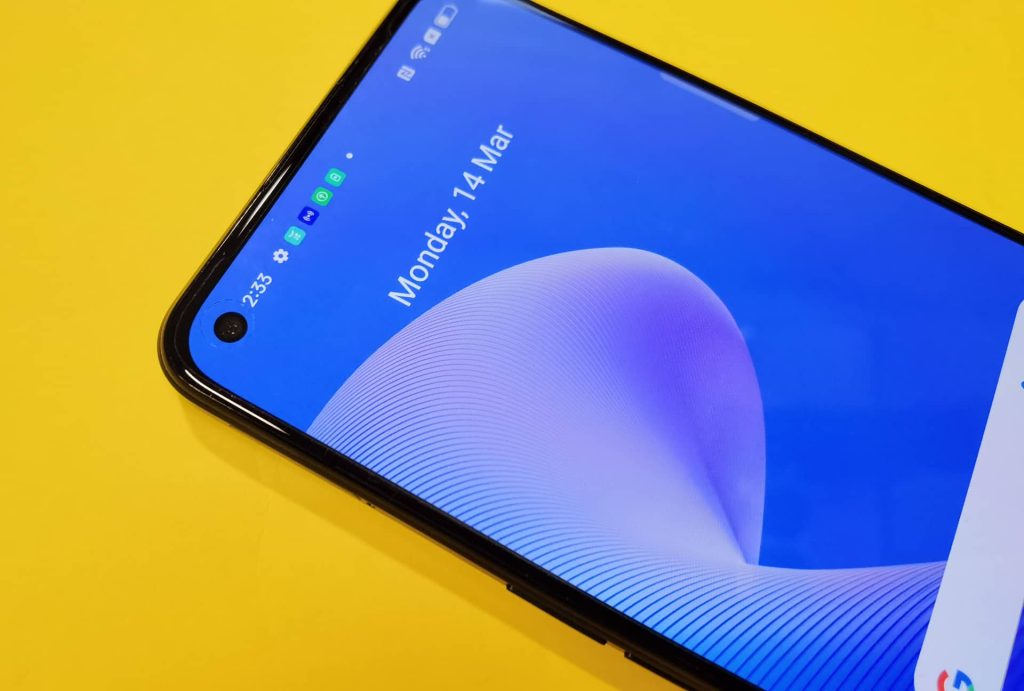 Allowing for easier night shot or low-light photography, the realme 9 Pro+ also comes with various preset settings and night-mode filters to really help one unleash their creativity. These long-exposure settings are found under Street Photography 2.0 where creating zany neon lights portraits or paint your photo with lights are made possible. This and other preset filters will take your low light photos to new heights.

There are also various preset filters that will take your photos to new heights. Check out some sample shots below:

And if you think the low light photo-taking capability of the realme 9 Pro+ is good, wait till you see what it can do during the day.

What we particularly love about taking photos with the realme 9 Pro+ is that the colors do not seem to be overly saturated and blown up. Everything looks pristine and accurate to what you see in the real world.

For selfie lovers, the realme 9 Pro+ is equipped with 16MP In-display camera with an f/2.4 max opening. 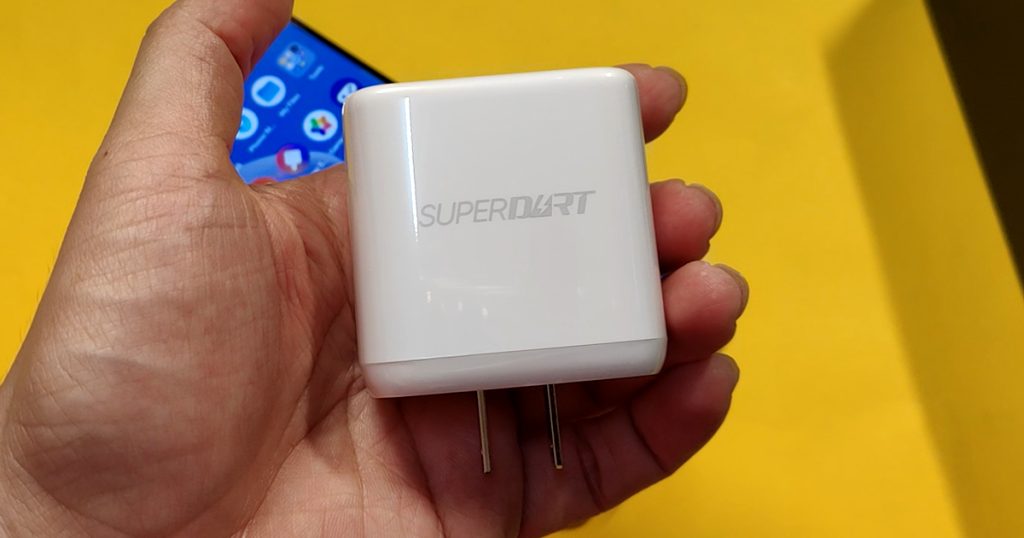 Powering all this is a large 4,500mAh battery with 60W Super Dart Charger that reportedly charges up to 50% in just under 15 mins. On normal usage, the realme 9 Pro+ lasted us more or less the entire day. On extensive game time, the phone lasted me about 3 hours to 3 ½ hours of continuous use before I had to charge the device again. Not bad.

The realme 9 Pro+ runs on the realme UI 3.0 which is built upon Android 12. The new UI makes transitions more fluid and optimized the experience further from its predecessors. 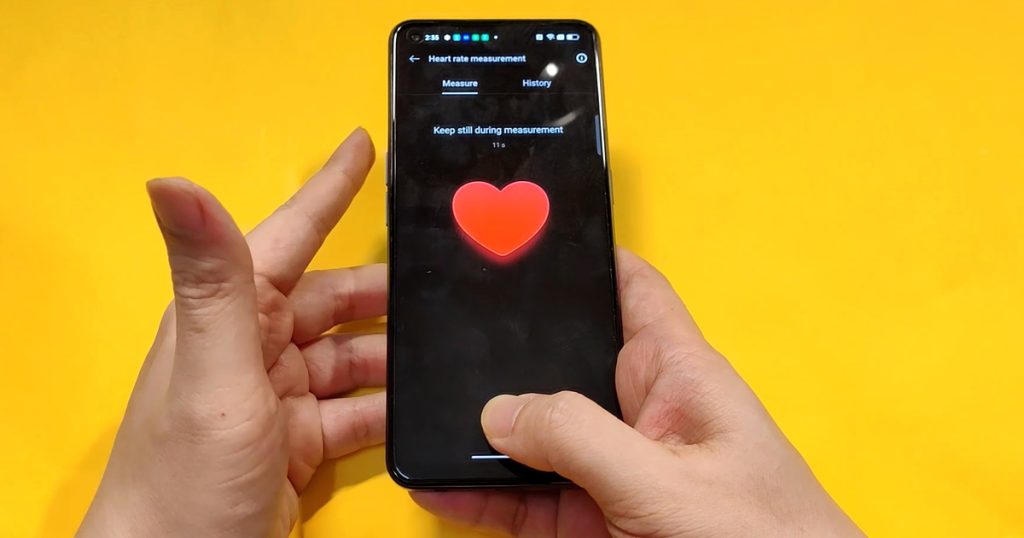 For security, the realme 9 Pro+ has an under-display fingerprint scanner – a feature that we’re happy to see on this price range. But more than the fingerprint scanner, what we’re excited to see is the units ability to read your heartrate on the phone itself.

Yup, the realme 9 Pro+ has a heartrate monitor and awesome haptic feedback as well. This helps with the immersion further. 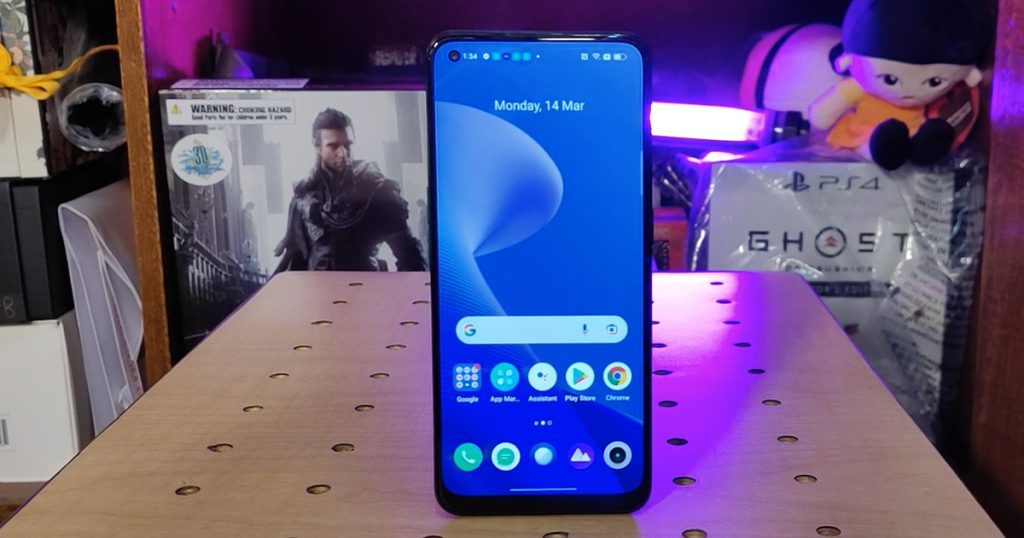 All in all, the realme 9 Pro+ is a great addition to realme’s growing family. One of the best devices we’ve seen produced by the brand, the realme 9 Pro+ offers flagship specs and hardware without the need to shell out a lot of your hard-earned money.

Priced competitively at Php 23,990, the realme 9 Pro+ has an ongoing pre-order promo that slashes the price down to Php 21,460 effectively providing a Php 2500 discount. Check out the official Lazada page of realme for more details.

And while, sure, this is one of the few moments when realme priced their smartphone device above the 20 thousand peso line, with the right balance of an optimized processor, gorgeous display, immersive sound, flagship-like cameras and a design that’s just too pretty not to display, the realme 9 Pro+ is currently our favorite phone from the brand to date.