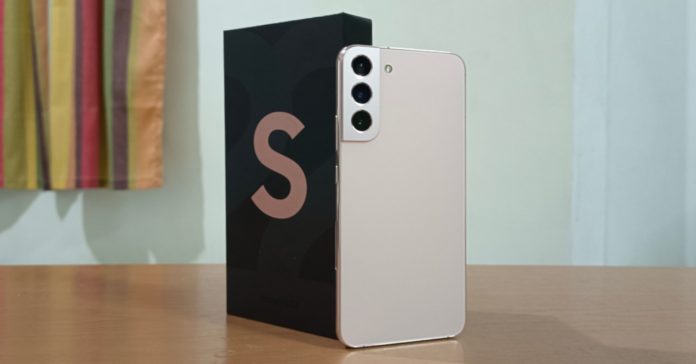 Back in February, Samsung launched its flagship Galaxy S22 lineup in the Philippines. And recently, we got our hands on the Galaxy S22+ 5G, the middle sibling of the series. While it may not have all the bells and whistles (and S Pen) of the Ultra, it does have a bigger battery and a larger screen over the base S22.

The S22+ 5G is no doubt a premium smartphone as it comes with top-of-the-line features, and is built with premium materials. But you will need to shell out some serious dough to get one, or at least splurge on a big postpaid plan.

So, is the S22+ 5G a good flagship phone that is worth the premium price tag? Here’s our review. 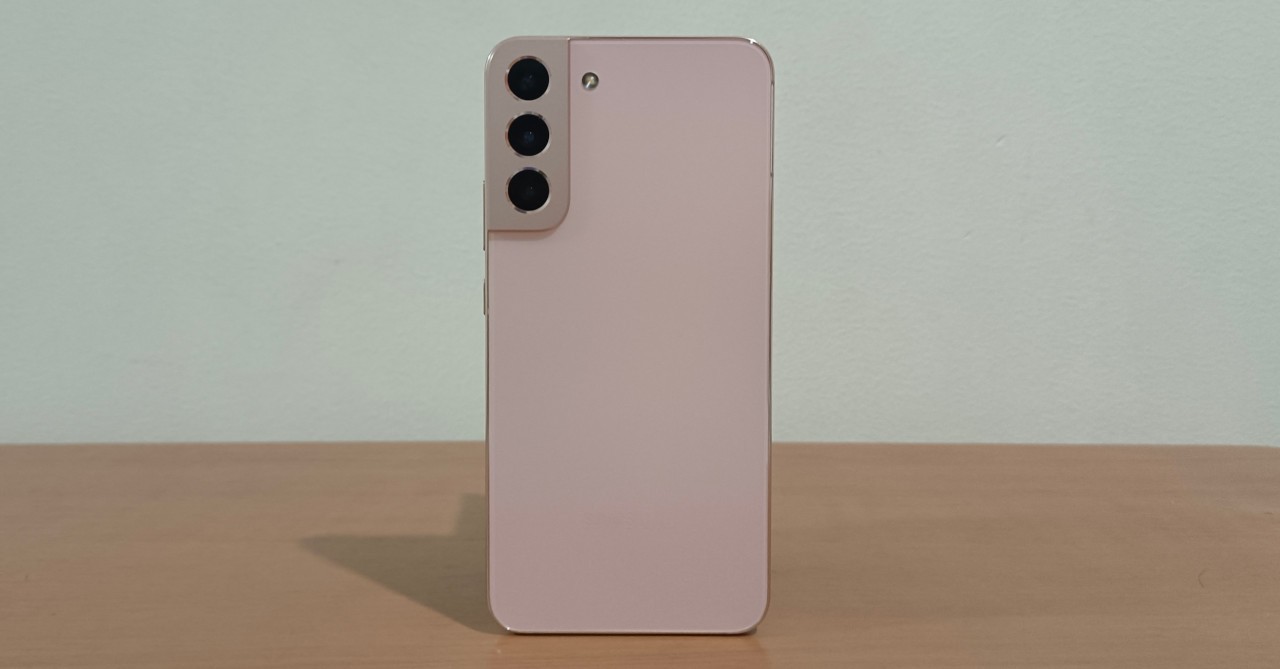 To start off, let’s take a look at the phone’s design. The S22+ shares a similar overall look as last year’s S21 series, with the phone having the same style of camera module cutout on the top left side. The difference with the S22+ over last year’s model is that the camera module now has a closer color to the back. For comparison, the S21 series had a more two-tone look (especially in the Phantom Violet colorway). 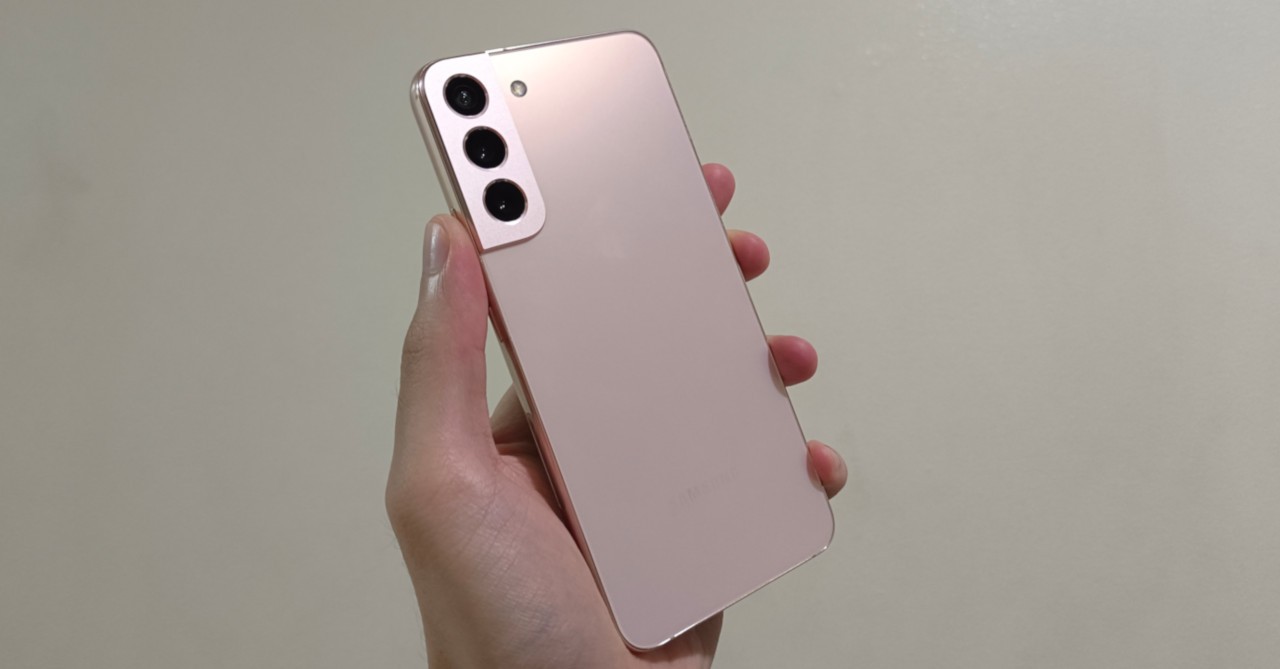 The S22+ 5G is a big phone for sure, though I did find that it was still fairly easy to grip and hold, even with just one hand. Your mileage may vary of course as users with smaller hands may have trouble using this one-handed. Still, what I can say for certain is that, even without a case, the S22+ doesn’t feel slippery. On top of this, the phone’s back looks suitably premium for a flagship device, all while not being a fingerprint magnet (always a plus in my book). 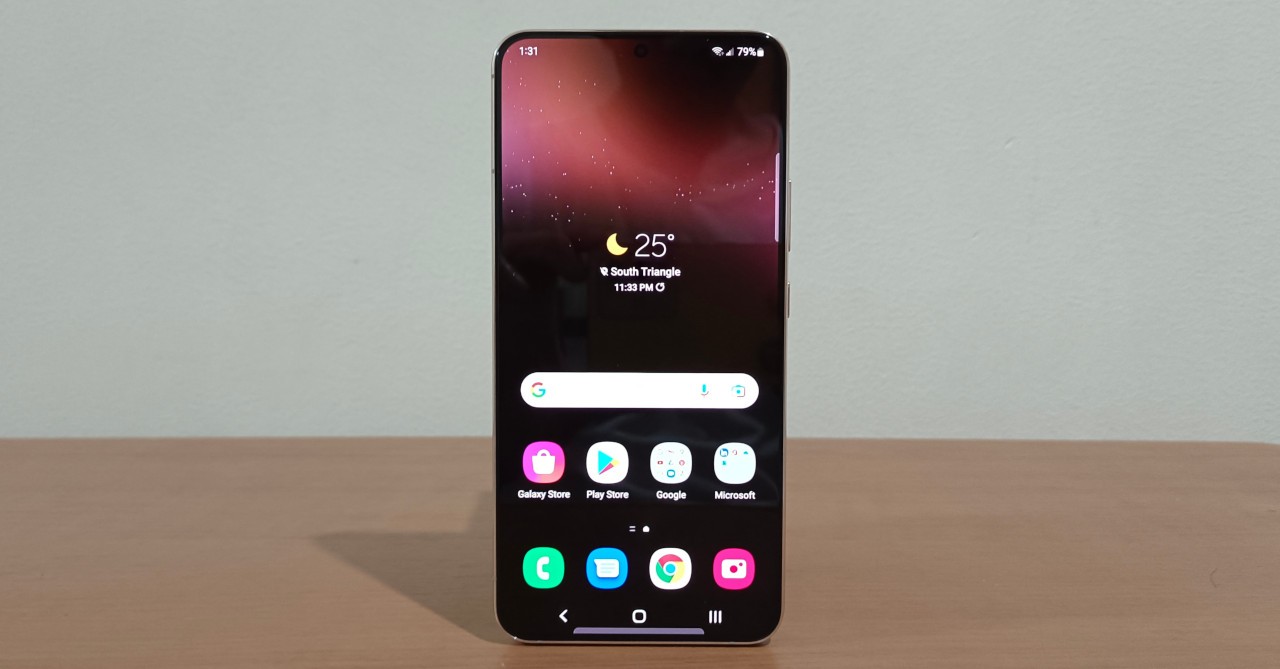 Moving to the front, we have the S22+ 5G’s large 6.6-inch AMOLED display, and it features thin bezels and with little to no chin. Even though it no longer has Samsung’s curved edges from its previous flagships, it’s still a great-looking screen that has an almost all-screen look. 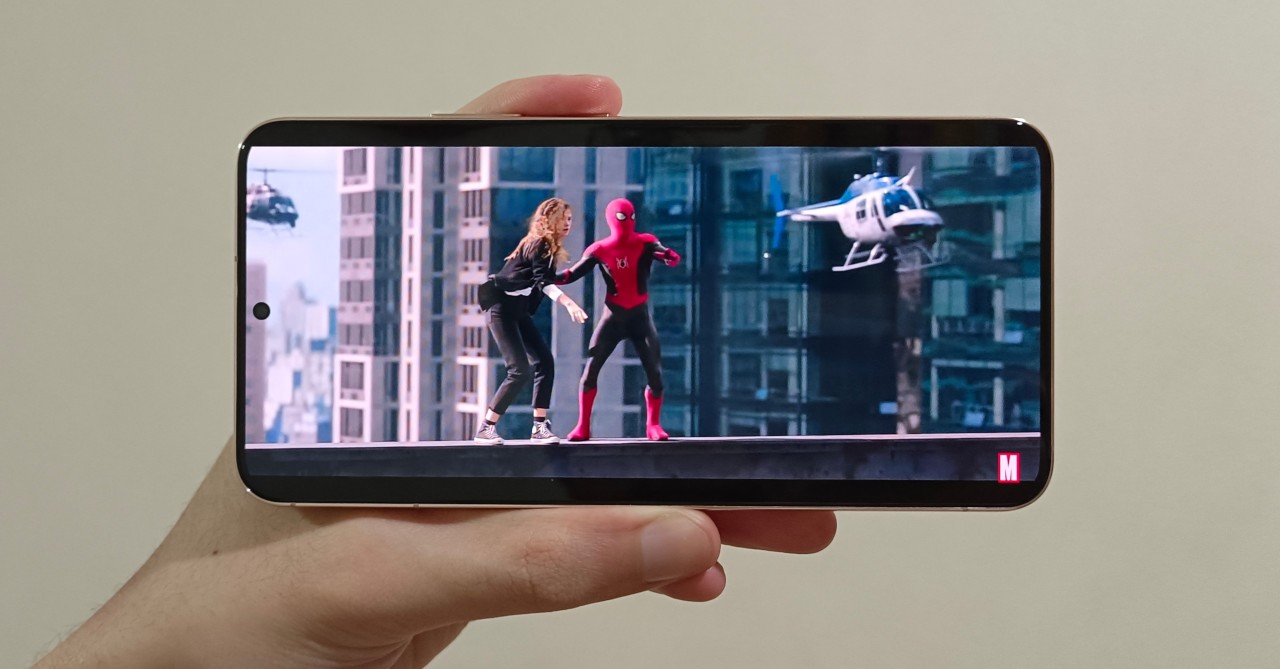 Samsung phones, especially flagships, are known for having vibrant AMOLED displays. The S22+ is no exception as the phone’s 6.6-inch display is one of the best when it comes to binge-watching. Thanks to the good level of brightness, vibrant color output, and deep blacks, watching your favorite movies and shows is a great experience on this phone. It also helps that the display is big which is satisfying for binge-watching.

It also helps that the S22+ has onboard stereo speakers that get quite loud and blow most other phones away in terms of sound quality. If you’re not particularly picky about audio quality, you can get a good viewing/listening experience on these onboard speakers. Though as always, I would still recommend using external speakers or headphones for a better experience. Take note that you will need either a USB-C to 3.5mm dongle or a wireless audio device as the phone does not have a headphone jack.

While previous Samsung Galaxy S phones released in the Philippines are powered by Exynos chips, the Galaxy S22+ 5G packs a Snapdragon 8 Gen 1. The Exynos processors are generally powerful, though in my experience, they tend to run hot for gaming. So how does the new Snapdragon flagship SoC fare? In our test, it did better in the temperature department while maintaining great performance. 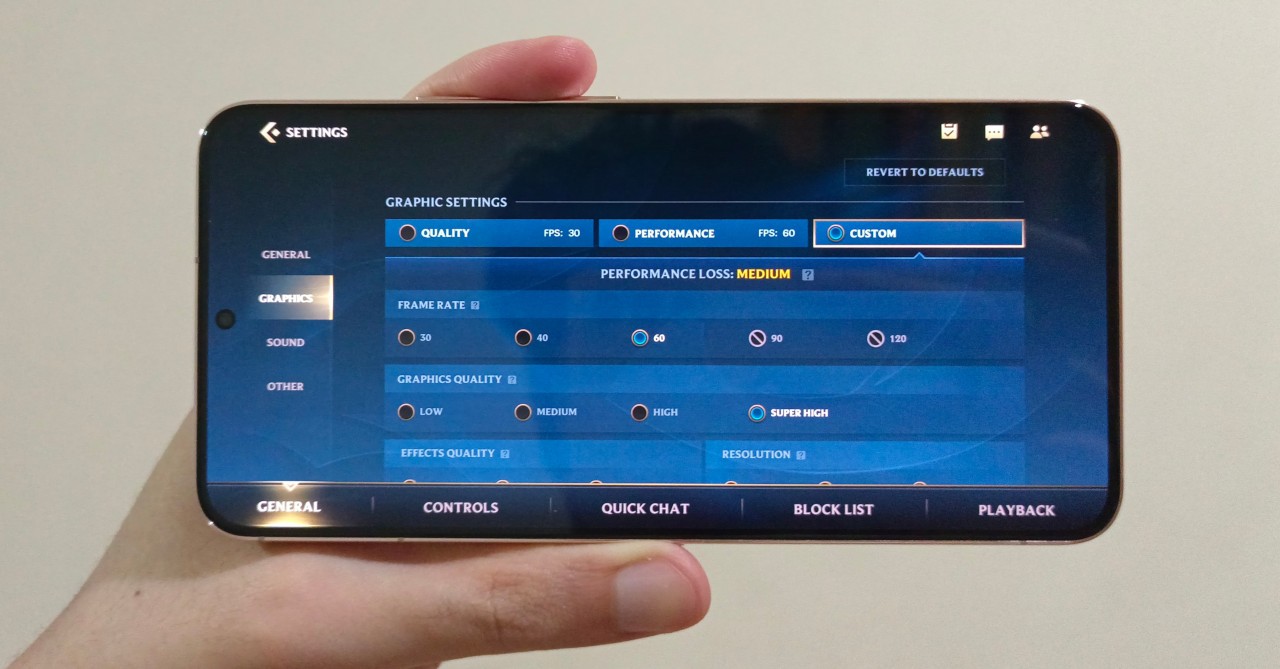 As expected, the S22+ can easily run today’s popular games with ease at the highest graphics settings. For example, Wild Rift easily ran at the Super High graphics quality with a smooth frame rate. 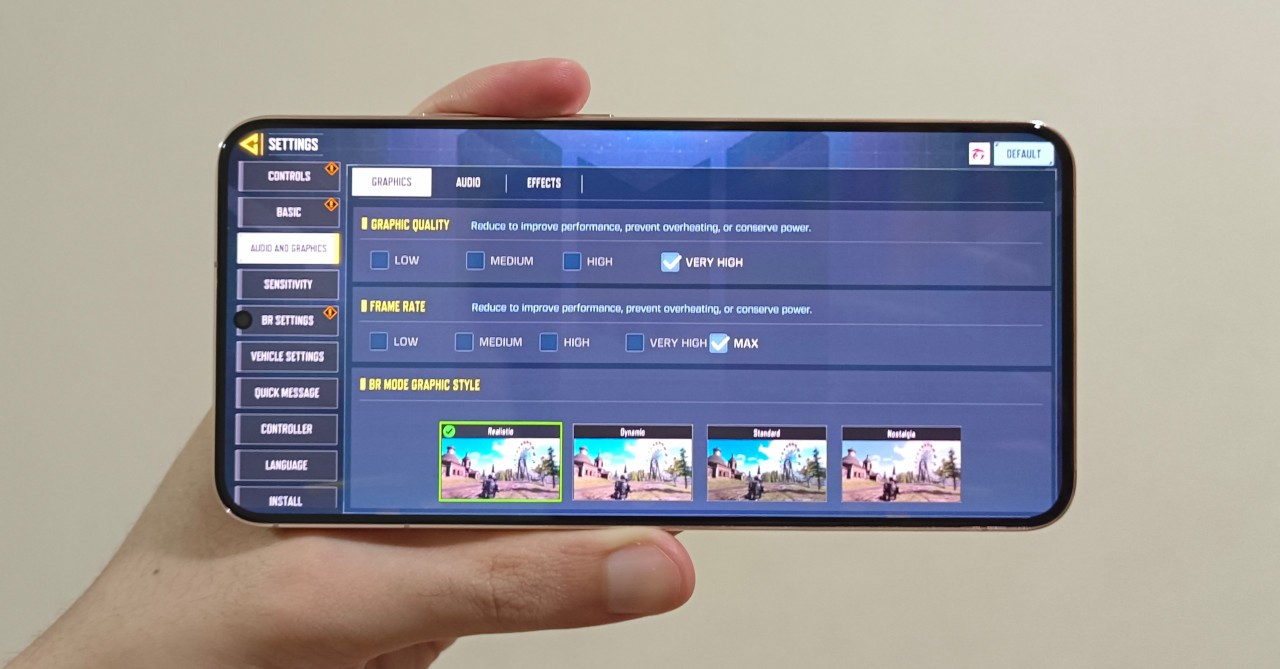 Games such as Call of Duty: Mobile also ran at the highest graphics quality and frame rate options. Even the most hardware intensive games can run on the S22+, though you may have to play around with the settings so that framerates are stable and the temperature don’t get too warm.

Another great thing about the S22+ gaming-wise is that it packs a 120Hz refresh rate display. This, coupled with the powerful processor means you can enjoy games that support high framerates. Plus, the 5G connectivity of the phone is also great news for multiplayer games as 5G promises faster speeds and lower latency.

For its cameras, the Galaxy S22+ packs a 50MP wide + 12MP ultra-wide + 10MP telephoto (3x hybrid zoom) triple rear shooters setup, as well as a 10MP selfie camera. In our photography test, the cameras lived up to our high expectations.

First off, the 50MP main camera is great for taking photos in the outdoors during daytime, with images taken in these conditions having a high amount of detail and good colors. Indoors, image quality is also good overall.

At night, the S22+ 5G’s main camera continued to impress. With the phone’s camera app, the Night Mode feature automatically deploys when the app detects low light conditions. In my experience, this triggered reliably, and resulted in high quality nighttime photos.

The 12MP ultrawide camera also did not disappoint, with daytime images being close to the same quality as the main camera shots when you don’t zoom in. The low light photos also impressed as the images aren’t as blurry and dim as you would expect from an ultrawide camera. Much like the main camera, the Night Mode feature was also used automatically with the ultrawide during low light conditions.

The 3x telephoto shooter was a pleasant surprise. In daytime, the 3x zoom shots were good as expected, but I was surprised at how sharp and detailed the 10x zoom shots were. I expected these digitally zoomed shots to have noticeably lower quality, but the images still retained a good level of detail that almost makes it seem they were captured by 10x telephoto shooters.

Though in low light conditions, the telephoto camera does see step down in quality, even when using Night Mode. Still, the results are decent, just remember to activate Night Mode as it may not automatically deploy when using this camera.

Finally, selfies are of good quality with the S22+. Most users should be satisfied with selfies taken on this phone, even when relying on Auto Mode without any filters.

As you would expect given its strong gaming performance, the S22+ also worked well for everyday use. Whether you need to use a phone for emails, word processing, or even some photo/video editing, the S22+ has more than enough power to run them without slowing down.

Aside from reliable performance, the S22+ also runs on One UI 4. Personally, One UI is my preferred Android UI (aside from something closer to stock Android) as it looks great, and is easy to use and navigate. Your mileage may vary, but most users should have no issues with the S22+’s UI. 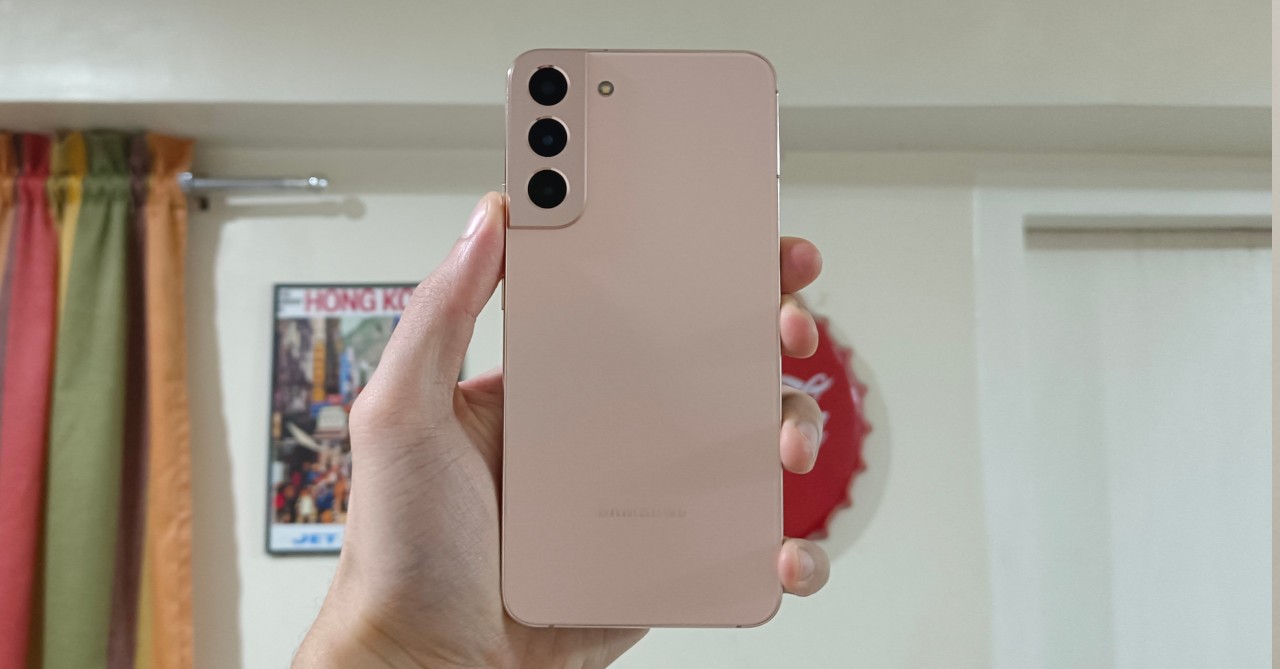 Finally, let’s talk battery life. Previous Galaxy S devices had average battery life in my experience. But with the S22+, battery life won’t be an issue as the phone can easily last for over a day, even with heavy use. In fact, in my standard use, it lasted for two days before I needed to charge it.

If you do need to top up, the phone supports 45W Fast charging and fast wireless charging. Though do take note that the S22+ does not come with a charger inside the box, so you’ll have to buy a fast charger for it to enjoy quick charging times. 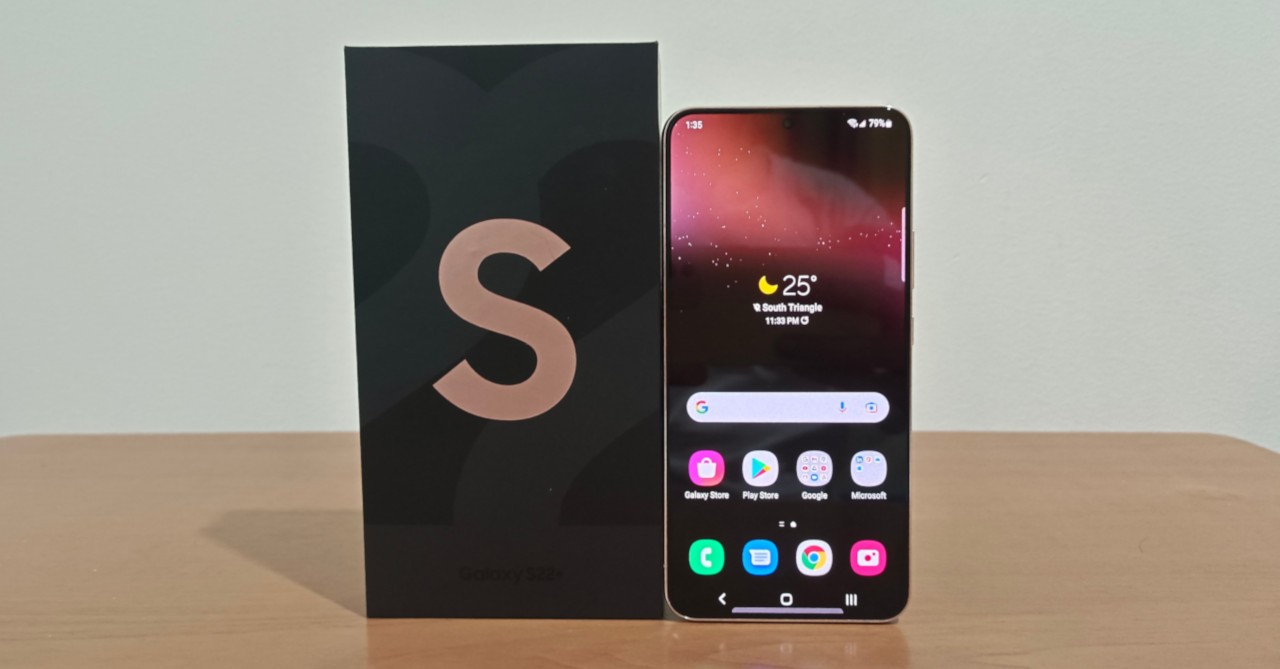 The Galaxy S22+ is overall a great phone as it packs great performance, long battery life, and one of the best displays on a smartphone that you can get. Of course, you’ll have to spend PHP 56,990 for the 128GB model, which is definitely quite pricey. But if you are willing to splurge on a top-end device, the Galaxy S22+ will not disappoint as it doesn’t really have any major drawbacks.