The Adam Project Movie Review | Should you watch this Netflix original? 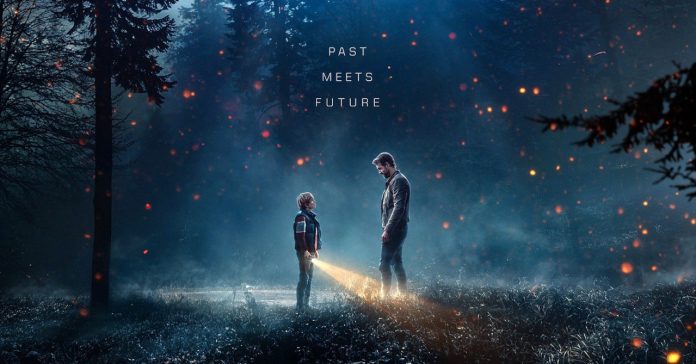 Ryan Reynolds has been busy during the two-year timeskip we’ve all been living through. Having been in six productions since 2020, and with two more currently in the oven, we’re basically living in the renaissance of Van Wilder right about now. It’s a dated reference, I know–and I stand by it.

In spite of the steady string of films he’s been in lately, it’s hard to actually get tired of (arguably) our favorite Canadian. While one could argue that it’s come to a point where Ryan Reynolds actually portrays himself in all his newer films, it’s a concept that just–well, works.

The Adam Project is his latest film straight out of Netflix. With Shawn Levy taking charge and an all-star cast backing him up, how much farther can the Ryan Reynolds hype train go? While the time-travel trope has been done to death…time and time again, there’s quite a bit of enjoyment to be had in this one. Let’s talk about it.

Adam Reed steals the show. Both of them do.

As one would expect, the script makes up a huge portion of the film’s backbone. No matter what the genre or plot may be, for as long as it stars Ryan Reynolds, you can expect that quality brand of humor–and it doesn’t disappoint. I say this not to praise Reynolds alone, but to give credit to Walker Scobell–the younger Adam in this Project.

Finding younger actors who can actually, well, ACT is already a gamble. Even more so if you’re playing the younger self of the man who’s quite literally Deadpool. How does our boy Walker fare? Well, with a slight suspension of disbelief, you can actually say that he is, indeed 12 year-old Adam Reed. Their exchanges felt natural, and the banter doesn’t go overboard to a point where any joke or remark sounds shoehorned. There was a certain amount of chemistry between the two, and I enjoyed the moments whenever they were both on-screen–even if it entailed a slight exposition dump.

Writing up some clean humor for a family-friendly film is a challenge. There’s a lot of room for cringe, should things go awry. At the very least, these possible moments were prevented with a good amount of self-awareness. Good save.

A movie about time that doesn’t waste time

Remember how I mentioned a slight exposition dump? By “slight”, I meant almost none at all. With more than 90 minutes in its runtime, this movie has really fast pacing–but not breakneck speed where you’d miss out on the plot, but fast enough eliminate any chances of experiencing any lulls. While the dialogue made up a lot of what made this movie enjoyable, the rest of the cast did their best in the amount of screen time they were given. This is a Ryan Reynolds vehicle after all, but that’s not to say everyone else didn’t do a good job.

Jennifer Garner and Mark Ruffalo make their time-traveling return as Ellie and Louis Reed. Given their age, they portrayed quite convincing parents to both young and old Adam. They had their own personal struggles and problems to deal with, and while we don’t see them as often as the Adams, they never become afterthoughts in the movie. I very much enjoyed this quasi-30 Going on 30 reunion in my headcanon.

Zoe Saldaña did what she does best–show up, blow stuff up, and still deliver an emotional performance as Laura, Adam’s current/past/future wife–time travel, I know. While some would believe she’s been typecast as a hardened action star since her foray into the MCU, we tend to forget that she was Eva Rodríguez in Center Stage. I should really stop making these references before people realize I’m 50 years old.

Lastly, Catherine Keener alongside Alex Mallari Jr. bring some much-needed villainy into the mix. Not too cartoonish, not too diabolical. Keener does a swell job as Maya Sorian, the one behind the story’s mysterious main conflict. Mallari Jr., as Christos, does a splendid job at taking pleasure in kicking Ryan Reynolds’ ass. It was a wise choice to make them just a teensy bit 2-dimensional as antagonists, though. Giving them too much depth could stop the plot in its tracks, and making their intentions simpler gave the movie an easier chance for resolution. Make no mistake, though. If it were any other film, this would’ve been a a crime. But given the family-friendly and mostly light-hearted nature of The Adam Project, they did just fine. No complaints here.

Come for the action, stay for the feels

Now that we got all the action and verbal jousting out of the way, let’s talk about what I believe gave this film a bit more depth than one would expect, given how the trailer plays out. While The Adam Project is a fun film overall, I do appreciate how weave together seriousness of time-travel as a concept, and the value of time itself. Talking in depth would spoil too much, so I’ll keep it short and sweet.

They don’t cut corners in tackling subjects such as grieving, acceptance, and expressing one’s pure emotions. They don’t cop out by pulling a Deus Ex Machina at any point in the film either. Time is valuable, and while traveling through it was a possibility in the story, the repercussions were still very real–and whatever outcomes came to be couldn’t be changed. There’s a lesson to be learned in making the most out of whatever time you have at your disposal, for it’s as fleeting as one could possibly imagine.

I do enjoy a good laugh like the next person, but an unexpected wave of catharsis is something I welcome with open arms. The Adam Project managed to bring that wave in its own special way.

The Adam Project doesn’t bring anything new to the concept of time travel as a film’s subject matter, but it manages to show a more light-hearted side to it. When I think “time-travel” in film, my first thoughts are either sci-fi dystopian versions of the world a la Terminator or anything involving a relationship going through hardship. It was never both–at the same time. Perhaps I need to watch more movies in the genre, but I found this strange amalgamation quite refreshing.

Shawn Levy has come a long way, and he learned a lot from his time with Ryan Reynolds in Free Guy. You can still see shades of Night at The Museum when it came to set pieces, and Date Night when you’d see how the characters interact. His directing filmography never had a clear “theme” like other directors, but given his recent projects, I’m kind of psyched to find out what he’ll do next.

If you’re looking for a nice movie to watch with the family–something that turns up the action, brings a few laughs, and manages to tug on your heartstrings, then I do recommend you check this one out.

The Adam Project launches globally on Netflix on March 11, 2022.