The Hong Kong Massacre Review | One Shot, One Kill

A cinematic and strategic quest for revenge. 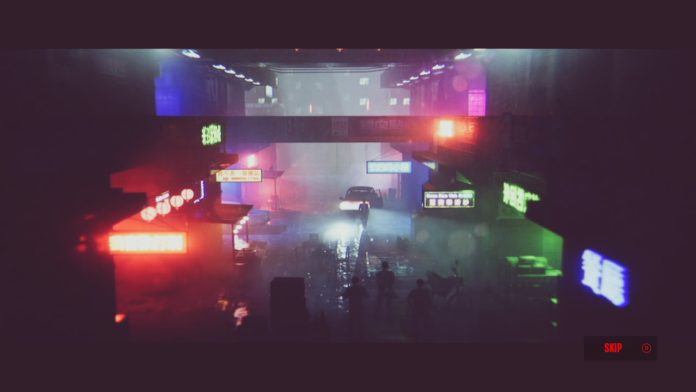 The Hong Kong Massacre is a top-down shooter video game developed by Vreski. The game’s ambiance immediately reminded me of Max Payne, The Matrix and some of John Woo’s action movies like “The Replacement Killers”, and “The Big Hit,” but in this game, busting some caps ain’t gonna cut it. In terms of gameplay it has its similarities to another game called Hotline Miami. 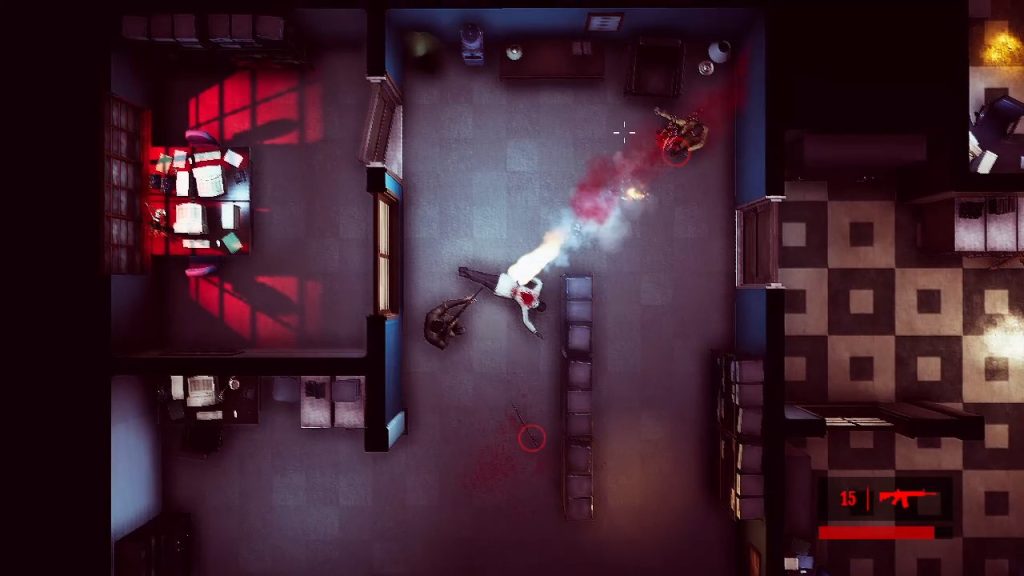 In this game, you, the player, takes the role of an ex-cop; more specifically, a former detective who is out for vengeance and probably a slice of justice, except without the usual red tape that is “due process”. Armed with a variety of firearms that you usually pick up by disposing of its former owners, you will light up the stage through a systematic, brutal, and cinematic display of firefights meant to cleanse Hong Kong of its criminal underworld. 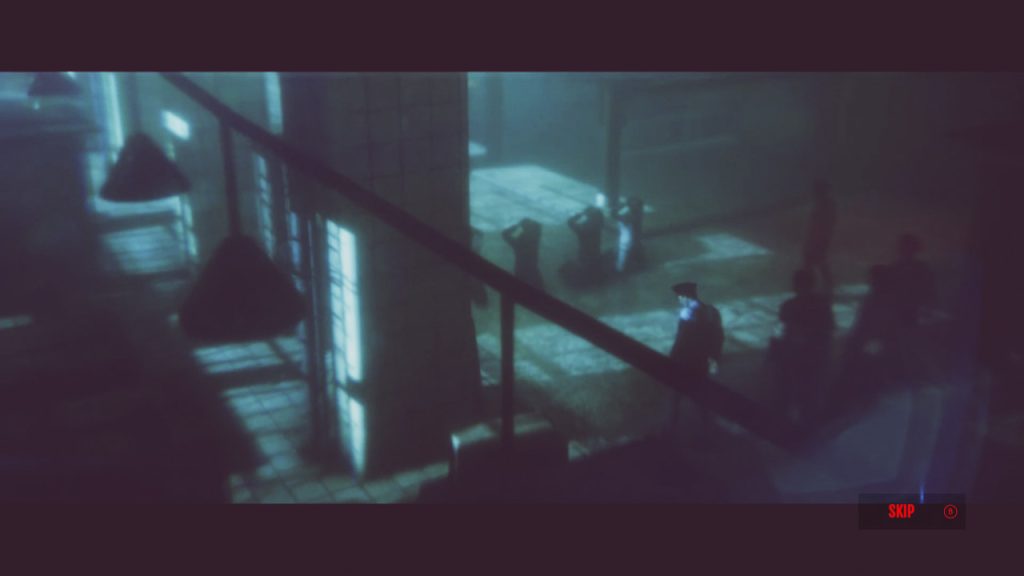 Let’s talk gameplay. I am a fan of Crimson Lands which is another top-down shooter where you basically paint the town red with your victim’s blood splatter. However, for The Hong Kong Massacre, the game uses the same one shot, one kill gameplay that can be found in Hotline Miami. Unlike Hotline Miami, the game is more grounded due to its detective story theme. You are also equipped with a slow-motion ability that consumes a slow-mo bar but recharges over time, as well as a dodge ability that makes you somewhat invincible during the backflip, slide, or diving role your character will perform. 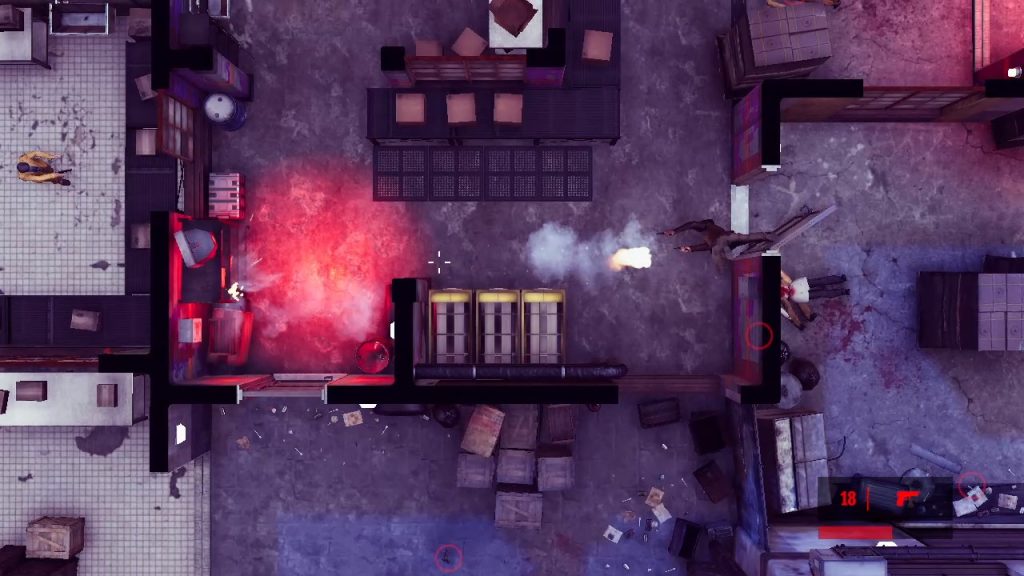 With regards to the guns, you start off with the basic double pistol, but along the way, you can pick up better guns along with the many corpses you will be making throughout the stage. From double pistols, to shotgun, to small machine gun, and lastly the assault rifle, death dealing is as easy as flipping a switch, but the same can be said for you as well since you are also a one hit wonder. The game is naturally difficult and only the boss characters have an actual health bar you need to reduce to zero, and they are faced at the end of every chapter. 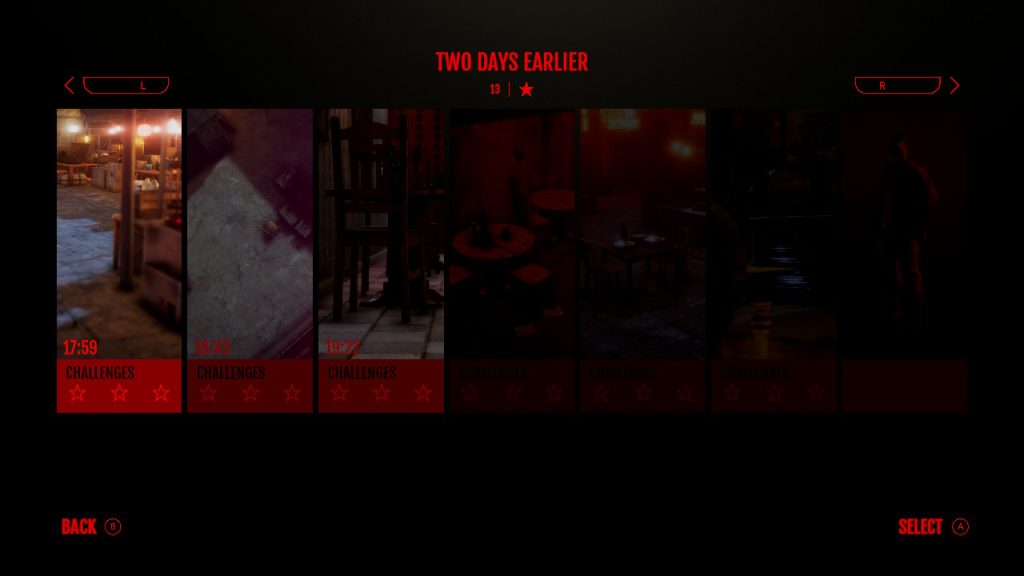 The game takes no prisoners and every stage follows a similar “clear the whole area by wiping out everything that moves” formula, with guns blazing obviously. After successfully finishing a stage, you earn a star. However, every stage has its challenge rewards that are basically the same which will allow you earn more stars. These stars you earn allow you to unlock more guns that you can start with, as well as giving you the chance to upgrade them to having more bullets in the clip or getting a better fire rate, among others.

Now, as I have said before, the game is naturally difficult given that it only takes one hit to take you out. What’s more is that those criminal scum that you are hell bent on cleaning up are pretty accurate and generous when it comes to spraying their bullets. These goons are also not the easiest to sneak up on either, and that’s where the slow-mo and dodge ability comes in to increase your chances of survival. In fact, you kind of need to use that slow-mo ability a lot for this game. When using the slow-mo ability, obviously everything slows down except for your ballistic speed as it would seem that your bullets still instantly hit its target while your enemy bullets are reduced to walking speed. 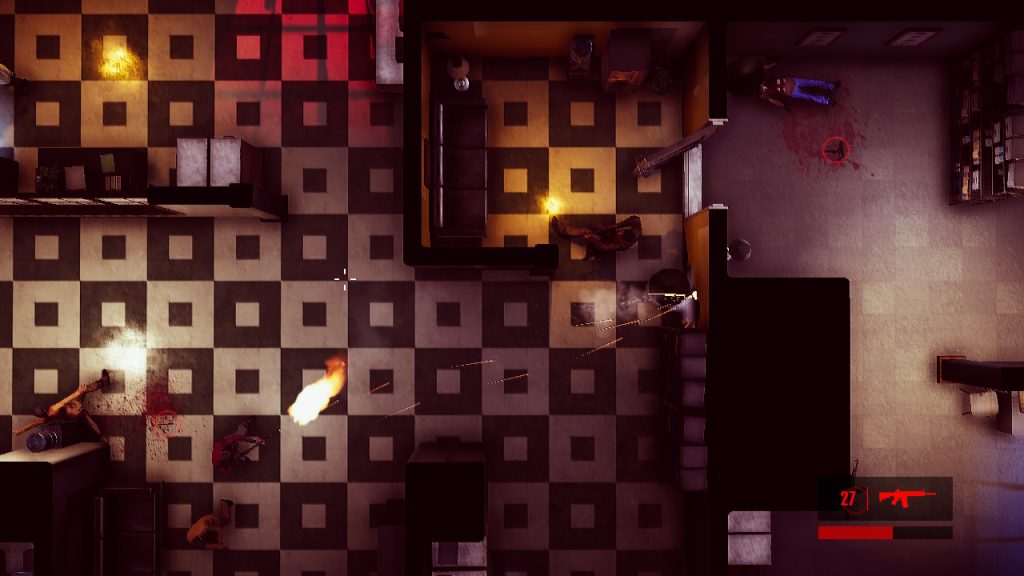 Having both the slow-mo and dodge makes for a great pair for some of the best cinematic kills you will have in the game. Some of the most enjoyable moments of the game is just busting through a room surrounded by three to four bad guys in slow motion and doing a leap dodge move while shooting all the enemies in 360 fashion with stylish flair. Challenging and simple is how I would describe it. There is a formula to how to go about when it comes to clearing a room. You can catch enemies off-guard by using doors as cover (until it breaks of course) or side step in and out of cover through a particular wall or book shelf in the environment for advantage, and then pick off foes one by one. It is all about learning the floor plan of each level, the positions of enemies, strategize your best course of action, and then go in guns blazing. 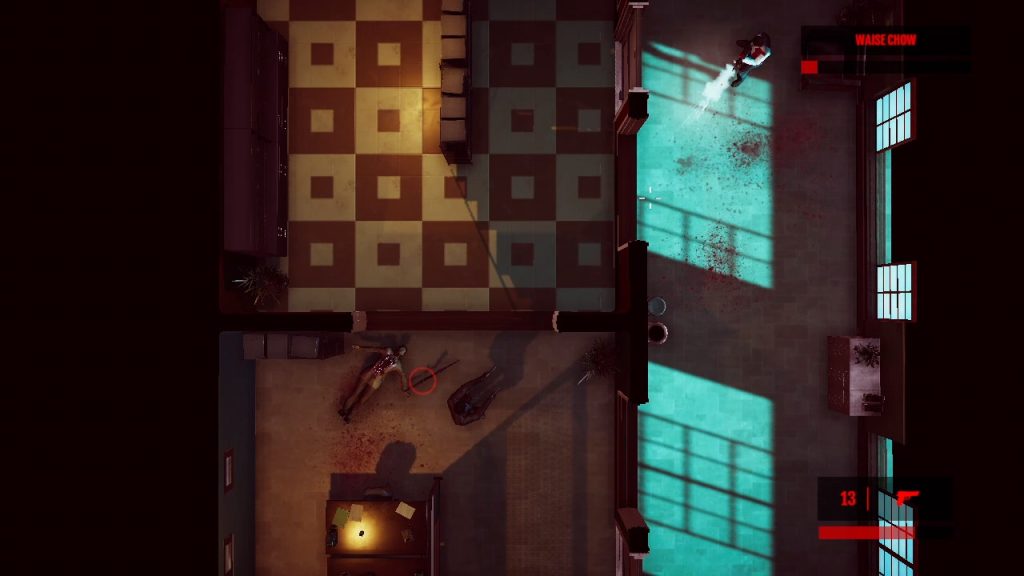 Boss fights are another thing since they have a health bar on them. Sadly though, the boss fight stages are pretty much all the same where you and the stage boss start out parallel to each other and both you guys run through a gauntlet to reach the end of the stage while shooting at each other form the other side. But soon enough you’ll figure out that you don’t really need to run the gauntlet, and with proper preparation and wall hugging, you will be able to takeout the level boss in no time.

With regards to the controls, since this is the Switch version, to be honest it takes a lot of getting used to. Normally for me when playing with top-down shooters like say Crimson Lands, I’d prefer it on PC with a mouse and keyboard. Using the Switch doesn’t hinder the enjoyment you will get but the controls could be a little fiddly with the small analog sticks, especially when lining up shots using the right analog stick for aiming. There is an auto-aim function in place at least that kinda helps. 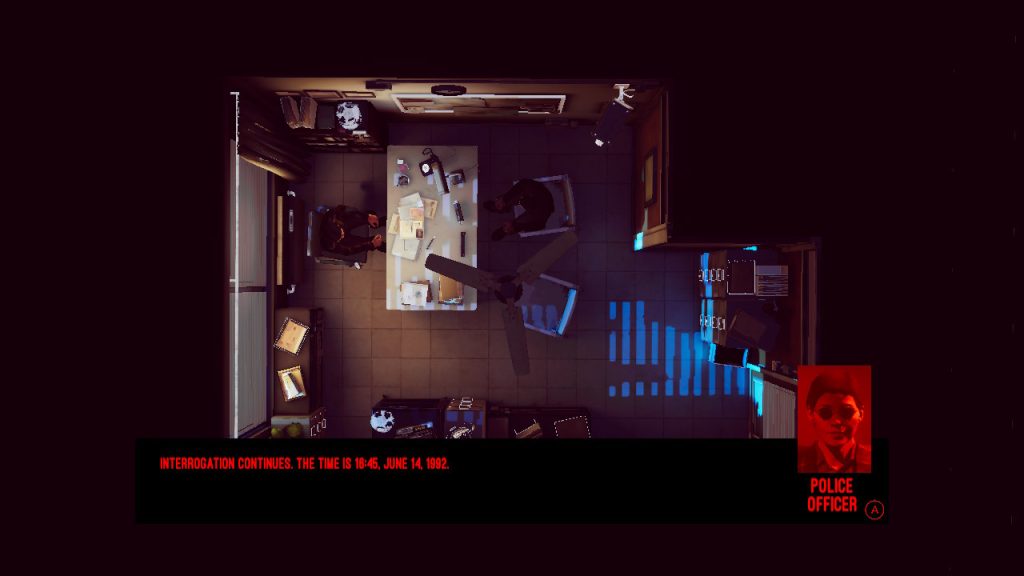 Story-wise, the details are told through the use of some foreboding cut scenes and top-down bar talk and interrogations from another police officer’s desk complete with the slow turning ceiling fan. As the narrative goes, it recounts your actions over the previous days in your quest for revenge, which is honestly all too cliché and not very engaging for me, but its environment and setting does lend for a nice atmosphere that matches the gameplay.

The Hong Kong Massacre is an enjoyable top-down shooter that loves side stepping on and off of walls (or doors) but that is all it really is. It is satisfying to clean house waves of enemies by crashing through a window, blasting them away gunshot after gunshot in all its slow-mo glory. There’s plenty to like about the game, and even if it’s not the most original or revolutionary, it’s still definitely fun to play.

The Hong Kong Massacre was reviewed on Nintendo Switch and a copy was provided to us by the publisher for review purposes.

The Hong Kong is a stylish top-down shooter that, while not being the most original game out there, is an enjoyable experience. The Hong Kong Massacre Review | One Shot, One Kill