Is the seventh Two Point Hospital DLC worth getting? 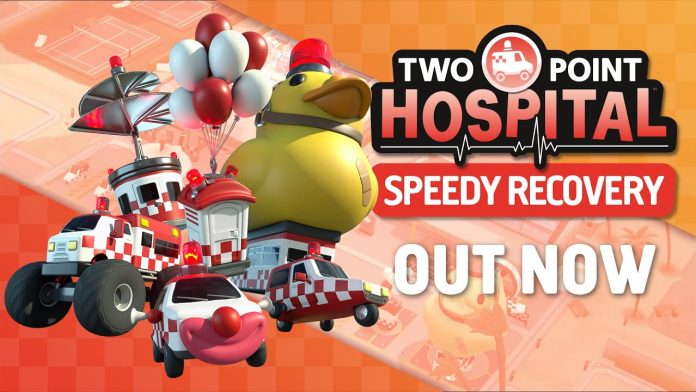 Two Point Hospital: Speedy Recovery is the seventh DLC of the business simulation game Two Point Hospital that we played two years ago on the PS4. It was my first game of this genre, and I had a great time with it, being lost in time as I had to manage your ever-growing establishment, providing healthcare to those inflicted by diseases of the strange kind. All of this while minding that tight budget that must be distributed to every equipment and personnel you hire, and turning the establishment into the most efficient and the best looking Hospital in the country.

Once we become the outstanding healthcare facility in the country, our business will eventually run itself, leading to nothing else to do. Thankfully, TPH: Speedy Recovery added lots of new things. But is this DLC enough reason to go back as the Hospital Administrator in this world of wacky diseases? Let’s have a closer look at Speedy Recovery.

You call, we respond 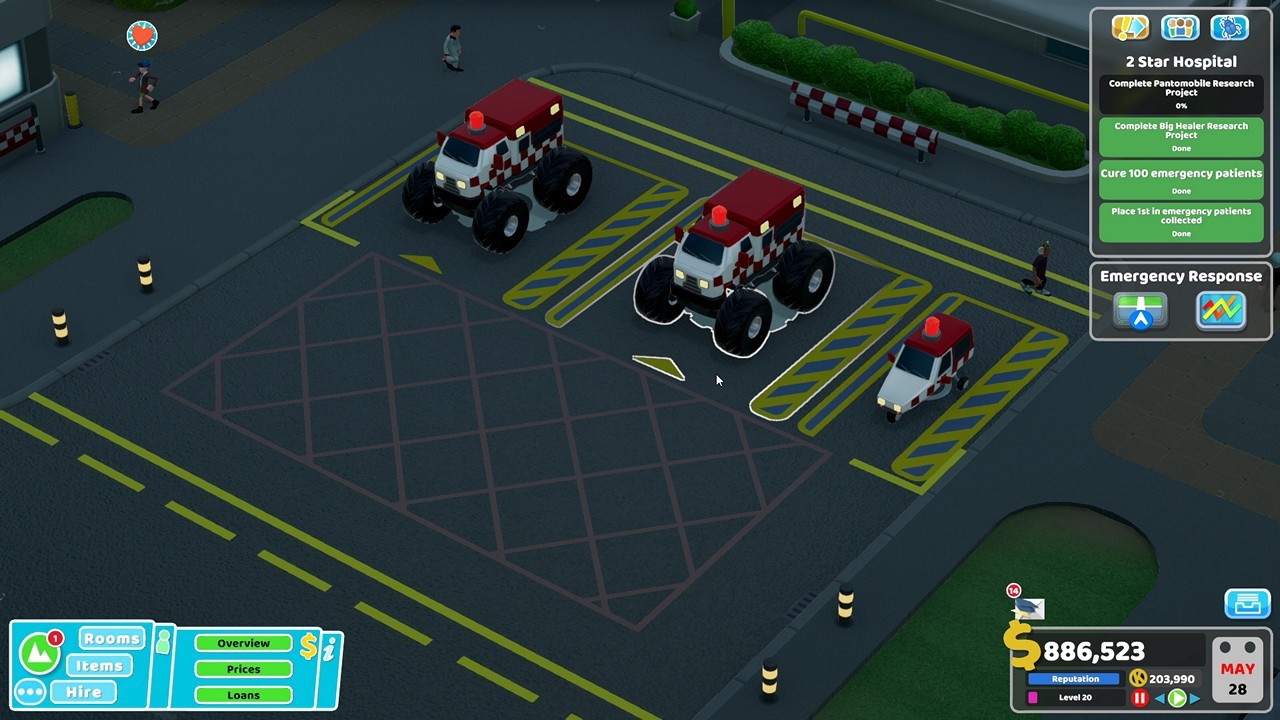 Given that this is a DLC, Speedy Recovery adds new activities to micro-manage in an ever-growing hospital business that is already flooded with tons of activities. But Two Point Hospital: Speedy Recovery’s main addition to the base game is the ambulances. Yes, ambulances, it just made me realize that the game didn’t have any ambulances before. I find it funny considering that we run a hospital, and a huge one in that regard. But that is beside the point because we have six new ambulances ready to respond in emergencies around our jurisdiction.

Depending on the location of our hospital and with the addition of new areas: Ailing, Betts Shore, and Pointy Pass, you can respond and transport emergency patients through land and air. Road Ambulances include the Big Healer, Compliant Colin, and the Pantomobile; while the Air Ambulances include the Feather Balloon, Airloovator, and Relicopter. 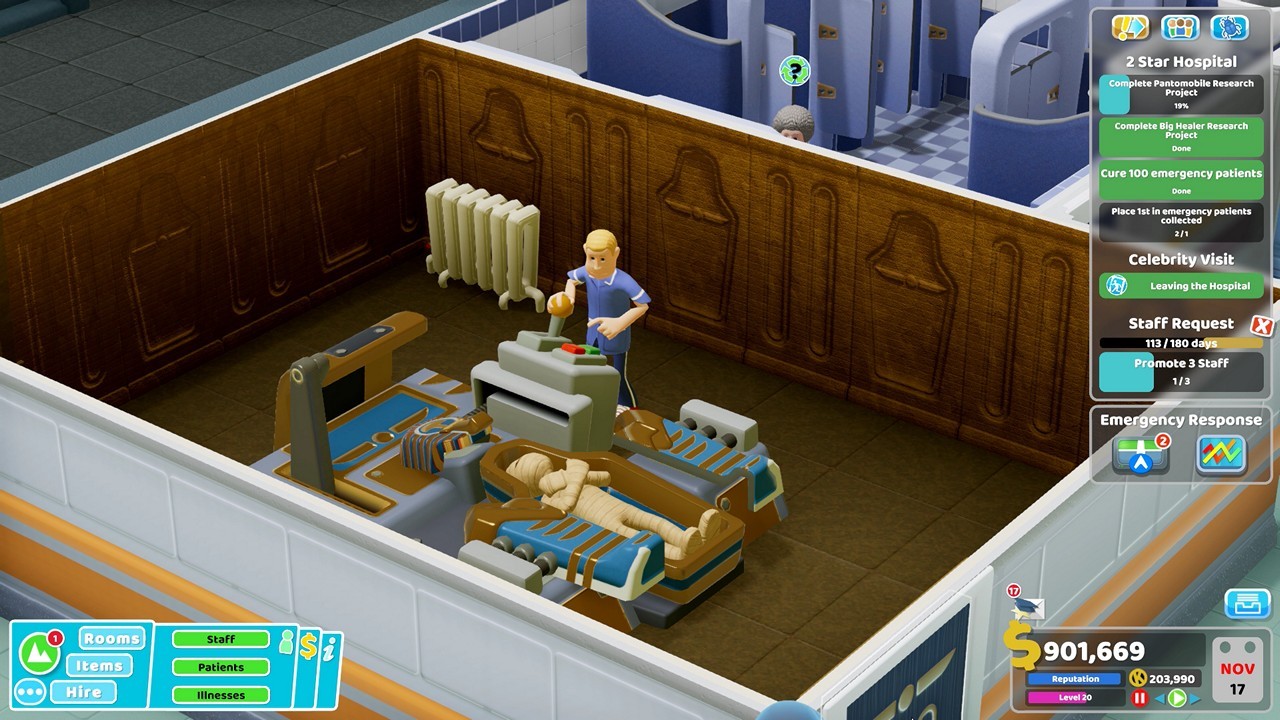 All six of these vehicles come with their perks and weaknesses, but I think the worst among them is the Pantomobile as it breaks after every trip, requiring you to do maintenance every time it delivers patients. It is also the slowest, yet still, being a literal clown car, it has the highest capacity. But when it comes to my favorite, it would have to be the Feather Balloon. There’s no real explanation why I like that particular vehicle, it’s just an ambulance carried by a rubber duck, but I’m sold.

Speaking of the design of each ambulance, they all fit within the wacky and ridiculous theme of Two Point Hospital, staying true to the overall design of the game. Even the most normal-looking Compliant Colin is an obvious homage to the three-wheeled blue car from Mr. Bean. 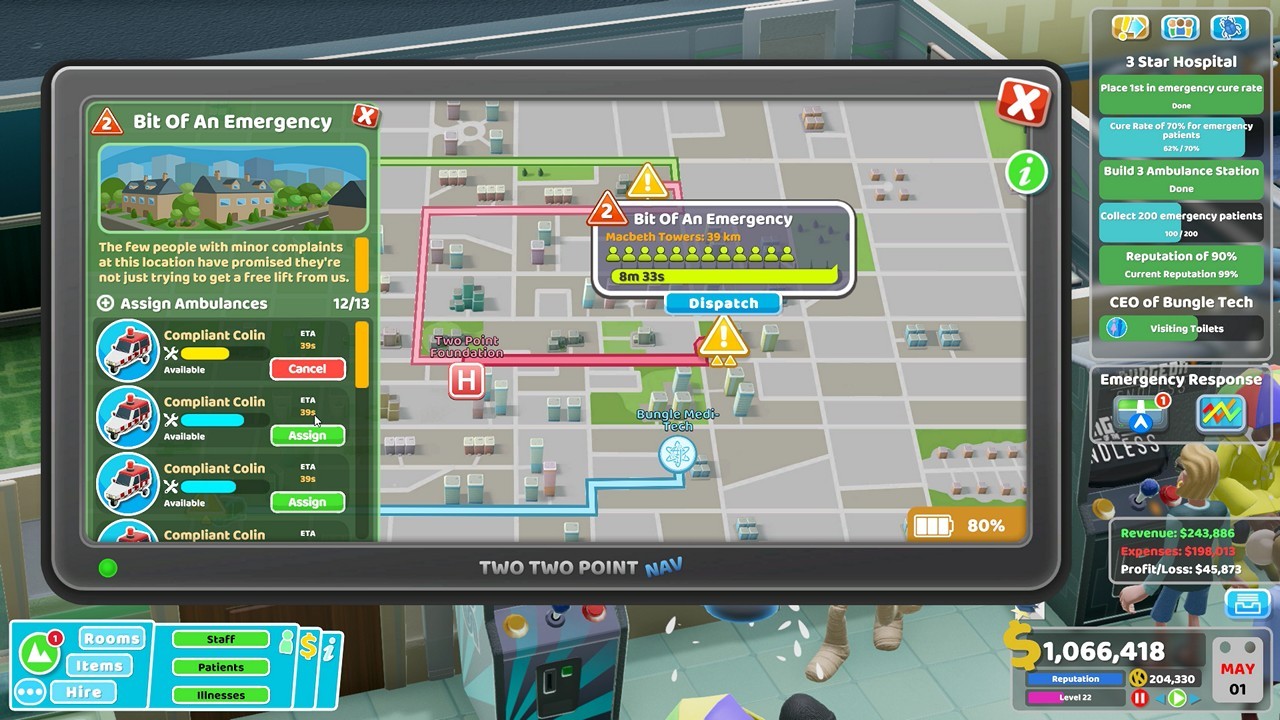 When it comes to maintenance of all vehicles, the reliable Gretchen Gearbox joins the staff as she handles all ambulance needs. And she can also train Janitors to upgrade vehicles, but she’s the only one capable of fixing these auto-mobiles. 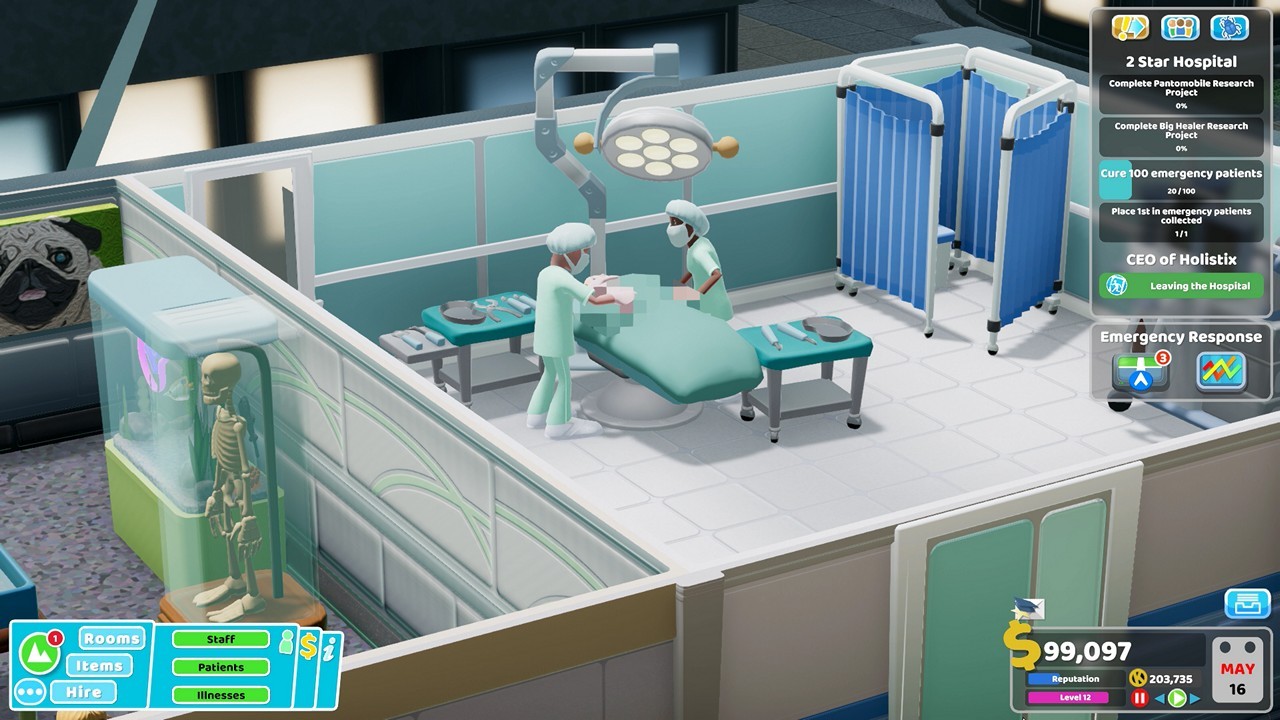 All ambulances can be acquired through research, with the Compliant Colin as your first ambulance. Once unlocked, you can place them in any available Ambulance Station, though do keep in mind that space management is still required when placing a vehicle in the Ambulance Station, so be smart about which Ambulance you’ll buy for your hospital. Only Doctors and Nurses with vehicle qualifications can operate an ambulance, so they can respond to an emergency.

Once you have qualified staff to drive an Ambulance, you can now dispatch them to emergency calls. What I find funny about the Ambulance mechanics is the competition as your rival hospitals also deploy their own emergency vehicles, trying to compete on which is the best healthcare establishment in the county. With little regard for human life, it’s a race on who can rack as many emergency patients as they can and be the number one in the charts. You can keep track of the emergencies and your standing through your Two Two Point Nav, but sending out one Doctor or Nurse to an emergency means you will miss one staff operating inside the hospital — so you have to consider hiring more staff with qualifications to keep things running in and out of the hospital. 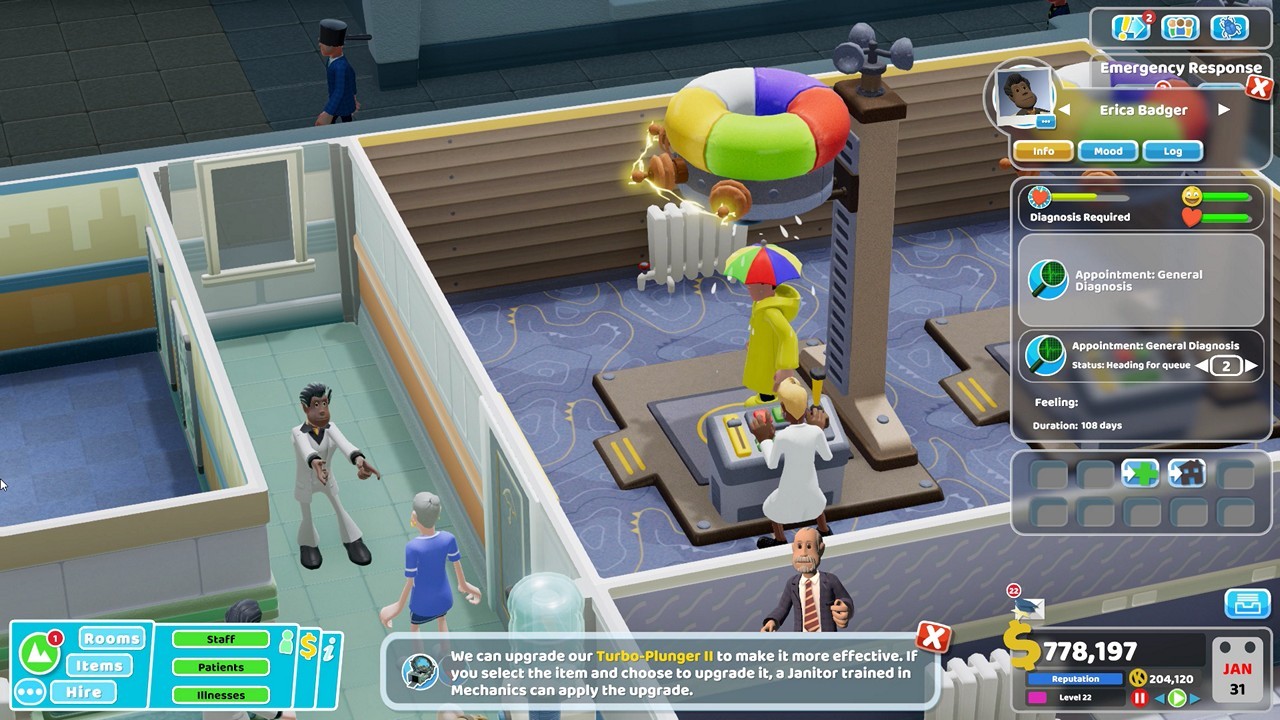 Along with the new three areas and the addition of Ambulance, Two Point Hospital: Speedy Recovery also added nineteen illnesses for you to cure, and six of them are fully visualized. With new illnesses to cure, there are also three new fully animated machines to help and relieve anyone of their sickness. Again, staying true to the witty humor of the game, the new illnesses are presented in humorous fashion. In this world, if you’re feeling Under the Weather, a small rain cloud will follow you around, and if you “accidentally” stuck your head inside a beehive, you might have contracted the Hive Mind disease. It may sound rude, but if there’s more to cure, it only means more money, putting more challenge into what facilities you’ll put inside while making the hospital pleasant to look at. 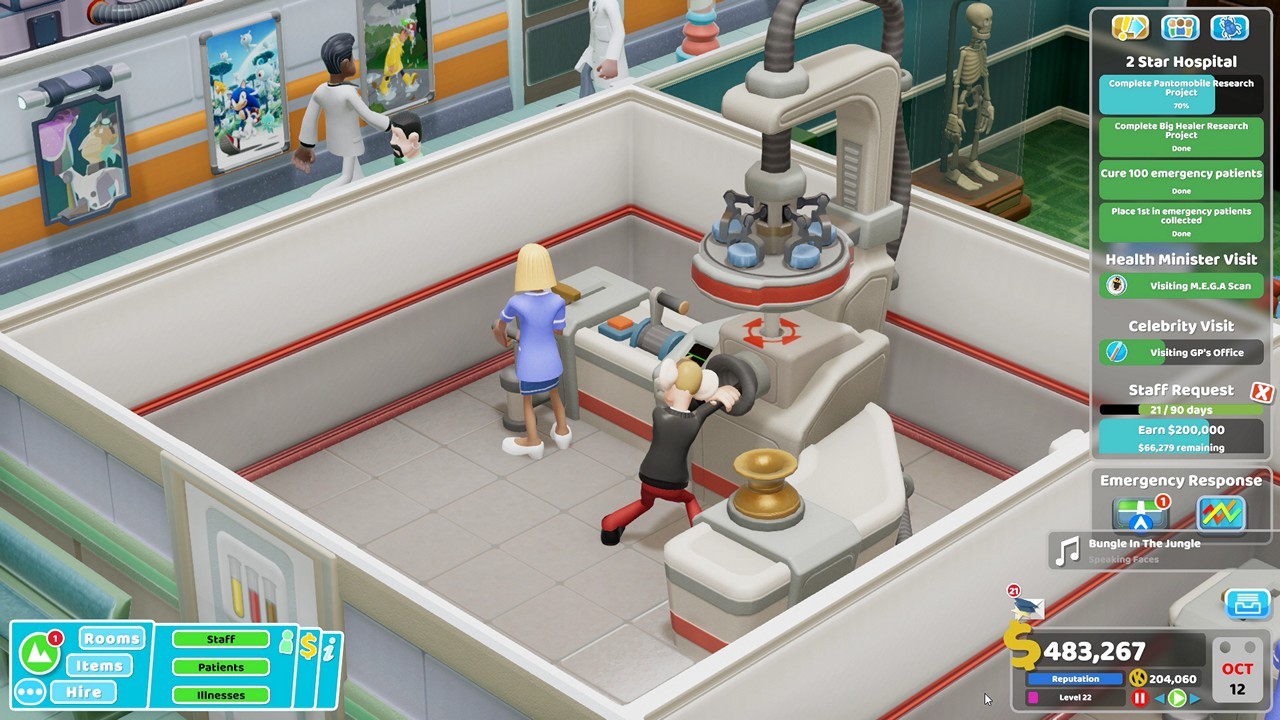 Despite being hectic with all of the additions of new illnesses and Ambulance mechanics Two Point Hospital: Speedy Recovery didn’t transform the base game experience. The emergency response with the Ambulance did add a feeling of urgency, since it’s a race to the leaderboards. but it has minimal impact on the overall gameplay. It feels so small you could just ignore it during the early parts of the level. The sad part is Ambulances are only available in new areas, which makes sense after all it’s a part of the DLC. Regardless, it is a nice addition so you won’t get bored when your hospital starts to play by itself.

Two Point Hospital: Speedy Recovery is a solid DLC for this game as it tries to innovate the gameplay by adding a new challenge in the game. Unfortunately, it didn’t manage to give the sense of urgency, and the challenge it was supposed to give feels minimal. Although the added micromanagement and the overall content including the new music tracks, levels, and visuals are all welcome addition to the base game.