Edge of Eternity Review | Fun despite the Flaws

A bit rough around the edges, but there's a lot of heart. 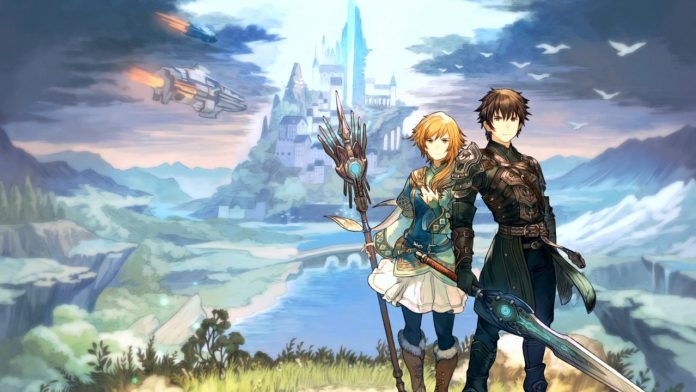 Edge of Eternity is a Kickstarter-funded project by French developer Midgar Studio, and it’s a work created by a small team who clearly loves JRPGs, made obvious by the tons of references the game throws at the player during the first few hours. But don’t get me wrong Edge of Eternity, is more than the references it makes from the past JRPGs that came before it, as it can stand on its own.

Unfortunately, it didn’t manage to fully realize its own potential. But it doesn’t mean that Edge of Eternity is a major flop, instead it is a rough gem that deserves to appreciated, despite its flaws.

War of the Worlds 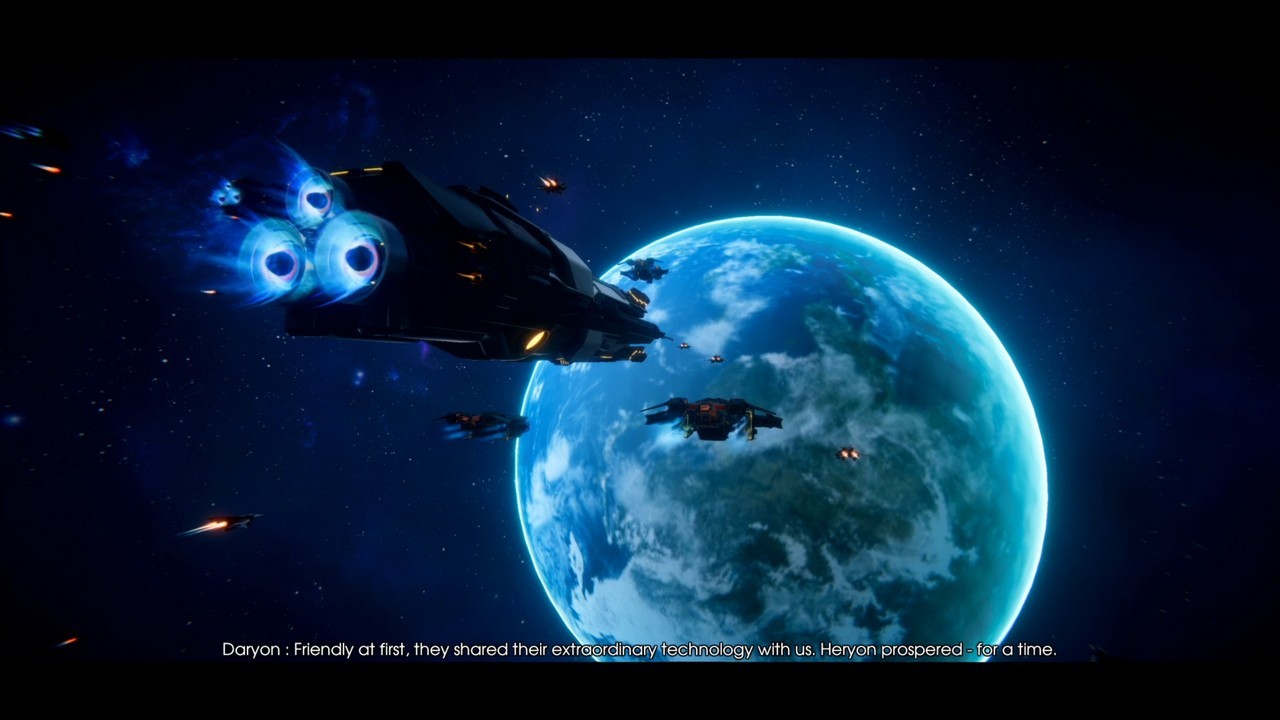 Edge of Eternity tells the tale of a war-torn world where the technologically advanced race of Archelites shared their technology with the local inhabitants of Heryon. But one day, the visitors from space decided to wage war, ending their once-friendly relationship with the locals, putting them in despair as they feel helpless against the invaders’ advanced weaponry. As if adding insult to injury, the Archelites released their biological weapon called the Corrosion, a plague that afflicts organic beings with rust, effectively turning them into metal-organic hybrids. inducing them with great pain that causes them to eventually lose their minds.

Thirty years have passed, and our protagonist, Daryon, a soldier who deserted his duty, receives a letter from his sister Selene, informing them that their mother has contracted the Corrosion. This sets the siblings on a journey to find a cure, but this journey will lead them to a grand quest that can affect the fate of the very world.

In hindsight, the story’s premise is quite solid, and if we do a checklist of the things that you’ll see in a JRPG, you’ll see it here. To make it short, we got our spiky-haired protagonist Daryon who wields an oversized two-handed sword along with his sister Selene who’s a Priestess who can learn complex and powerful spells. We also see in the world some Crystals which grants blessings that people worship, and there’s a cuddly cat mount called the Nekaroo. That makes it at least four for our list, and trust me, there are tons to write down about how Edge of Eternity’s story/character elements parallel with other JRPG.

Anyway, what caught my eye in the story is the sibling relationship of our two protagonists. It is just so refreshing to see a brother and sister in a JRPG, with the occasional teasing and bickering, but seeing deep down that they care for each other, and what motivates them in this journey is to find the cure for their Ma (at first at least). It’s not exactly new, but I don’t see this kind of bond too often in an RPG. Admittedly, I had a surprising fondness for their brother and sister dynamic as the comical scenes show that Daryon just misses his family a lot, and boy you’ll be chuckling if you know the tons of callbacks that these lines are referring to. But when it comes to the other characters, I can’t seem to care much as they just feel so disconnected from our protagonists; as if they’re just included just for the sake of inclusion in a tragic backstory. 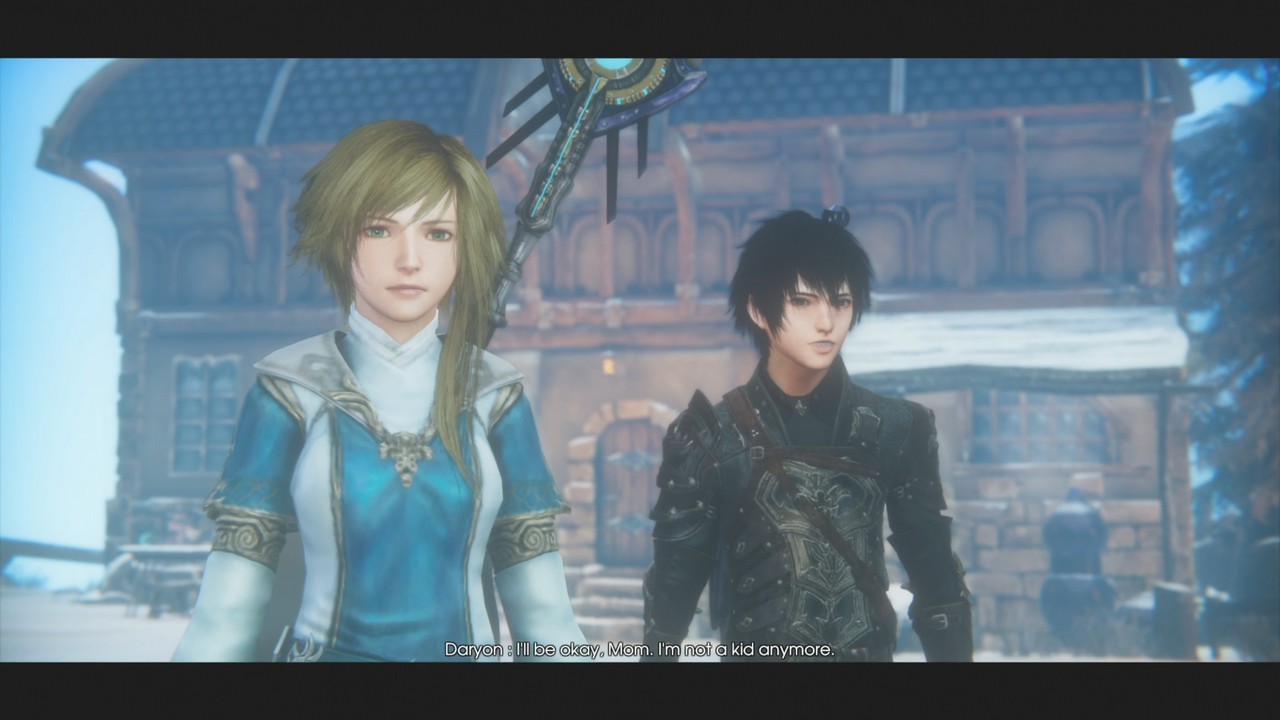 What confuses me though is the fact that humans haven’t declined yet. Especially when you consider that the first attack came thirty years ago and by Daryon’s words they were powerless against the Archelites, not to mention the Corrosion plague has no known cure. Their present-day looks as if the war is only happening for about two or three years since there are still small towns and cities around the continent that look fine. It doesn’t ruin teh game, but if I think about it, a thirty-year war is a dang long time. There is just no feeling of tension regarding how dire the world’s state is since there is an all-out war of the world.

Another nitpick is that there are elements in the narrative that Edge of Eternity tries to introduce but can seem needless. It just has a huge world to explore, and I just wished that they focused on one key element in the narrative and build upon it. The narrative did eventually sort itself, but people might may find the build up to be too slow to actually care when things get interesting.

Land of Fantasy covered in Rust 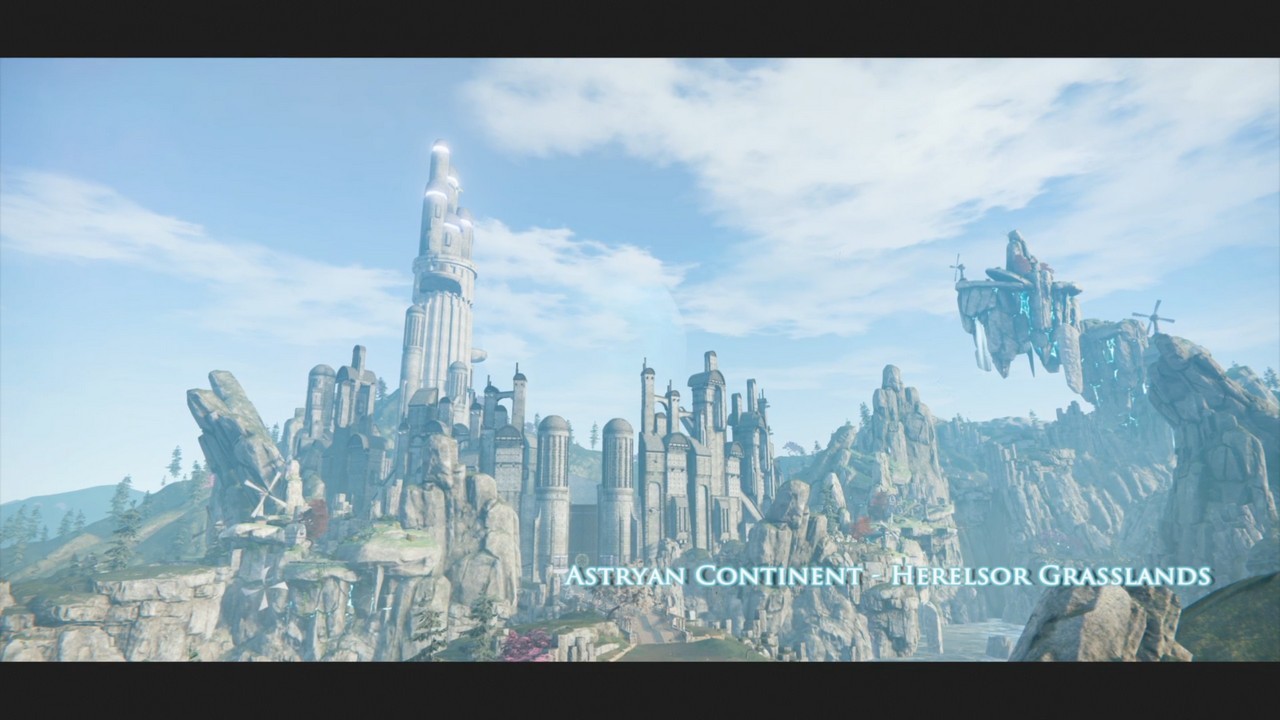 When I said there’s a huge world to explore, it’s not a joke because Edge of Eternity’s world is massive. The landscape is impressive enough that it seems like it was developed by a large studio instead of a small team. Every character model looks great, and you can definitely tell the inspiration behind the designs. For me, when I had my first glance at the characters, they gave me the feel of MMOs such Phantasy Star and Cabal online for some reason. Maybe because of the spaceship from the opening scene and the forest from Cabal that I frequently grinded during my MMORPG phase.

The world looks good, but traversing this vast fantasy land can be a bit monotonous at times, with enemies melding in the environment (they could have done better to make them noticeable). Maybe they were looking for an immersive experience since an immersive mode is included in the settings, but it would be helpful if the text in the UI is not too small.

Going into the game’s sound design, they did a good job with the voice acting, especially with Selene’s dialogue. The game’s soundtrack is also fairly good, but not as grand to leave me searching for the OST on Spotify or YouTube. Still, the great thing about the music is that it doesn’t get old even after long hours of playing. 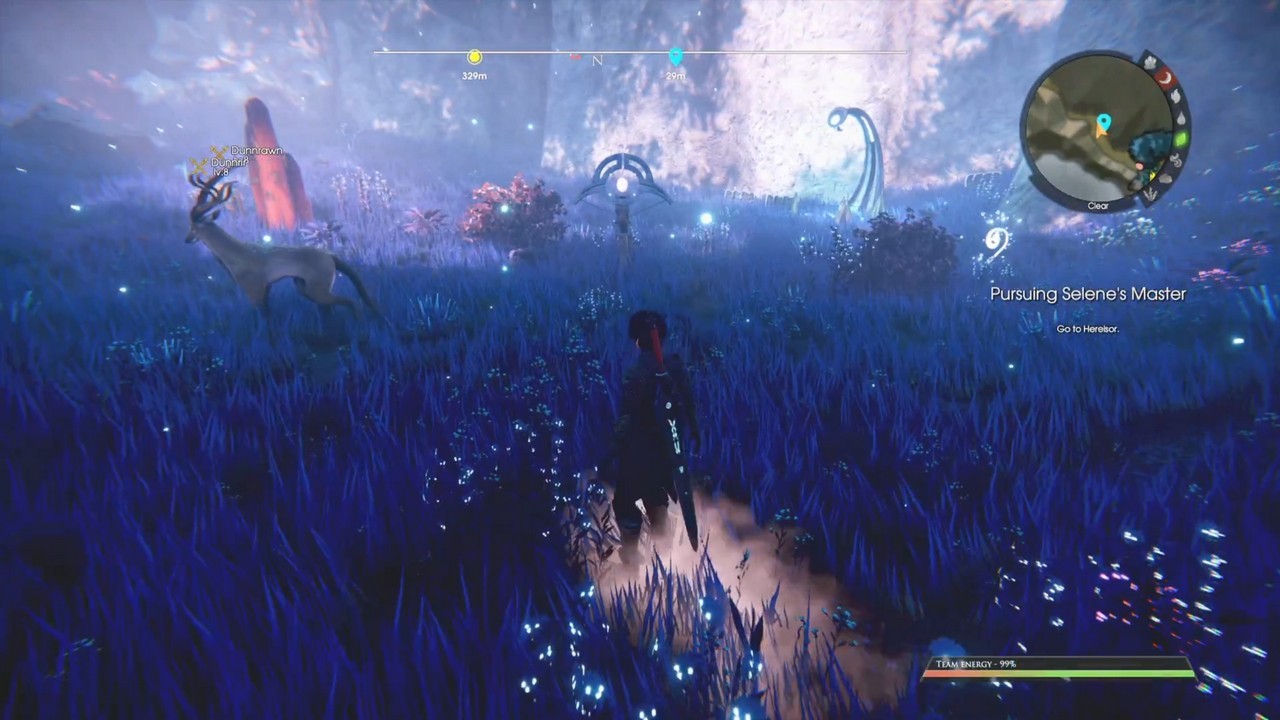 If there’s one thing I want to improve, that would be the awkward character motion as they feel too stiff, and their facial expression looks weird at times. I would dare say the motion is comparable to FFX or FFX2. But if I’m gonna make a comparison, I would go with the combat system as it really reminds me of an RPG that I haven’t played for a long time. 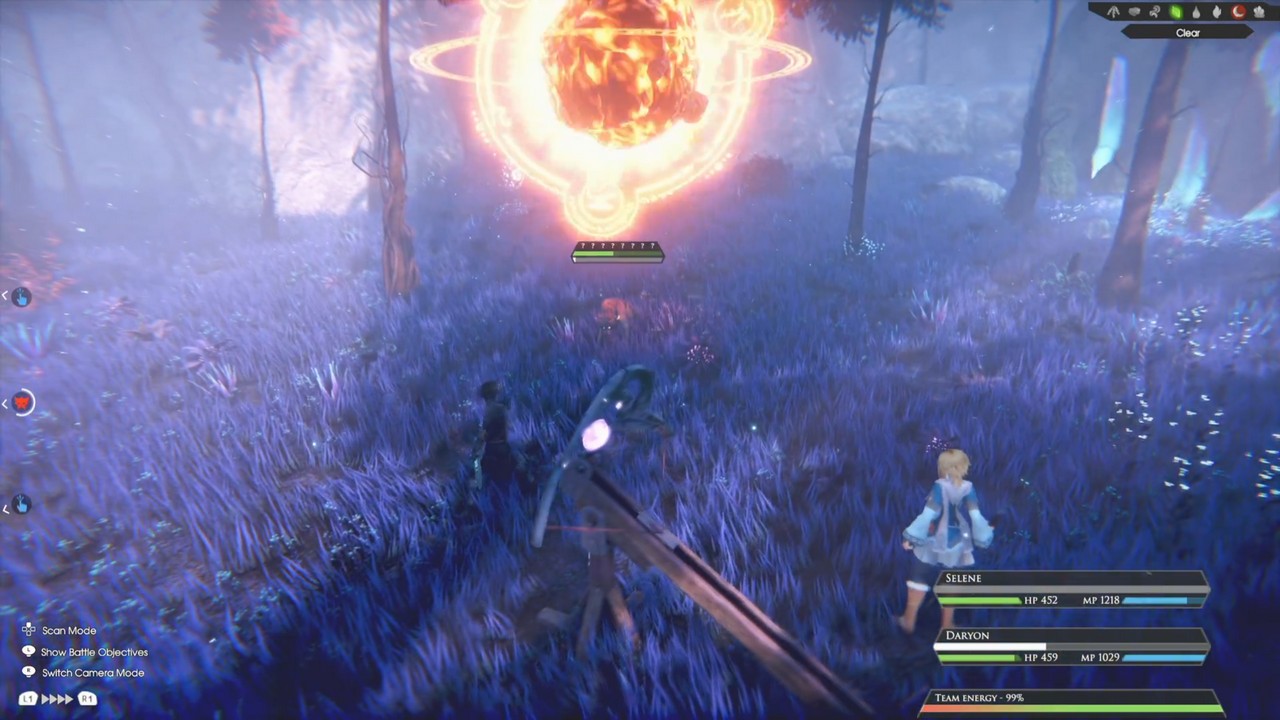 It’s fun to see hex grids again in an RPG because the last time I saw one was from Wild Arms. In Edge of Eternity, the combat uses a mixed turn-based action time battle system where you move your characters from grid to grid to attack or cast spells. You can also interact with various objects in the arena such as weapons or crystals and use them to your advantage. I only find the casting time to be quite tedious as special abilities take time to finish and can be interrupted but all in all. Though I just consider positioning as another layer of challenge in the combat and be wise where I stand.

There are also other extra challenges in every encounter that yields extra rewards once conditions are met, adding more goals for you to accomplish in every encounter. There are lots of things to like about this battle system as it is easy to understand while being challenging at times, but again unfortunately there are issues like the small text in the UI and the camera not being cooperative by either being too close or too far, making it a problem at times.

Edge of Eternity’s shortcomings is understandable considering it was made by a small team, but it seems that the team just lacked the resources that it needed to fully realize its vision. It could’ve also had a stronger story as trying to fit in tons of story ideas in a single narrative can lead to the tale being not as engaging, thus weakening the impression it leaves. Although, what deserves praising is the game’s overall design which you can compare to other RPGs, that is if you don’t mind the awkward character motion and some the bugs that remain in-game.

Even with some of its issues, Edge of Eternity has engaging gameplay, loveable protagonists, and lots of hear, making it a game that’s flawed yet fun. If you’re a JRPG fan looking for something differnent, you can consider playing the game for at least one playthrough, and I hope that Midgar Studio’s future project can learn from this game as I’m interested in seeing what they have lined up next.

Edge of Eternity Review | Fun despite the FlawsEdge of Eternity is a passion project by those people who really love JRPGs putting together. While it is a bit rough around the edges, there are great ideas here and some things to love, including a fair battle system and beautiful crafted world.