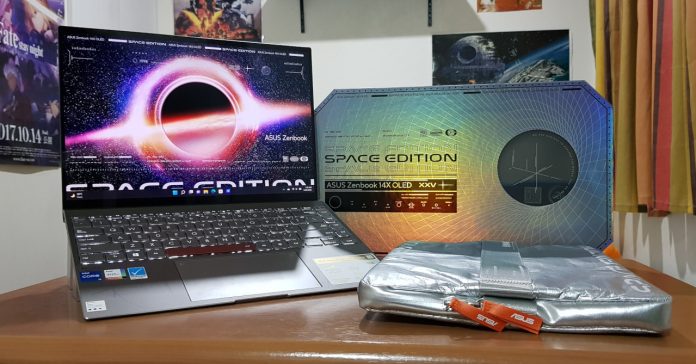 Aside from having a different processor and a couple of other updates, the highlight feature of this Space Edition laptop is its out-of-this-world design. Inspired by the ASUS P6100 which was chosen for the MIR Space Station, this special edition Zenbook 14X OLED packs spaceship-style design elements, as well as an eye-catching 3.5-inch OLED screen on the cover. 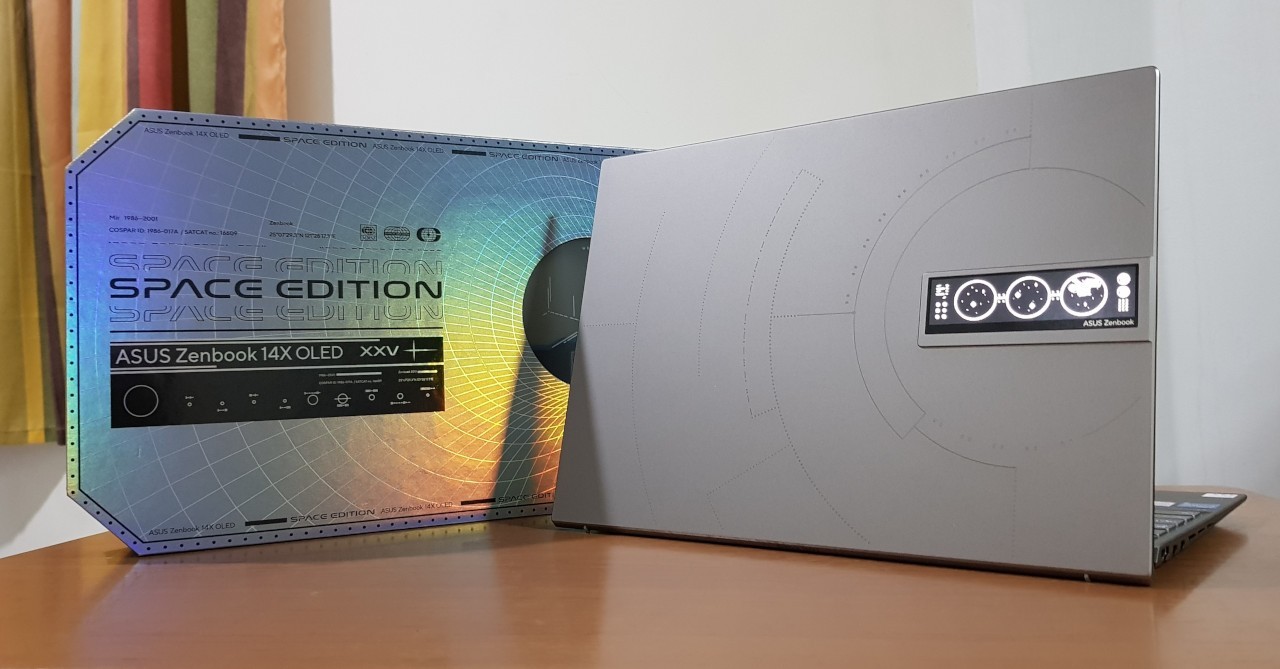 The laptop’s design is easily the main attraction, but looks aren’t everything; a laptop must also perform well. So, does this Space Edition Zenbook perform just as great as it looks? Find out here in our review. 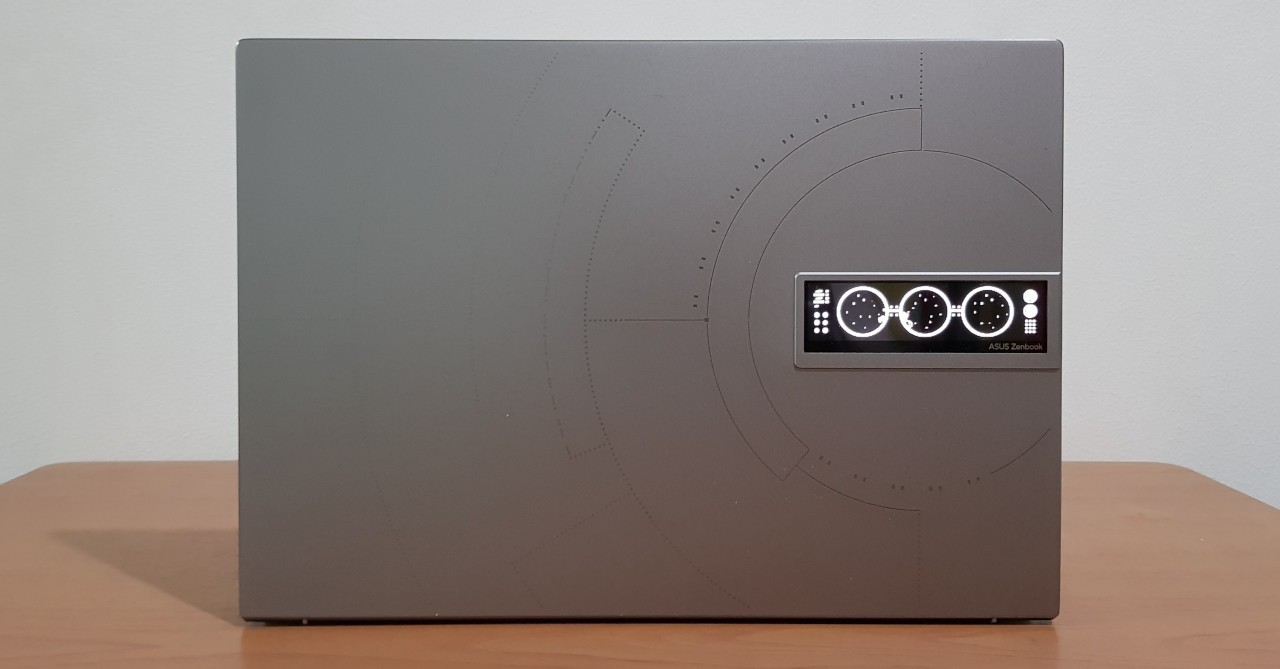 To start off, let’s take a look at the laptop’s design. While it shares the same chassis as the previous Zenbook 14X OLED we reviewed, this Space Edition notebook features design elements that are seemingly inspired by spaceships. But instead of real-world spaceships, the design reminds us more of sci-fi movies like 2001: A Space Odyssey or Interstellar.

That’s not a knock on the laptop though as we think it’s quite a looker, and it will definitely stand out in a sea of other Windows laptop. This is thanks not only to its space gray (or Zero-G Titanium) color and design elements, but also because of its cover display. 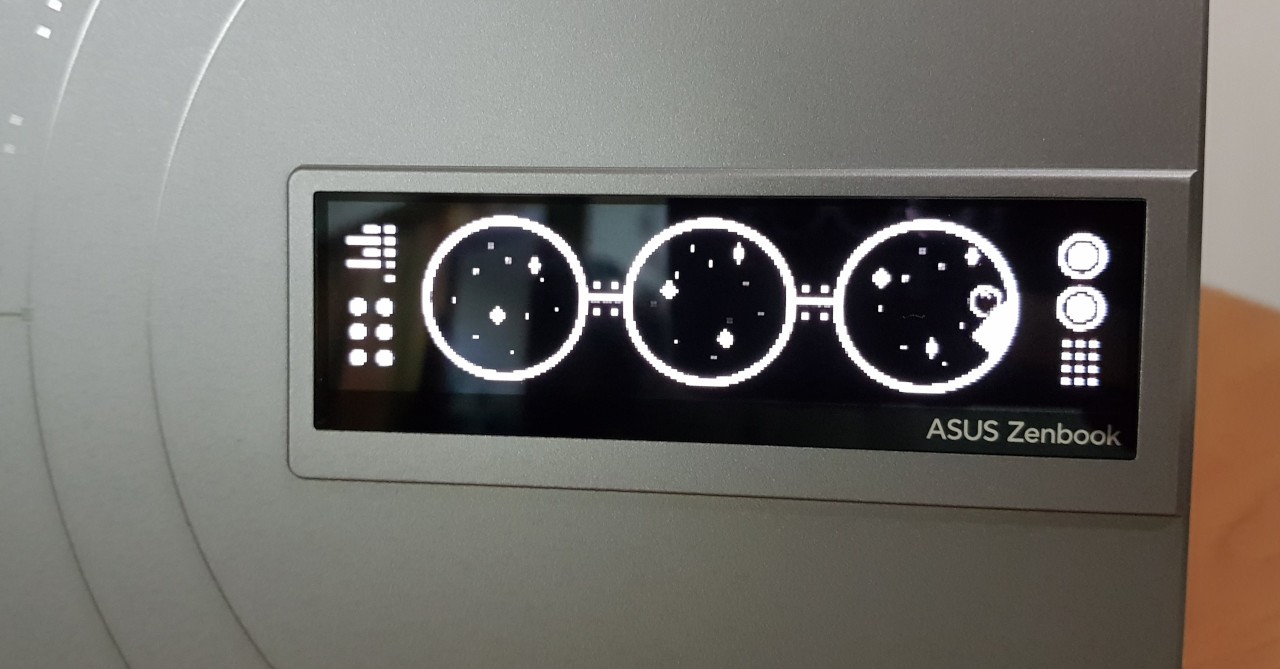 In place of the Zenbook logo, the Space Edition 14X features a 3.5-inch black-and-white OLED cover display. By default, the screen displays a space-themed animation loop, and you can change this in the MyASUS app. You can set it to display custom animations, the time and date, or even your name with a QR code for your email. In a way, it’s kind of like the AniMe Matrix LED on the Zephyrus G14, but smaller. 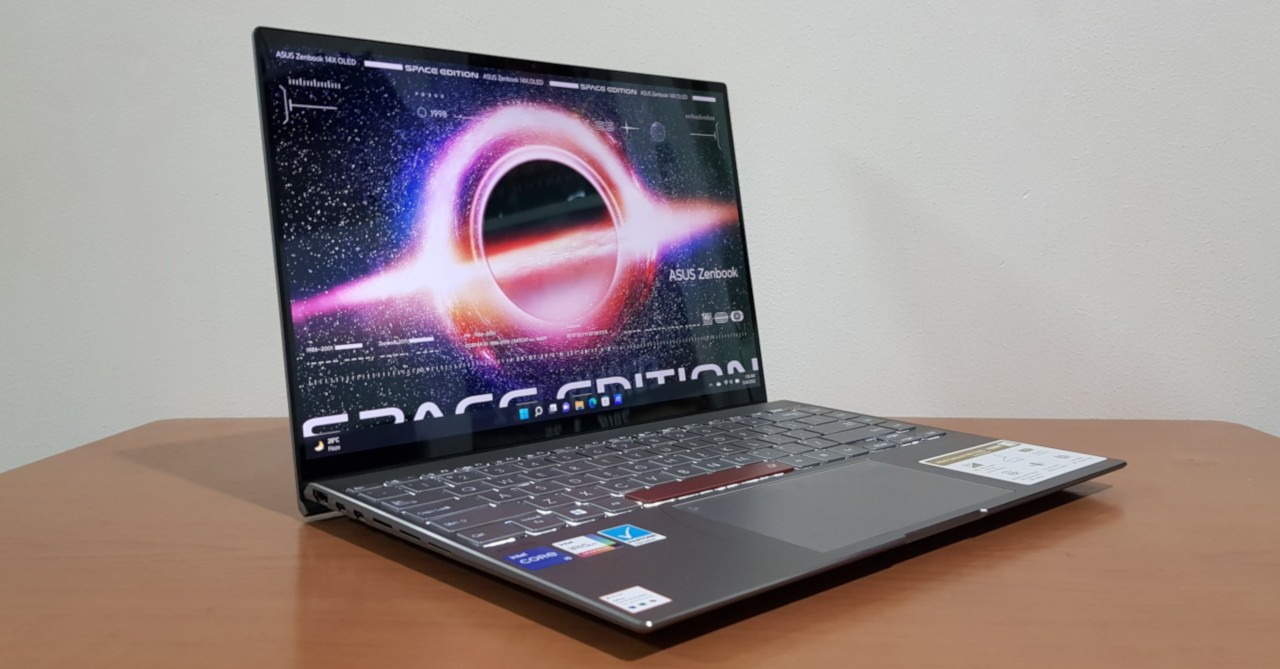 Moving to the inside, this Zenbook also features spaceship-inspired lines and design elements. Plus, it comes pre-loaded with Space Edition wallpapers so you can match your home screen with the laptop’s overall look.

In spite of the additional cover display and eye-catching design, this Zenbook doesn’t compromise when it comes to durability and portability. According to ASUS, this laptop is space-grade durability compliant, meaning it should be a sturdy laptop. On top of this, the Zenbook Space Edition did not add much in terms of weight and thickness, even with the included cover display. This makes it easy to bring with you everywhere. 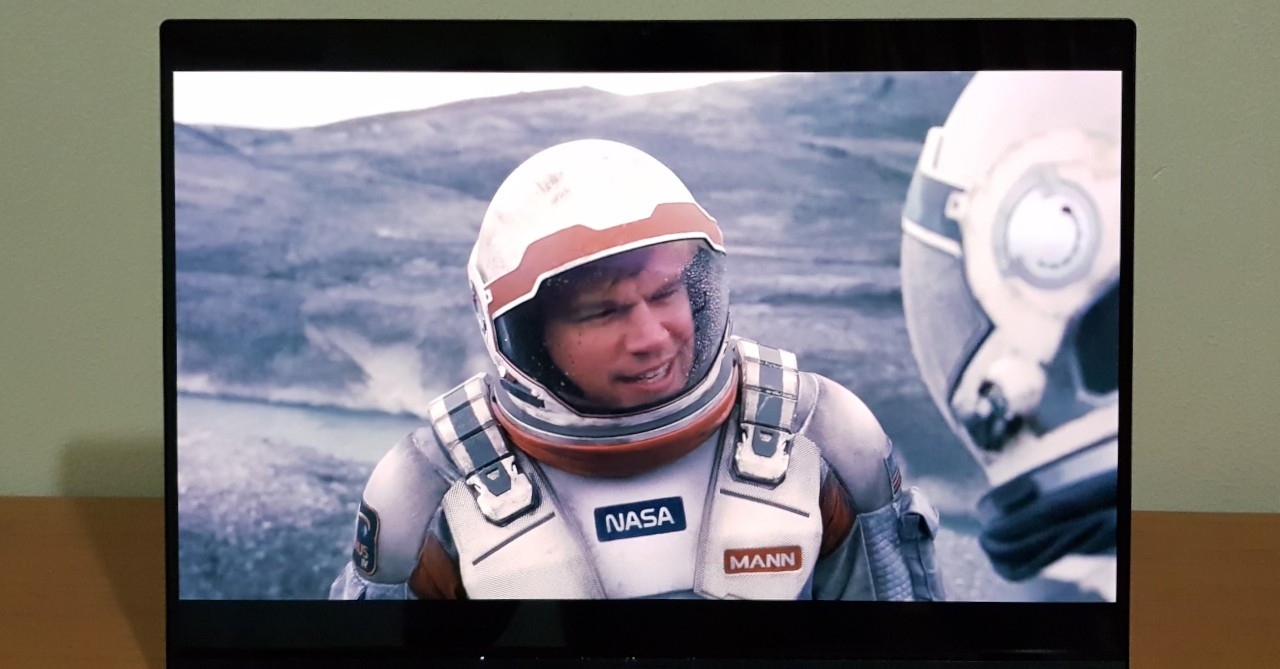 The Zenbook 14X Space Edition has a 14-inch OLED touch display with a 2880×1800 resolution and a 90Hz refresh rate. Thanks to the high resolution and vibrant colors of the OLED screen, the Space Edition Zenbook is a great partner for binge-watching movies/shows (if you’re fine with watching on a laptop that is).

One thing to note is that the laptop has a 16:10 aspect ratio, meaning it’s taller than typical laptops so you get bigger black bars when watching widescreen movies/shows. Though this didn’t bother us as the OLED screen has deep blacks, so letterboxing isn’t distracting. 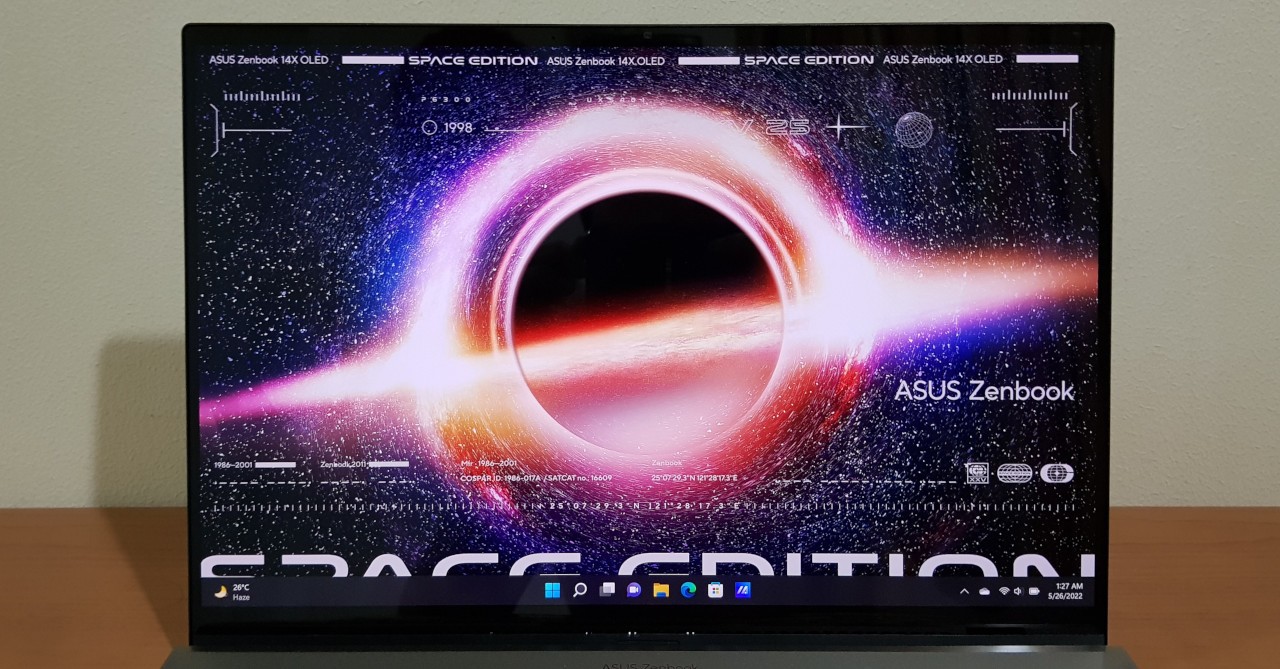 The taller aspect ratio does make it much better for productivity as the added screen real estate is great when working on Word documents or spreadsheets. It’s even great for your usual web browsing as well as you get to see more of a web page on the screen. 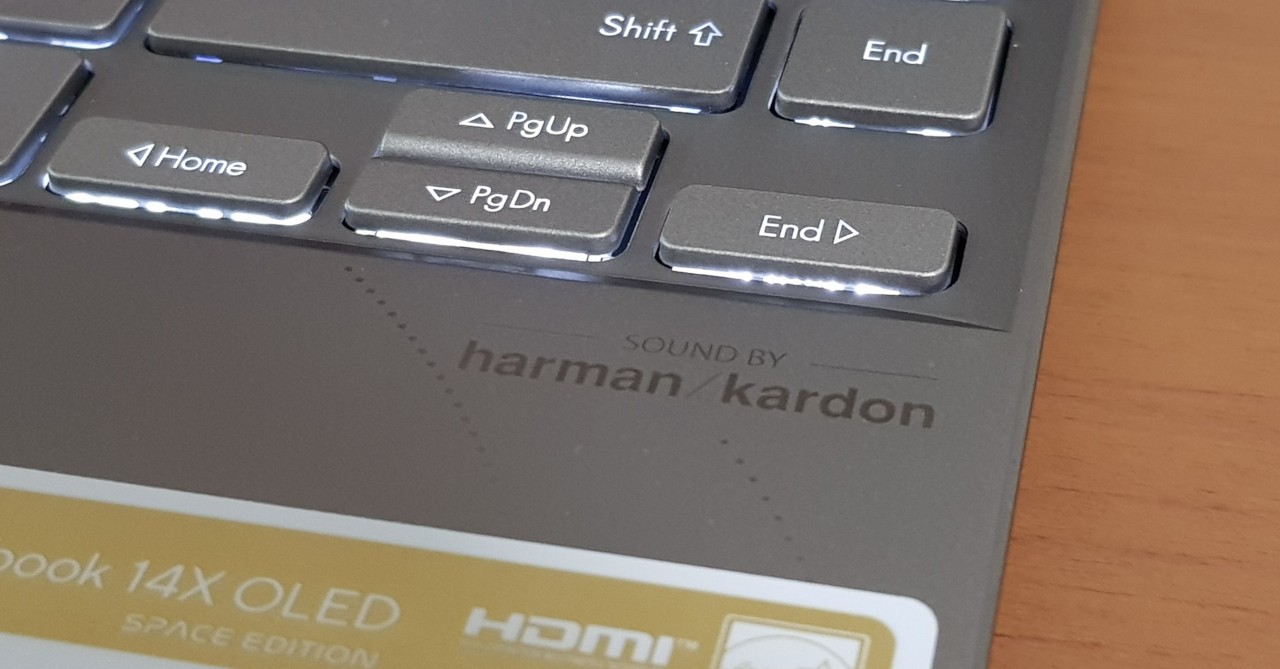 This Space Edition Zenbook features onboard speakers that are tuned by Harman Kardon. While Zenbooks in the past don’t get all that loud, the newer models have much better volume — the Space Edition is no exception.

While headphones or external speakers are still recommended for watching movies or listening to music, the laptop’s speakers output good audio and can get fairly loud. It won’t fill the room sure, but the speakers are definitely better than other ultrabooks. 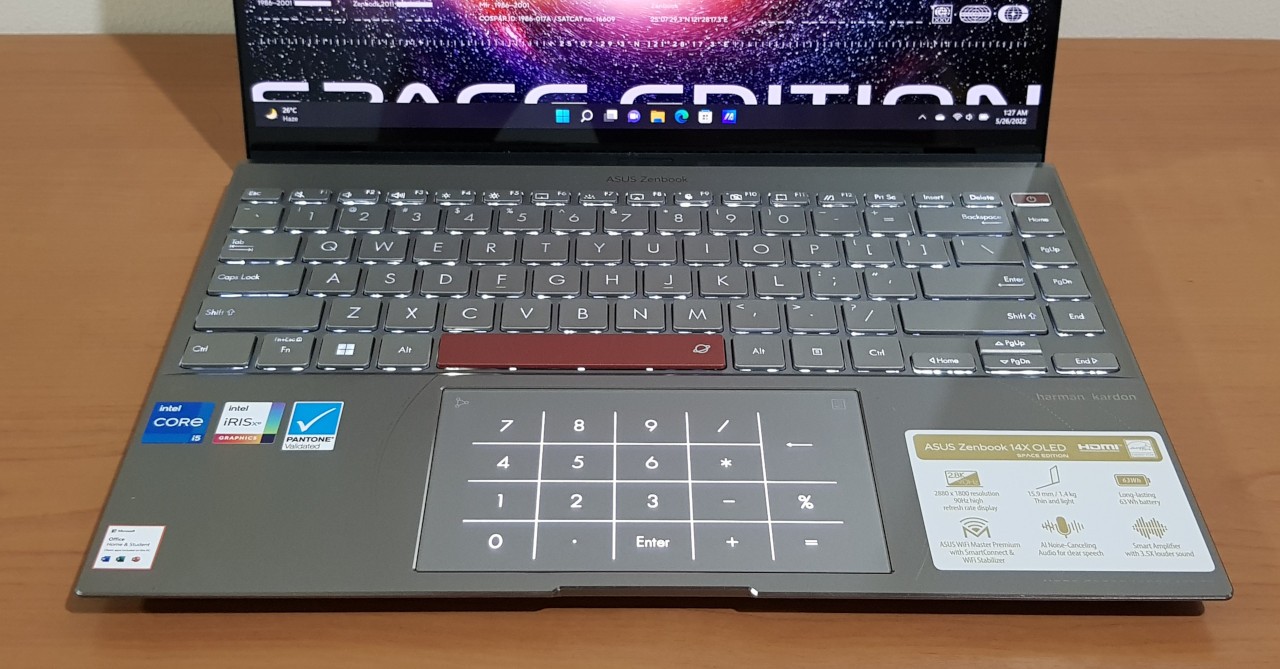 The Space Edition’s keyboard feels great to type on as the keys are spaced well and aren’t too small for an ultraportable laptop. This Zenbook also features ASUS’ signature NumberPad 2.0 on the trackpad which you can turn on or off, depending on if you need to type some numbers. Speaking of the trackpad, I found it to be responsive and of a good size. I still prefer having a mouse, but the trackpad combined with the touch display meant I didn’t have problems using this without a mouse in hand. 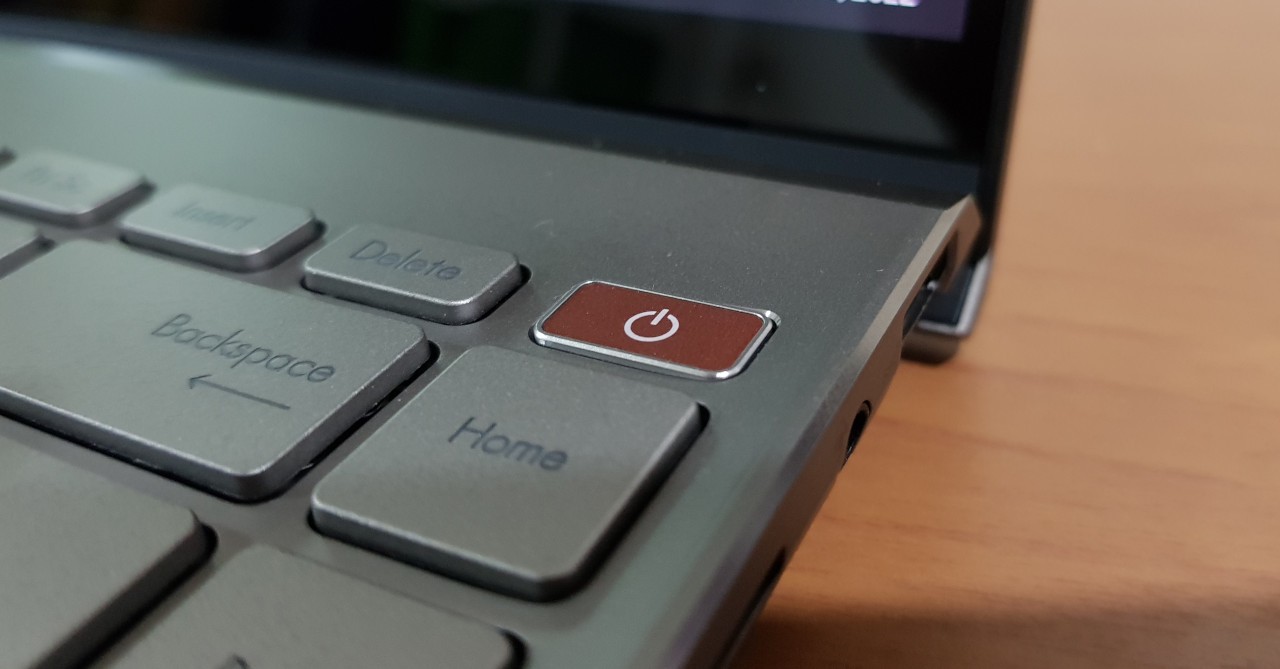 Another good thing about the Zenbook Space Edition is the power button which packs a built-in fingerprint scanner. What’s great is that it sits almost flush to the chassis, meaning you won’t be able to accidentally press it while typing (which has happened in some previous laptops that we reviewed). 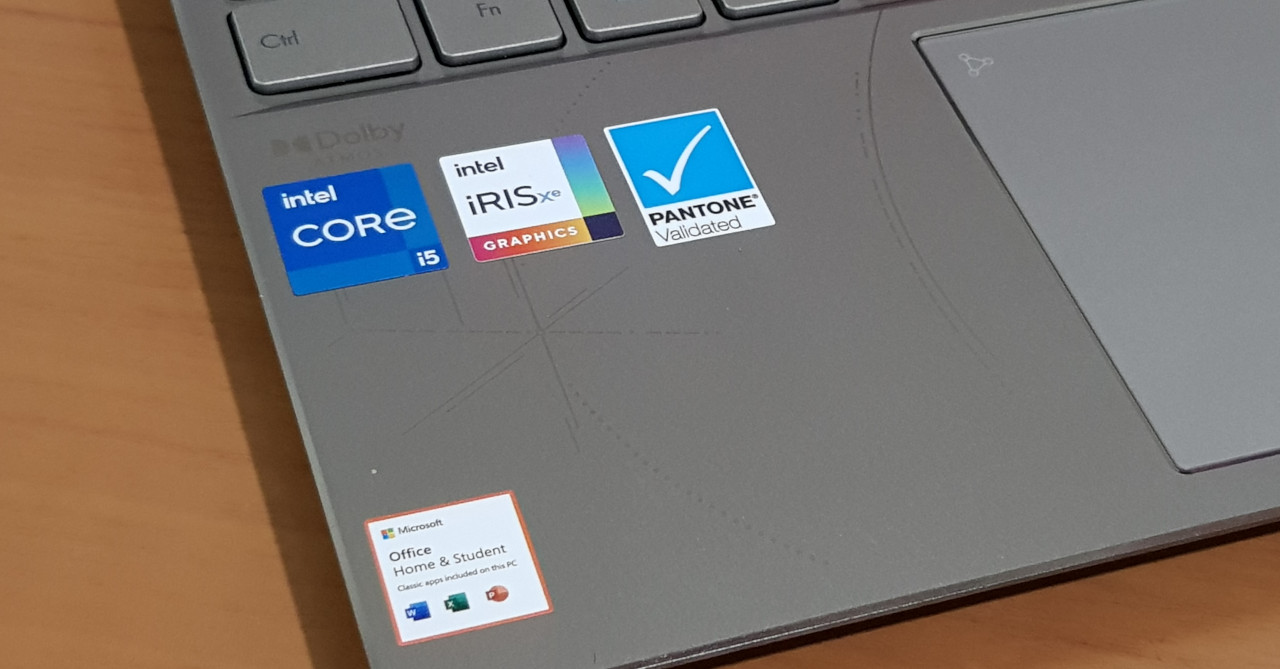 Powering the Zenbook 14X OLED Space Edition is an Intel Core i5-12500H with Intel Iris Xe Graphics and 16GB of RAM. What’s interesting about the choice of CPU is that ASUS was able to put an Intel 12th Gen H-series processor (the higher performance line) instead of a U-series CPU. Typically, H-series CPUs are reserved for larger gaming/productivity laptops.

Given this, we expected the CPU to perform well given our previous experience with Intel’s 12th Gen mobile processors. And in our test, it did not disappoint, even for light gaming. 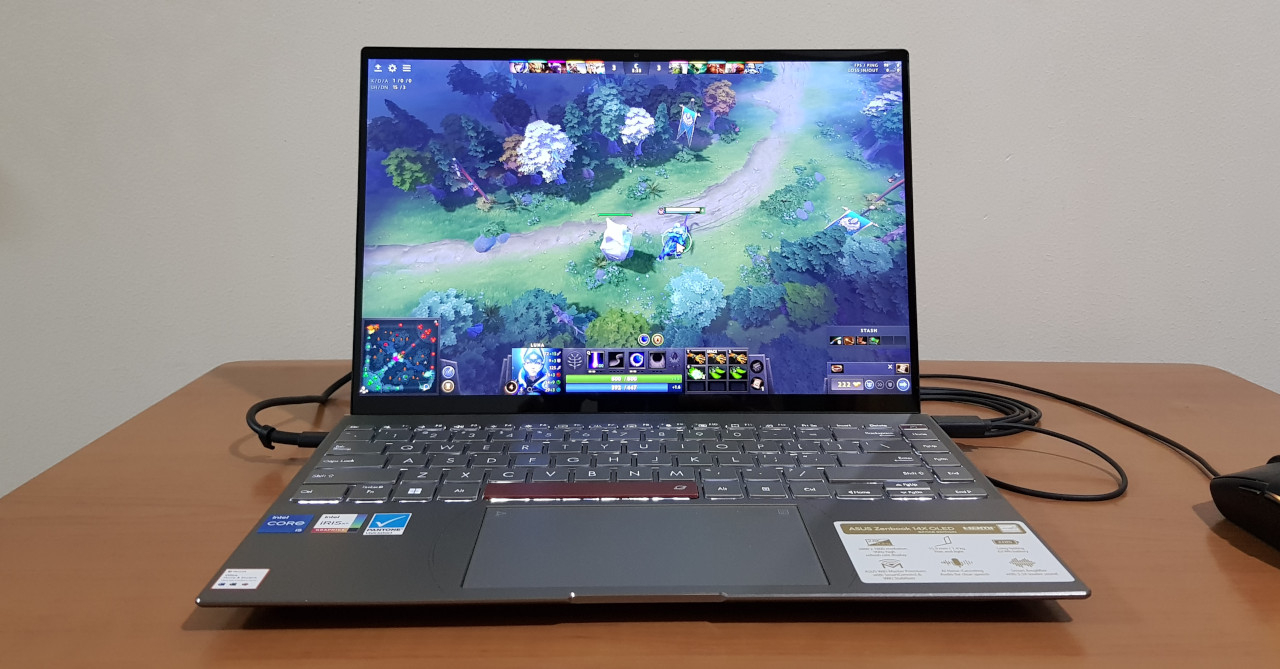 While it’s not a gaming laptop, the Space Edition Zenbook proved to be capable enough for playing esports titles and other less hardware-intensive games.

For daily use and for productivity, the Space Edition ASUS laptop did not disappoint. For office apps and for some photo editing or light video work, the Zenbook 14X OLED Space Edition proved to be a capable device. 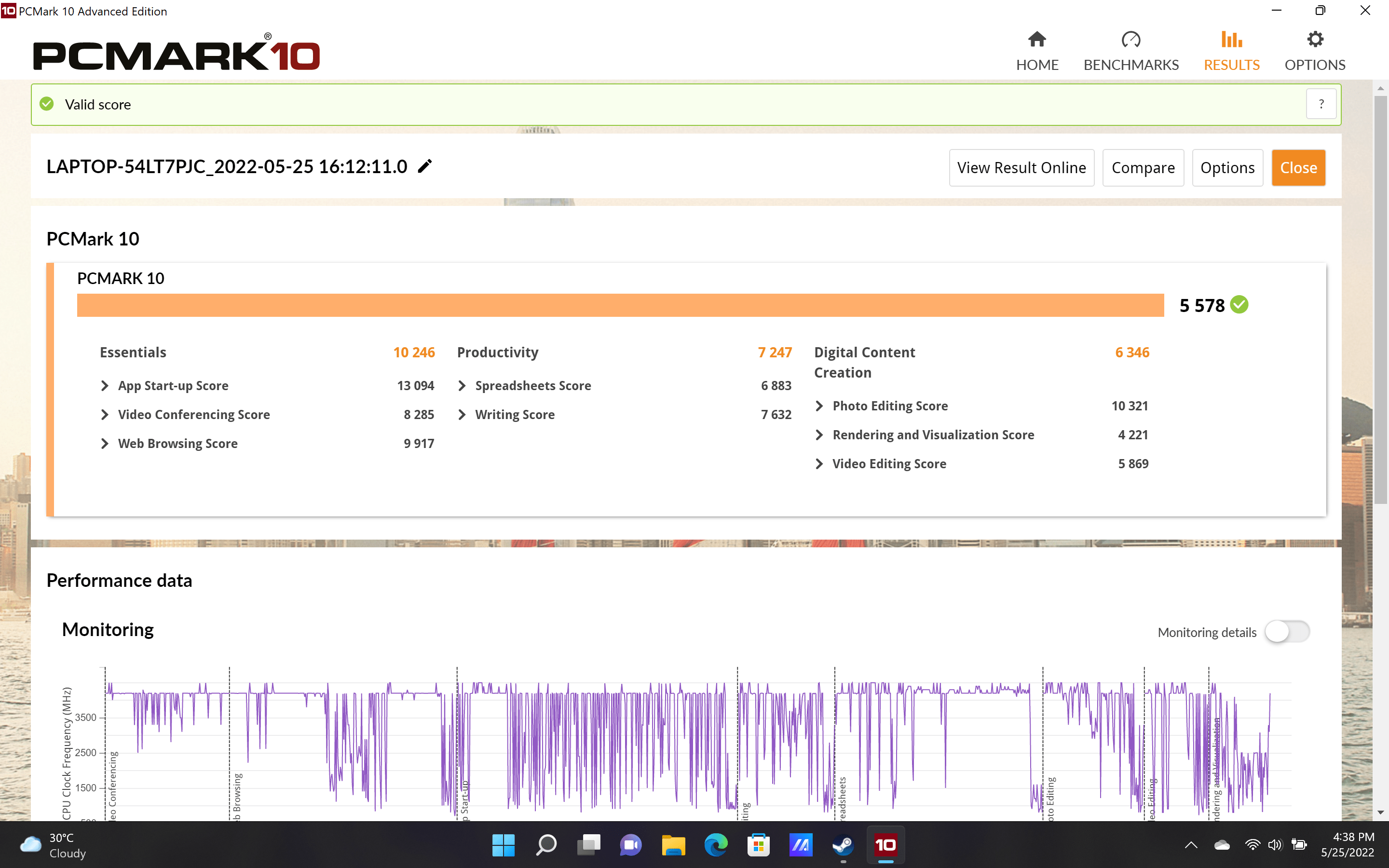 The PCMark10 benchmark also confirmed this as it got a pretty good overall score that’s comparable to the previous Zenbook 14X OLED model that we reviewed.

Performance aside, we found the Space Edition’s cover display to be a nice addition, especially as we were able to edit what can be shown on it. For more flair while keeping things professional, we liked the option to put text and a background on it. Though you can also opt to turn it off if you prefer to. 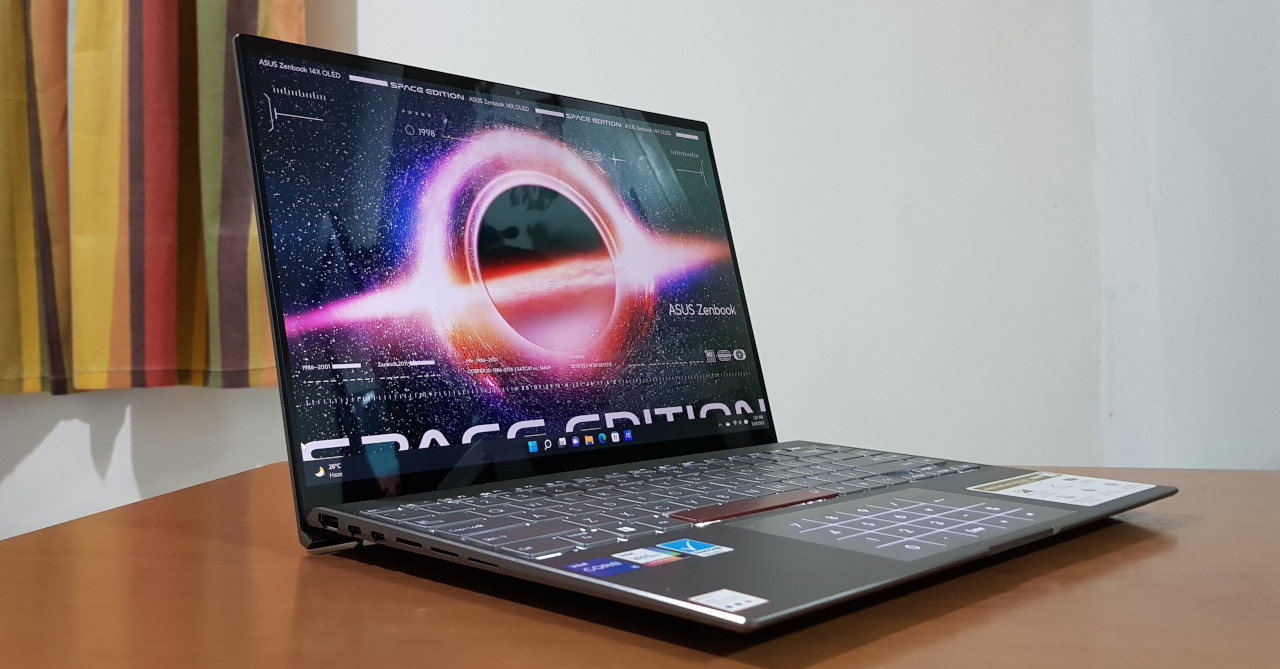 So, how does the cover display affect battery life? Not much as after running a 2 and 1/2 hour movie at 50% brightness and volume, the laptop still had 70% remaining, that’s with the cover display on. This is the same result as the previous Zenbook 14X OLED which is still an impressive result for a laptop with a touch screen.

Another cool thing worth mentioning about the Space Edition is that it comes with a webcam cover. But unlike other laptop with a physical shutter, this Zenbook has an electronic webcam shutter which you can activate by pressing a function key. It doesn’t really differ much from a physical shutter in function, but it is a cool addition that makes the laptop feel more futuristic.

In our reviews, we usually focus only on the laptop itself, but we’re making an exception for this as the bonus accessories are quite interesting. 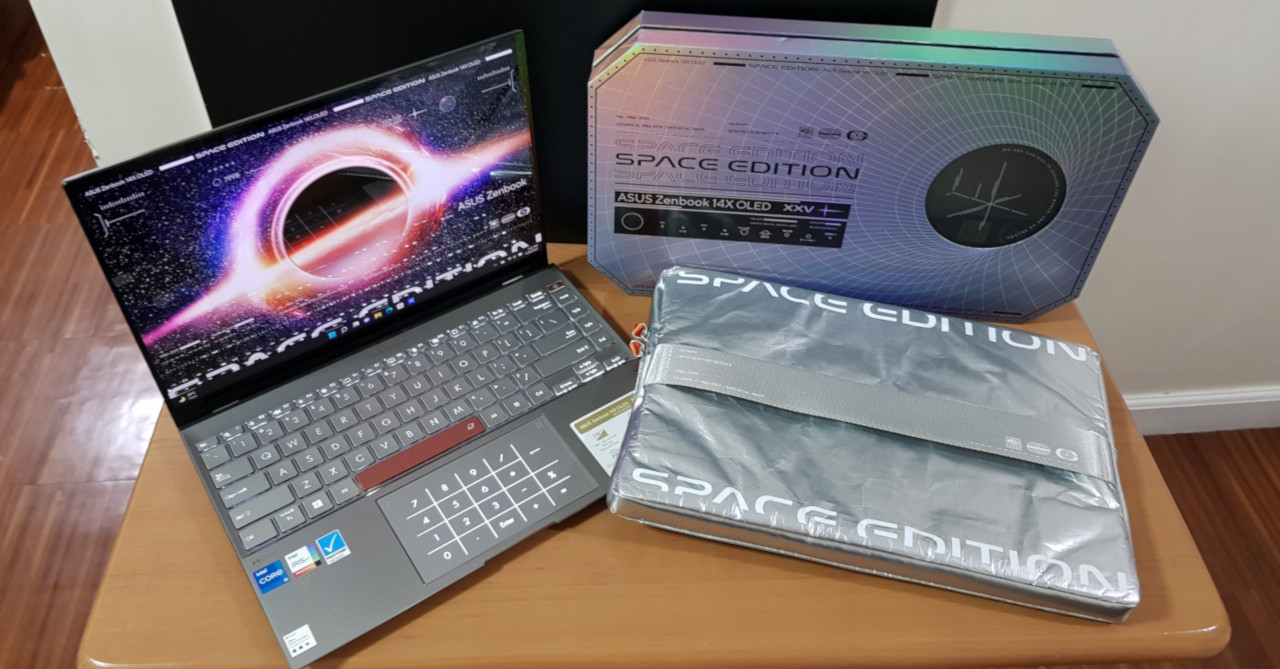 Aside from having an eye-catching box, the Space Edition Zenbook also comes with a space-inspired padded laptop sleeve. If you like all things space, you’ll definitely love the included sleeve with its silver color and orange accents. It actually reminds us of NASA fashion collabs which have become quite popular in the recent years.

Aside from the sleeve, another cool thing about the package is the included stand. When you open the box, you’ll see a case for the laptop’s charger, and it doubles as a nifty stand.

There are also other cool stuff inside the box, and if you’re interested to see more of it, you can check out our unboxing video of the Space Edition Zenbook. 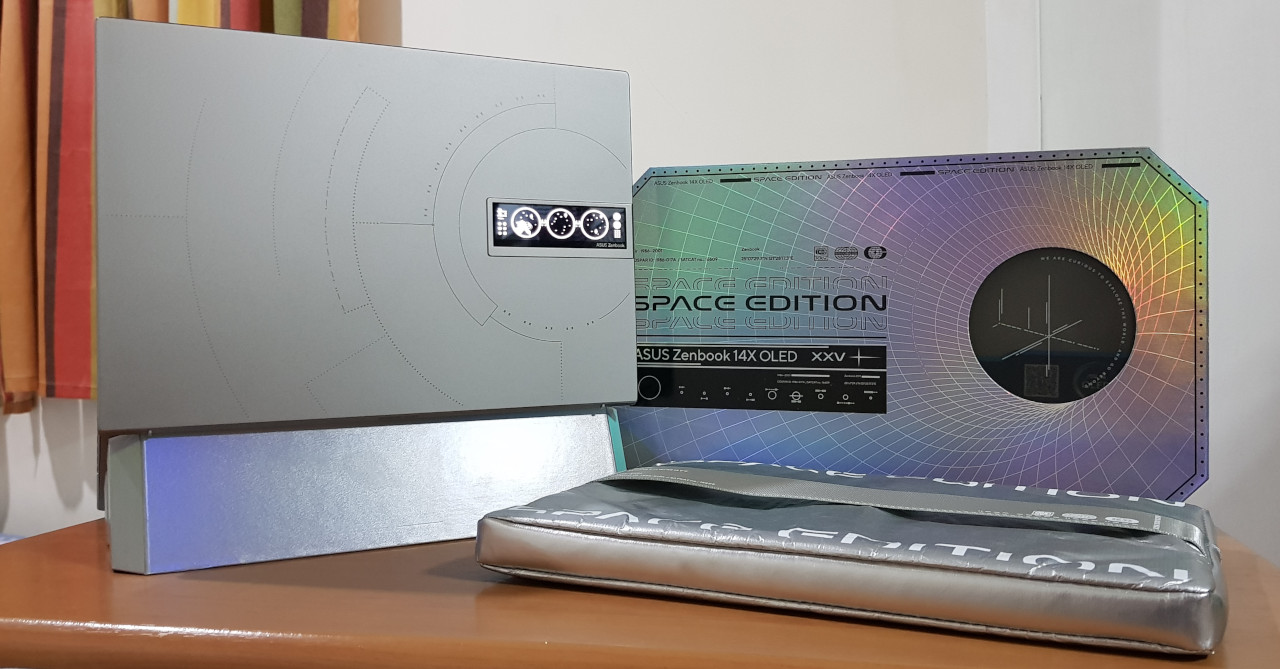 The Zenbook 14X OLED Space Edition is an eye-catching laptop that we recommend not only for space lovers, but also for users in the market for a new ultraportable productivity laptop. This is thanks to the great performance, quality display, and long battery life of the new ASUS laptop.

Of course, as a special edition notebook, it does come at a premium, with a starting price of PHP 84,995 for the i5 model. While it is on the more expensive side, it’s still worth considering for those in the market for a new premium notebook, especially for those who love anything and everything space related. Plus, the laptop dos come with a wealth of cool accessories, as well as Microsoft Office 2021 Home & Student License.

If you’re interested in getting the Zenbook 14X OLED Space Edition, you can get one now in select ASUS concept stores and partner retailers in the Philippines. Click here for the full list of stores where you can get the Space Edition.

Worried that all the units will be snapped up soon? Don’t worry as, while it’s a special edition, it’s not a limited edition laptop so you’ll have a good chance of getting one for yourself.