The Rumbling is coming to Dead by Daylight. 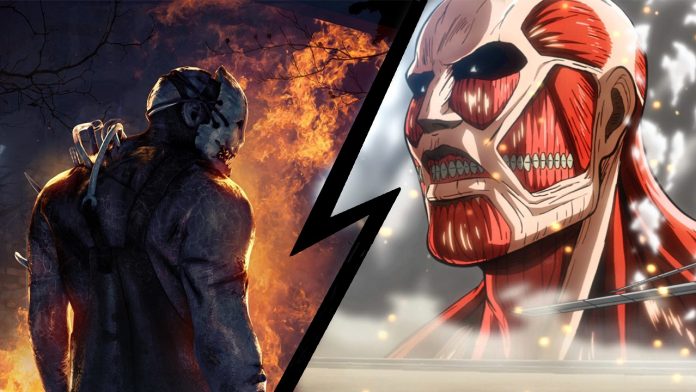 The rumbling is coming to Dead by Daylight as Behaviour Interactive announced the Dead By Daylight x Attack on Titan crossover shared during the game’s 6th-anniversary livestream.

Though this crossover will not feature a new survivor or a new killer, the game will launch new skins for survivors Dwight and Zarina which are inspired by Eren Yeager and Hange Zoe. Also, the Oni will receive a new skin inspired by the Armored Titan that will also aesthetically change when the Oni uses his abilities.

This is just the first part of the upcoming crossover as Behaviour mentioned that they’re planning to add ten more outfits for this collection, so other characters like Mikasa, Armin, Levi, and the Colossal Titan may also be included in the skin line. Currently, the Dead By Daylight x Attack on Titan crossover is still on its way, and there’s no confirmation yet on when it will go live.

For those who haven’t played Dead by Daylight, it is a 4v1 isometric horror game where players play as survivors and Killers where the four survivors must plan their escape to avoid being killed or sacrificed by the lone Killer. Dead by Daylight was launched back in 2016 and has been holding crossovers with other horror franchises from both movies and video games like Halloween, Nightmare on Elm Street, The Ring, Resident Evil 3, and Silent Hill, where they featured characters from those franchises.

Dead by Daylight is available on PlayStation, Xbox, Switch, PC, and Stadia. There’s also a mobile version of the game for Android and iOS devices.