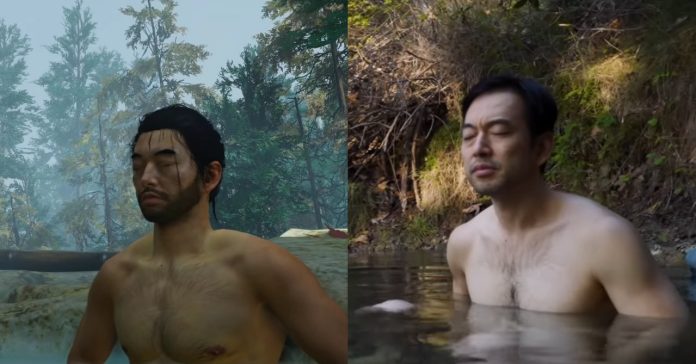 The said video was uploaded on YouTube by Toru Uchikado, a Japanese actor based in Los Angeles. In the video, Uchikado once again features Tsuji as they go hiking and try to look for a hot spring so they can recreate the popular hot spring scene from Ghost of Tsushima.

Of course, as the video was not shot in Japan, they were unable to find an actual hot spring. Though they were able to find a small pond that, while not hot, still looked the part.

You can watch the video here:

While the video’s highlight is certainly the hot spring recreation, it’s also sort of a mini interview as well as they talk about what’s going on with Tsuji recently.

Of course, the recreation is still our favorite part! Especially as they used music and text straight from the game.

Aside from this video, Uchikado also released another video with the actor of Jin Sakai a few months back. In case you missed that, it features Tsuji trying to recreate Jin Sakai’s moves in the game. You can watch it here.