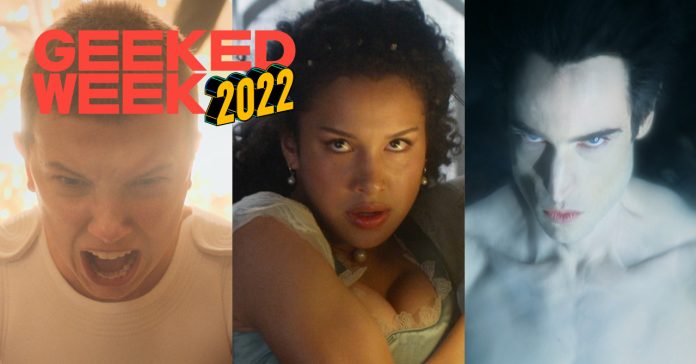 Netflix has announced that Geeked Week is back for 2022, and it promises to be even bigger than last year’s event.

This year’s Geeked Week is a five-day virtual fan event happening from Monday, June 6 – Friday, June 10. The event will be a celebration of Netflix’s genre series, films, and games; and aside from celebrating its popular shows/movies, there will also be big reveals at the week-long event.

To give you a taste of the Netflix Geeked Week 2022 event, here’s the official trailer for the event, narrated by David Harbour (of Stranger Things fame):

Aside from Stranger Things, you can expect new reveals and showcases for upcoming Netflix shows/movies, including The Sandman, The Umbrella Academy, Manifest, The Gray Man, Alice in Borderland, Day Shift, Resident Evil, and The Sea Beast. On top of these, there will also be new Netflix games to be shown at Geeked Week.

Each day of Geeked Week will be dedicated to different themes, including:

Aside from new show and movie reveals, lots of other announcements will be made by well-known hosts, including: Jacob Bertrand, jstoobs, Jaeden Martell, Reece Feldman aka guywithamoviecamera, Ella Purnell, Tiffany Smith, Felicia Day, B Dave Walters, Geoff Keighley and Mari Takahashi.

For more info on the event, visit GeekedWeek.com.