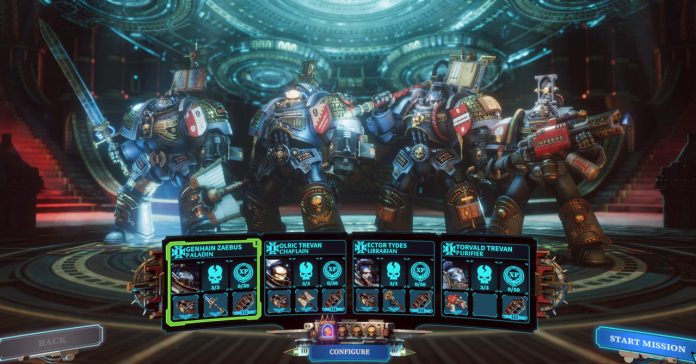 I still remember playing the original Chaos Gate in the 1990s. It sat perfectly in the middle of the original X-Com and Terror of the Deep in terms of difficulty, and it  introduced me to the grim dark world of Warhammer 40k (together with the Space Hulk videogame). More than 20 years later, we get a sequel of sorts, and I couldn’t be more excited to try it.

Not your daddy’s X-Com 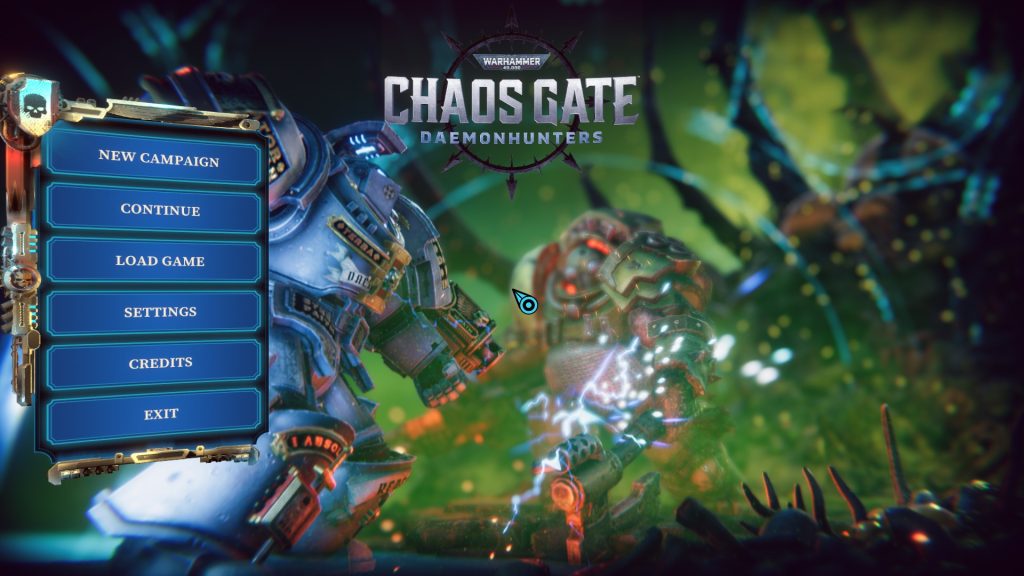 Chaos Gate – Daemonhunters is a turn based tactical single player game in the same mold as the extremely popular X-COM 2. You are the commander of the Grey Knights, a deadly chapter of the Space Marines that specialize in fighting — you guessed it — demons.

You lead a squad in 3-D isometric battlefield missions while purging the forces of chaos, investigating a galactic pandemic, and fulfilling objectives. Each Grey Knight receives 3 action points per turn to move, fire, engage in melee or use abilities.  Since your squad will almost always be outnumbered, the player has to rely on optimizing the teams action points and use of abilities to make sure objectives are completed and the Knights survive and don’t sustain too much critical damage.

However, while XCOM 2 tends to reward methodical play anchored on overwatch, Chaos Gate – DH pushes you to move forwards swiftly and accomplish your objectives as expeditiously as possible.  Every turn, a warp surge timer increases in value, and when it reaches 100%, a chaos event happens. This can take the form of additional enemy units, enemy mutations that make them tougher or buff their attacks, debuffs, or direct attacks to your Knights, or even area effects that cause damage or hinder your Knights’ movement or abilities. Once the chaos event happens, the warp surge timer starts again from 0 and works its way up to 100 and increases from 15 to 25% per turn. With multiple chaos events active in a mission, it can be nigh impossible to complete, thus it is important to accomplish objectives ASAP, giving the game a great sense of tension. 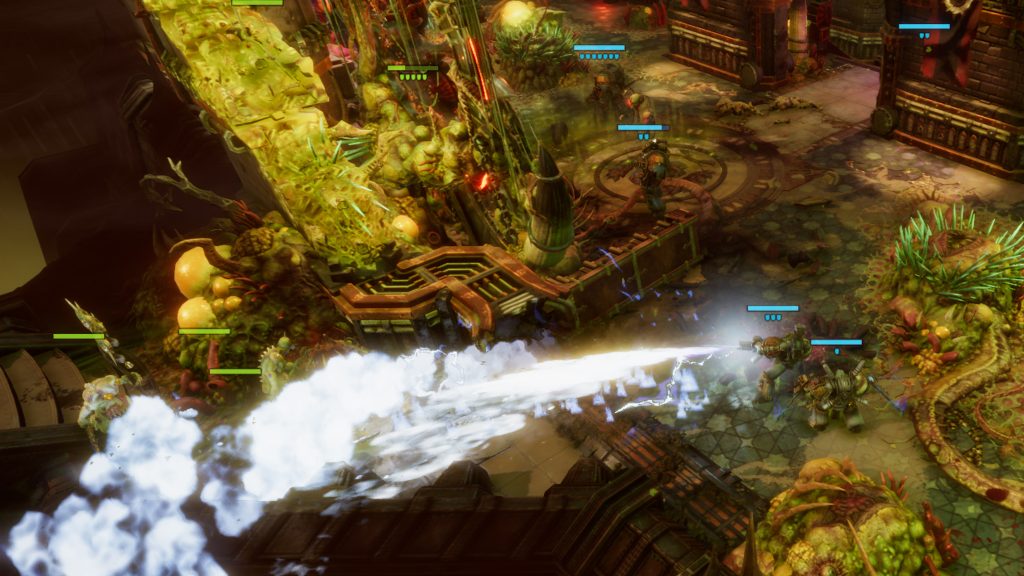 Unlike XCOM 2, you are limited in the amount of Grey Knights (aka soldiers) in your barracks. And since it takes them quite some time to heal, cycling the healthy and wounded can be a problem. However, Grey Knights are extremely hardy, so (again unlike XCOM 2) one can field them even if wounded, albeit with reduced hit points but with no other penalties to their other stats or abilities. The tutorial does a poor job explaining this though, and if you stick to the old XCOM habit of only using fully healed up units, you will find yourself in difficult predicaments especially in early game.

Also, a major departure from the XCOM formula is that there is no RNG in hitting or damage in  Chaos Gate – DH.  If you have line of sight, you automatically hit and damage is applied depending on amount of cover and other factors, but it is a known value which you can check before you attack or are attacked.

Speaking of abilities, the customization of the different classes of Knights is extensive; and together with a plethora of weapons, armor, and gear, gives the player options for multiple playstyles and strategies.  It is also particularly fulfilling once the player figures out how these abilities and gear can synergize with each other — that’s when you have your Grey Knights really working as a team. But as per Warhammer lore, using most of these abilities (that use psychic energy) increases the warp surge meter, presenting the player with an interesting risk-reward conundrum. 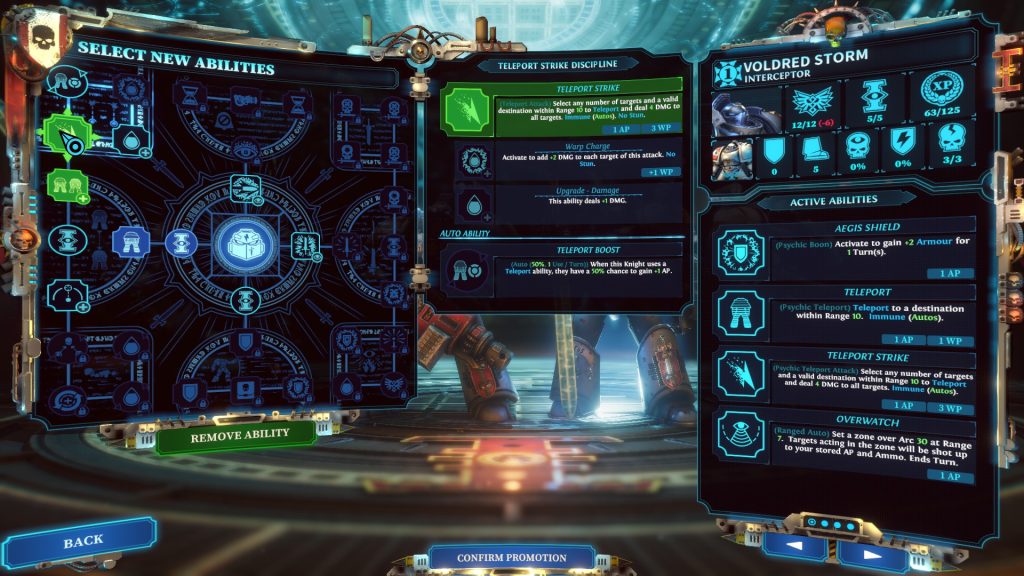 Another interesting innovation is the use of environmental objects to damage opponents.  For example, a Knight can target a pillar and it will fall on Nurgle cultists, killing them. The beauty of this system is that these environmental objects can interact very well with the Knights’ abilities, quite similar in fashion to how it works in Divinity Original Sin 2. And taking a page out of Fallout, certain attacks can target specific areas of an enemy disabling specific attacks and abilities or stunning them. A stunned enemy can be instantly executed via melee attack and this gives all Knights an extra action point!

The game has an adequate tutorial, but since there is so much meat and nuance to the tactical part of the game, many concepts are barely touched upon. If one solely relies on this and plays the game ala XCOM, I guarantee that you will not last long, even on normal settings. There is also a codex which is basically essential reading but is hidden in the settings menu, and the tutorial hardly mentions its importance. This game can be really punishing if you are not aware of its subtleties. I suggest that you check Youtube for good beginner tips and restart the game after a few missions without the tutorial, since this will allow you to choose your starting abilities, which is key especially during the beginning.

Down time is not down time

In between missions, the player manages the Baleful Edict, the damaged strike cruiser base of the Gray Knights in the game. The player prioritizes repairs, upgrades Knight abilities and manages gear inventory; and engages in story events and character interactions. The commander of your Knights is slain during the first (tutorial) mission (you replace him as the commander in the story), and your ship is heavily damaged but is commandeered by an Imperial Inquisitor on a special mission, putting you in a precarious position at game start.

You are unable to fully repair and resupply your ship and strike force, and you always feel the lack of resources to repair ship stations and further your investigations on the origins of plague. There is also the rapidly spreading ‘Bloom’ in the sector which you are trying to contain. All this adds up to wonderful game tension even outside of missions; and lots of things to do when your troops are not engaged in planetfall.

A not so smooth launch 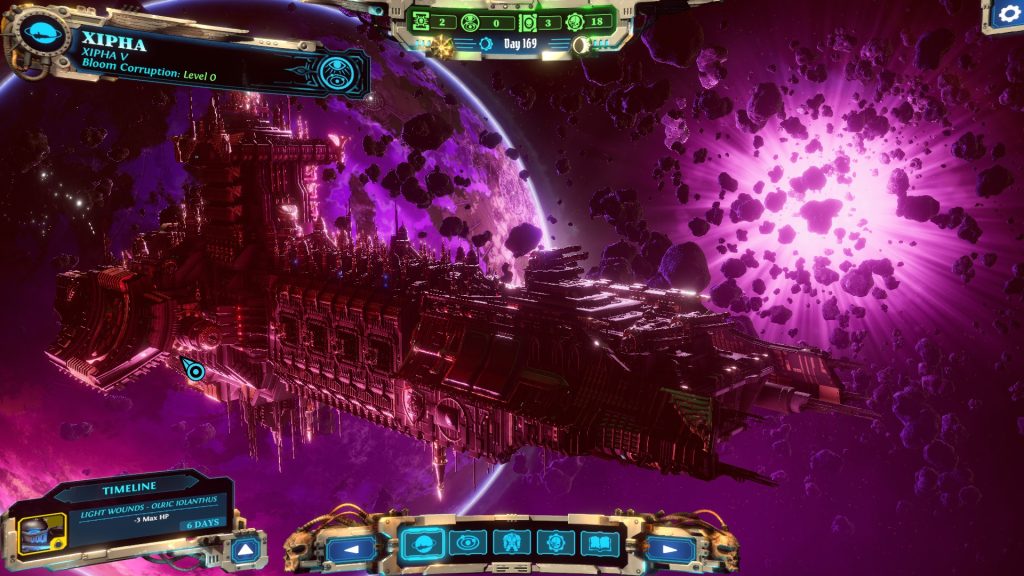 The game released on Steam on the first week of May 2022 and was flooded with poor reviews. The game’s graphics and sound are good, but it had some optimization and gameplay issues (most have been addressed by a patch). Many also complained of its difficulty since they played it similar to XCOM and its ilk. But the top issue was that certain in-game items, which in my opinion are very useful for the early game, were locked behind watching Twitch streams. The publisher, Frontier Foundry, has since said the items will be available to all in a future update. The game has gotten more favorable reviews and sits on a “Mostly Positive” rating at the moment, and will most likely improve still. 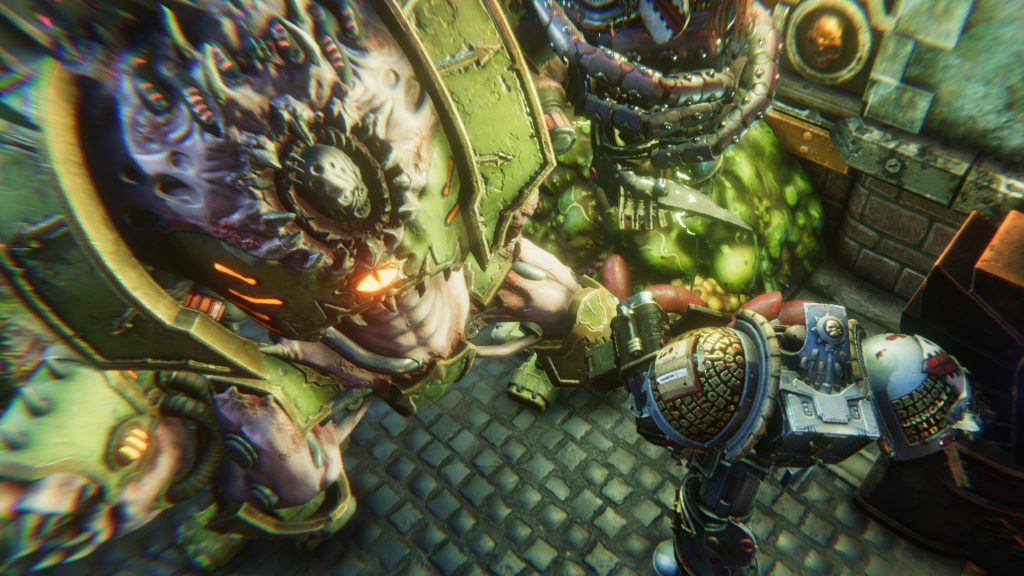 Despite its initial glitches, Warhammer 40k Chaos Gate – Daemon Hunters is a challenging game with many unique mechanics that sets it squarely apart from other turn based tactical RPGs. Also, it has a great, lengthy story and a look and feel that embodies the grim dark of the Warhammer 40k universe.  If you are a fan of XCOM like games, or are looking for an excellent WH40k videogame, or are just looking for a challenge, then you should definitely check out Daemonhunters. You won’t be disappointed. 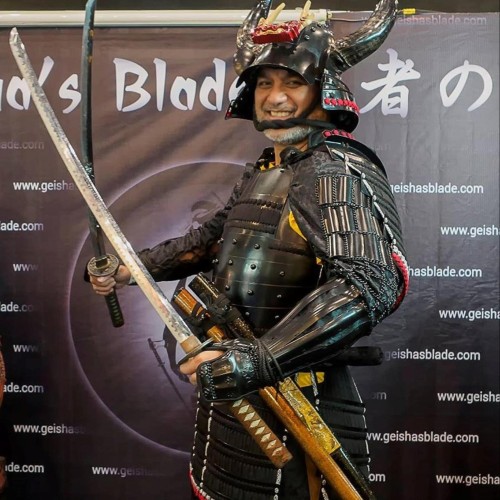