Check out these new Vivobooks and Zenbooks that are coming soon in the PH! 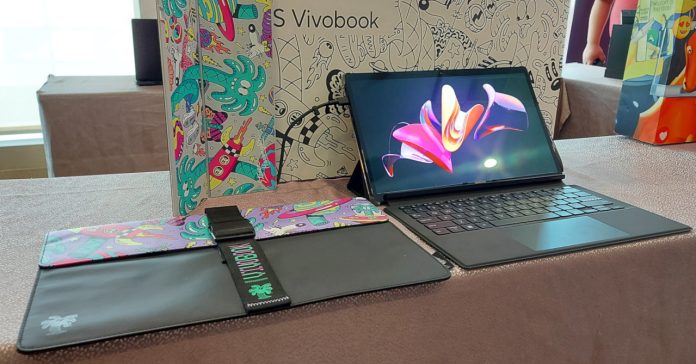 These new laptops are aimed at working professionals and content creators, with options for slim ultraportables to large creative work partners. All of these new laptops also feature OLED displays for vibrant colors and deep blacks. 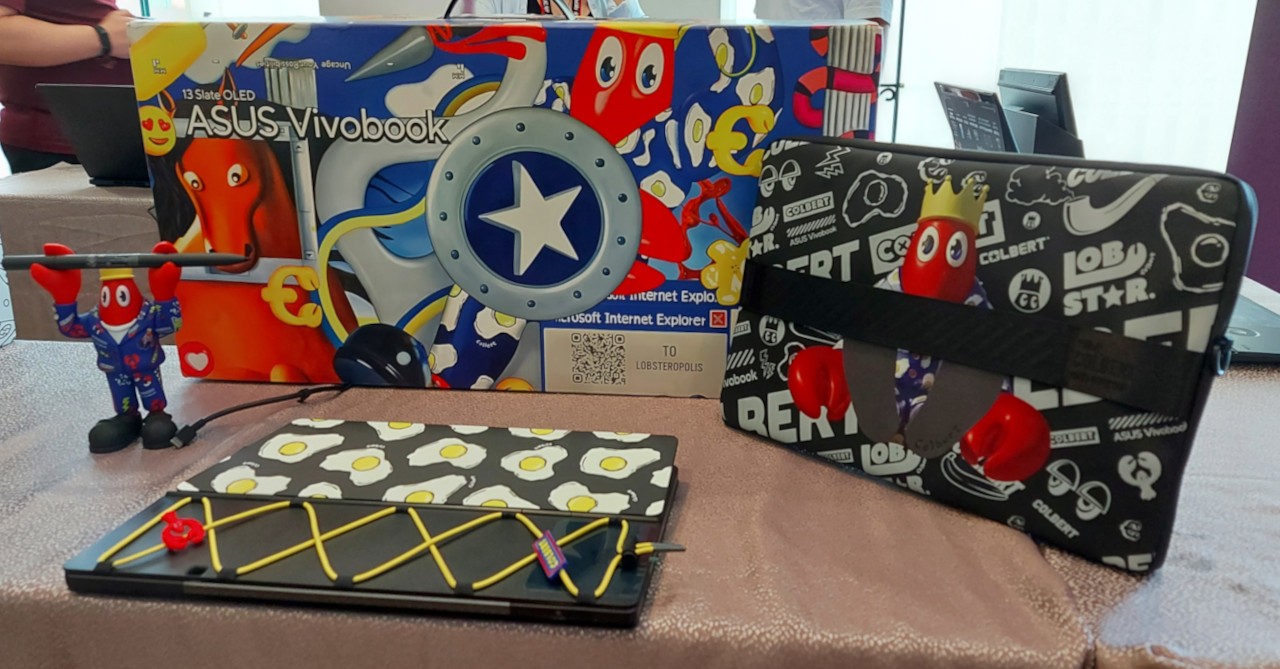 To start off we have the Vivboook 13 Slate OLED which comes in two special artist versions, the first of which is a collab with Philip Colbert. If you’re unfamiliar, Philip Colbert is a London-based artist who is often referred to as “the godson of Andy Warhol” and is known for his pop art works featuring his cartoon lobster persona. 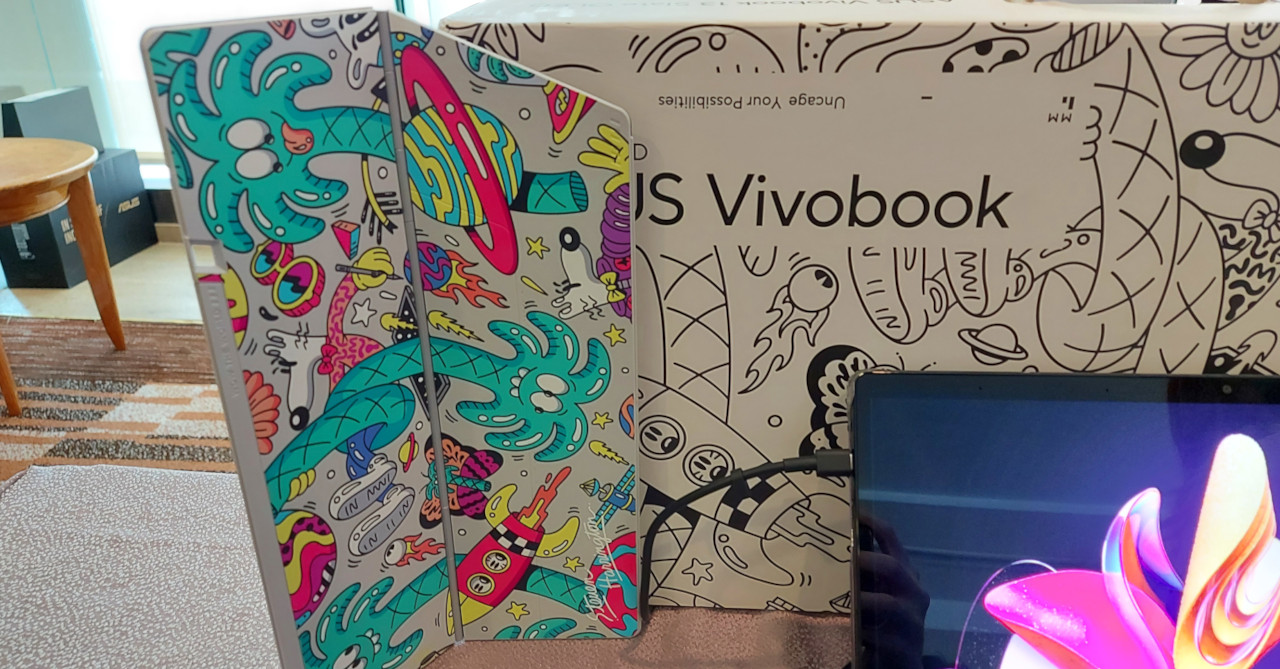 As for the artist himself, Steven Harrington is a Los Angeles–based artist known for his bright, iconic style that’s inspired in part by California’s mix of cultures and wide array of landscapes.

Meanwhile, here are the full specs of each 13 Slate OLED: 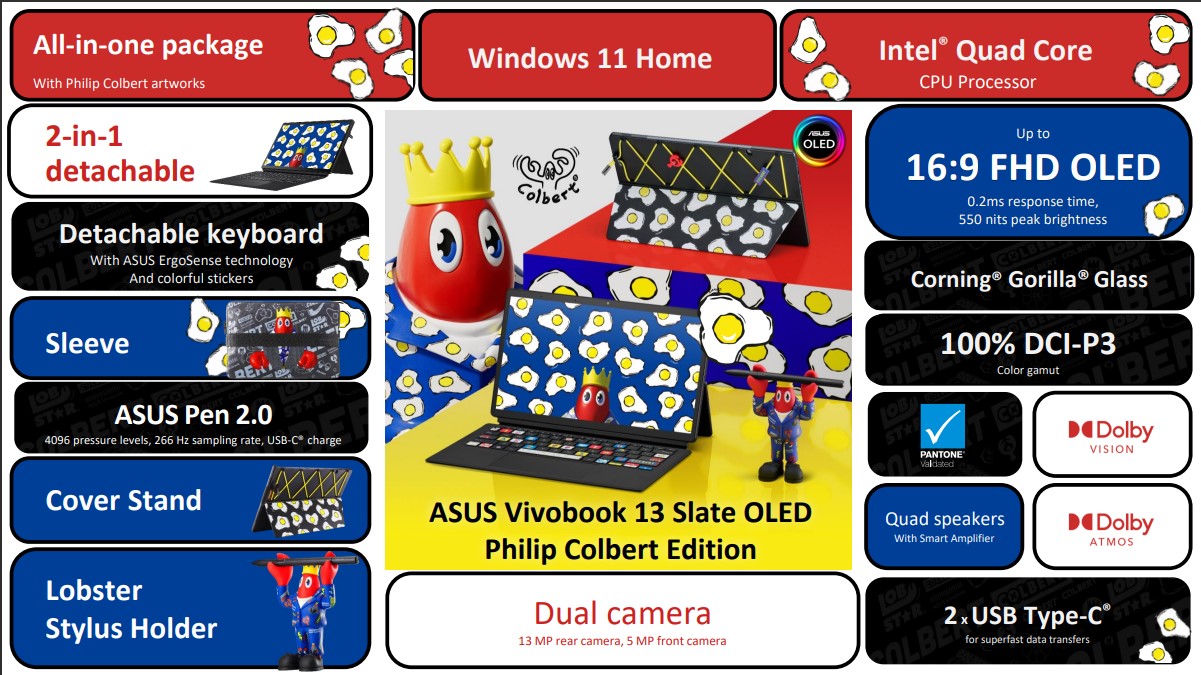 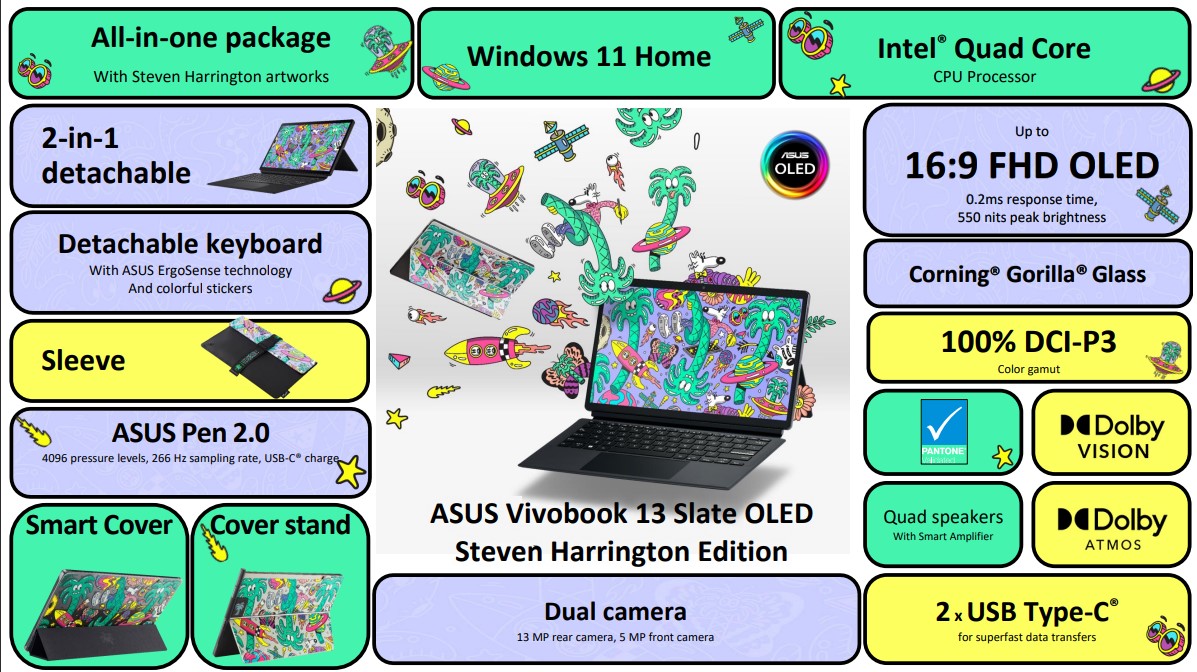 Next, we have the Zenbook S 13 OLED. This portable laptop is the lightest in the world to have a 13.3-inch 2.8K OLED display, complete with a 16:10 aspect ratio for better productivity.

Powering the laptop is the latest AMD Ryzen 7 6800U which is paired with 16GB of LPDDR5 memory and a 512GB SSD. Also included in the laptop is a fingerprint scanner, an ergonomic keyboard, and an antibacterial coating.

Check out the full specs here: 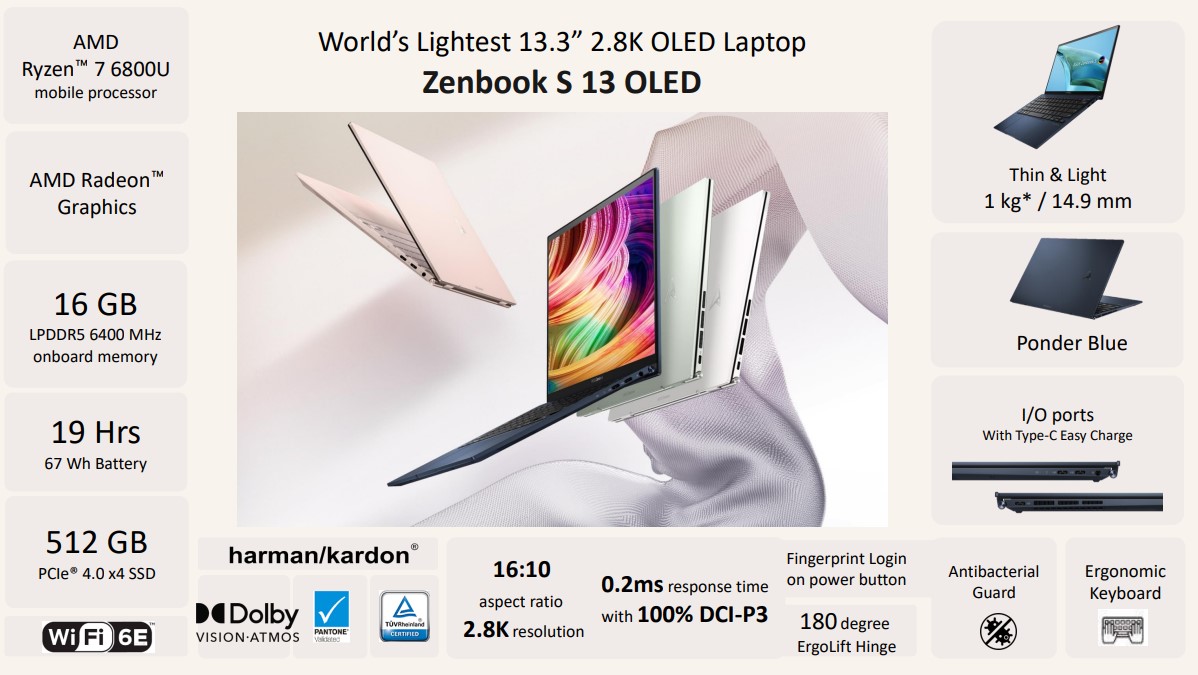 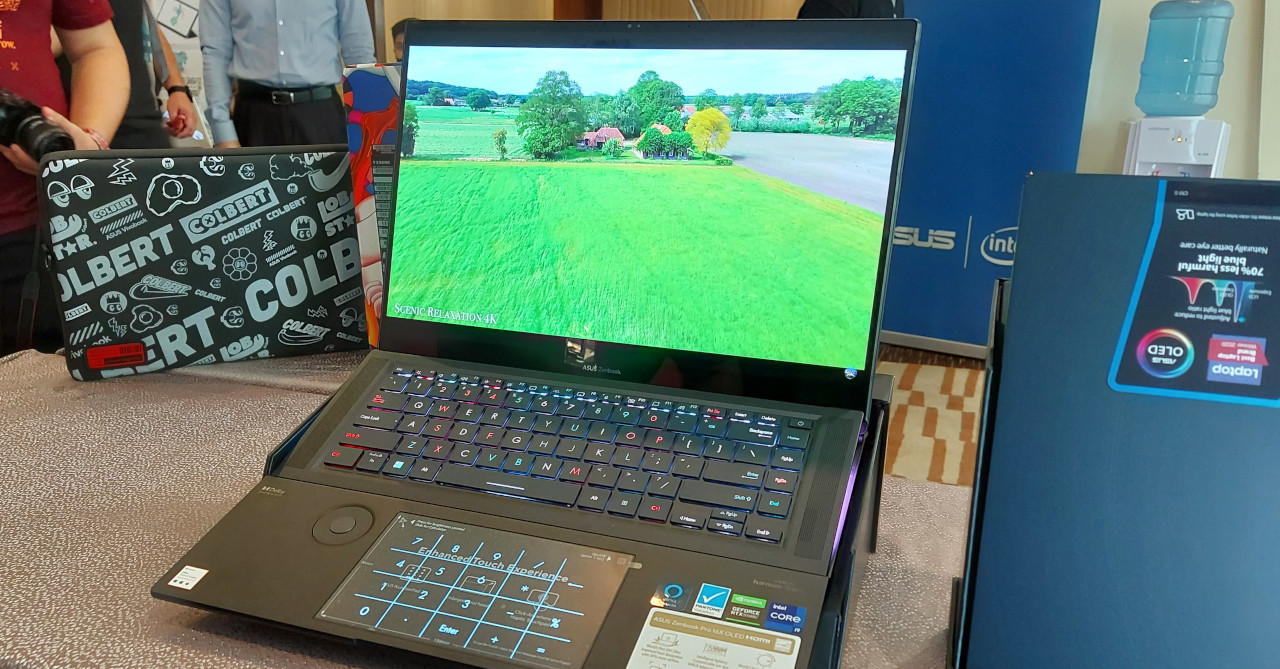 Finally, we have the Zenbook Pro 16X OLED. This new Zenbook features a large 16-inch 4K OLED HDR display that should be a great match for content creation. And given that the laptop packs a high-res screen, it has the specs to match as the laptop is powered by a 12th gen Intel Core i9-12900H paired with an RTX 3060 GPU.

Though the unique feature that makes the Pro 16X OLED stand out from other laptops is the ASUS Dial. Previously only found in ASUS’ ProArt Studiobook line, this Dial gives users more precise control in creative apps. Specifically, the ASUS Dial is compatible with the Adobe suite of apps, meaning you can use it to quickly access features in Photoshop, Premiere Pro, and more.

Finally, the laptop also features intelligent lighting as it packs RGB lighting on the sides, along with per-key RGB for its keyboard.

Here are the full specs of the Pro 16X OLED: 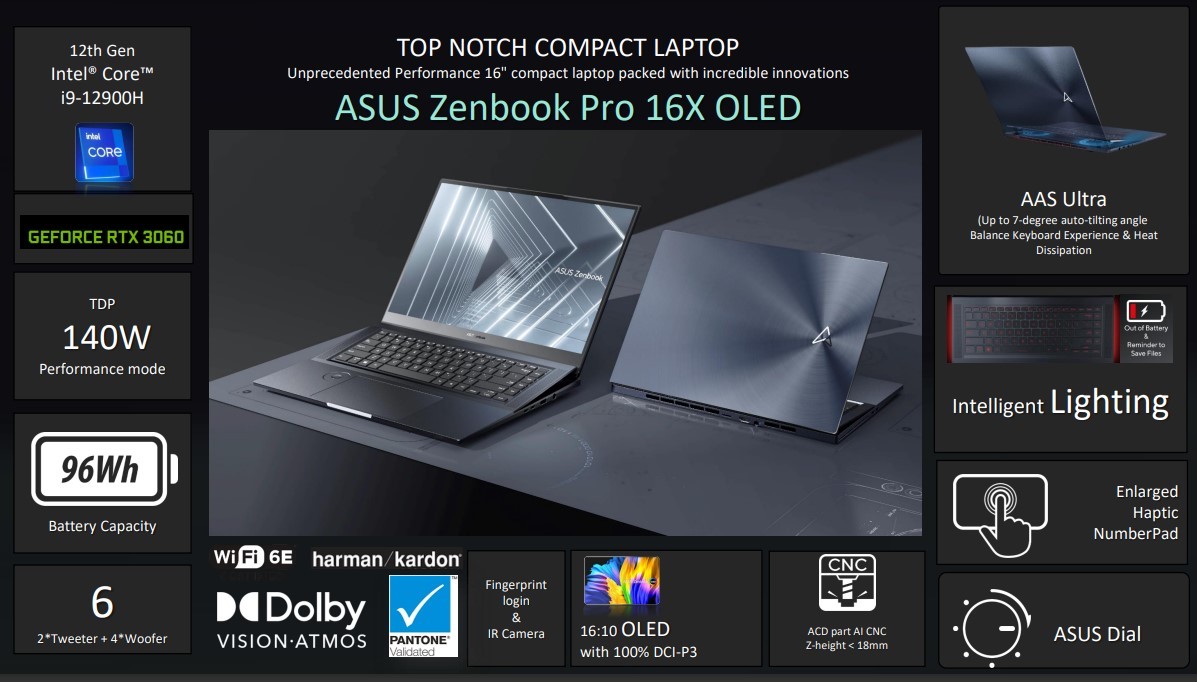 ASUS has confirmed that the Vivobook 13 Slate OLED, Zenbook S 13 OLED, and Zenbook Pro 16X OLED will release in the Philippines. Though currently, there’s no word yet on pricing and an official release date.

- Advertisement -
Previous article
Our top picks on Netflix for July 2022
Next article
Debut of Chris Hemsworth’s posterior in Thor: Love and Thunder was 10 years in the making