Everything Everywhere All at Once Review | Watch It, At Once!

Catch in now in cinemas! 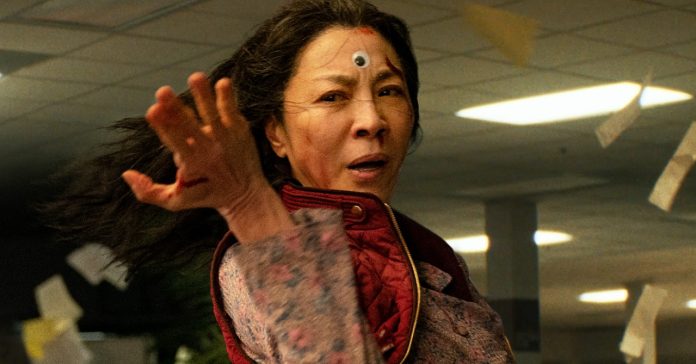 At this point, you’ve probably already seen lots of movies and shows that deal with multiverses, whether it’s Spider-Man: Into the Spider-Verse or the recent Doctor Strange film. You an even count Rick & Morty in as well for its multiverse hijinks.

Enter “Everything Everywhere All at Once”, a new film that features another take on the multiverse concept. Sure, a lot of you might be tired of another dimension-hopping adventure but hear me out. The movie is directed by Daniel Kwan and Daniel Scheinert (aka the “Daniels”) and produced by A24, and it is one of the best multiverse movies that you’ll ever see!

The film made waves when it released last March in the US, and finally, Everything Everywhere All at Once (let’s call it Everything for short) is out in Philippine cinemas. Having had the opportunity to watch an early screening, I can already say that it is a must-watch not just for cinephiles, but also for everyone.

I hope you’re already making plans to go to your nearest cinema to watch this. If you need some more convincing though, read on as I explain why Everything is no doubt one of the best movies of the year.

A Fresh Take on the Multiverse

Everything follows Evelyn, a laundromat owner who is overwhelmed with managing her business, as well as family matters. But while at the IRS, she gets contacted by an alternate universe version of her husband and gets involved in a plot that could threaten the entire multiverse.

I won’t explain any further about what happens in the story; not only to avoid spoilers but because it’s hard to adequately explain the crazy multiverse adventure that happens in this movie. What I can say is that, while a multiverse isn’t a new idea anymore, Everything manages to keep things fresh by introducing lots of crazy and funny gags, along with action and a heady mix of genres that provide lots of entertainment value, especially when you see it on the big screen. While there are certain moments where the movie slows down a bit so that you don’t get too overwhelmed, the film moves at a breakneck pace that will surely keep you engaged.

As a piece of entertainment, Everything is top-notch, but that’s not the only reason to watch this movie. While other action movies aim simply to entertain, this film is different as it has a lot of depth to it.

To be fair, there are lots of films that combine the thematic depth of an arthouse movie with the action and excitement of a blockbuster, but Everything kicks things up a notch. The movie explores a wide range of themes such as existentialism, parent-child relationships, romance, the past and regret, and a lot more. In fact, the film has like five movies worth of themes, and it manages to juggle all of these well. Not to mention that the film’s multiverse also functions as a reflection of these themes.

There are some points that Everything can feel a bit too much of an assault on the senses and the mind. But the film still is able to work thanks to its well told and expertly crafted story that, while dealing with a crazy multiverse, manages to be grounded, touching, and relatable.

A Touching Story with Great Characters

While I found the bonkers alternate universes and laundry list of film references to be memorable, the core story of Everything is still the movie’s highlight.

Again, it’s hard to explain this fully without spoiling the story, but the film’s grounded tale has something for everyone. In fact, the film’s story also packs enough of a punch to get you ugly crying (as it did a lot of viewers already in the US).

From a filmmaking standpoint, the movie’s story is also brought to life on screen well thanks to the script, cinematography, and editing. The film’s first scene is the best example of this. Without giving anything away, that first scene, while not exactly long, manages to give you everything you need to know about Evelyn’s situation and empathize with her, all while building up key story and character dynamics that will be explored more as the movie progresses. There’s truly no wasted time in this first scene as it is packed with elements that will matter later while still being easy to follow and quite gripping. And the best part is, the whole movie is like this!

Finally, the characters in the movie are just great to watch. Of course, the ever-amazing Michelle Yeoh killed it as Evelyn – this is probably her best role in her filmography. The film’s supporting cast is also just as good, with the film featuring great performances from Stephanie Hsu and Ke Huy Quan. Even Jamie Lee Curtis steals the show in some scenes. Simply put, the whole cast is excellent as they portray their characters convincingly and with a level of authenticity that you’ll surely find touching.

The Daniels and A24’s new movie is finally showing in cinemas in the Philippines, and it is well worth the wait. From its inventive multiverse adventure to the deep and touching themes that it presents, Everything Everywhere All at Once is a movie that is truly unlike anything you’ll ever see before. It is a creative mix of genres which give the multiverse idea a fresh spin, all while being supported by incredible performances, grounded by a touching and heartfelt story.

Everything Everywhere All at Once is the best movie that you can watch in cinemas right now, and if you can, you should definitely go see it!