Persona 3, 4, and 5 will soon be available on PlayStation, Xbox, and PC! 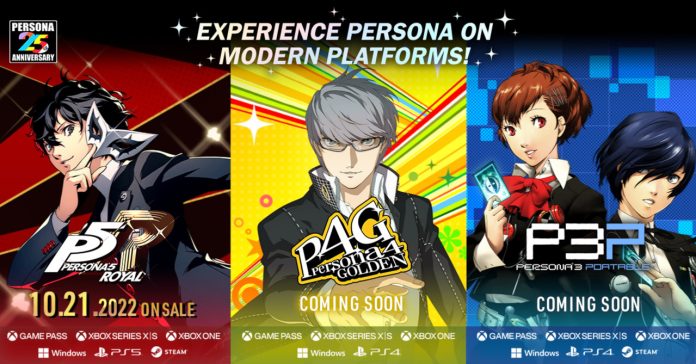 Following their Xbox release announcement, SEGA and ATLUS have confirmed that Persona 3 Portable, Persona 4 Golden, and Persona 4 Royal are also releasing on PlayStation.

The release of these games on PlayStation, Xbox, and PC are part of SEGA and ATLUS’ 10th Anniversary celebration of the Persona series.

Persona 5 Royal is the enhanced re-release of Persona 5 which features an expanded storyline, new characters, and new locations.

Similar to Royal, Persona 4 Golden is the enhanced re-release of the original Persona 4 for PS2. Golden was initially released as a PS Vita exclusive back in 2012, and it featured new Social Links along with other story elements.

The game was release on PC via Steam back in 2020, and it is now confirmed to release on Xbox Series X|S, Xbox One, Xbox Game Pass, PlayStation 5, and PlayStation 4. Currently though, there’s no word yet on a release date.

Finally, we have Persona 3 Portable, the PSP re-release of Persona 3. Released back in 2009 in Japan (2011 in the West), Persona 3 Portable features enhanced combat and a new female protagonist, though it does come with a more visual novel-like style given the hardware limitations of the PSP.

Persona 3 Portable is releasing on Xbox Series X|S, Xbox One, Xbox Game Pass, PlayStation 5, and Steam. There’s no word yet on a release date though.