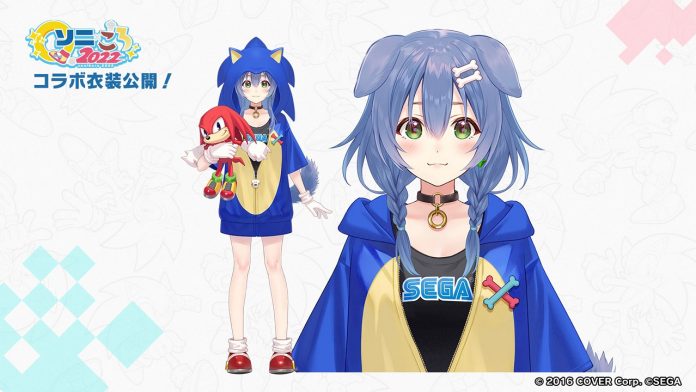 Hololive Vtuber Inugami Korone revealed her new Sonic-inspired outfit during SEGA’s Sonic the Hedgehog 31st-anniversary commemorative broadcast, and she appeared as a guest broadcaster of the program.

Her new outfit is inspired by no other than Sega’s mascot Sonic featuring a blue hoodie, a black SEGA T-shirt, and Sonic’s iconic red shoes. Her accessories include a Ring choker, Chaos Emerald earrings, white gloves, and a Knuckles plush doll. While in this outfit, Korone’s hair is now blue, and her eyes are green, matching Sonic’s color schemes.

Korone’s appearance on the Sonic the Hedgehog 31st-anniversary commemorative broadcast and the new outfit mark her appointment as SEGA’s new ambassador for their collaboration called SONIKORO 2022. This year-long collaboration will have Korone participate in Sonic-related events where she will live stream Sonic games that includes Sonic Origins, and she will also work with SEGA’s sound team.

Along with all the planned activities, Korone will also do voice acting for the Japanese dub version of Sonic the Hedgehog Movie 2 which will be released on August 19, 2022, although her role is still a secret. Other new things that appeared during the broadcast were the appearance of Amy’s Vtuber model and a new trailer for Sonic Origins that bundles the series’ classic entries and features a new story mode.