The Quarry Review | A Summer Camp for Sleepless Campers

Pack your bags and prepare to run. 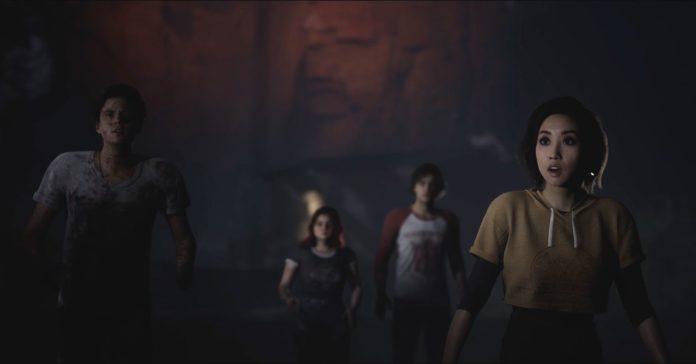 Supermassive Games’ newest game, The Quarry, is a departure from their previous entry, The Dark Pictures Anthology, and a return to a standalone entry in their catalog of interactive horror games. It mashes together different horror elements like the Summer Camp setting, the cast of characters, and creature feature, and it even has that 80’s feel to it despite being set in the modern day, making it a love letter from classic horror movies. Despite the heavy inspiration, The Quarry is a story and a game of its own, adding new stuff and omitting a few things from its predecessor.

Though admittedly, it still rebounds between the good and the bad things that Until Dawn and The Dark Pictures Anthology had before. Despite this fact, for me, it’s an improvement over Until Dawn, compelling me to not kill my hapless camp counselors and survive the night of horror during their last day of summer.

There is something in the Trees 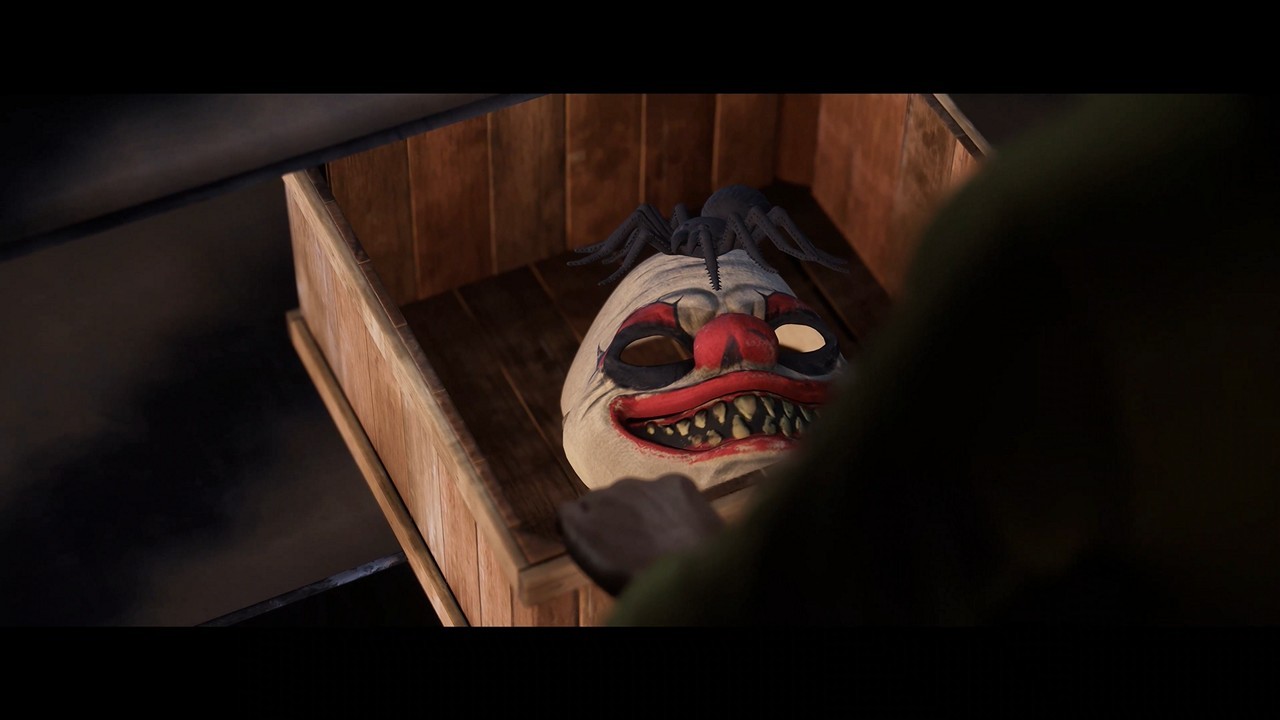 If you’ve seen the early preview, the story starts with the two camp counselors, Laura and Max, as they travel to Hacketts Quarry a night earlier than their scheduled arrival. Though they get derailed by a figure on the road. So “logically,” Laura decided to venture around the spooky woods, even after encountering a jolly ol’ cop with a request that she stay at the nearest motel for the night.

Just like in any horror movie, this prologue is here just to tell us that this is going to be the summer camp of a lifetime. Hinting to us the story it wants to tell early on, which is pretty nice considering that few of the options this early in the story will shape your path later on. This is very different from The Dark Pictures Anthology’s prologues where they are all set in the past that is too distant to actually be part of the gameplay. What I mean is in TDPA, the prologues timeline has a huge disconnect from the main story, so whatever you do there, is a definite path and won’t affect your gameplay later on, making it feel more like a thirty-minute or so tutorial.

Moving forward to the last day of summer, we see our seven Camp counselors, Abigail, Nick, Kaitlyn, Emma, Ryan, Dylan, and Jacob as they pave farewell to the kids officially ending the summer camp. But it seems the resident goofball, Jacob, doesn’t want to end things yet as he and Emma’s summer fling is about to expire. So, to spend just one last night to maybe change Emma’s mind, he sabotages the Van much to the chagrin of the summer camp owner, Mr. Chris (David Arquette) who’s acting borderline crazy just to make these teenagers go home immediately. 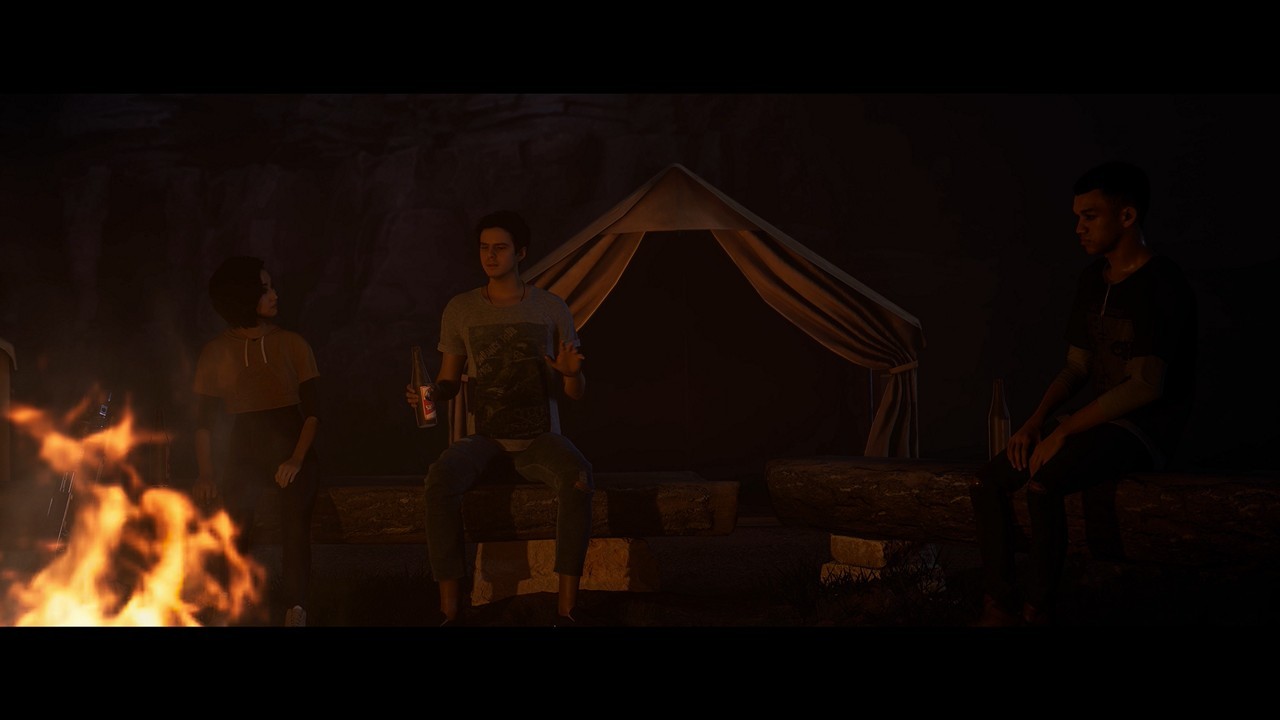 Just to avoid potential spoilers, I’ll stop talking about the main story but talk more about the premise. Again, the story was inspired by classic horror films, but with the pacing of the first chapters being fairly slow to keep the lull before the tension hits later on. It even has that Twilight-like atmosphere of having a lovey-dovey couple in the woods complete with cheesy background music. But what is great is those scenes don’t last too long; they last just enough to establish the romance aspect.

I can’t say the same thing for whatever that thing is stalking them though. It just didn’t really leave that much mark on me despite all the clues about its origin. It might just be my personal taste on a creature feature, but I prefer to know little of the monster just to tickle my imagination, but I guess it’s 2022 now everyone needs an answer. 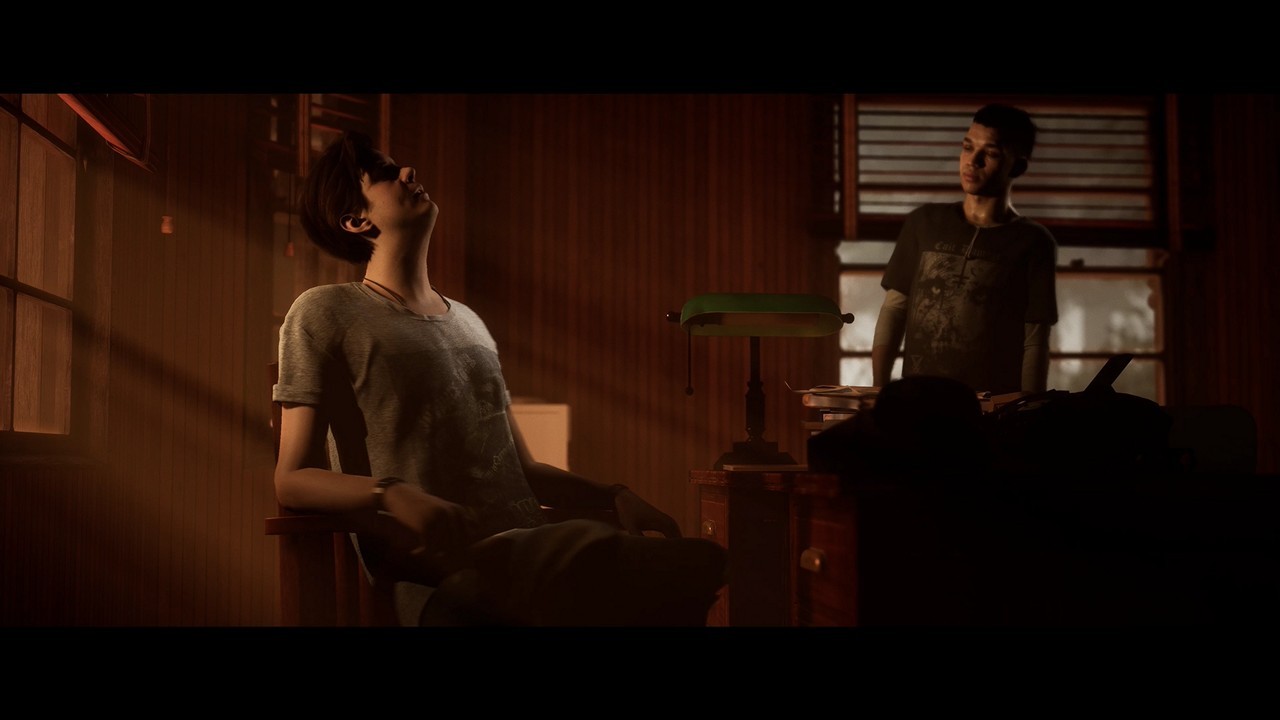 Another thing that I want to point out since this is a story-driven game, despite the gameplay being tied to our choices and actions, I would say that in these types of games, there is a definite path on how things will turn out. What is frustrating in these scenarios is that characters feel like they were just begging to get killed as they put themselves in danger haphazardly. Maybe it’s just that movie effect that we get where we backseat at the characters doing stupid decisions. 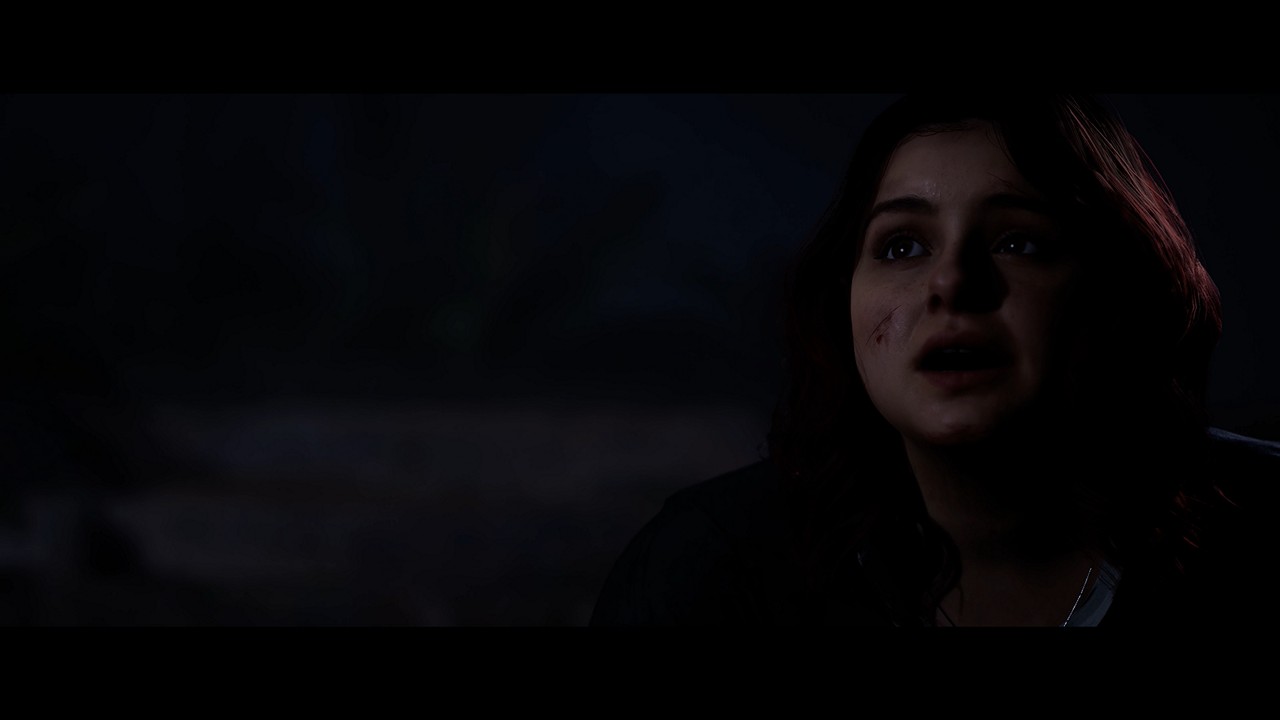 A great improvement in The Quarry though is the character rendering. Each character now looks better, except for Mr. Chris who for some reason has an uneven puff on his cheeks.

But other than him, they made a huge improvement in rendering the faces of actors and actresses in this game. They don’t have awkward facial expressions anymore, but still, it’s not perfect as there are times when characters talk to each other, they don’t seem to look each other eye to eye. Particularly the scene with Abi and Emma where Abi talks to Emma while staring straight at her chest for some reason. It was just a short scene, but sometimes characters kinda stare too far from whoever they talk to.

Technical bugs do also appear like the ceiling suddenly disappearing during a certain point in my playthrough. But these bugs do not happen too often thankfully. Perhaps the most awkward scene is the lake part where the water splashes look bad and seeing Jacob below the water as if he’s floating in space looks really funny.

A walk in the woods 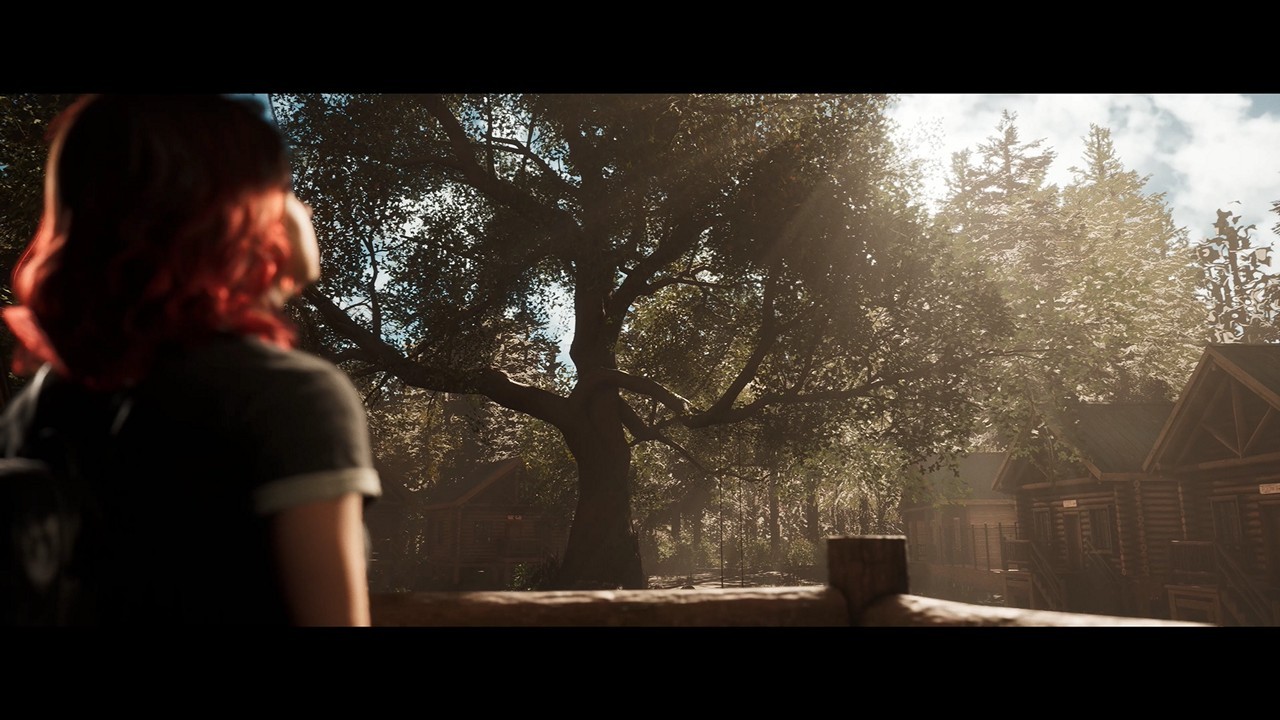 Navigating the path of Hacketts Quarry works the same as the previous titles; you get to choose your dialogue during cutscenes, QTEs, and Button Bursts still exist, and there’s also the “don’t breathe” portion to avoid detection. QTEs and Button Bursts stay the same, though I still confuse that Analog button for the O button. Meanwhile, the Don’t Breath is just the Keep Calm gameplay feature from Man of Medan but less irritating. They also dropped or hid the character traits which I found no real use for anyway.

But what is endearing is here is that they have this presentation of the dangers of Hacketts Quarry akin to what we see in modern Fallout games, I can’t say it’s necessary, but the presentation was a nice touch. 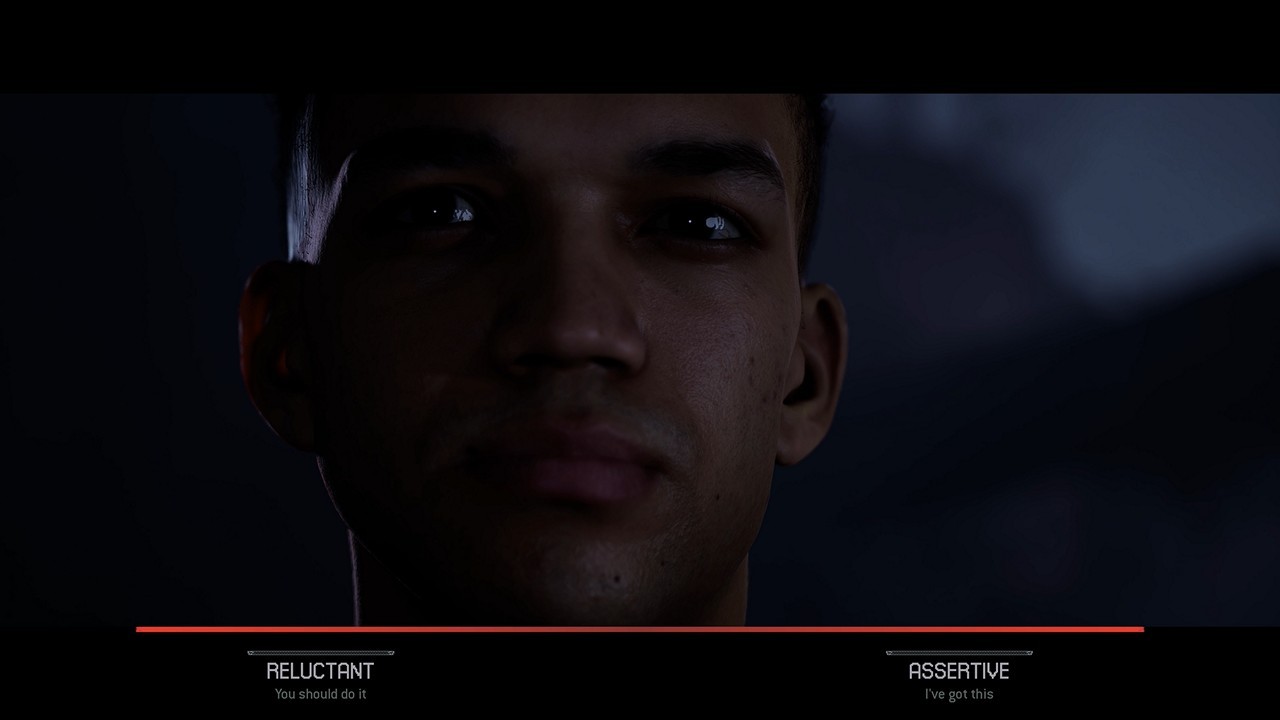 Other than that, there is no real change in the overall gameplay. I just really wished that the navigation during the exploration section of the game was improved. Since the camera is in this fixed camera angle and sits way too close to your current character’s back, it just feels awkward trying to look for hidden clues, evidence, and Tarot cards. Especially when looking for the said Tarot cards, many of which are placed in a weird spot.

These Tarot cards work the same as Totems and Paintings as they give you a glimpse of possible scenarios with little information on what to do. But what makes the Tarot cards different from the Totems is you’re only allowed to see one future at a time during the end of a chapter. It also seems that it’s not possible to collect all cards in one playthrough, and according to the developers, there are over 186 possible endings for the characters, giving the game a high replay value if you want to see all paths that you can take. 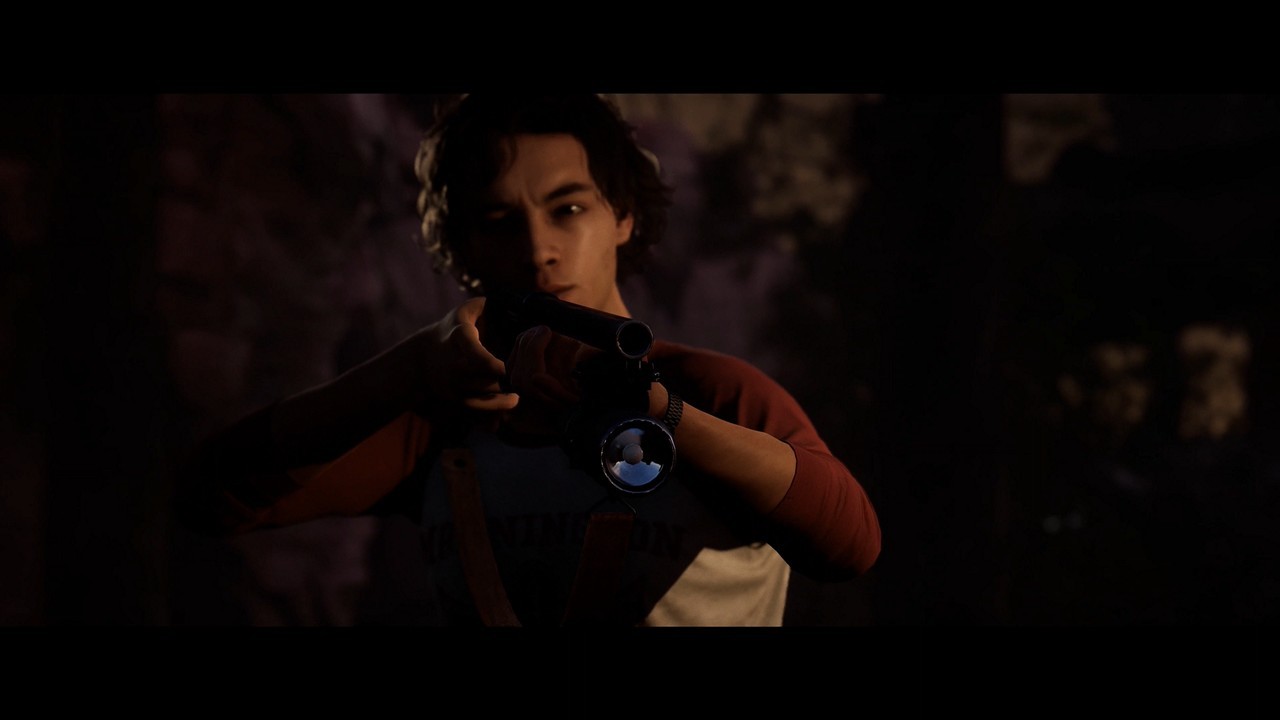 They also added this Death Rewind feature where if a character dies, you can make a do-over to save them. But it seems that the point at which your choices matter on the character’s demise varies, so it can set you far back in the chapter. It can discourage some people to redo things all over again since there is no option to skip cutscenes, so use it only if you want to save that character. 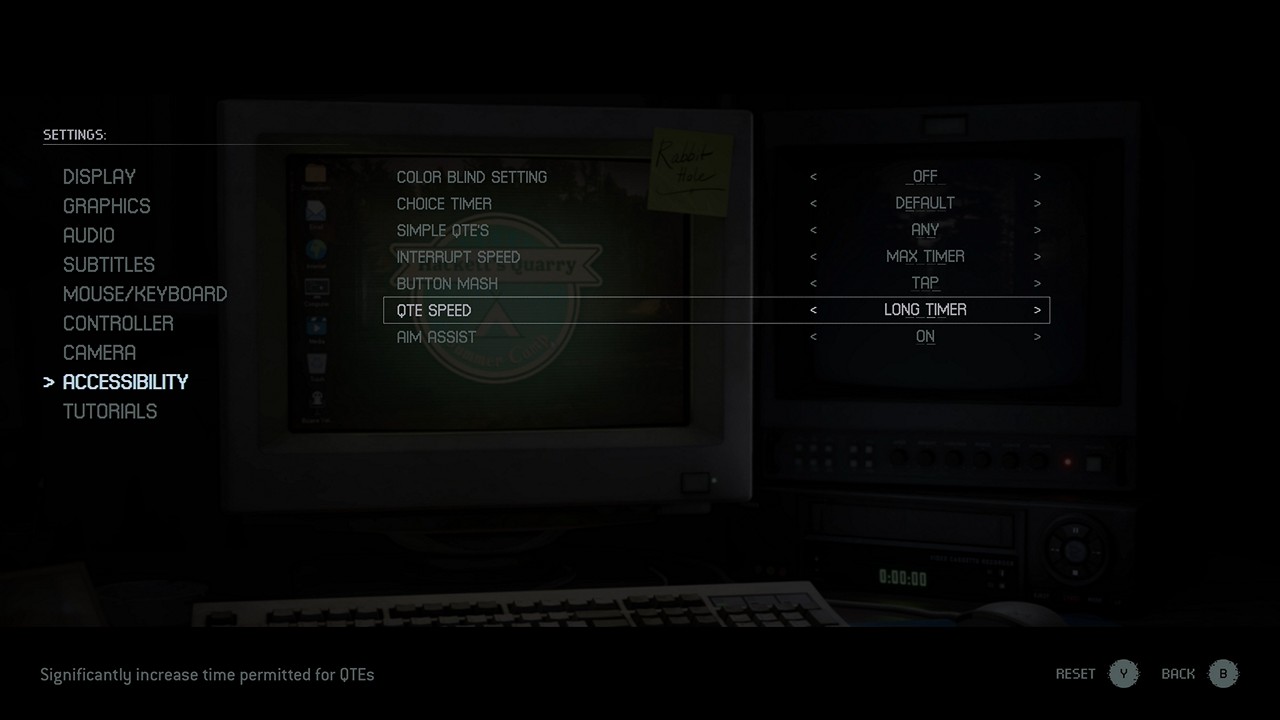 Lastly, there’s also a combat portion, but whether you shoot or not there, is an equivalent consequence to it. So use your judgment if you really want to pull that trigger.

Overall, if I compare the gameplay of The Quarry with the other games from the studio, I’ll say that it feels tamed. It’s as if they made QTEs easy to respond to, with no real pressure during these timed actions. Not a real problem since the option to adjust the speed for you to respond exists, so you can either make it to have more or less time to decide your action if you think that the default timing is too easy for you. 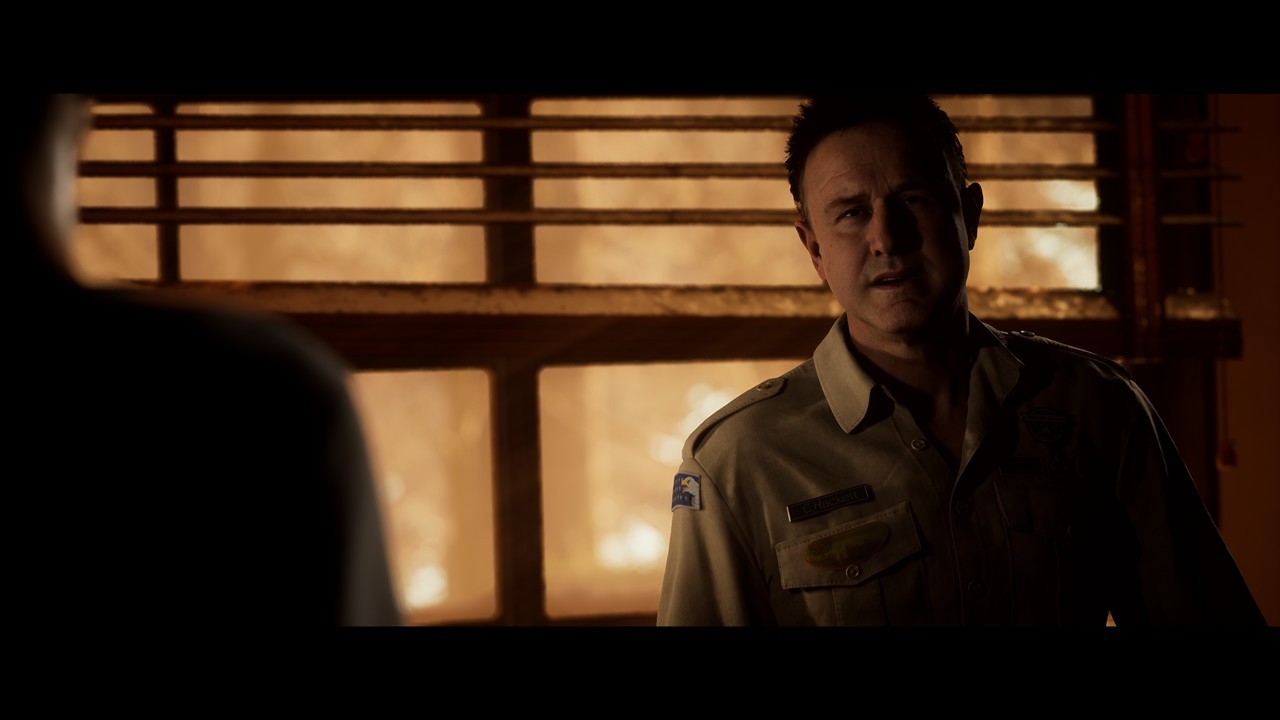 What raises my eyebrows are some scenarios that feel nonsensical, leaving me confused like that time when a character drops an important item for some reason or when they got dragged by a closed ceiling. Whenever this happens, I just simply shrugged it off and though maybe my path was already set from the get-go, but it kinda ruins the flow because of the confusion.

Scary? Definitely not. Suspenseful? It does have its moments except during the QTEs and choices that provide respite rather than tension. I got to admit though, it feels inspired that some options can seal a character’s fate early on, leading to tons of possibilities on how the story turns out. But the problem is, if you’re trying to build their relationship, it can also lead to an abrupt end with no closure, which feels bad in a narrative standpoint.

While the length of the game is decent enough to keep me playing with a nice cast delivering great performances, what shines more is the replayability as it’s fun to change some of the key choices that you make in another playthrough. What didn’t click for me though is the creature that became a nuisance rather than something to be scared of. But again I have to give it to them, I didn’t encounter much in the way of cheap jumpscares just to present the danger of Hackett Quarry.

Overall, The Quarry is a good improvement and a good direction for Supermassive Games’ interactive horror titles.

The Quarry was reviewed via a PC game code provided by the publisher.

The Quarry Review | A Summer Camp for Sleepless CampersThe Quarry's pacing can be a tad slow, but it is short enough not to overstay its welcome before getting to a more tense pace. But the tension was not transferred onto the gameplay where choices acted as more of a respite during these hectic scenarios. Still, despite some questionable moments, it is pretty engaging game with a high replay value.