From Starfield to Forza Motorsport, here are the highlights of the Xbox & Bethesda showcase. 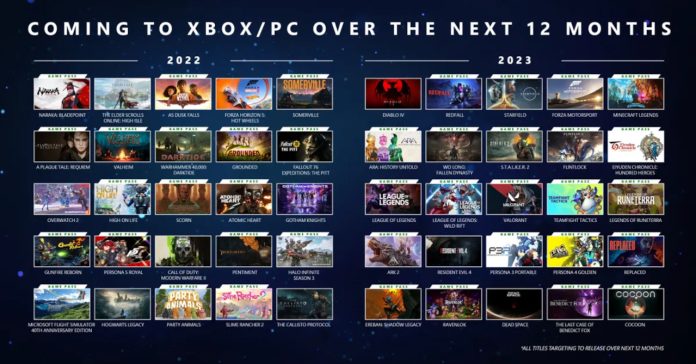 The Xbox & Bethesda Games Showcase 2022 featured lots of impressive showcases of upcoming titles coming to Xbox and Game Pass. The games revealed during the showcase include lots of anticipated Xbox Games Studios titles, along with a wide array of third-party titles coming to the Xbox platform.

In case you missed the showcase, here’s a recap of the biggest reveals and trailers from the Xbox & Bethesda 2022 showcase!

Starfield was the last game to be shown, and it was definitely a big highlight as we finally got our first look at Bethesda’s highly-anticipated next major title.

Another big announcement was Microsoft and Riot Games’ partnership which gives Game Pass subscribers access to all champions in League of Legends, all agents in Valorant, and more.

The showcase also featured our first look at Forza Motorsport, the next installment in Turn 10’s popular motor racing series.

Overwatch 2 was also given the spotlight during the event, and it was revealed that the game will be free-to-play when it releases this October.

Another Blizzard game shown during the event was Diablo 4, with a trailer showing off the game’s Necromancer class.

After it was initially revealed last year, we finally have our first look at gameplay of Redfall, the next game from Arkane Studios.

The Persona series is finally coming to Xbox! Specifically, Persona 3 Portable, Persona 4 Golden, and Persona 5 Royal are coming to Xbox and PC soon.

Another much-anticipated title is Ark 2 which got a new trailer.

Aside from these, there are lots of other games shown during Xbox’s big event. If you want to get the full experience, check out the replay of the showcase here: