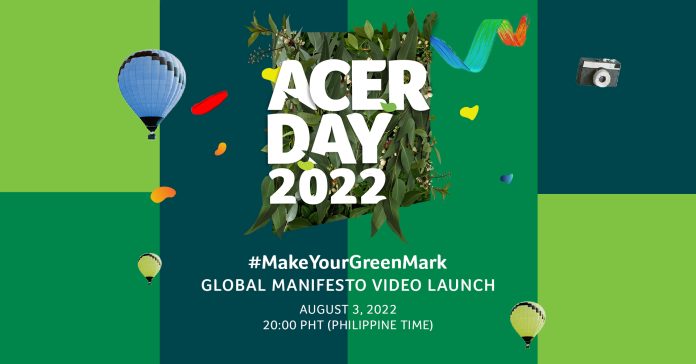 The annual Acer Day celebration is back and will feature a special line-up of performances, sales promotions, rewards, and activities for everyone to enjoy! This year’s theme, ‘Make Your Green Mark’, highlights Acer’s care for the environment by reigniting its passion for sustainability practices and serves as a reminder for the collective efforts needed in making a “green mark.”

“Introduced in 2017, the Acer Day campaign has helped promote the company’s brand image among consumers as ‘Young and Stylish’, while promoting its advocacies, consumers, and channel partners. This year, with the focus on sustainable living and the promotion of the eco-friendly Vero series, Acer hopes to garner more support for environmental efforts and remind everyone of their duty to preserve and care for our planet,” said Andrew Hou, Acer Pan Asia Pacific President.

Acer Day 2022 will kick off with a manifesto video on August 3, 2022 at 8:00PM (GMT+0800hrs) featuring its 18 ambassadors from across seven regions. These include India’s Pankti Pandey, a zero-waste advocate and a TEDx Speaker; Malaysia’s Mei Yan, a top breakfast radio announcer who started an online channel called “Heal The Earth” to raise environmental awareness; Indonesian musicians Muhammad Pradana Budiarto and Ayudia C, environment patrons who wish to inspire entrepreneurs and start the #SayangBumi (love earth) greener lifestyle.

All of the Acer Day 2022 ambassadors are strong environment preservation advocates who have continued to make a positive impact to the global youth in their own ways.

The “Make Your Green Mark” campaign manifesto reads: A call to action for cleaner air, clearer waters, and a sustainable future. In the video, the Acer Day ambassadors share their passion to protect Mother Nature and encourage their fans and followers to make their green mark on the planet. 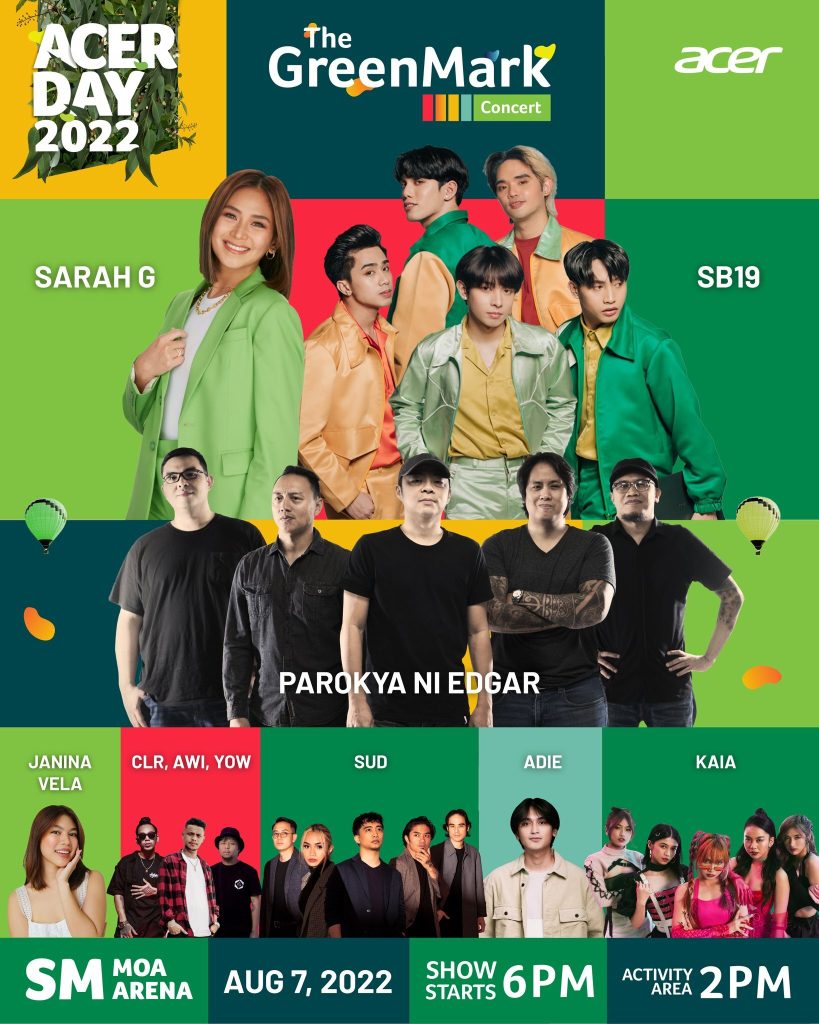 To support Acer Day and the Make Your Green Mark campaign, fans can watch the Acer Day concert featuring Sarah G, SB19, Adie, Sud, Janina Vela, Yow, Awi, CLR, and Parokya ni Edgar on August 7, 2022 at the MOA Arena. The concert is free! In order to get tickets, participants must do green initiatives such as joining Acer’s social media contests and challenges, purchasing Acer products including those from Acer’s sustainability line Aspire Vero, donating to GreenEarth Heritage Foundation; and collecting cleaned, washed and dried plastic waste and dropping them off at The Plaf, a social enterprise that recycles plastic.