The EKSA Star Engine E5000 Pro is a solid gaming headset with a range of premium features. 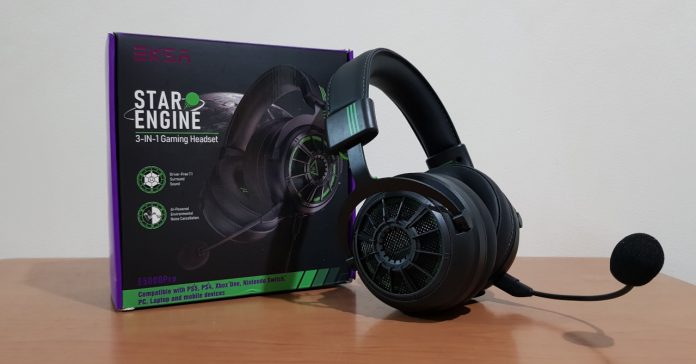 Previously, we’ve been able to check out some EKSA gaming headsets, including the E1000 and the E7000. Now, we have with us the Star Engine E5000 Pro, another gaming headset with a couple of major differences over the previous models that we’ve tried.

For starters, this headset features a removable cable and detachable mic – great features to have for portability and longevity. Along with these, the Star Engine E5000 Pro also features virtual 7.1 surround sound which promises a more immersive gaming experience. On top of these, the E5000 Pro has large 50mm drivers for good gaming audio, along with compatibility for PC and all major consoles.

So, if you’re looking to upgrade to a new headset for your PC and gaming needs, the E5000 Pro is a strong contender. But if you want to learn more about the headset, here are five nifty features of the Star Engine E5000 Pro that stood out when we tested it. 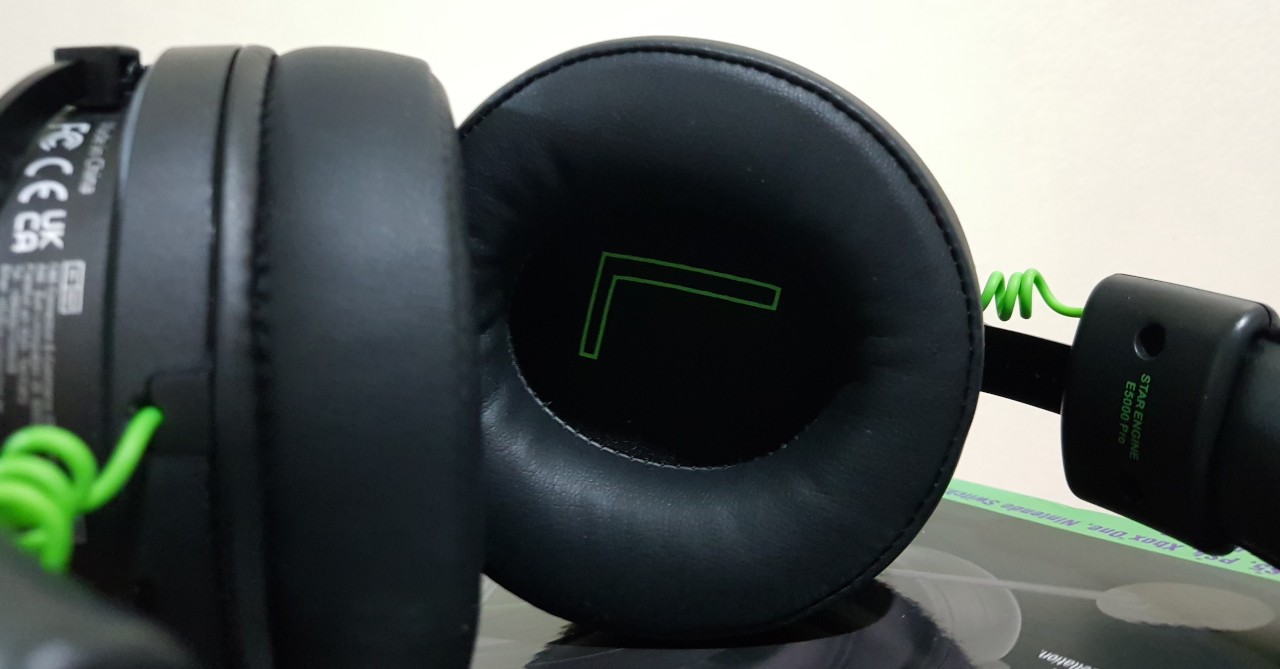 To start with, the EKSA Star Engine features a black-and-green colorway with a body that feels solid, meaning it will likely stand up well to everyday gaming use. It also helps that the headset has a metal construction for its headband. While this means it has a strong clamping force out-of-the-box, it will become more comfortable as you use it more (you can also stretch it out a bit to ease the clamping).

Though in my time with it, I didn’t find the clamp of the headset uncomfortable. In fact, I found it fairly comfy to use even for a couple of hours of gaming. Of course, your mileage may vary, but it’s undeniable that the E5000 Pro features plush 1.1-inch earpads that are comfortable. Also, the earpads were thick enough and the earcups deep enough that my ears only barely touched the drivers. 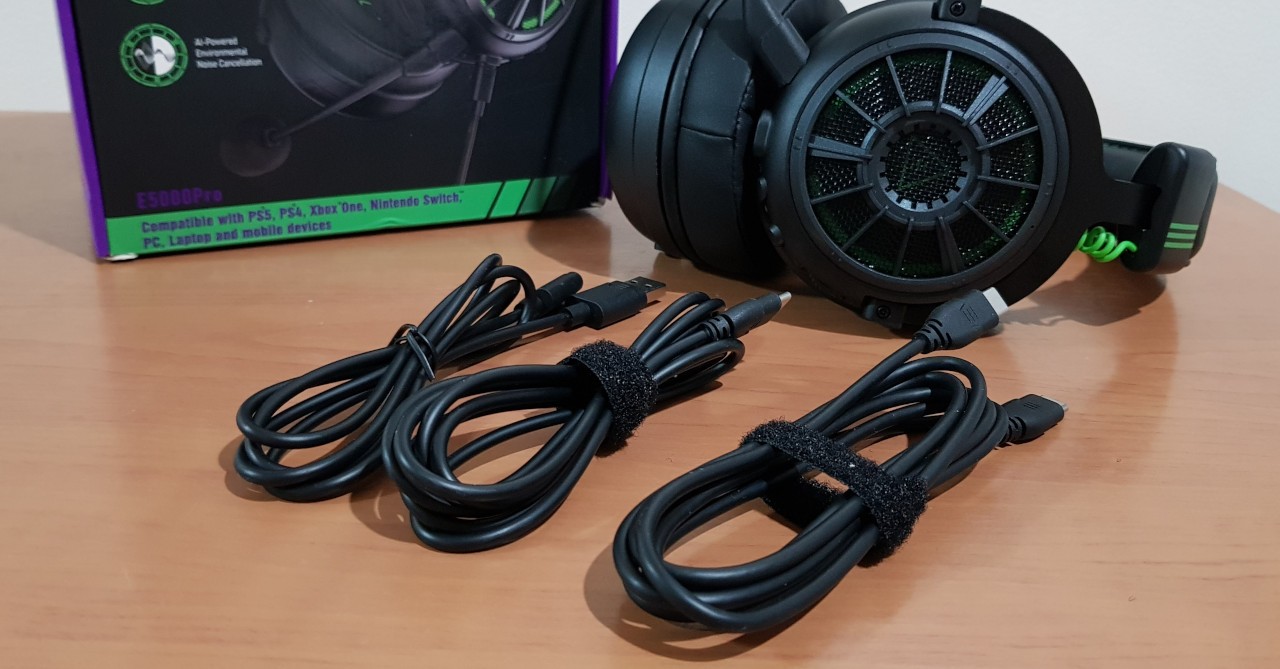 For example, if you’re gaming on mobile or a console (through the controller on PlayStation or Xbox), the 3.5mm plug is the way to go. But if you’re on PC, using the USB Type-C or Type-A cable is a must as you can take full advantage of the headset’s 7.1 surround sound feature when you have the EKSA software installed. 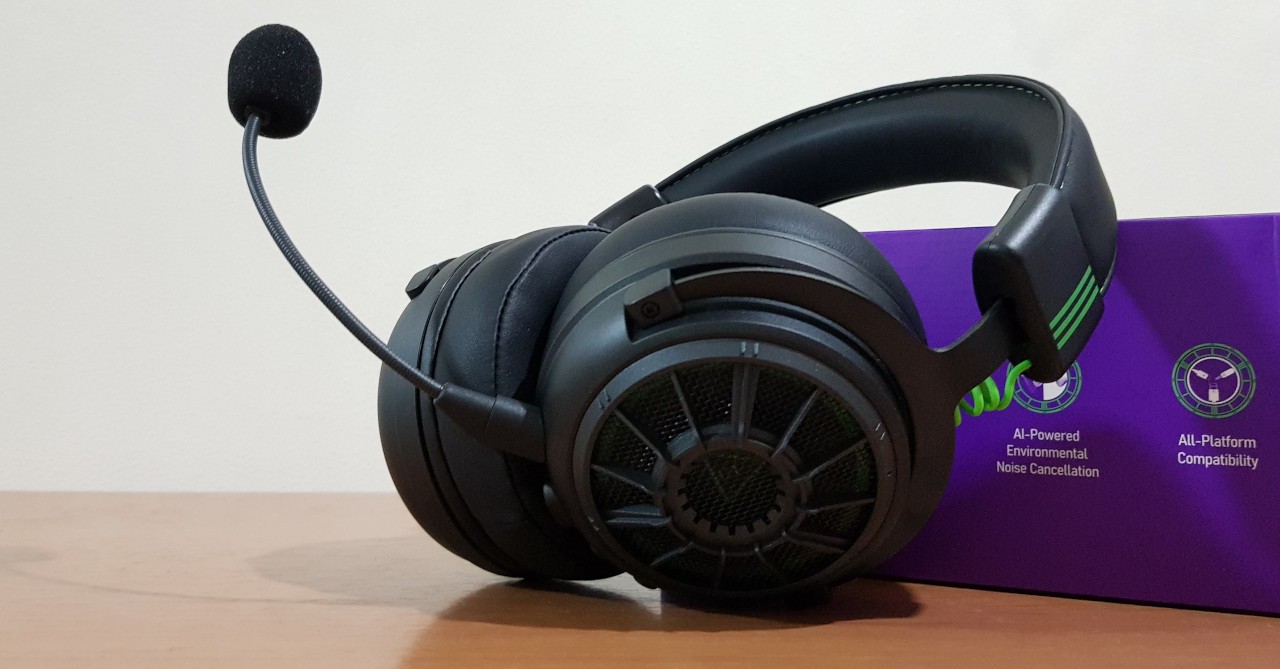 As a gaming headset, the Star Engine E5000 Pro features a nice microphone with noise-canceling capabilities, meaning it can block out noise like from a fan so that your teammates in-game can hear your voice. Aside from the quality, what makes the E5000 Pro’s mic great is that you can easily detach it. This is useful when transporting the headset as you can minimize damage to the mic.

The detachable mic is also great for when you want to use the headset for music or to play single-player games (basically for uses where you don’t need to speak to the mic.

The E5000 Pro’s mic attaches to the left earcup, and beside it is a mute and a multifunction button, as well as a volume dial for easy volume control. Having a mute button is always a nice touch as you don’t have to fiddle with audio settings in-game or on Discord to put yourself on silent. Also, the multifunction button is useful as it lets you switch on/off the headset lights, as well as turn the 7.1 surround sound on and off. 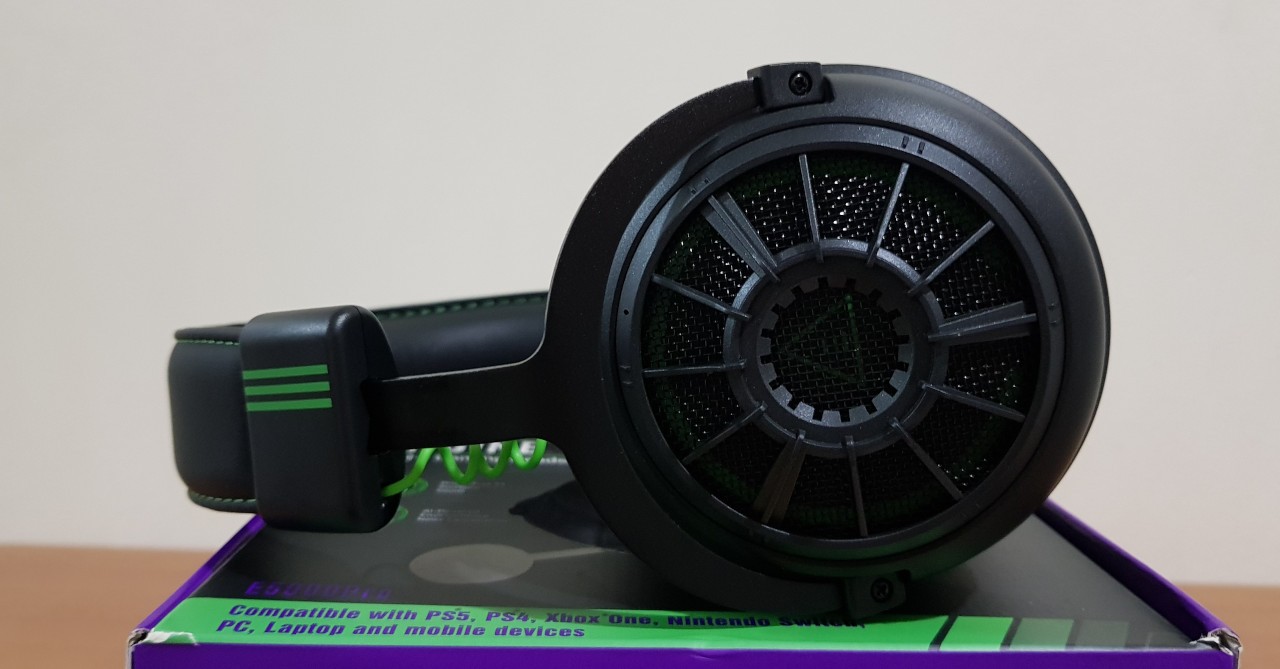 Having premium features is great and all, but if a headset sounds bad, then it’s not worth getting. Thankfully, the Star Engine E5000 Pro delivers in this regard, especially for gaming. Even in its default audio setting, the E5000 Pro sounds great for gaming. For example, the sound has satisfying levels of bass for action-packed, story-driven games.

Meanwhile, you can also hear positional audio cues clearly on it when playing FPS games. On top of these, the virtual 7.1 feature adds surround sound to your games. While it’s not true surround sound and is just a virtual software solution, it can make some games feel more immersive. Though if you prefer to have it off, the E5000 Pro’s default audio is still good.

As a side note, the Star Engine is a great match for the PS5. Specifically, the PS5’s 3D audio effect for headphones sounds great on this headset. 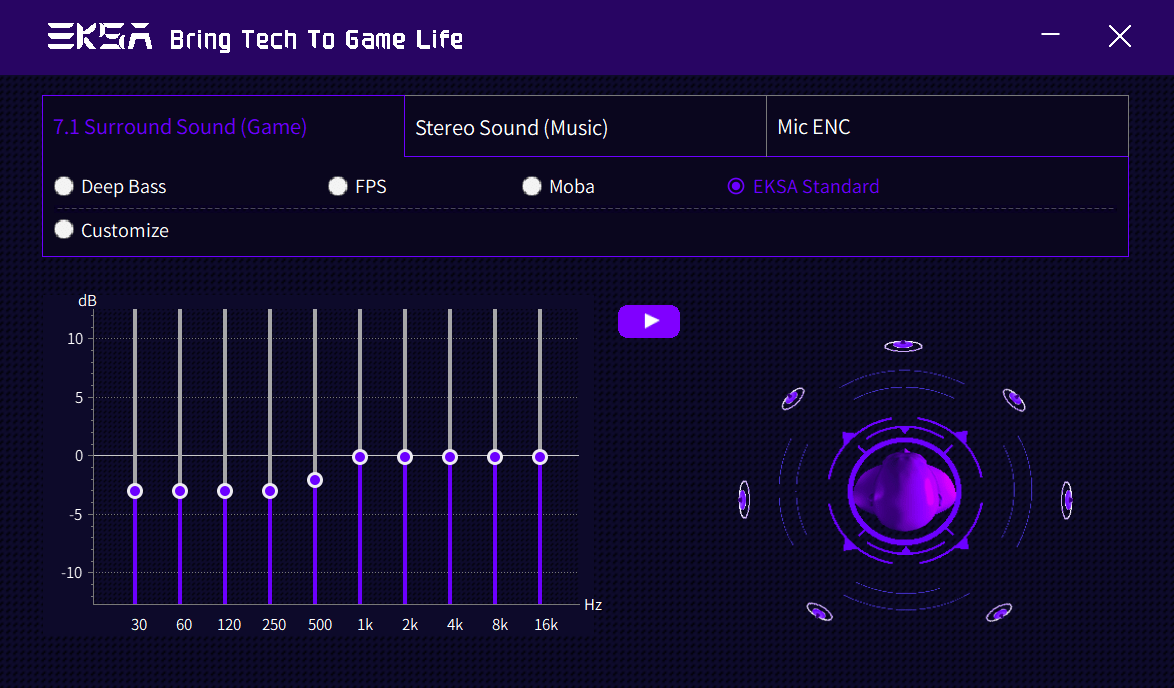 Finally, let’s talk about software. The Star Engine E5000 Pro can be used without EKSA’s propriety software (which can be downloaded via a link on the official website) but having it on your PC is a must.

While it may seem like simple and rather bare-bones software, the E5000 Pro’s software is actually useful and easy to use. With the software, you can tweak the audio settings through several audio profiles, both for the 7.1 virtual surround sound and standard stereo mode. And if you want to fine-tune the audio output, you can even make your own profile via a graphic equalizer. While this isn’t exactly a new or groundbreaking feature, having software with a graphic equalizer is welcome for an affordable gaming headset. 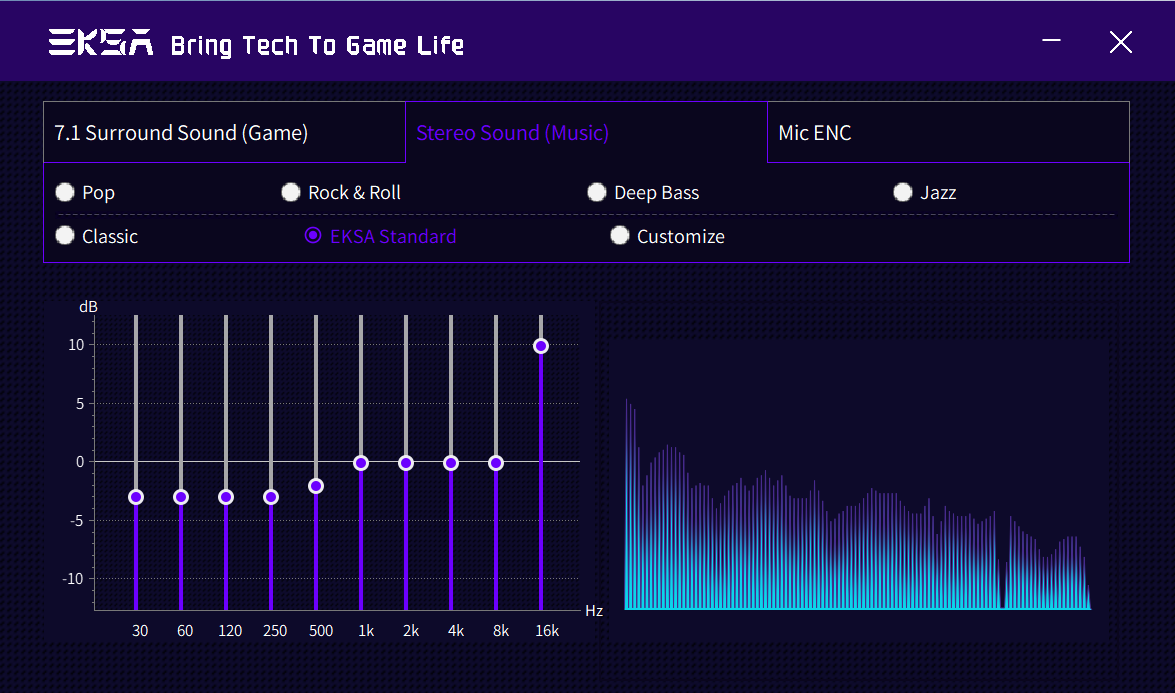 In my use, I found the audio profile settings and equalizer to be great as the standard audio profile without the software was a bit too boomy and dark-sounding for me when it comes to music listening. But with the software, I was able to select a more treble-forward sound signature that was more to my liking. I was then able to use this preset and tweak it a bit more to better match my audio preference. While not a pair of audiophile headphones, the software helps make the E5000 Pro surprisingly good for music for a gaming headset. 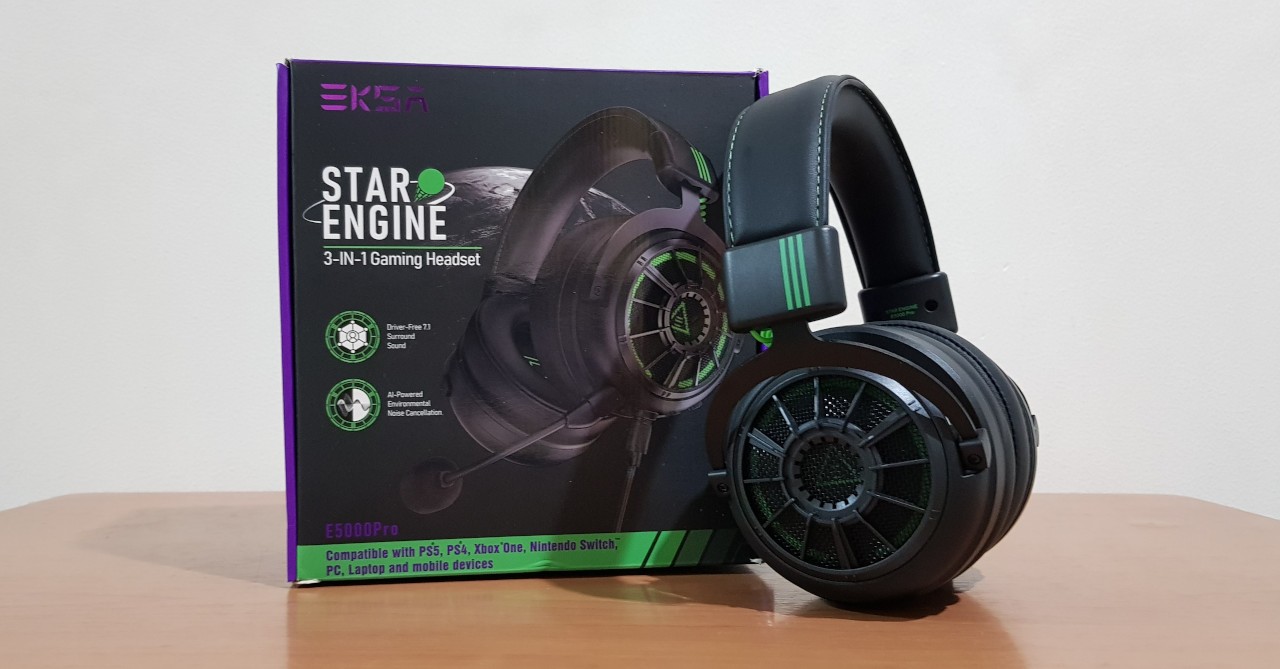 The Star Engine E5000 Pro is available now via the official EKSA website for just under PHP 4,000.