A lucky winner will get this special Xbox Series X! 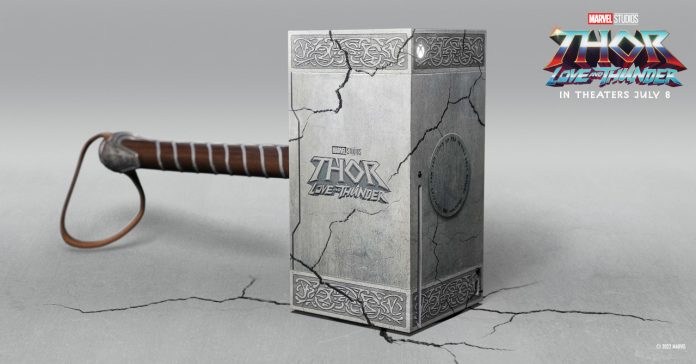 Microsoft just announced a special giveaway where a custom Thor Love and Thunder Xbox Series X console is up for grabs!

This custom Xbox console is styled after Thor’s signature weapon, Mjolnir. Specifically, the custom Series X comes in a stone gray color and a look that’s taken straight out of the MCU Mjolnir. Aside from the Thor: Love and Thunder logo on the side, the most striking thing about this Xbox Series X is the unique handle that makes it truly look like Thor’s hammer.

While you may be tempted to try and swing this Xbox around like a hammer, we recommend that you don’t. After all, this custom Xbox is one-of-a-kind, and to get it, you’ll have to get lucky.

The Xbox Series X is looking a little different after a bit of love and thunder.

Follow @Xbox and RT with #ThorLoveandThunderXboxSweepstakes for a chance to win this epic Mjolnir-themed Series X. Best of luck!

Microsoft is giving away this special console to one lucky fan. To join the giveaway, you’ll need to follow the Xbox Twitter page and retweet the post above with the hashtag #ThorLoveandThunderXboxSweepstakes. Based on the official Terms & Conditions though, only those who live in Xbox console supported regions. This means Filipino Xbox players won’t be able to join.

Thor: Love and Thunder will release in cinemas in the US on July 8. Meanwhile, the movie will release a bit earlier — July 6 in the Philippines.

This isn’t the first time that Microsoft collaborated with an upcoming movie. There’s the special Sonic-inspired Xbox Series S that was also given away back in March.