Hatsune Miku: Project DIVA Mega Mix+ is on sale for up to 30% off

Get a big discount on Hatsune Miku: Project DIVA this week. 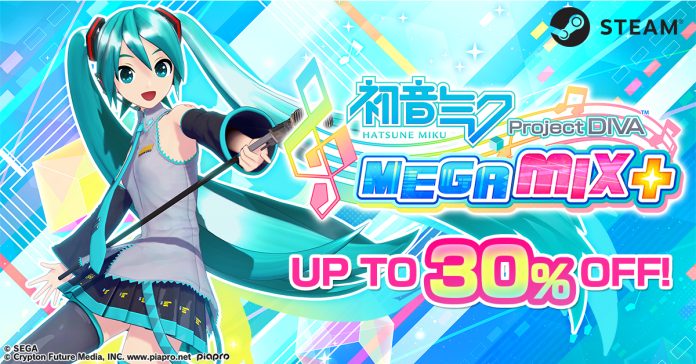 Following the game’s release back in May, SEGA has announced that Hatsune Miku: Project DIVA Mega Mix+ is available on sale, with a discount of up to 30% off.

Specifically, the PC edition (Steam) of the new Hatsune Miku rhythm game is available with 25% off for the Standard Edition and 30% off for the Digital Deluxe VIP Edition. This special offer is available now until Friday, August 5, 2022.

The new Project DIVA game features over 170 songs, including those from the game’s Switch version. With the VIP edition or the Extra Song Pack DLC, players will get to play over 240 songs.

On top of these, the PC version of the game will let players watch 3D music videos in either the anime-style or the CG-style (this is exclusive to the PC version).

“Take center stage in Hatsune Miku’s premier rhythm game starring the world’s #1 virtual pop star! From a stunner setlist of songs to an enormous wardrobe to style, this is the ultimate tour with Hatsune Miku, Kagamine Rin, Len, Megurine Luka, MEIKO, and KAITO—all it needs is you.

Start by choosing a song, then tap and hold buttons at the right time with the icons on-screen. It’s simple to grasp, and challenging to master. Vibe with the music videos on Easy or aim for a high score on Extreme! Button inputs can be configured to harmonize with playstyle and accessibility preferences, supported by Steam-compatible controllers.”

You can get Hatsune Miku: Project DIVA Mega Mix+ now on PC via Steam.