You should totally watch it if you haven't yet! 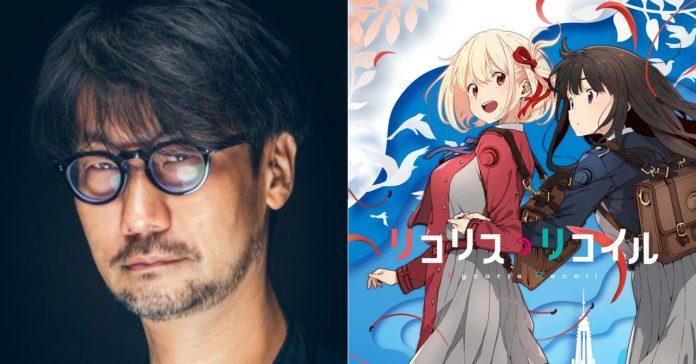 Hideo Kojima recently revealed that he likes Lycoris Recoil, an original anime series by A-1 Pictures that premiered last July.

If you follow Kojima on Twitter, you should already know that the Metal Gear and Death Stranding creator often shares the movies and shows that he is enjoying. Among the newest shows that he shared on Twitter is the anime series, Lycoris Recoil.

Specifically, Kojima shared a few days ago how we watched the fifth episode of the series and how he pondered about visiting Asakusa again (Asakusa was the primary setting of episode 5).

Come to think of it, I haven't been to Asakusa for a while.

I'll be back next week to control the recoil. pic.twitter.com/LT95WSZ0Ev

In his Japanese Twitter account, Kojima mentioned Lycoris Recoil as early as late July. There, he mentioned how he stumbled upon the series while browsing Amazon Prime Video.

While he was initially shocked by its unique premise, before he knew it, he watched all three episodes that were available at the time. And with that, Lycoris Recoil has a high-profile new fan!

In case you’re unfamiliar, Lycoris Recoil is an original anime series by A-1 Pictures (meaning it’s not based on manga or a light novel). The series is set in an alternate version of Japan where criminals and terrorists are taken down by “Lycoris” agents. These Lycoris agents work under the DA, and they are all-female assassins and spies.

Takina and Chisato have opposite personalities, but Takina must get along and work together with Chisato if she wants to get her old position back.

Hideo Kojima being a fan of Lycoris Recoil is a bit surprising, but it does make some sense. After all, Chisato is a powerful agent that chooses to use non-lethal guns with rubber bullets — a familiar sight for Metal Gear and Death Stranding fans. Plus, the unique setting does make it an interesting anime; after all, Kojima is a man of eclectic taste.

Lycoris Recoil airs every week in Crunchyroll in the West and Aniplus Asia in SEA.