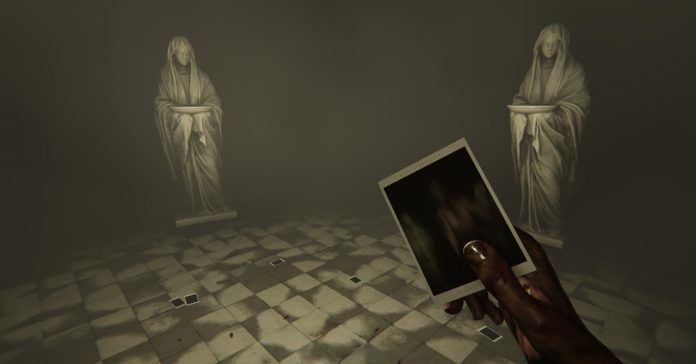 As someone who can barely handle any form of horror (yet I’m still continuously fascinated by it) whether it be film or video games, Madison did exactly what I expected from it: scare the sh*t out of me.

It has all the classic tropes. Abandoned houses, head-scratching puzzles, a dark family history, a serial killer murder mystery, malevolent demons, and rituals that have gone terribly wrong.

The story and the mechanics aren’t anything groundbreaking. We’ve seen all of these before. But, what makes the game stand out is in its execution. While it may not be perfect, it certainly keeps you on the edge of your seat at a constant pace. I’ll tell you this: MADiSON is not an easy experience to get through, and that’s precisely why it’s so good at what it’s trying to do.

You play as Lucas, a 16-year-old who suddenly gets thrown into the mess of his family’s past and a demonic entity that wants a dark ritual completed. Along the journey, you’ll also be discovering the story of Madison Hale, a witchcraft practitioner. I don’t need to say anything else for you to know how it ends up for her. It goes about as well as you’d expect.

The story isn’t anything special. In some cases, it might even feel just a little bit too disjointed from one another. It doesn’t help that Lucas sounds like he’s on the verge of a breakdown in every single line. To be fair, he is in a haunted house, trying to solve God knows how many cryptic puzzles, all while trying to avoid killer demons. All that being said, the voice acting was more distracting than anything else. I’ll go as far as to say it’s even worse than Ethan from the recent Resident Evil titles. The developers themselves probably thought the same as you are given the option to disable any and all audio voice lines and just rely on the subtitles.

What the game lacks in narrative strength, it gains back with its presentation. The horrific atmosphere in Madison had me sweating in fear at almost every corner. The look and feel of the entire game have clear inspirations from P.T. Understandably so, that took the entire horror game community by storm and it was just a teaser of what was supposed to come. Even though Madison doesn’t quite reach the same levels as Kojima and Del Toro’s work, it’s still guaranteed to just make you say “nope” and pause the game, or leave it altogether. I know I did. Many times.

Dark corridors, tight corners, and a variety of secrets to be found are all elevated by the top-notch sound design. Every creek of the floor, tap on the walls, soft swinging of every door, and a distant sound that makes you wonder if it’s just the wind or as if someone or something else is following you within the premises all sound horrifically fantastic.

A lot of the areas barely have any light source to help you see what you’re looking at. Most of the time, you’ll only have to rely on the flash of the polaroid camera that you are given at the start of the game. This camera is your lifeline and simultaneously causes a few heart attacks here and there.

Developer Bloodious Games does a few clever tricks with the lighting in Madison. They especially play around with the fact that you’ll only be having a split-second flash of light from the camera every time you take a shot. One moment you think you’re just staring at a random wall or dark corridor so you try to take a picture. The quick flash suddenly reveals that something is staring at you from a distance, if it wasn’t already coming towards you, or at worse, is already inches away from your face.

I’m having goosebumps right now just writing about it. There are multiple moments like these sprinkled throughout the game. The scares just keep getting ramped up the more hours in with each one trying to be different from the other. It doesn’t always succeed (especially with the latter part getting a bit too carried away with the multiple jumpscares) but it was still a massive worry at the back of my head throughout the entire playthrough. The amount of jumpscares in this game makes Madison a streamer’s delight. I can already imagine the amount of jumpscare reaction compilations being made.

Given that Madison is a psychological horror game, Bloodious Games had a little bit more freedom in terms of how trippy they can get with the scenarios they present. There are plenty of clever moments in the game that are perfect examples of how to build up tension and dread for the player. Combining game mechanics, immersive visuals, and visceral sound design for the scares had me stressed out of my mind. An early scene in a basement area stands out in particular. Don’t look it up. Trust me, it’s worth experiencing for the first time.

Fear of the unknown

Other than exploring and taking pictures, a large chunk of the game is also dedicated to puzzle solving. While there are a few that had me going “ooooh, that’s kinda cool”, there were more than enough times where I was saying out loud “this is absolutely ridiculous.”

I’m all for being mysterious and challenging when it comes to horror game puzzles but there has to be a line drawn between cleverly crafted and downright sadistic levels of cryptic. I’m talking Dark Souls lore levels of figure-it-out-lol type of cryptic here.

Just to give a fictional example. Imagine a door requiring a key. You search the entire room, possibly the corridor outside, or make even the nearby rooms in the area as well and you can’t see anything. After a while, you find out another item that has nothing to do with a key or a door suddenly has a small engraving at a corner that you have to zoom into which reveals the location of a hidden path that bypasses a door. And note, this was an item you picked up at the start of the game and now you’re in hour seven or something.

It’s those moments where the game just wants you to suspend your sense of disbelief so much to the point that it becomes absurd. I don’t know what was scarier, the malevolent demon hunting you in a dimly lit house or the developers thinking their puzzle design was intuitive and logical. At least, the puzzles had a good amount of variety. In that sense, Madison gets a pat on the back.

One other thing, there’s a LOT of camera swinging happening in the game. Lucas walks like he took one too many shots and is trying to make his way to the bathroom. It gets worse as well if you try to run. There were a few moments when I had to stop playing and rest my eyes for a bit. If you are someone who gets easily motion sick, Madison might not be the game for you.

Despite its flaws, Madison is still something I would recommend to horror fans. There’s a good amount of tension-building and puzzle variety in here to keep you engaged for a couple of hours. It’s not even that long of a game. It’s a well-made 8-10 hour experience that is tightly designed to make sure you do not feel safe at every turn of a corner. It’s all the more impressive that Madison was developed by a very small team. It was clearly a labor of love from horror fans for horror fans. Madison is a game that felt like it had passion behind it and it shows in the final product. Just make sure that you are able to play this type of game. This is definitely not for the faint of heart.

This review was made with a MADiSON review code for PS5 provided by the publisher.

Previous articleWill Valve’s Steam Deck be available in the Philippines in 2022?
Next articleBandai Namco teases the next Tekken game at EVO 2022

MADiSON Review | Taking a Shot at Modern HorrorMADiSON is a great horror experience that will make your skin crawl, your heart pounding, and your eyes and ears begging to be covered. Developer Bloodious Games does an amazing job at building up tension through simple game mechanics and immersive environments. While some of the puzzles could use some tweaking, the game is still technically impressive and terrifying in all the right ways.