This impressive Guts statue will release next year. 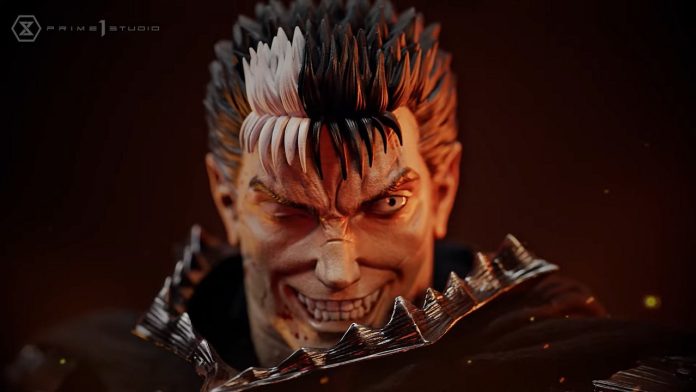 Prime 1 Studio revealed their latest masterpiece work last weekend, unveiling a four-foot-tallStudio statue of the Black Swordman Guts from Berserk clad in his Berserker Armor and wielding the Apostle slaying sword, the Dragon Slayer. But those willing to buy this well-detailed statue must pay the price of sacrifice.

“The soul is inherited, the legend never ends. The long-awaited serialization of Berserk has been resumed by Koji Mori, who inherited the will of Kentaro Miura, and Studio Gaga. And here too, work was born in which Mr. Miura’s soul resides. Guts, who possessed the armor of a berserker, finally appeared in a big size in its “liberated” form! The appearance of Guts wearing cursed armor has been lined up in the works of Prime 1 Studio so far. This time, in order to give a deeper modeling expression, a 1/3 scale figure with a total height of 121cm …”

The Guts Berserker Armor Unleashed Edition will come in two versions: a standard edition and a DX edition. Both stand menacingly with a 1/3 scale and come with a standing base detailed with corpses of butchered monsters that can light up thanks to its LED.

Meanwhile, the DX edition will come with exclusive extra parts, including two swappable heads and two additional swappable arms. It is not only big, but it is also a heavy boi as the statue weighs 62 lbs, so you better have a sturdy desk or cabinet to support that weight.