The M4 World Championship is happening this January in Jakarta, Indonesia

M4 is official, and it's happening this January! 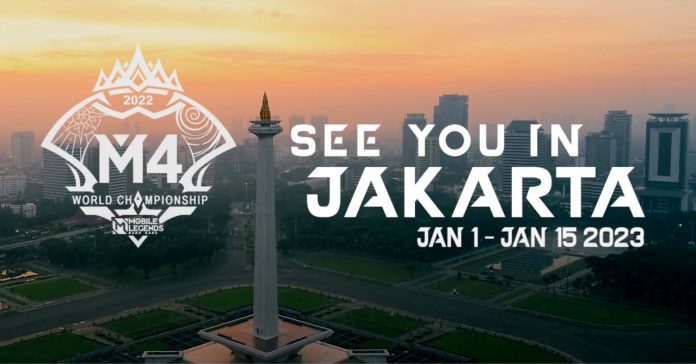 Following M3 which happened last December in Singapore, the Mobile Legends: Bang Bang World Championship (M4) has been announced, and it will be held in Jakarta from January 1-15, 2023.

The next Mobile Legends World Championship will feature 16 international teams as they face off and fight for the lion’s share of the USD 800,000 prize pool.

Meanwhile, here is the list of participating countries at the upcoming M4 event:

Indonesia has one of the biggest Mobile Legends fanbases in the world, and its esports landscape has grown massively over the past years.

Recently, season 9 of the Mobile Legends Pro League in Indonesia hit a peak concurrent viewership of 2.8 million. Plus, MPL Indonesia was the first esports league to implement the franchise system in the country, along with the highest prize pool of USD 300,000.

In total, the Mobile Legends esports scene has produced over 300 local pro players and talents.

More details on the venue and ticketing for the M4 World Championship will be announced soon. Though it’s confirmed that fans can expect in-game activities and on-ground campaigns.

- Advertisement -
Previous articleWin up to ₱50,000 by joining the Shopee Ultimate Case Challenge
Next articlerealme to launch its latest line of AIoT devices on August 26