Among Us x Hololive collaboration is now live until December

This new Among Us collab brings 10 Hololive-themed cosmetics! 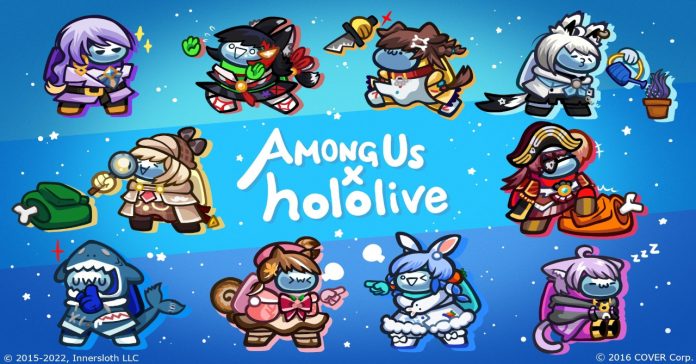 The Among Us x Hololive collaboration is now live in the game’s version 2022.9.20 and it comes after it was teased by both Hololive and Innersloth last week via their official Twitter page.

Holo Myth’s Amelia Watson or more specifically Smol Ame of Hololive English made the official announcement through her channel that the new update is now live.

Our new Cosmicube collab is out!! Hop in the game to find some of your new fav cosmetics, featuring:

This collab will bring a new Cosmicube in the game that contains cosmetic items based on the ten featured Hololive talents; namely Pekora, Marine, Fubuki, Mio, Okayu, Korone, Risu, Moona, Gura, and Amelia. The only weird part that I see in this collab is the lack of Suisei, which I think is a missed opportunity as the “idol” is known for her ruthlessness when the occasion rises.

Cosmetic items that players can unlock through the Cosmicube are listed below:

Players can mix and match the items gained from the Hololive Cosmicube and it can be purchased for 110 Stars. The Among Us X Hololive collab is live until December 20, 2022.

If you’re interested in collecting these limited-time cosmetic items, download Among Us for free on your Android and iOS devices. The game is also available on the Xbox, PS4, PS5, Nintendo Switch, and PC.