Will Burn x Flash make it to the Finals? 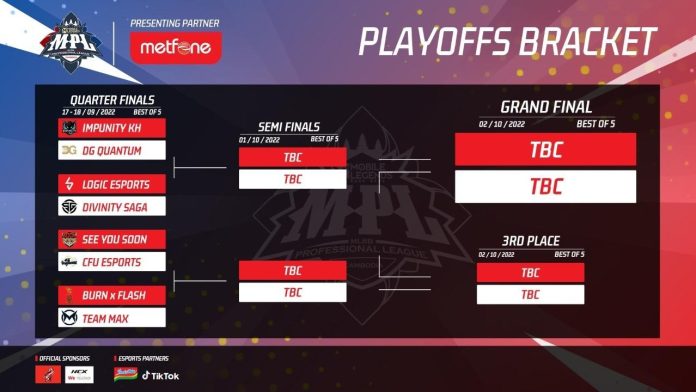 Outstanding Cambodian teams continue their quest to conquer the top position as they proceed to the MPL-KH Autumn Split Playoffs Season starting last September 17, 2022. The teams have been competing to take home the coveted title and a lion’s share of USD 40,000.

Impunity KH and DG Quantum are opening the quarter finals in a best-of-five series. Logic Esports will duke it out with Divinity Saga for a chance to fight in the semi finals.

Burn X Flash, the team that has Filipino imports, is set to open their playoffs campaign in a best-of-five series against Team Max for a top 4 placement. Just this week, the team won the WOWNOW & Prince Mall League (WPML) title besting two former MPL Cambodia champions. The team is led by Filipino coach John “Zico” Dizon.

“The unpredictability of the outcome of the playoffs further shows how the MPL Cambodia has elevated its competition level. We hope our fans continue supporting their idols, especially now that the M4 World Championship is just around the corner,” says Ray Ng, MOONTON Games esports ecosystem lead.

MPL-KH launched an online campaign to futher bring fans closer to the teams they actively support. Starting today until 2 October, fans can accomplish MLBB-related tasks on TikTok and get a chance to take home cash and MLBB rewards as much as 20,000 in-game diamonds. This is also MPL Cambodia’s way to thank its community.

The Semi-finals is scheduled on 1 October followed by Championship on 2 October. Top 2 teams will represent the country to the upcoming M4 World Championships which will take place in Jakarta, Indonesia. They will compete with 14 other international teams and vye for the prestigious championship title.

MPL-KH is supported by brand partners to ensure an outstanding-level tournament. This season, leading local mobile operator Metfone joins as the presenting partner. Renowned automobile manufacturer Honda is now part of the official sponsors alongside Sting. The energy drink maker will provide chairs and beverages for the players.