Swinging wildly into the night 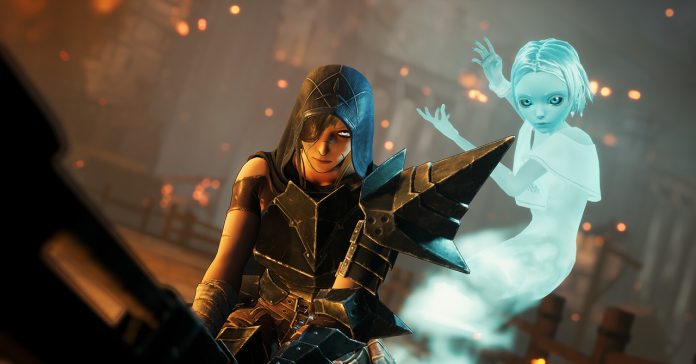 Contrary to what the title may suggest, Soulstice is not a soulslike game. It’s an action hack & slash adventure similar to the likes of Devil May Cry and the original God of War trilogy.

Does it have the same quality and polish those aforementioned games have? No. the only thing that Soulstice has going for it is a somewhat enjoyable gameplay system that is ultimately lost amidst a bland world and less than stellar storytelling.

You play as Briar, a Chimera warrior who is accompanied by the soul of her deceased sister, Lute. They are tasked to investigate a massive storm that is wreaking havoc on everything it touches. A world plunged into darkness, structures destroyed, and life corrupted into horrific creatures all sound like your typical elements of an apocalyptic narrative. That’s because that’s exactly what Soulstice has. A very been-there-done-that type of story filled with predictable beats that all seem so flat in their executions.

The game is roughly 20 hours long and not once in that runtime was I ever invested in what was being told. The lack of interest started as soon the campaign was kicked off with a long and tedious exposition dump about the world and its backstory. It was one of the worst offenders of the “show don’t tell” philosophy. Imagine your history teacher going on and on about the lesson without showing any form of visualization.

All Soulstice gave was a long-take shot of a static art piece that vaguely represented what was being narrated. An extremely poor way to start a brand new IP that no one knows anything about. I wish I could say the storytelling gets a bit better as you progress through the story but unfortunately, that’s not the case. 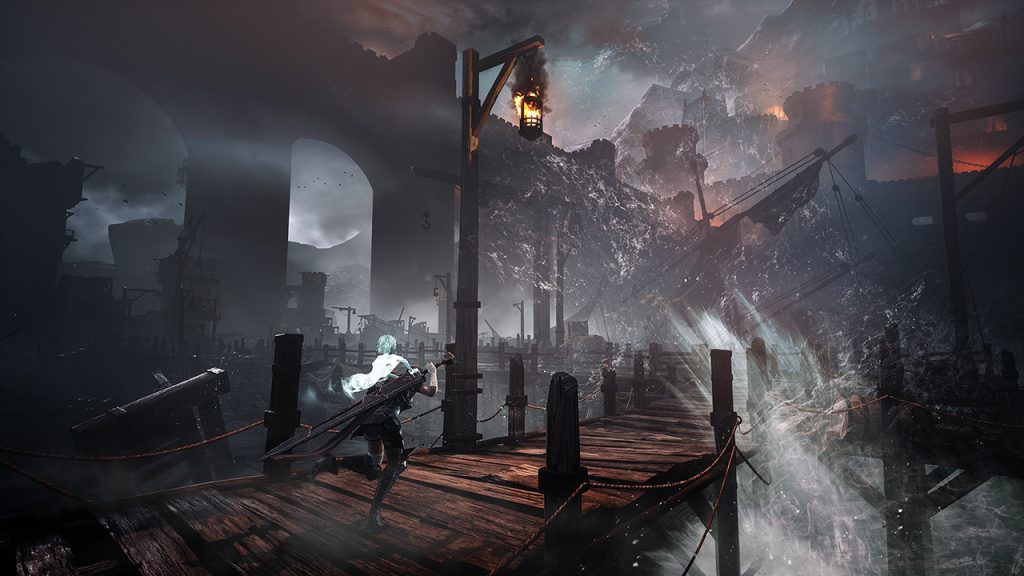 Visually speaking, the city of Illdan is on par with the quality of the narrative. Unexciting at almost every turn. To be fair, there’s only so much you can do in a dark apocalyptic world. But, you can only see so much of the same brick walls, dilapidated buildings, broken bridges, and post-chaos rubble with the same color palettes till you start to think that maybe you’re just going around in circles. Save for some of the latter levels near the end of the game, most of the environments in Soulstice aren’t anything to behold. There are some impressive vistas and background imagery at the start of the adventure but as soon as you get into the interiors, it’s all downhill from there.

However, enemy designs are a stark contrast to everything else. The visual architecture of their corrupted forms is unique and eye-catching. Just to paint a picture: one of the bosses you will fight is a giant head that turns into a huge monster. It’s obvious that this is the area of the game where the artists really had fun in. I only wish they had the same imaginative design philosophy for the rest of the game.

Even Briar and Lute look great in their own right. There are moments in the story where they are being dragged into the same fate as the creatures they’ve been fighting. Their corrupted versions are admittedly cool to look at. These are also moments where you most feel the bond between the two sisters and just how much they care about each other.

Briar is a stoic warrior who is all business while Lute is the younger companion who’s always worried and almost has a melancholic fascination with the world around her. Their back and forth during exploration segments and cutscenes are a definite highlight. 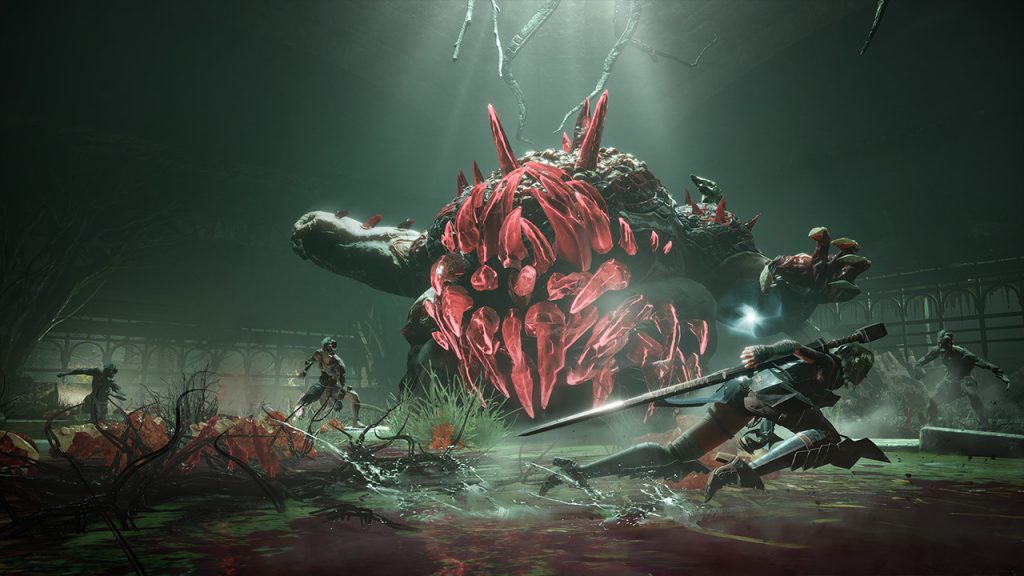 Speaking of exploration, all you’re really doing is going from one battle area to the other. In between those, you’ll be smashing glowing debris to earn red orbs for upgrades, doing minor platforming, finding collectibles, and solving puzzles that are more tedious than they are challenging. It all feels so outdated in its design and something which all of us have done in an old game back in the day.

Linear stages are only bad when the level design does nothing to shake things up or keep things interesting. There are times when there are other areas you can go to in order to initiate certain challenges that give rewards once completed but these felt more like a chore rather than a neat little extra in the latter half of my playthrough.

The one saving grace of Soulstice is in its frantic combat sequences where Briar dishes out the pain with a variety of weapons that look and sound cool while Lute acts as a dependable companion that helps your defensive capabilities. As you progress through the game and earn enough resources, you’ll be able to purchase new combos and abilities that will spice up the combat even more.

Admittedly, there is a bit of a learning curve at the start which made the combat sequences less fun to play. Attacks lack the proper firepower which made enemies into annoying punching bags that take up far too many hits, tutorials were a bit unclear in their instructions which made moves like stunning and countering (which are both using the same button) confusing to pull off.

Once you get the hang of the core combat systems, you’ll be having fun stringing together different combos and transitioning between weapons. You will need to do either way if you want to build up the “unity” status for Briar and Lute. If this is achieved, the player can either perform synergy attack combos that are weapon specific or activate rapture state which buffs damage, movement, and defensive capabilities. It’s all great stuff.

Lute can summon two different energy fields: evocation and banishment which are represented by blue and red colors respectively. How long you can activate these will be limited to Lute’s entropy which is painfully short at the start but will eventually get better. You’ll be needing this in both combat and exploration as some enemies can only be defeated if within a specific energy field and certain pathways are blocked by special crystals that won’t be broken by normal attacks. This adds a nice layer of variety that keeps things fresh every now and then.

The worse enemy you’ll be encountering is the camera system during combat sequences. A lock-on mechanic is present but if you don’t use it, the camera will stay in one direction unless you move it with the right stick. Not an ideal scenario considering that you’ll be busy trying to keep track of the enemy’s moves while trying to pull off your own. The screen will get crowded and busy. Prepare to have both your mind and your controller on overdrive. 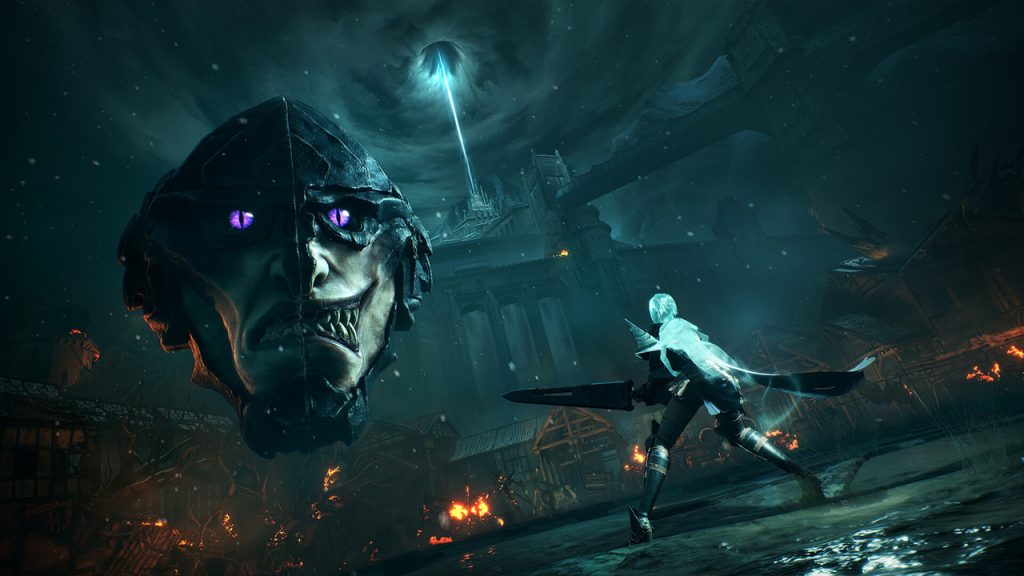 While Soulstice didn’t quite capture me with its mediocre storytelling and uninspired level design, it still has a few interesting gameplay systems that make up for the lack of spectacle outside the combat sequences.

Fans of old hack-and-slash adventure games will be able to find enjoyment in Soulstice. Briar and Lute bounce off of each other about as well as you would expect with two sisters trying to fight hordes of monsters.

If we were to judge Soulstice on just gameplay alone, it gets a lot right. Other than that, it’s your typical action-adventure experience that was probably experienced many times before in much better ways.

This review was made using a game code for the PS5 provided by the publisher.

Soulstice’s excellent combat system singlehandedly saves the game from its own mundane presentation, technical problems, and uninteresting narrative. If you’re looking for an old-school action-adventure game, this might be worth a pickup.Soulstice Review | A Soulless Experience