Adidas is adding new pieces to its Yu-Gi-Oh collection! 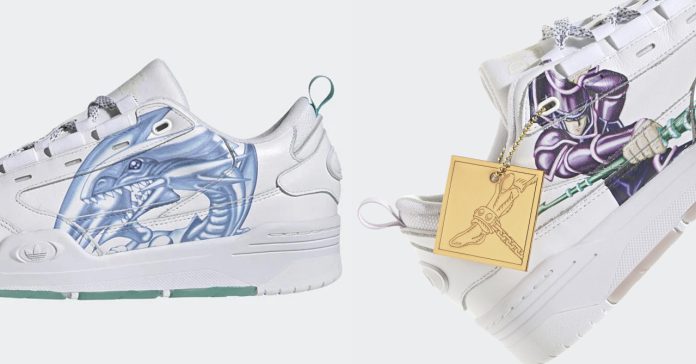 The first item in the collab was released last August in the Philippines. Now, several sites have shared (including Modern Notoriety and Comicbook.com) images of three new pieces in the latest Adidas lineup.

These three include another pair of Reptossage Hook-and-Loop slides, as well as two ADI2000 sneakers

First up is a pair of ADI2000 sneakers in white with a mostly white color with a big print of the iconic Blue-Eyes White Dragon on the sides. The sneaker also packs an extra set of laces, the Kaiba Corporation on the tongue, Yu-Gi-Oh card-styled insoles, and a special box with Seto Kaiba printed on it.

Next is another pair of ADI2000 sneakers inspired by Yugi’s Dark Magician. It shares a similar look to the Blue-Eyes version, but with a Dark Magician print on the sides and a Millenium Puzzle print on the tongue. Its box also features Yugi instead of Kaiba.

All of these footwear also come with a special tag featuring one part of Exodia. Given that there are four already, it’s possible that another pair of sneakers or slides will be released soon.

Right now though, there’s no word yet on a release date for the Adidas x Yu-Gi-Oh collection.

In case you missed its, the first item in the collab is a pair of Reptossage slides which was released only in the Philippines. Check it out here: